All around the globe polo is condemned for its ill-treatment of horses without proper knowledge of the sport. Polo is the only game where horses are treated better than any other sport. They have a longer and happier life than the usuals.


If you want a home for your horse, consider taking them to polo farms, for it is there where they will be bred well and taken care of. The Equine sport has faced judgement over years by people without actually having knowledge about the sport. POLO PONIES AREN’T MISTREATED. Polo has kept things very conservative and inconspicuous, trying to maintain the same sense of elegance and morality. Polo is not benefited nor are the players, neither commercially nor technically.

They are provided with the best possible feed, supplements, electrolytes; they are assigned “grooms” that check on them continuously throughout the day, keeping their water supply full, bathing and grooming them every day, checking their entire body for any issues, stretching them carefully daily, walking them and so forth. They are exercised daily to keep in the best mental and physical state as well, so that when it's time for a polo match, they are at ease.The horses are compact in their build, and are bred for their speed and quickness apart from which the priority is the upliftment of their stamina and soundness. Polo horses have a life longer than the normal horses in general. Polo is a sport which is family oriented- the trainers are popular for their eventer’s, hacks, train riding and sometimes dressage. The Equine is a world of compassion and persistence, which not just is applicable to the polo professionals, but is mandatory for horses. Also, the horses are more than happy to be on the field, for in no way a horse was meant to be kept in stable tied up. Horses are known for their speed and strength and their mistreatment is nothing more than just a cacophony that is based on irregular facts.

HOW DO HORSES COME IN THE POLO GAME
No! They are not pulled out of the stables and forced to play on the field. They are not whipped to run in the direction of their riders and the are not malnutritioned. There is a procedure that every horse follows before playing a polo match. Some horses come into the play at a very young age while some takes a few years to be a part of the game. It totally depends on their stamina and capacity. Most polo players live in the environment of horses since birth. They have their own horses and are accustomed to the behaviour of their respective horses. The very first step to any horse is its medicaL test if it is completely fit for the play.

“Every horse has its own Identity card where it is marked by its age, name, colour and the identity is scanned by its footprint and eye scan”- said the horse caretaker of Jodhpur in our interview in Delhi.

Surely you mustn't know about this! Well, yes horses beyond your expectations are taken well care of. 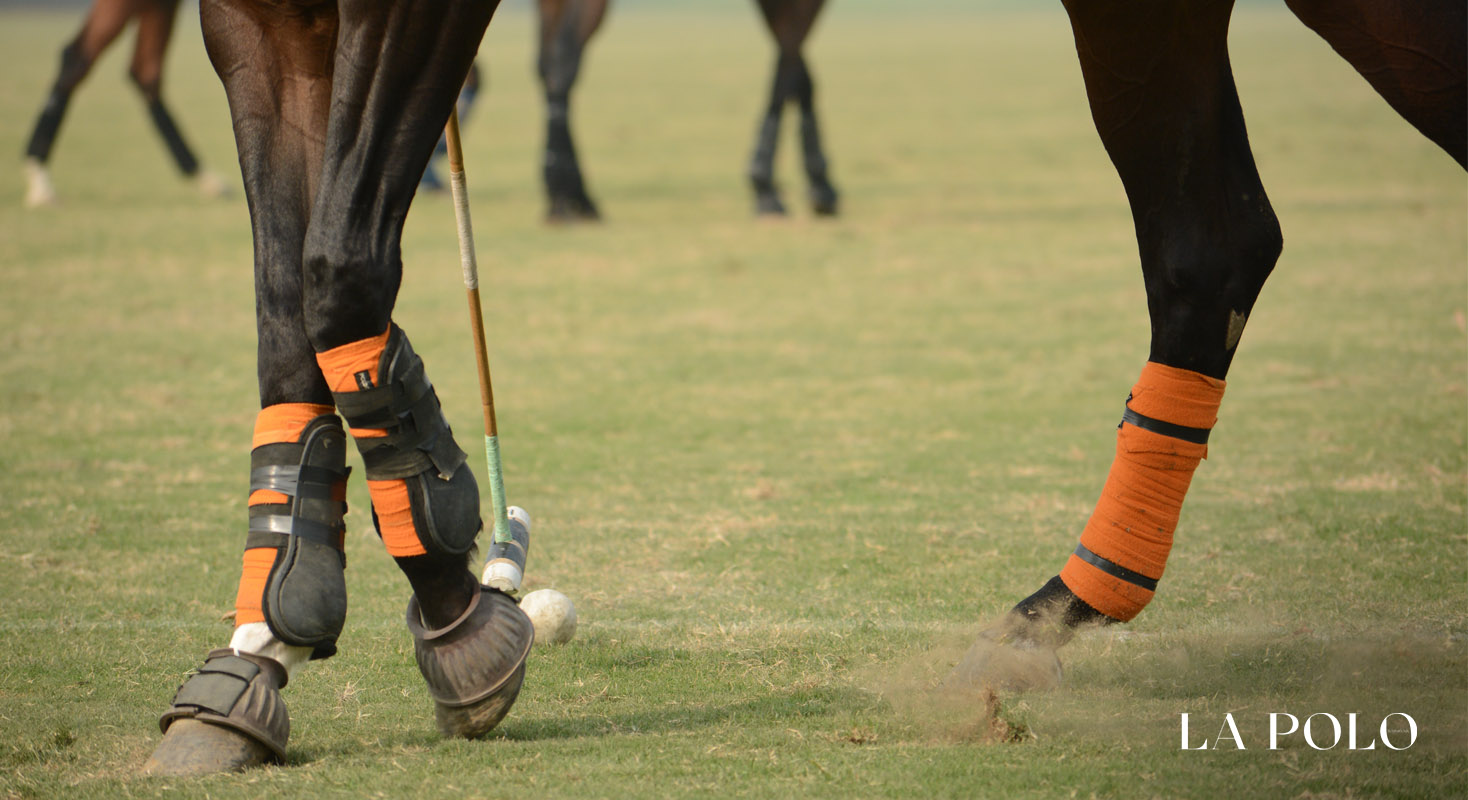 They are first taught how to roll, trodd, canter and gallop that are very basic steps every horse knows how to perform. Secondly they are made to turn back, forward, take an about turn, changing the legs and other similar activities which would help them in the game to follow the instructions of the rider. Slowly the horse is trained riding and the first step in the playing of the game is, it is made to play in the chukkers, small games of 2-3 minutes and hitting. Finally the horse is made to play in the game. Polo horses undergo regular exercise, they are given proper schooling where they are given warming up and proper massages.You cannot just expect a horse to come out of the stable and start running. Horses don’t just behave like that and apparently it's unnatural for a horse. In any game the horse contributes 60 to 75 percent of the winning and losing, therefore every polo player keeps in mind its performance, thereafter, its nurturing. 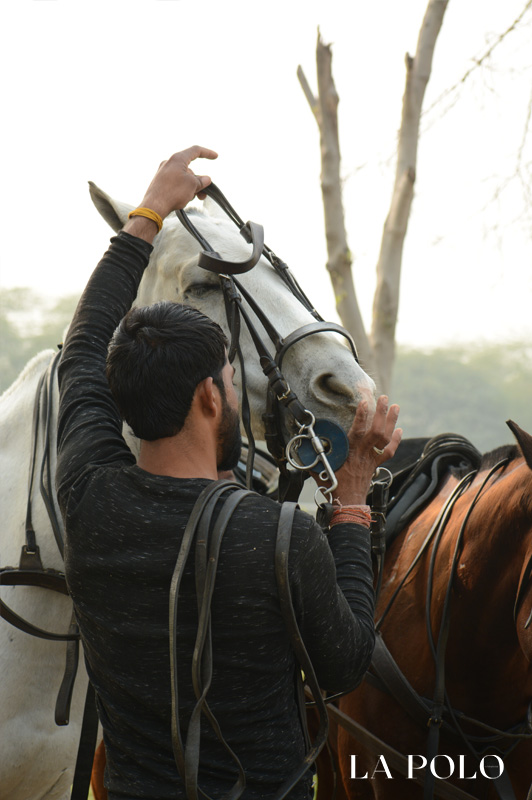 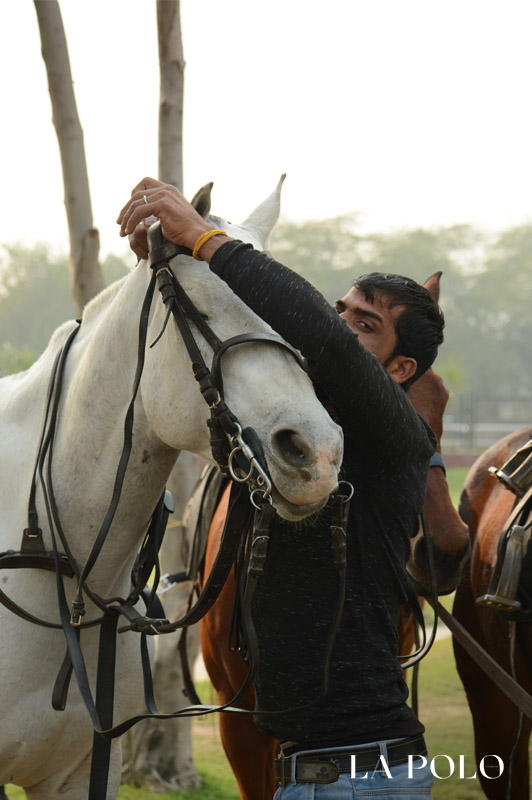 Polo ponies are extremely well bred their genes are literally flawless and they rarely get injured. They are handled and trained with the utmost care, love, and passion. They enjoy what they do and since they are so healthy they often play well into their twenties. Horses are on sale only when they get too old or their capacity to play decreases after which they are sold to pastures. Every rule of the game focuses on protecting the pony. If a horse is whipped it does not stop. Whipping a horse actually helps him regain its strength. Obviously, repeating the above might result in hurt, but polo riders are compassionate towards their horses and they cannot do it. The ponies are changed after every chukker to put less strain on them. They are fed well and four times a day.

HORSES HAVE THEIR OWN AMBULANCES! Teams retain equine veterinarians to pregame evaluate each polo pony. The veterinarian will draw blood, inject the joints, recommend chiropractic spinal adjustments, acupuncture, vitamin regimes and so on. They have multiple professional “cooling stations” off of the field just for the horses. Just so you know that if any horse gets hurt while playing, it's not left on the field to die. There are doctors and caretakers for horses that are immediately called-off in case of any injury. In every polo game, there is an ambulance at the site. Horses are not forced to play after the injury. As soon as any failure in the horse is noticed the rider stops playing and changes his/her pony. A horse is often communicative. If a horse is restless, changing its position in a jiffy and refusing to follow its rider, it is certain that there is some problem. 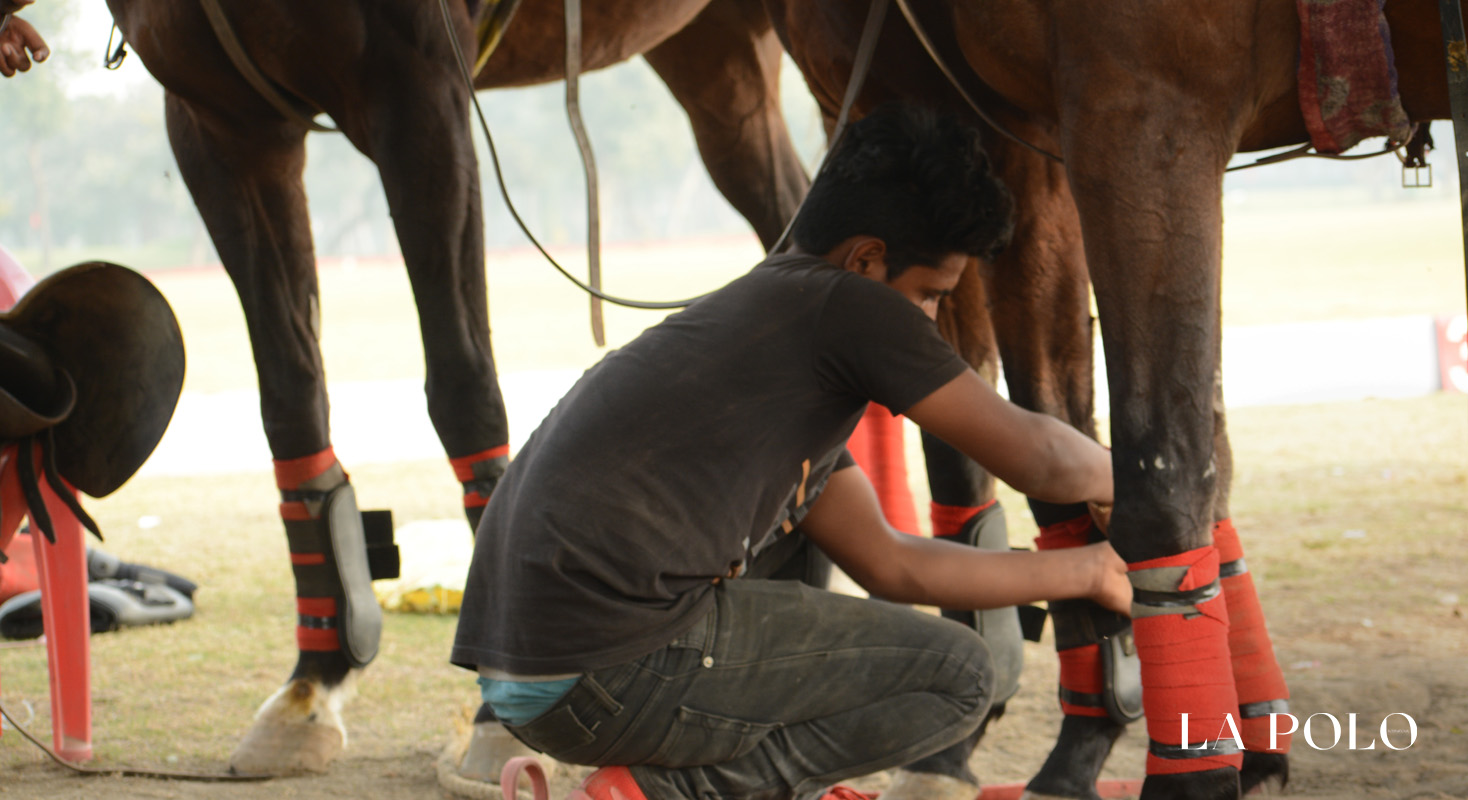 There are regular checkups for horses and the use of drugs and performance enhancers are strictly prohibited in the game. If a horse plays too much on the field it might dehydrate and there can be retention of urine. The horses wear polo wraps and tail wraps, and have their manes roached off during competition season to prevent accidents involving tangled reins. The psychological and mental pressure of a horse can be checked by recording its temperature, pulse rate, and respiration. Usually, painkillers are provided in case of any hurt. Usually, polo ponies are happy with their treatments. The horses are draped with a bandage below knees accompanied with stuffed pads so that they don’t get hurt. Teeth rasping is done yearly and sometimes twice a year to help them chew their food properly. Special care and points are noted before taking a horse on the field. In India, horses are given a special thing to wear on their feet which helps them prevent from ‘nazar’ (the evil spirit). This practice is prevalent in India since long and everyone loves to take care of their precious people and so does the rider of his/her horse.

Just like any other excessively credulous belief and reverence for the supernatural, according to some beliefs on the land of the sacred country India, horses are treated and worshipped to be heavenly creatures.

While interviewing the caretakers in Delhi we came across such ideology toward horses that made us awestruck.
As per the belief, the horses are supposed to have a resemblance to the incandescence of the sun, it’s a spark and it’s maneuverability. The seven stars, the seven oceans, the reverberation of the seven colors of the rainbow are mystically a sign of the seven colors of the horses that are most prominent.

Newfangled mornings are the gift of the horses. Waking up to a horses face is most propitious, to that extent the horse is a jewel for Indians. Undoubtedly the expenses are generally high for the maintenance of a horse, but the polo professionals are not there to make money. They are there for the love of the game and horses. What could stop them from feeding them any less than their own children? You must have noticed the offices and workplaces often decorated with painting and wall hangings of a white horse running in a particular direction? Well, yes you’re right! It’s said to be a good omen. White horses since forever have been considered a good luck charm. It’s said to be good for prosperity, spreading optimism, bring good fortune and is serendipitous. 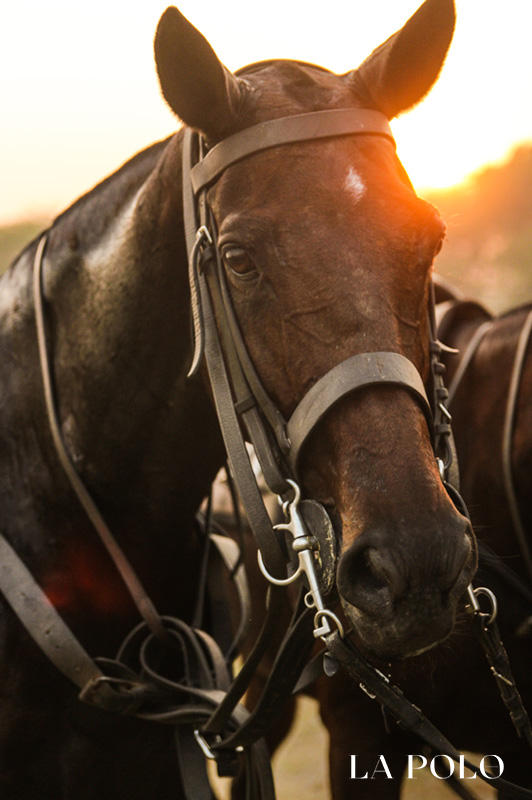 Be it a war or race, horse have had the utmost priority in all areas. The great warriors of India captured and conquered the lands in ancient times only because of the strength and vigor of their horses. Was this possible if polo professionals mistreated their horses in any case? Ashok Samrat, Khan in Nagolia, the brawny Maharana Pratap and the efficacious Maharani Laxmibai all have created an irrevocable history of utmost significance which was an impossible task without the horses. Such is the versatility of horses in the ancient as well as modern day India and world of course. Horses are considered to have a mind better and more quirky than humans. They know exactly what is happening in their surroundings and are aware of their riders and trainers. They know when they have to ride-off, hold, turn around, gallop or jump on the field. In other words, horses are not just animals, but a connection of human beings. There is no way that they can be ill-treated or be paid ignorance to. 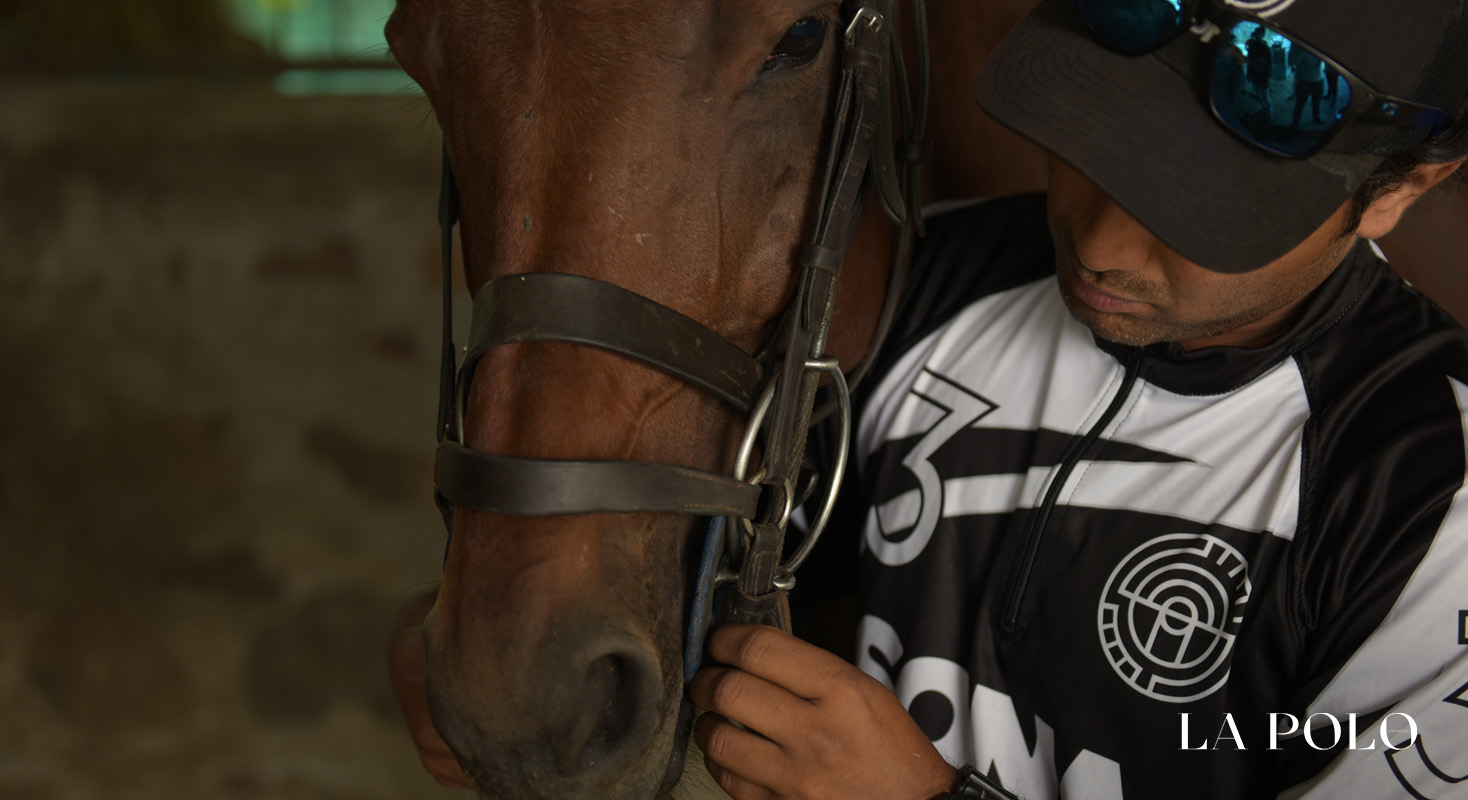 Polo is not just a game, it is a respite for the polo players. The field is their home and horses their mates. They are in it for the love of the sport and the beauty of the horses at play. It needs a heart of stone to ride the horse.


“Often all of the money a player has made in a year, he has spent on a combination of personal expenses, the finest, customized gear for each of his horses, the costly maintenance of his existing horses and for purchasing new horses”

Polo players have a Casanova for horses. A horse would never have to be ridden under any undesirable conditions as they always have several backup horses ready to play on the side of the field. They want to have the nicest fields for them to practice in, the nicest paddocks for them to relax in and the nicest stables for them when they need to be indoors. They pride themselves if they have the best vet in town looking after their horses, the nicest looking blankets and finest leather saddles and equipment. The goal being was to have the healthiest, happiest, well-groomed polo ponies, hence the most talented. The polo pony is “Nobility Without Pride”. It was and will remain the “KING OF THE SPORTS AND THE SPORT OF THE KINGS.” 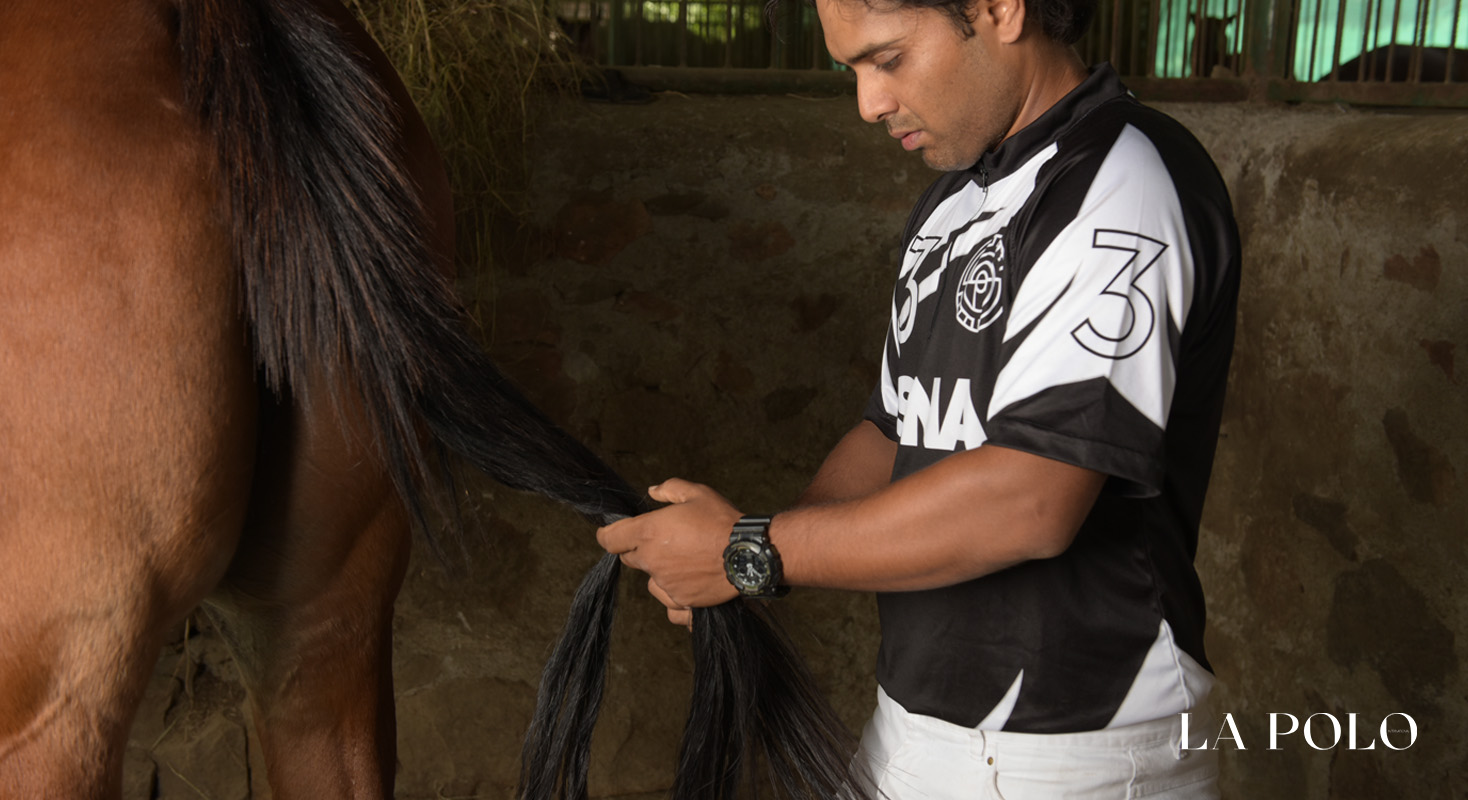