The Noida Polo Season 2021 came with a promise of two magnificent polo tournaments. Down with one, we have the first winners of the first tournament of the season.


Noida Polo Season had its ground, players and ponies all set to get into action from as soon as 28th September 2021. The season was inaugurated by the 8 goal Jindal Polo Cup that witnessed a participation of four teams divided into two pools. In a span of four days, these four teams went against one another to battle it out to finally lift the prestigious trophy.

Crisp and sharp- the inaugural day of the Noida Polo Season was much like this.

Opening up the season, the Jindal Polo Ground witnessed a lightning battle between Jindal Panther and Clairmont for the 8 goal Jindal Polo Cup. 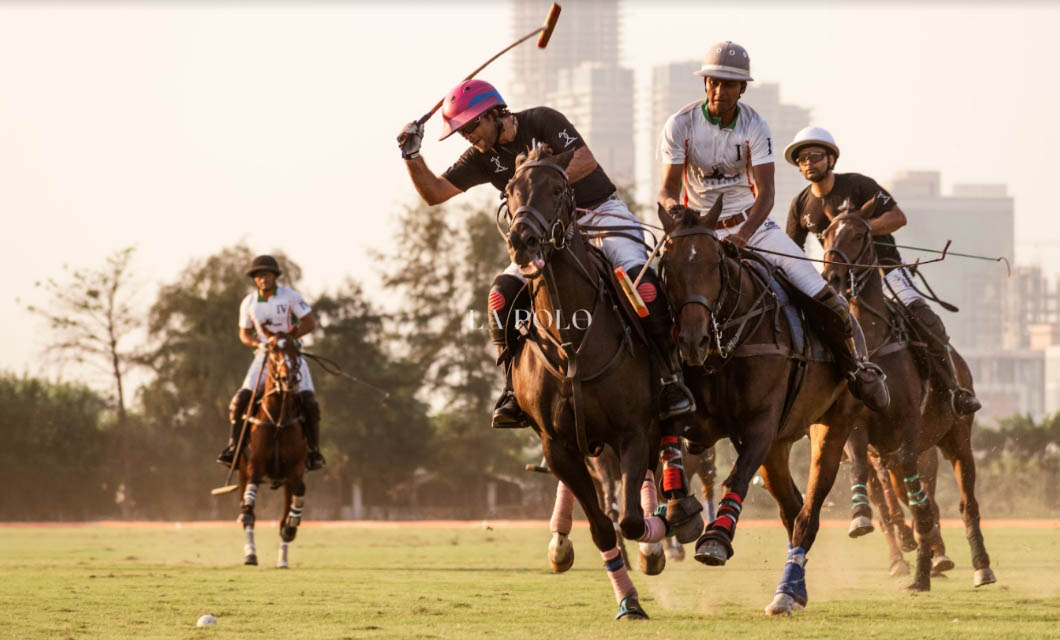 Starting with an advantage of 2.5 goals, Clairmont were clearly in progress against to nil of Jindal Panther, but the latter team didn't let it build the pressure. With a team effort, Simran S Shergill grabbed the first three goals for the team. Nothing was stopping them thereafter, and with continuous effort and ace moves the entire team started to build pressure on Clairmont. Although players like Bhawani Kalvi and Angad Singh Sandhu controlled the hustle well and seized two goals for their team Clairmont, it wasn't enough to beat the 8 goals of Jindal Panther.

The day ended with Jindal Panther in victory with 8 goals to 4.5 Clairmont. 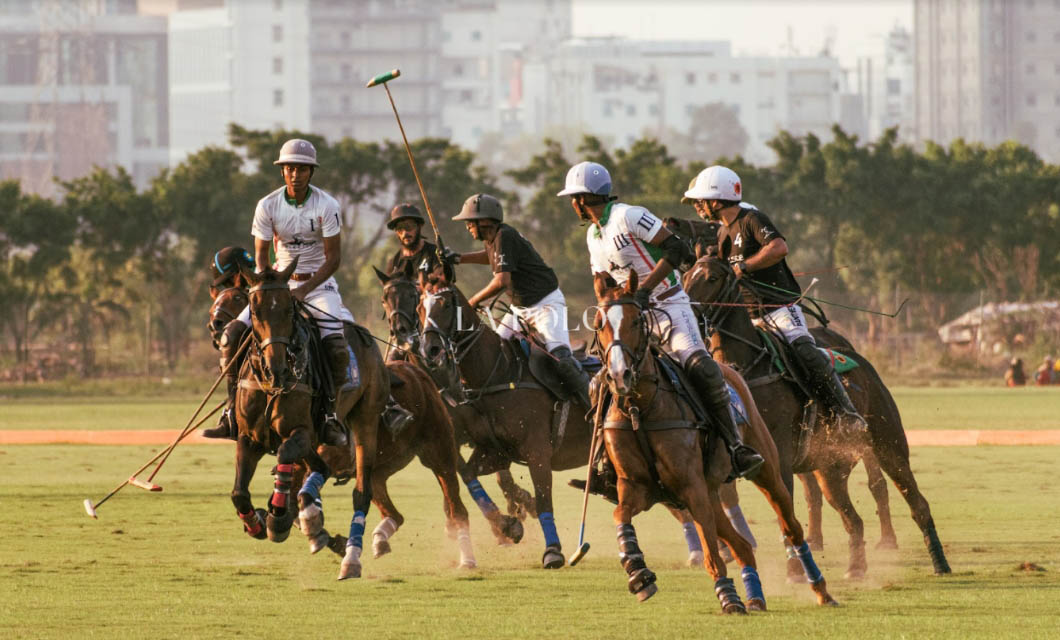 Second day into action and the predictions for the possible qualifiers for the finals have already been doing the rounds.

After the win of Jindal Panther on the first day of Jindal Polo Cup, the second day of the 8 goal tournament witnessed a call for battle between Riverside Polo and Sahara Warriors. Keeping up with the rules of Polo, Riverside Polo was awarded with an advantage of 0.5 goals. 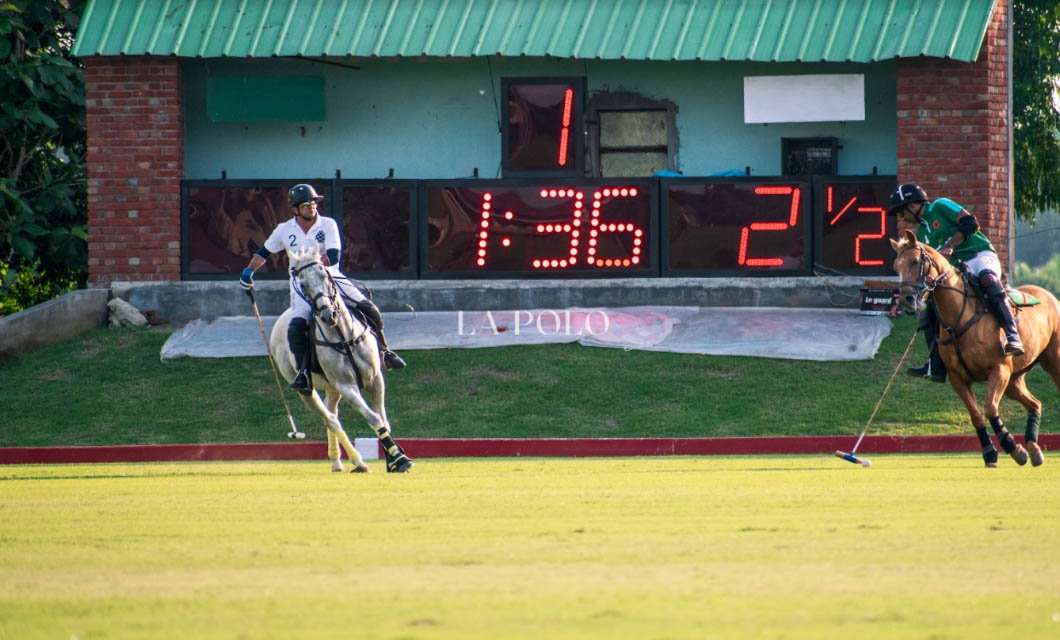 With this, the play started off to put forth ahead of us some tremendous performances by the Sahara Warriors team collectively. The precise pass, defence, control and scoring tactics of the team with Daniel Otamendi, Angad Kalaan, L'Nk Ravinder Mang and Sep Mukesh Gurjar in action, the team galloped fast near to victory for the day. So much so that they did not allow the opponent team to score any goals.

The stance of the play turned such that Riverside Polo and Sahara Warriors, collectively as teams with mutual understanding and decision, called off the match soon after the half time of the fourth chukker was announced. 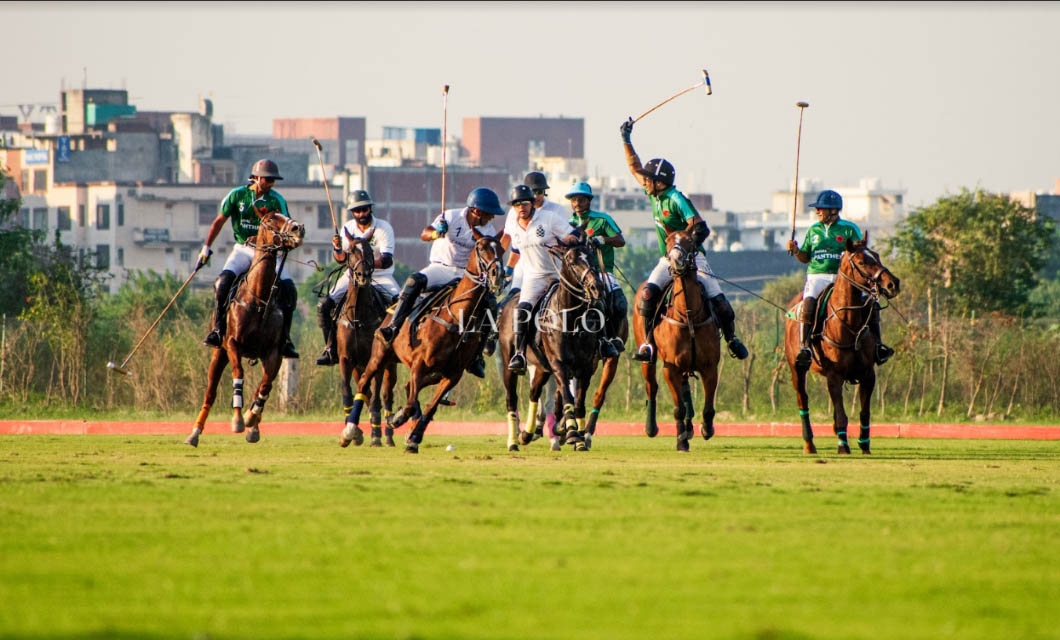 The match, therefore, rested at 7 goals to 0.5 with Sahara Warriors in the lead.

A little bit on predictions but a lot more surprises, the semi finale of the 8 goal Jindal Polo Cup was more like this. 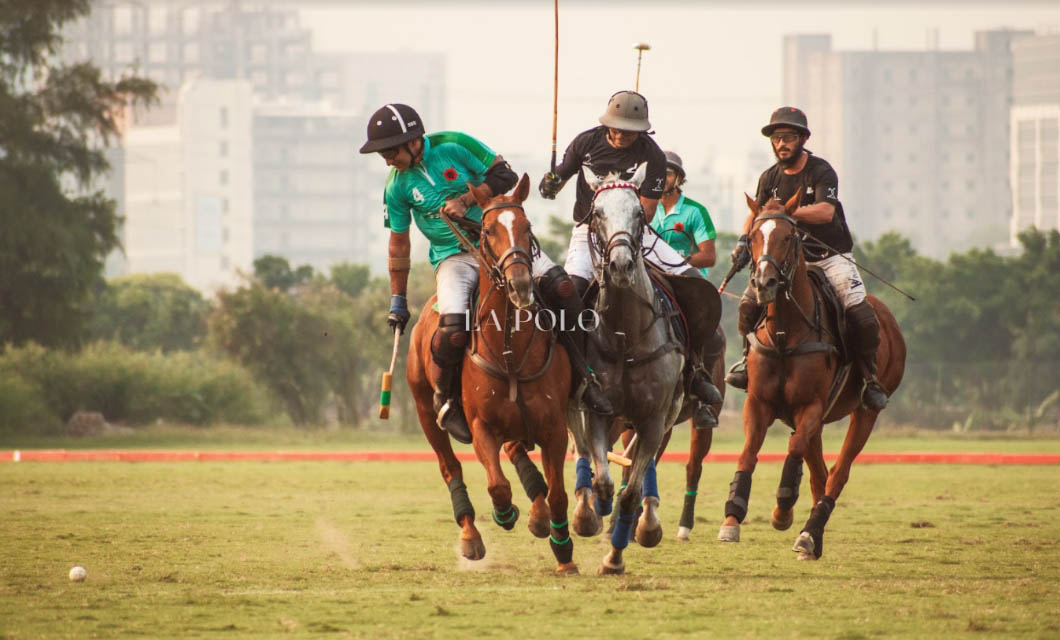 While it was somewhere on the cards that Jindal Panther and Sahara Warriors would qualify for the finals, looking at the performances throughout the league days, the semi finals had a little spice added to the action. 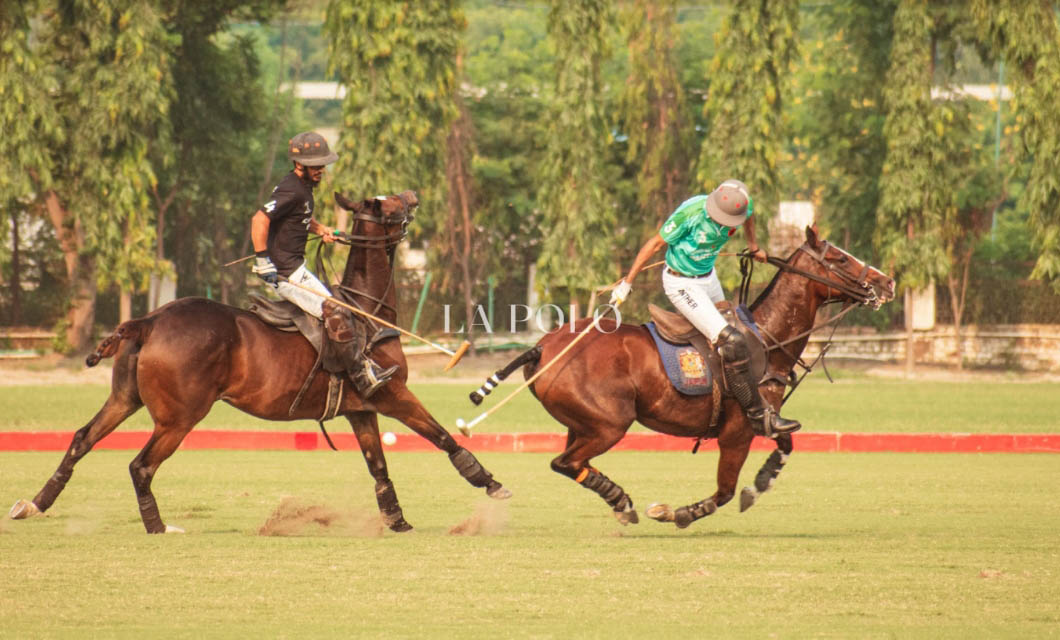 Soon after a few breather minutes, the second semi-finale got into action with Clairmont and Sahara Warriors. With great swap in team, Clairmont looked all new with Siddhant Sharma, Kuldeep Singh Rathore, Bhawani Kalvi and Rohan. To begin with Sahara Warriors set a tone for the play but Clairmont was unstoppable. They came in roaring like a tiger and had the game gripped for themselves as well. But as fate might have it, Sahara Warriors out-shined with 10 goals to 7.

The final was played between Jindal Panther and Sahara Warriors on 3rd October 2021 at Jindal Polo Ground. 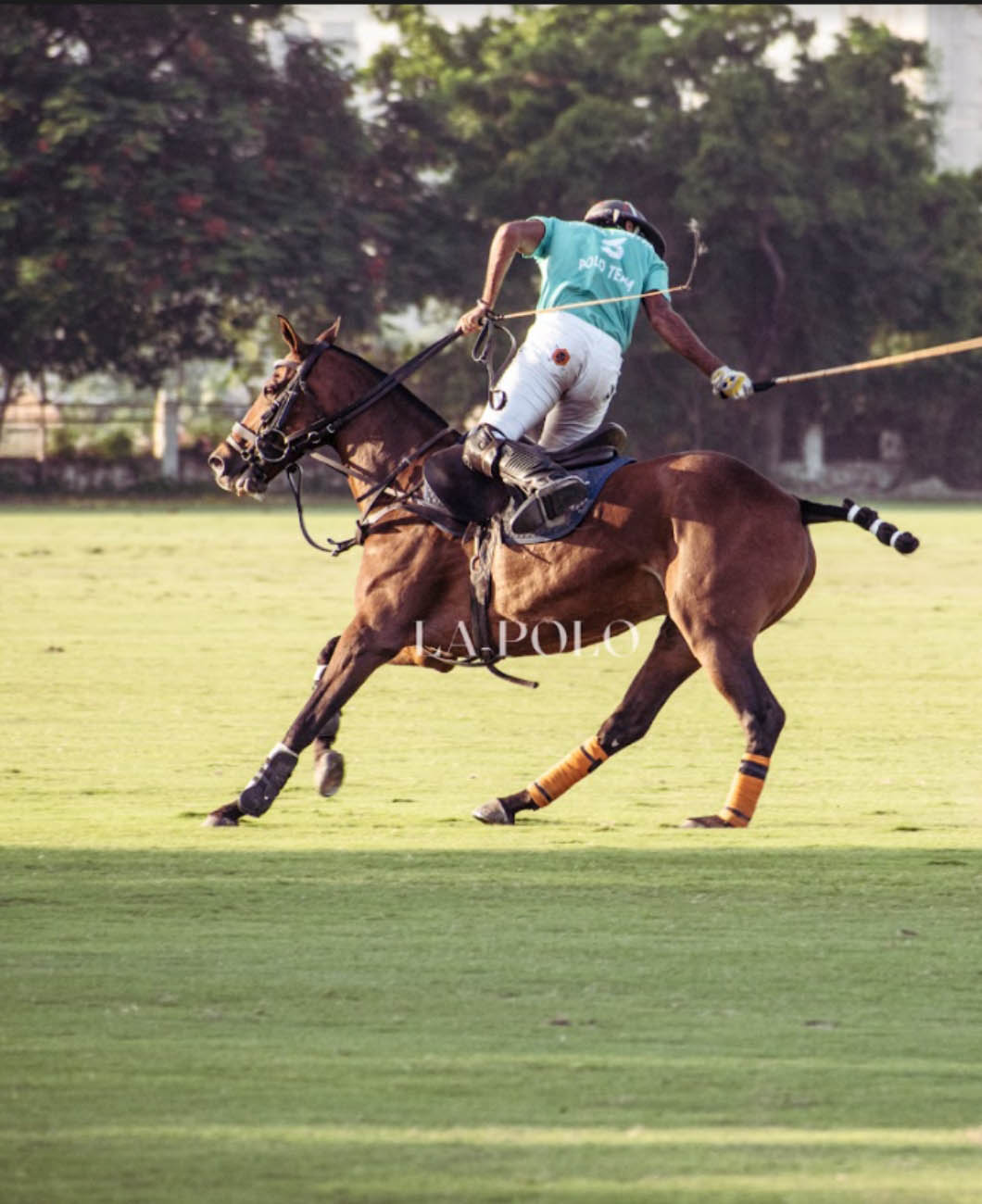 The first tournament of the Noida Polo Season, the 8 goal Jindal Polo Cup came to an end after a magnificent finals.

With two really competitive teams neck to neck, the grandstand was all set to blaze with cheering. Jindal Panther and Sahara Warriors were all set to face each other for the final battle.

It was astonishingly odd to see Sawai Padmanabh Singh and Daniel Otamendi against each other after being teammates for so long. But as odd it was, it also got interesting to see how both the players anticipated and teased the further forward moves.

For the rest of the finale, both the teams kept the score intact with breathing the scoreboard only with equals one after the other- but it was majorly in the last chukker that things got tensed up.

The pressure had started to build for Sahara Warriors as Jindal Panther was leading with 6 goals. For the last couple of minutes the ace player from Jindal Panther, Simran S Shergill kept the ball in control by passing and tossing between his team members.