From being an off-season variant to Premier League events, boundless possibilities emerge for the sport that can hold on its own.


Richard J Mecredy, the Irish editor of a bike magazine, devised bicycle polo in 1891, 20 years after the first polo match was played in British India. This was a refreshing substitute for polo lovers to indulge in their favourite sport in the off-season.

An official rulebook of the sport, borrowing judiciously from horseback polo, was laid out in Mecredy’s magazine, on October 31, 1891. Cycle polo initially served as a variant of horseback polo and ensured that the patrons of the sport could bide their time by riding on these steeds of steel while the ponies recuperated in the stables.

The sport achieved its peak in popularity when it found itself amongst the elite fold, at the 1908 Olympics. However, from this enviable position, it underwent a slump. The commencement of the First World War could be one of the reasons.

Post-war, restarting the sport from scratch was needed, before it could reinstate itself again as an international sport. Regional leagues in England and France led the revival, until another halt in the Second World War.

To their credit, the regional leagues were inspired and a bunch of youngsters quickly took up the sport. A parallel movement offshore led to the formation of national governing bodies for the sport, in countries such as India and the USA. Bike polo championships helped teams from India, Canada and the USA cement their stronghold over the sport in the international sphere. Later, teams from England and France too joined the sport in a big way. 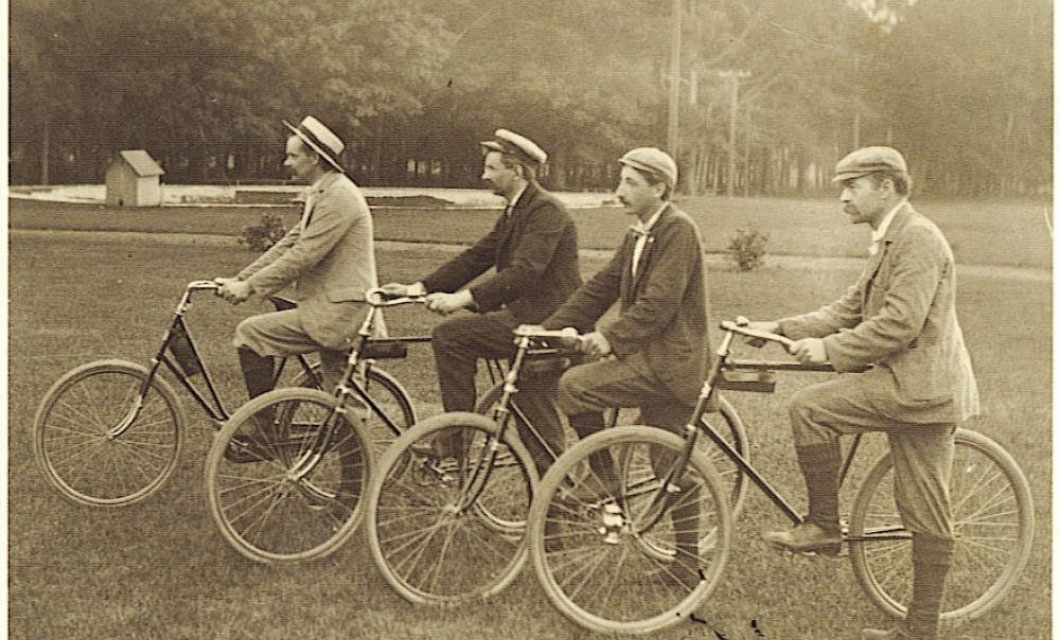 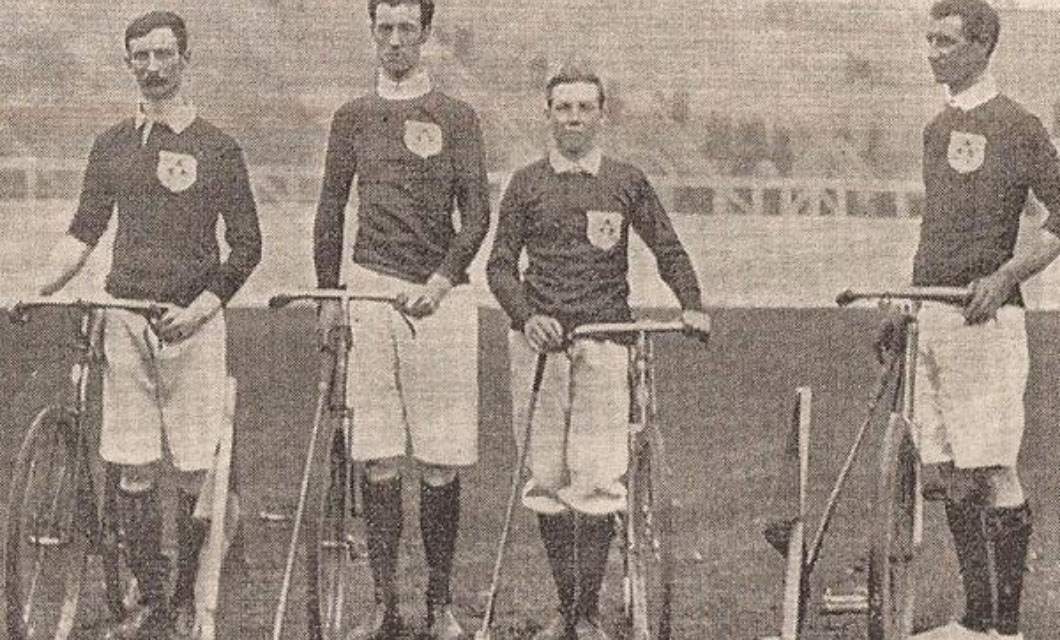 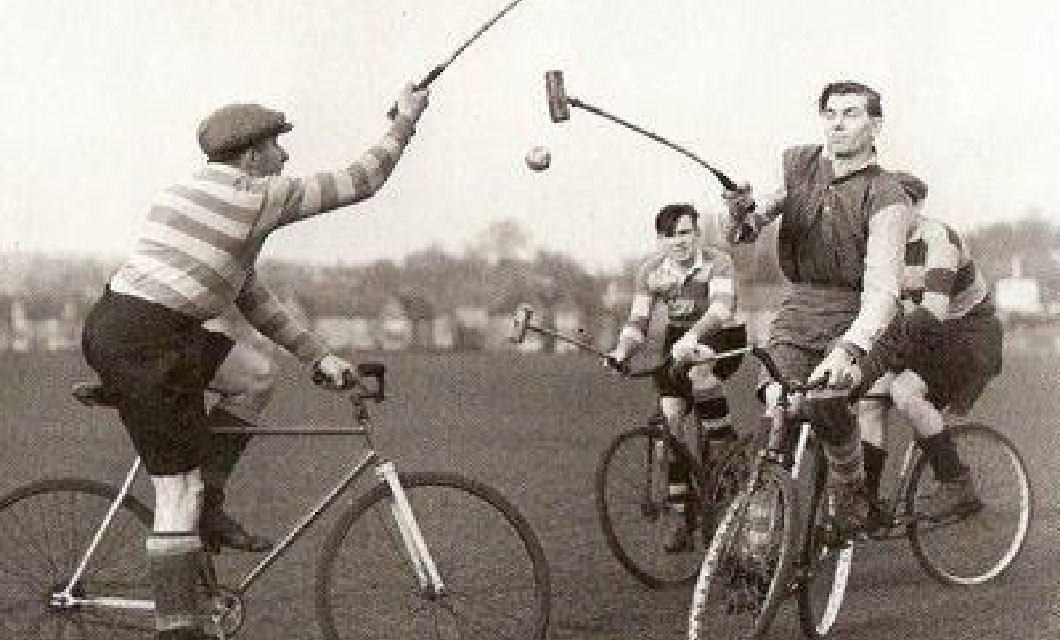 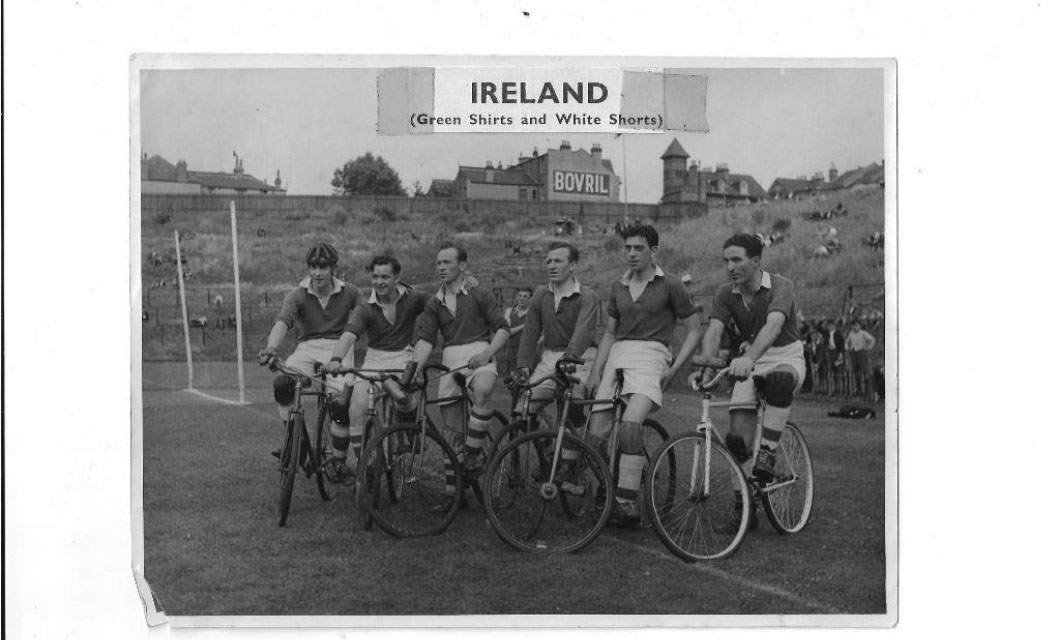 The advent of cycle polo meant the maharajas could engage in their dearest game, while their ponies enjoyed a restful stint in the off-season. From the erstwhile kingdoms of Jaipur, Jodhpur, Alwar, Baria and Patiala, among others, to the British army regiments, the game gained a sizeable foothold. Post the abrupt stoppage due to the two world wars, the game was restarted from scratch.

The Cycle Polo Federation of India (CPFI) was formed in 1966. It started country-wide operations of the nascent sport. The turn of the century saw India emerge as a powerhouse as it claimed the gold in the first four world championships.

The popularity and the longevity of a sport depend to a large extent to the way the sport is accepted amongst the youth. The CPFI has to be credited for effectively tapping into this huge segment. “We are affiliated with the School Games Federation of India, and hence, the sport will be included in the National School Games,” says Raghuvendra Singh Dundlod, president, CPFI.

“The sport has been picked up by the defence services with players being given jobs in the same,” he adds.

Maharashtra, Rajasthan, Punjab and Bengal are the major players. The Federation has plans to commercialise cycle polo, just the way it has been for kabaddi, football and badminton. The Premier League format is helpful in this. 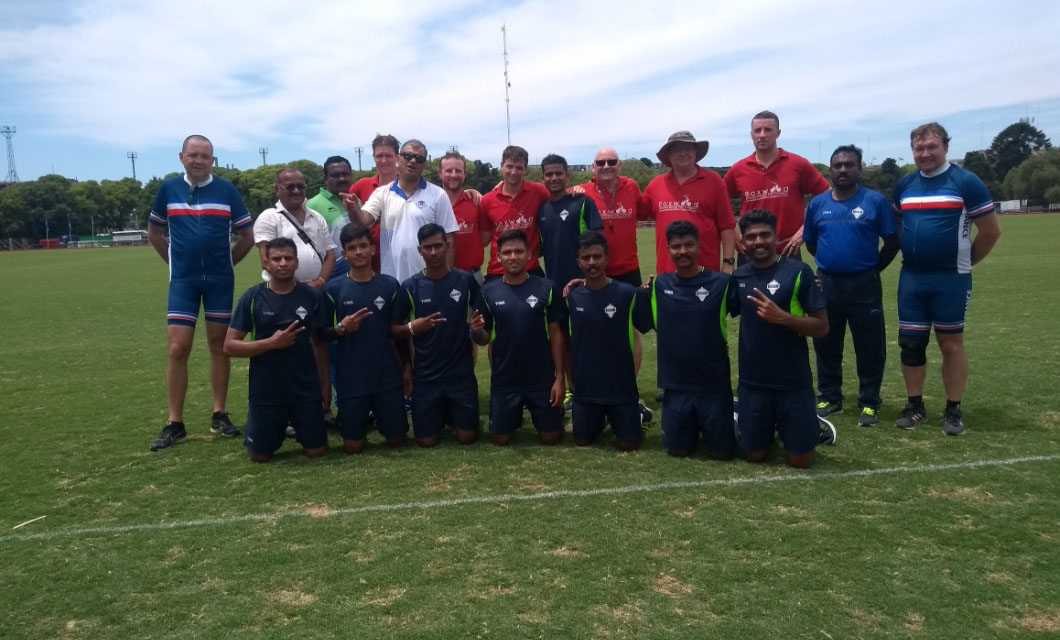 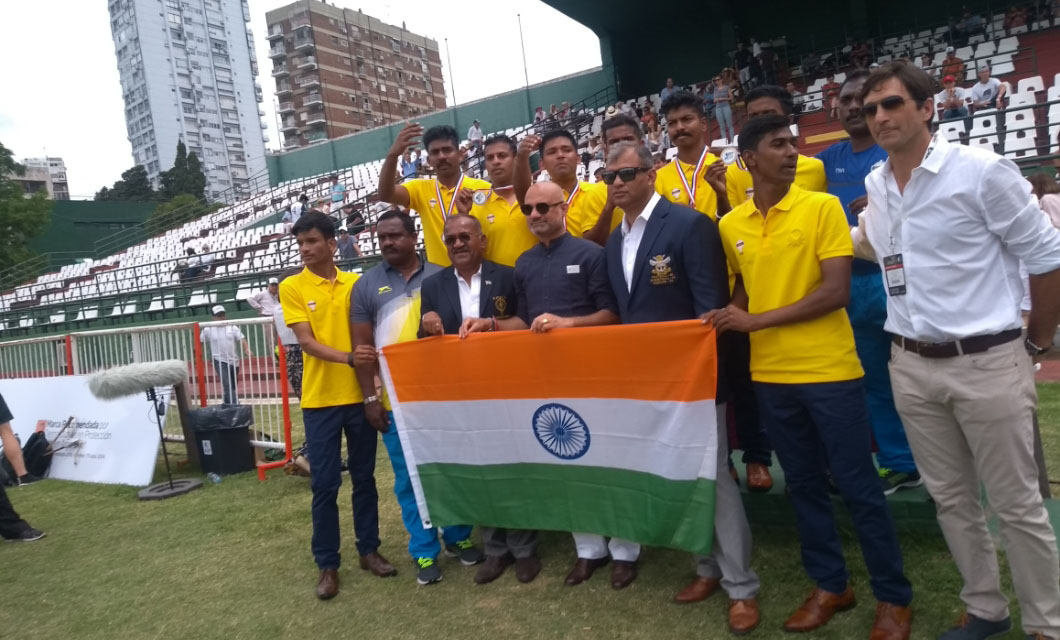 Taking the cue from the United States Polo Association, the CPFI too has plans to sign a contract for bringing out commercial goods which would help in popularizing the game.

The sport saw a fashionable variant by bike messengers in Seattle, USA. The inventors, having some time to kill in between their deliveries, came up with the idea of playing cycle polo on a hard court. Tennis and basketball courts were subjected to encroachment by these enterprising “bike messengers” as they formulated the rules for the modern variant, perhaps the wayward or punk cousin of the traditional format.

The rules were modified for playing cycle polo in a more constricted setting than the 150 by 100 meters grass field in which it was usually played and hence, the number of players in the team was reduced to three instead of four. The duration of the matches are usually 30-40 minutes, although there are no chukkas. While India has proved its mettle in the traditional form of cycle polo, the hard-court format is yet to gain a foothold. Dundlod cites the dearth of open green fields as the reason behind the hard-court format gaining ground in some countries. 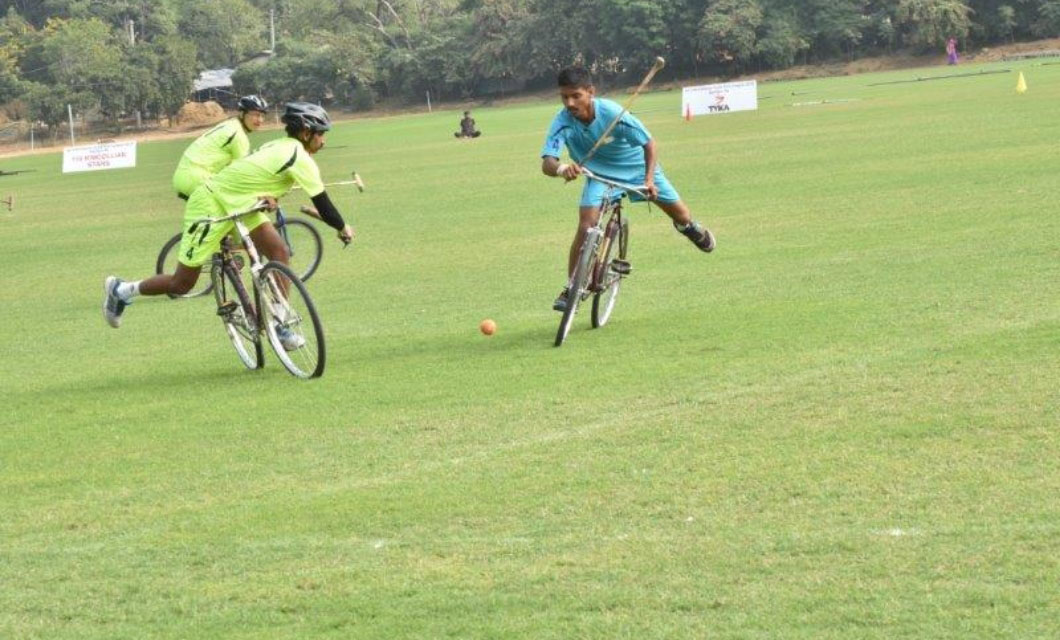 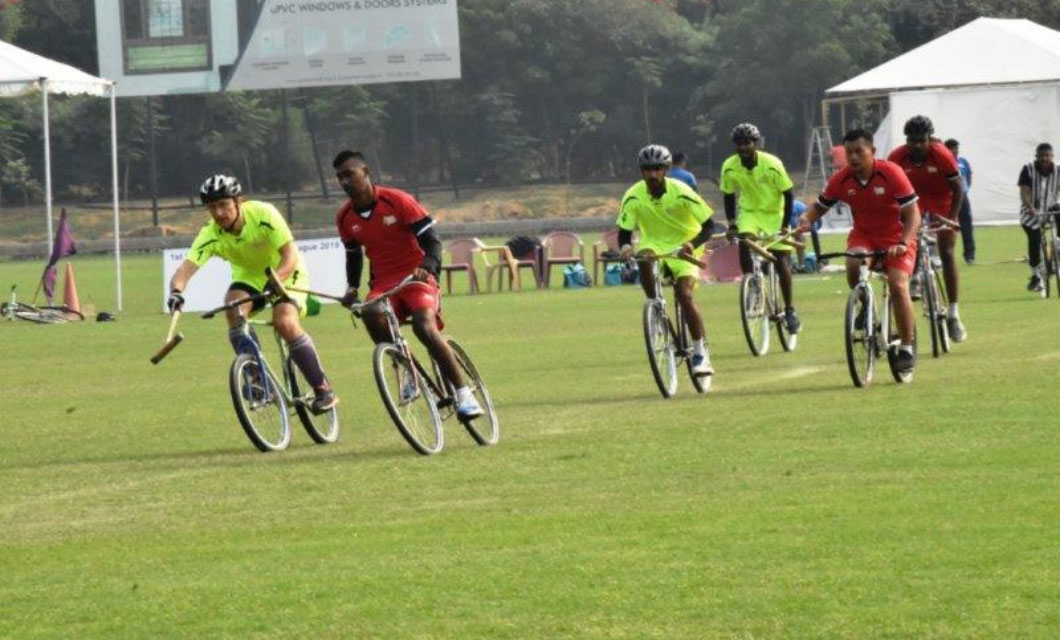 “Besides, the CPFI has made sure that the rules of cycle polo as stated by the International Bicycle Polo Federation are not changed. Hence, in India we are keen to stick to the original format,” says Dundlod.

In the past, the possibility of organising cycle polo matches along with the horseback polo matches has been discussed, for polo lovers to enjoy their game through the year. Jaipur, Jodhpur and Noida have been treated to such events and the CPFI looks forward to the coordination of more polo clubs for organising events that are inclusive of cycle polo matches. The Federation has been organising separate championships for the sport, with the nationals being an annual fixture, wherein players compete in all three categories, Senior, Junior and Sub-Junior , both for boys and girls along with other tournaments such as the Federation Cup, held at the Calcutta Cricket and Football Club and Air force Base Chandigarh. 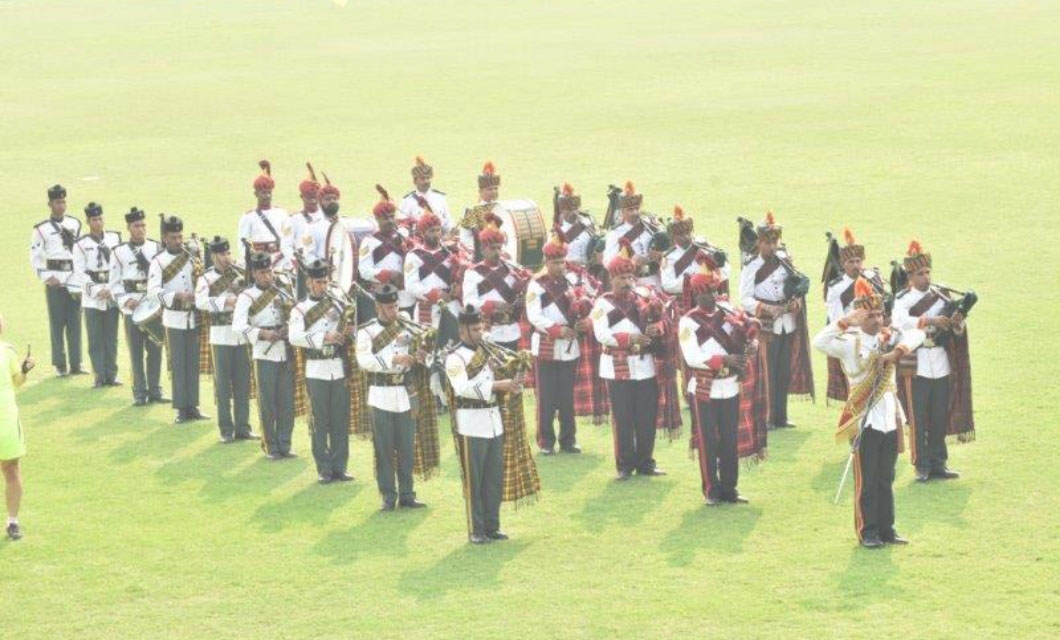 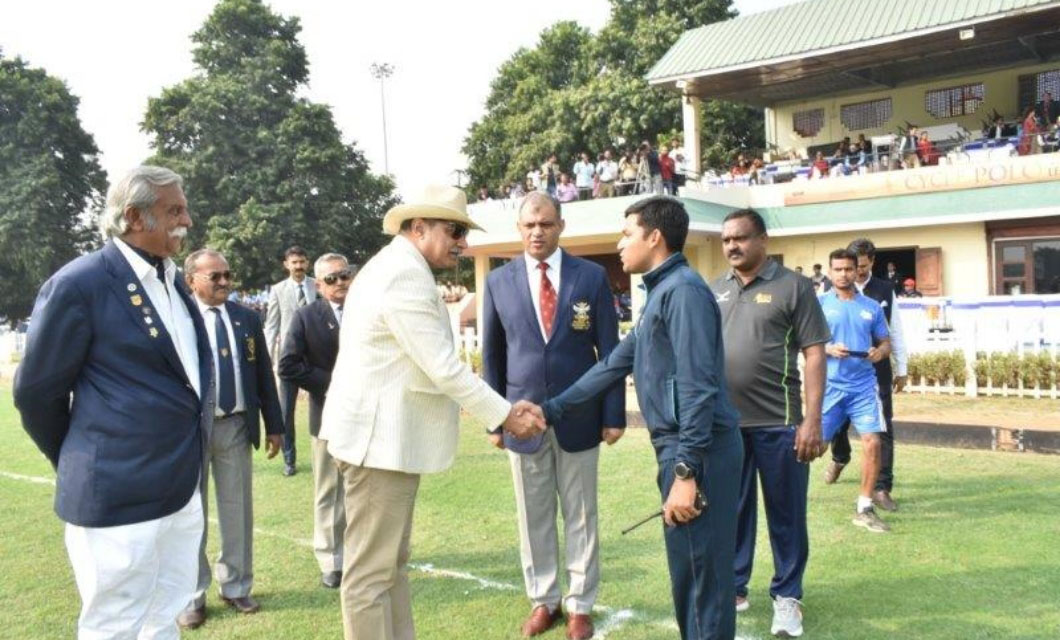 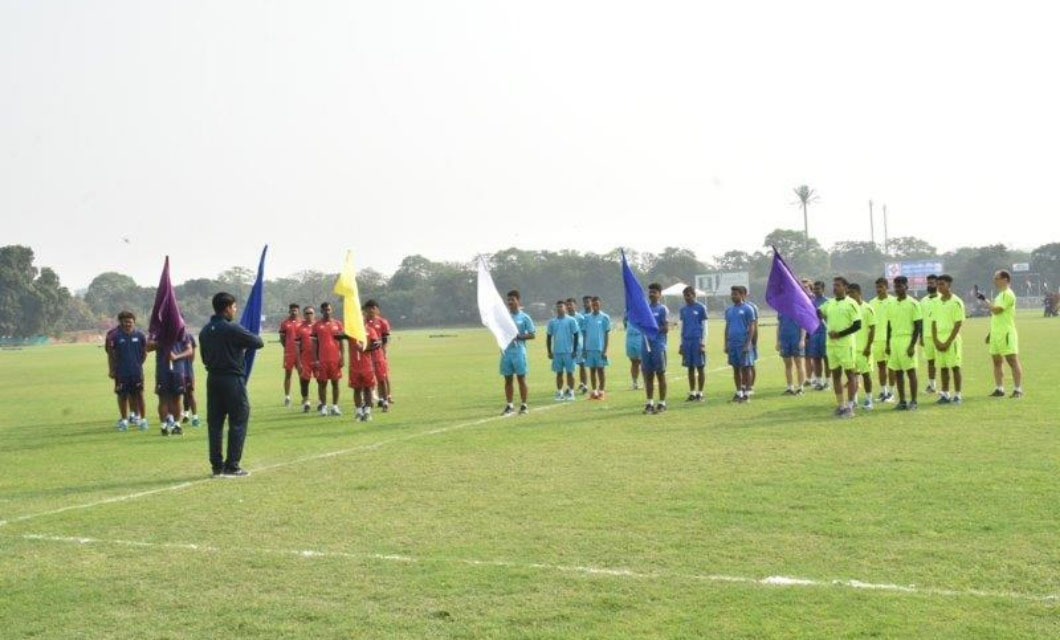 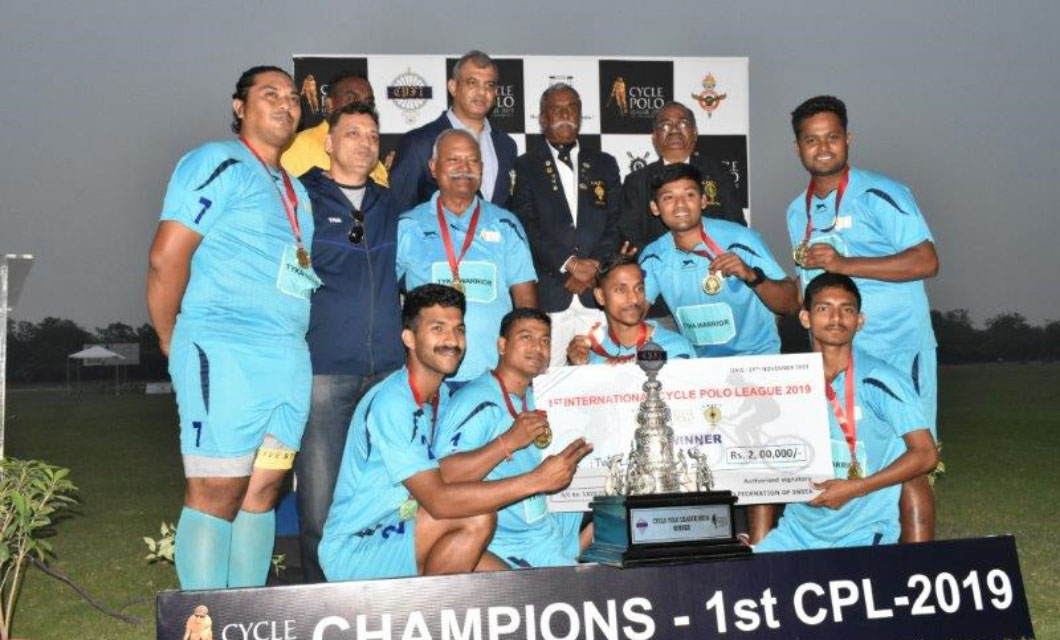 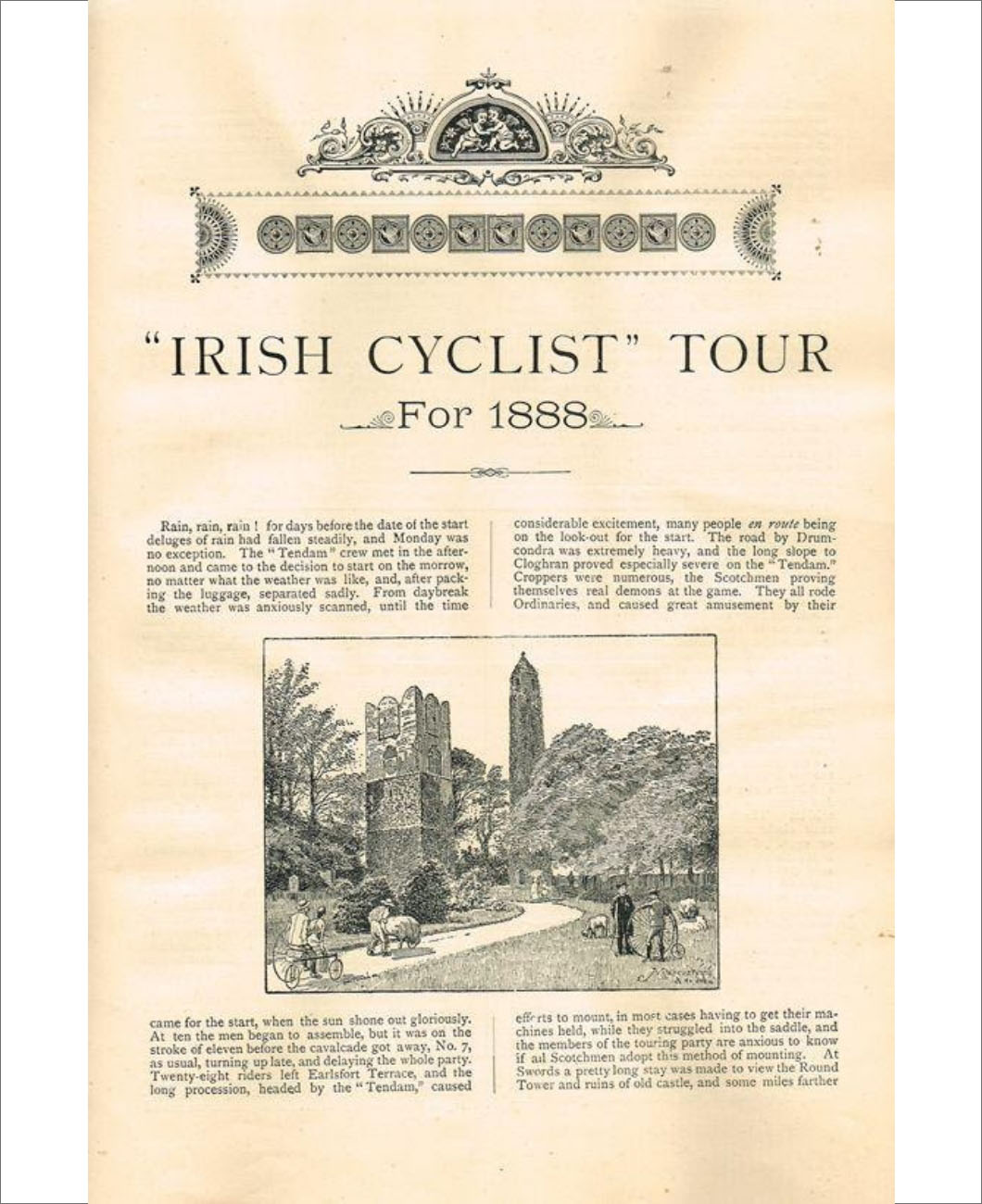 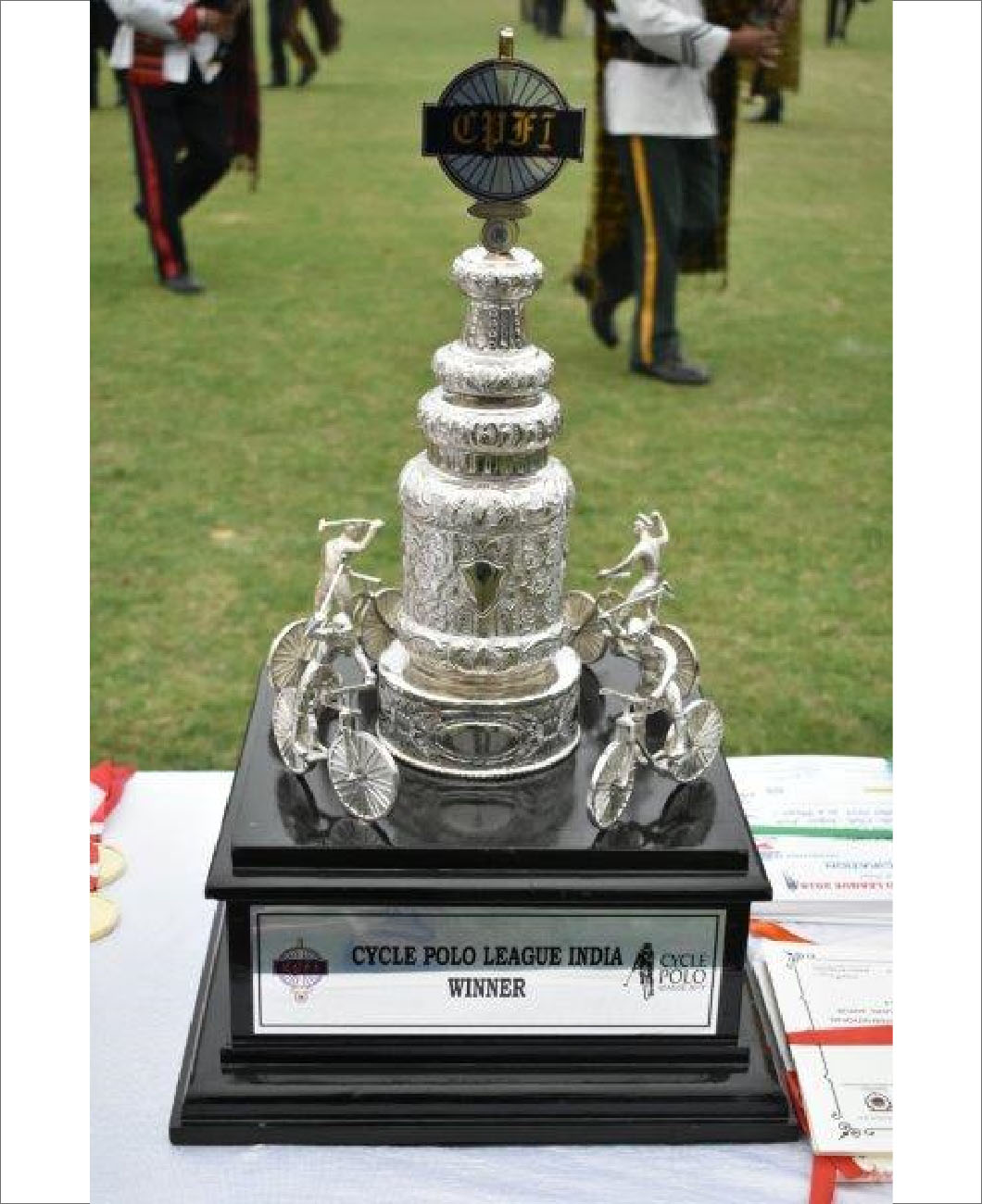 It was inaugurated by Lt General Alok Kler VSM Army Commander South West Command. On the occasion, a spectacular display by the Army Band and Air Warrior Drill Team of Indian Air Force was done.

India won all the matches and Gold Medal while the USA and UK were ranked 2nd and 3rd. 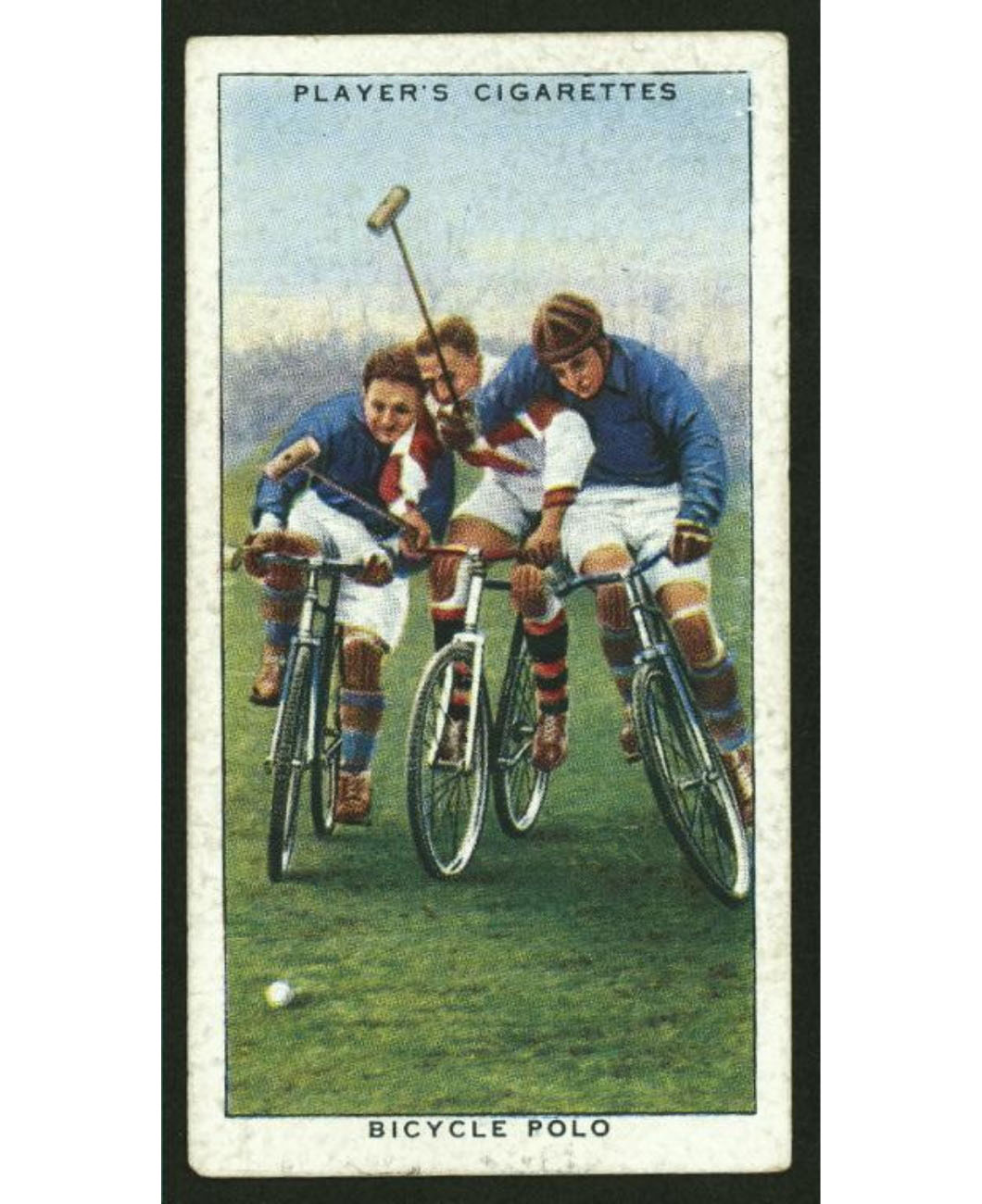 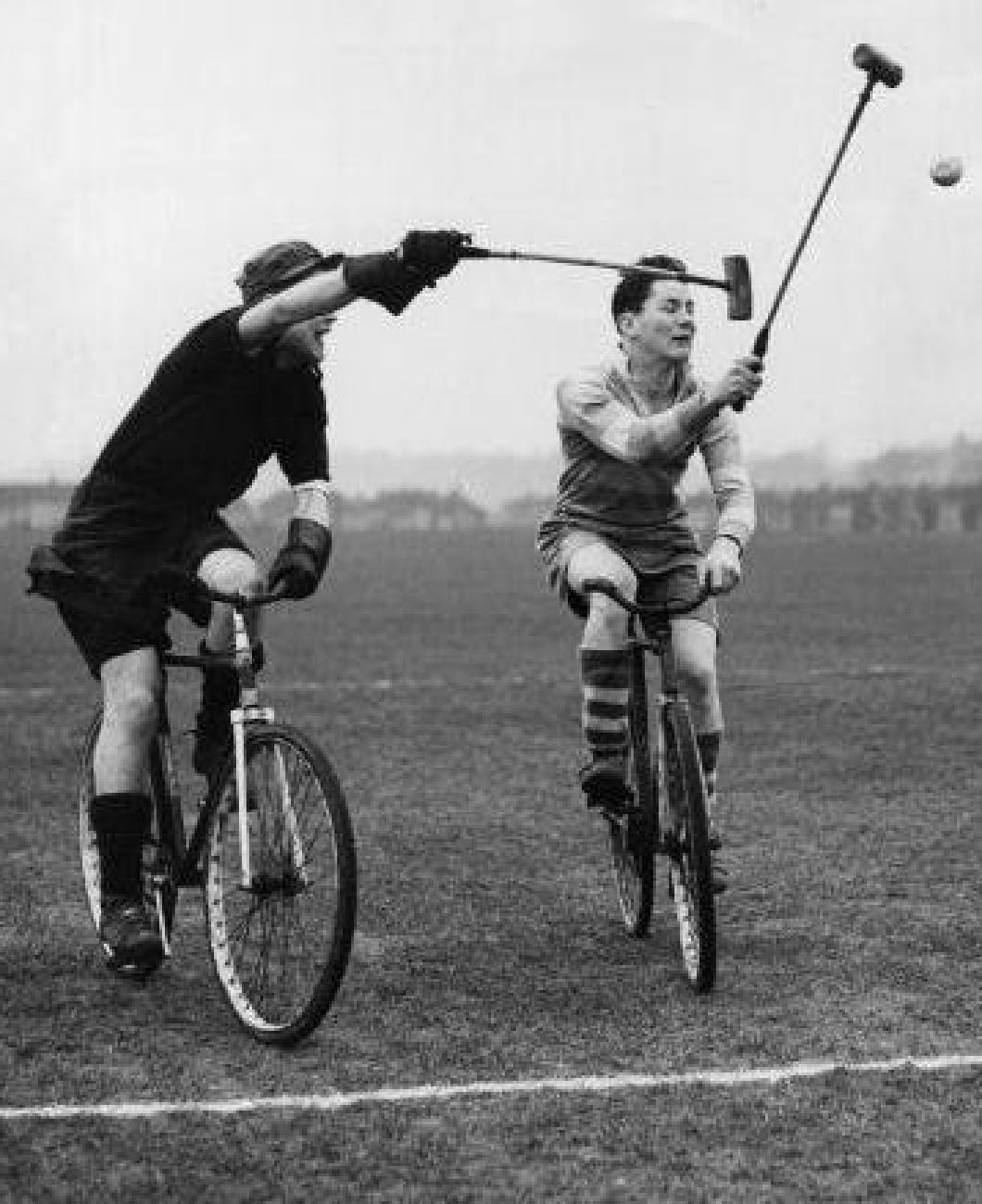 Indian Ambassador, His Excellency Dinesh Bhatia, witnessed the Final Match between India and USA which India won by 12-3.

So far, 12 World Cup Cycle Polo Championships have been conducted and India has participated in eight held in the USA, UK, France, Canada, India and Argentina. India won six Gold Medals and 2 Bronze.

India holds a very strong place at World Cycle Polo and has defeated countries like the USA, UK, France, Canada, Germany and now Argentina. Dundlod said: “It has given our players confidence and now all member states of the country are improving the standard of their players. India plans to host the next World Cycle Polo Championship in 2021/2022.”

Although now due to the pandemic, things are shaping differently. Covid-19 has left its impact on the sport and the National Championships of Boys in Senior, Junior and Sub Junior categories had to be cancelled. Players are unable to practice as it's a team sport but so far they are continuing with their physical training and exercise individually. CPFI is soon going to have an online coaching session for safe play and now plans to start the calendar of events from October onwards.

Indicating the future of the sport, Dundlod said: “Our aim is to have a minimum of 45 countries to play cycle polo so that we could request for an exhibition sport at the Olympics. With an emphasis on the environment and physical fitness, countries will pick up the sport. Achievements at World Championships have ensured job opportunities for our players.”

Media exposure will help to utilise the grand success of Indian Polo at the World Championships of Cycle Polo, Dundlod said. “Unfortunately, Indian media focuses on cricket. After cricket, comes Asian and Olympic Games or sports which has an endorsement from film stars. We need to have more media exposure to inspire the younger generation because Cycle Polo is not only fast, thrilling and adventures, but is also Eco friendly. Job opportunities and government cash awards will inspire youngsters to take up the sport. At present, we are fortunate that the Indian Air Force, Indian Army and Territorial Army support the sport and best players are recruited by them.”, he added.

Today, the sport is breaking new ground. Induction into the Commonwealth Games or the Asian Games would be the next pit-stop. Closer home, the sport’s adventurous and vigorously competitive nature seems to be catching up among the youth.

Talking about the sport, Assarudeen Sha, who captained the Indian Bicycle Polo team at the 11th World Cup, 2016 and 12th World Cup 2019 said: “My passion, hard work and dedication for cycle polo gave me the opportunity to get selected in the Indian Air Force, to represent IAF at the National Championships.”

Talking about the position of India in Bicycle Polo, Sha remarked that the country holds an important position. “Our president, Raghuvendra Singh Dundlod, is instrumental in establishing International Bicycle Polo Federation and in setting up the uniform rules of the game. He is presently the Vice-President (Technical) of the International Bicycle Polo Federation. In India, many states, Indian Air Force, Territorial Army and Army have taken up the sport and we have proved our worth at the international level as well.”

He claimed that the Ministry of Sports Government should be more proactive towards the sport.

Sharing his thoughts on the 2021 championship, Sha said: “Teamwork and regular practice is essential.” Reflecting back to the time when he was the captain, he added: “I had an added responsibility, as for most of my team members it was the first World Cup and first time abroad. Keeping their morale high was important.” As of looking in the future, everyone is hoping for the best.” COVID has affected the calendar of our National and World Championships. But players are in practice and I am confident that we will see positive results by 2021.”

TIMELINE – The Evolution of Bicycle Polo

1891
Bicycle Polo, a game of strenuous amusement is born
1898
Bicycle polo is played for the first time in France as a demonstration took place in Moulin Rouge with Captain Wood’s team
1901
1st International Bicycle Polo match, Ireland beat England 10 – 5
1908
Bicycle Polo is resurrected for the London Olympic Games
1925
Polo-velo-Club Francais and Polo-Club de Paris are formed
1928
The first Bicycle Polo Championship in France features teams from within and around Paris
1930
Bicycle Polo Association of Great Britain is formed
1934
France plays with the United Kingdom in the first international match. France, playing with French rules, wins 9-2
1939
France and United Kingdom have a re-match in Paris, using French rules; the game ends in a 6-6 draw. Later in the year, they play each other in England, using British rules, with the United Kingdom coming out 6-1 winner
1939-1945
World War II stops Bicycle Polo matches
1946
Bike polo re-starts after the war, at Aquitaine, Paris, Normandy and The Pyrenees
1949
The first Bike Polo Championships since World War II takes place, with US, Pessac being crowned champions
1959
Twelve teams compete regional Aquitaine Championships
1960
Bike polo continues to grow as the first teams from the Orleans area are formed
1967
Bicycle Polo gets the royal seal of approval
1999
Hardcourt Bike Polo is born
2006
Hardcourt Bike Polo comes to London
2009
1st European Hardcourt Bike Polo Championships, London