The final of the IPG Col Girdhari Singh Memorial Cup was a no winner till the last minute of the game.


How exciting would be a Polo final if the winner is decided in the last minute of the match! IPG Col Girdhari Singh Memorial Cup finals between Rajnigandha Achievers and Col Girdhari Singh ASC witnessed something similar. The match was to start at 3 pm at the Jaipur Polo Ground, Delhi. The grandstand was packed with people who were excited to their nerves for the match to begin. Preparing for the last match of the Delhi Polo Season, the players were excited and nervous about the match. Greeting each other with a warm welcome, the players and the team owners had a motivational talk before the match. The commentator for the match, Sharad was ready with some good punchlines to start off the match. Blank expressions of the crowd soon turned into happy faces when the band performed their performances. The agitated crowd was on their toes after the horse show was displayed before the start of the match. The players massed around the umpire, the commentator called every player individually, players got themselves clicked, the photographers clicked team photographs, the crowd was anxious and enthusiastic at the same time and the chief guest/organizer, Col Solanki threw the ball for the finals to begin. The umpires for the match were Julio Bensadon and Lt. Col A Samantaray. Rajnigandha Achievers were ready in white while Col Girdhari Singh ASC played in blue.
The team composition was as follows:


The match started off on a score of 1.5 - 0 with Col Girdhari Singh ASC in the lead. Lt Col Vishal Chauhan played in place of Samir Suhag, as he was injured. The total handicap of Col girdhari Singh ASC was +6 and they were awarded a good lead before the match. The match started off with a quick goal from Naveen Singh. 5 minutes 30 seconds were left for the first chukker when Naveen Singh made his run from the half towards the goal. His shot was defended in the process but he was able to complete his run and score a brilliant goal for his team. The score was 2.5 - 0 after his goal. Blazing off towards the goal with a counter attack were Matthew Perry and Salim Azmi who couldn’t convert the play into a goal. Rajnigandha Achievers were goalless in the first chukker. The match was tilted towards Col Girdhari Singh ASC polo team and a powerful shot from Lt. Col Vishal Chauhan extended Col Girdhari Singh ASC Polo team’s lead. The match was now at 3.5 - 0. Hurr Ali passed a good ball to Salim Azmi who hit the ball hard towards Matthew Perry. A beautiful play was made for Matthew perry at the right wing when Matthew Perry hit a powerful shot from the angle. He missed the goal by few inches but it was a good effort from the team. The first chukker was settled at 3.5 - 0 with Col Girdhari Singh ASC Polo team in the lead.

The second chukker witnessed Rajnigandha Achievers displaying a great game against their rivals. Matthew Perry struck the first goal for his team and the first goal of the chukker. He hit the ball in from a 40-yard penalty. The second goal by Matthew Perry earned him a lot of cheers and applause from the stands. Snatching the ball from defense, he ran with the ball towards the goal. Drifting past Col Girdhari Singh ASC Polo team’s defense, Matthew Perry scored a fabulous goal for his team. The score was 3.5 - 2 after his goal. Rajnigandha Achievers were back in the game after two brilliant strikes from their key man, Matthew Perry. Col Girdhari Singh tried several times to score but were denied goals by Rajnigandha Achievers’ defense. A quick play cem into action by Rajnigandha Achievers which was converted into a goal by the man in the white helmet, Deepak Udar. The score was 3.5 - 3 after Deepak Udar’s goal. The speed, blaze, and intensity of the game had everyone on the brink of the chairs, holding it tight and jumping grandly with each goal bagged, but the fate of the game remained as unpredictable as it could get. Col Girdhari Singh ASC Polo team headed towards the goal with Lt. Col Vishal Chauhan taking the charge. A brilliant goal-line save from Salim Azmi denied Lt. Col Vishal Chauhan the goal but Lt. Col Vishal Chauhan scored a brilliant goal on rebound. The score was 3 - 4.5 after Chukker 2. 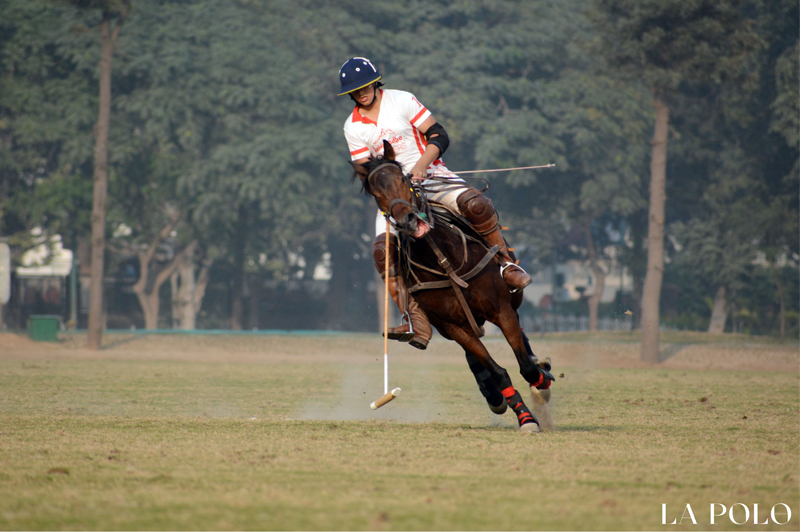 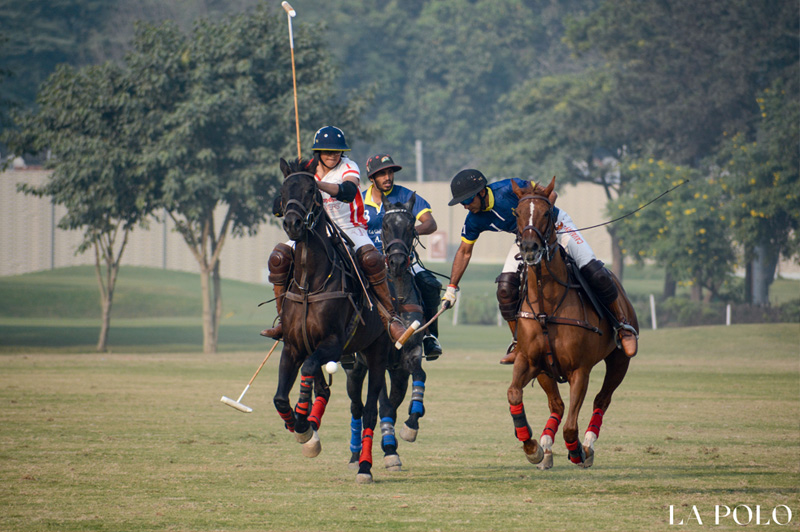 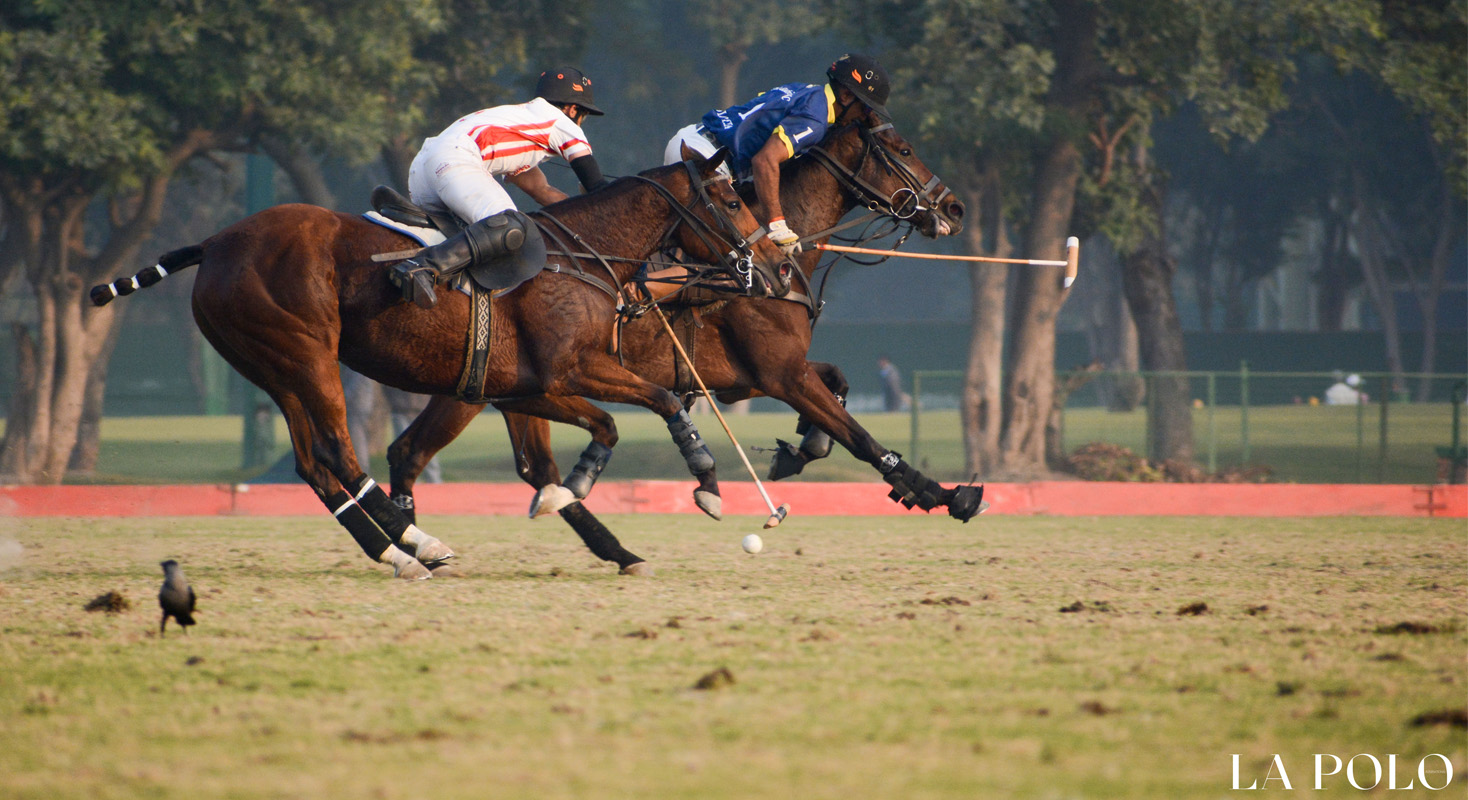 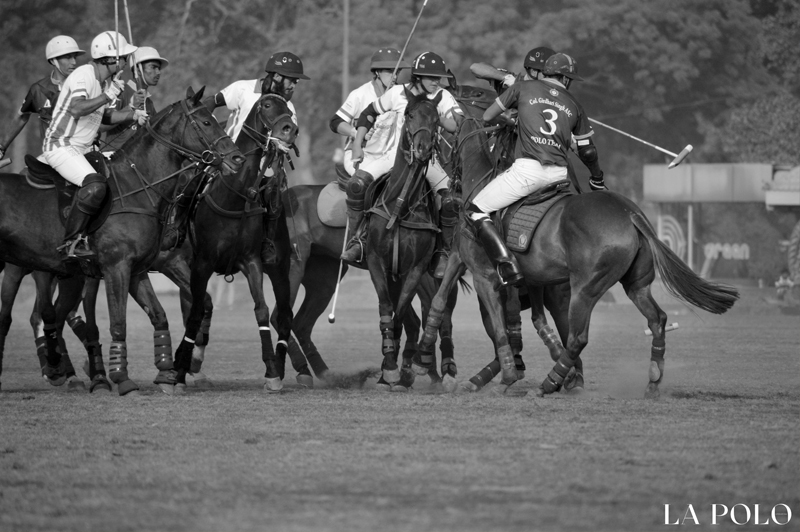 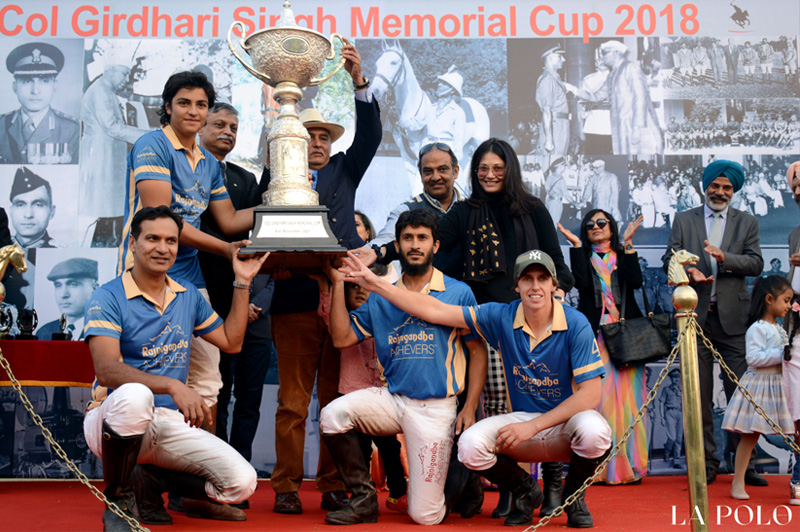