The grandstand was ruled by the exclamation of oohh's and aahh's when the finals of Yes Bank Indian Masters 2018 witnessed it finals at the Jaipur Polo Ground, New Delhi. The grandstand was packed, the horses tacked and players all geared up. Sona Polo and Rajnigandha Achievers were all set to get into the battle for the finals. The aspiration of witnessing Sona Polo as the ultimate winners of the tournament was building up among the audience as the team did not lose any of the match in the entire tournament.The team had stood up erect giving a great example of team effort with each player complimenting the move of the other on the ground. It starts with the warming up section beyond the field, that transfers the positivity as well as boosts the synergy of the entire team. Every team member adds on to the attempt of the other by covering the opponent and stretching their horses in time to get hold of the ball. One key point that has been seen missing in other teams, where either the entire team is solely depended on one star player for the performance, or the team lacks in performance due to an inner conflict. Also, at times there are teams who do not play as one system, in fact focus more on individual performance. This leads to a set back, for, the players and team composition could be great but the individual play and conflict leads to the downfall of the entire team. Sona Polo on the other hand, has a support not only within the team but also has a cheering from the other associated players who are beyond the field that undoubtedly makes a step closer to of victory. Probably, this has been a key for the team’s splendid performance and big victories. The game came into action at 3:00pm with:


The game started off with the throw of the ball and soon Matthew Perry had the ball under his control where he took the ball tapping towards the goal post all by himself with his team and the opponent players following him. Matthew stroke the ball in a dashing hit but the ball turned back after hitting the goal post. A rare view for the audience where Matthew Perry missed a easy shot. The game got into action where Mazzini took hold of the ball and dodged it between the opponent team. Stretching his horse, Mazzini took the ball towards the goal post but was defended by Matthew Perry, he managed to strike the ball even then, but unfortunately missed it. With both the teams trying to score, the game got into action and just like the last attempt, Mazzini attempted a recap but missed the goal one more time. It was two consecutive times that Sona Polo attempted to achieve a score but they missed the chance. After the first chukker was half way through, the umpires signalled the players for the change of ponies, which is a new rule in Indian polo. The chukker started again but did not see any progression in the game. It wrapped at the LA POLO scoreboard still set at 0-0 for both the teams.

The second chukker started maintaining the similar taut condition of the match. The game got into action with Gaurav getting hold of the ball who after tapping it passed it to Matthew Perry, who managed to get the ball in his control. But as Matthew stretched towards the goal post he was soon attacked by Mazzini's bounce. Mazzini hooked Matthew's mallet after which he stroke a lofted backhander passing the ball to his teammates. Padmanabh took the ball but was counter attacked by Salim. In the entire hustle of the game to protect any score, Sona Polo was benefited with a 40 yard penalty shot. Mazzini taking the strike hit a flying shot that went past the goal post bringing the LA POLO scoreboard to life with 1-0. The chukker wrapped at this score and the ground got ready for the third chukker. 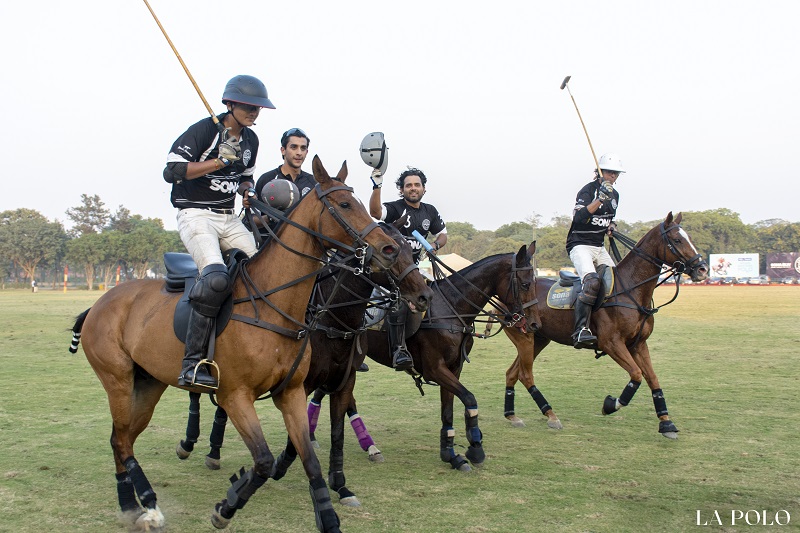 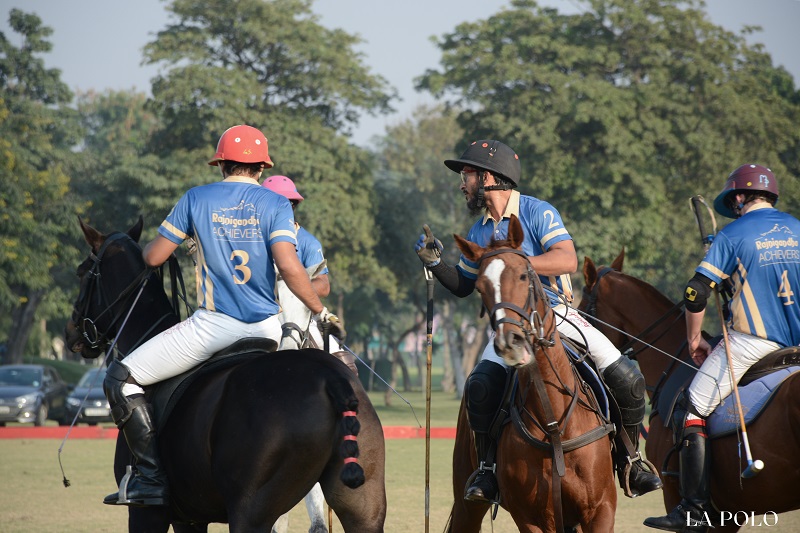 The third chukker decided the fate of the game with Sona Polo largely in action. The chukker started with Padmanabh, popularly known as Pacho in action, where he tapped the ball and stroke it in clean shot, but coming into action Pranav Kapur, also known as PK saved the ball with a back hand, although he gave a good swing but missed the ball. Portraying teamwork, Abhimanyu Pathak came in to save the ball but was attacked by Salim. But even then, Abhimanyu Pathak finally stroke the ball in full swing securing the second goal for Sona Polo. Soon after this, Sona Polo was once again benefited by a 40 yard penalty where Mazzini stroke the ball but could not achieve a goal as Matthew Perry came in like wind to save the goal. Following the rule, Sona Polo was granted yet another penalty shot but this time it was a 60 yard penalty shot and Abhimanyu Pathak came in to take the strike. On the whistle of the umpire he stroke the ball but the swing as light. When everyone lost the hope the ball just rolled out of the goal post. Abhimanyu Pathak had a surprised smile over his face as that dying ball changed into the third goal for the team. The chukker got into action once again with the umpires throwing in the ball. As soon as the umpires signalled the game to get into action, Padmanabh took the ball without wasting any seconds. He tapped the ball and stroke it which went to a little left of the ground. Stretching his pony, Padmanabh reached the ball and just saving the ball from going out of the boundary stroke a cut shot in full power. The audience cheered in amusement and applause after witnessing the fourth goal of Sona Polo. The team by the end of the third chukker had made a splendid lead with 4-0.

After half time the game galloped into fourth chukker. The action started with Abhimanyu Pathak on strike for a 60 yard penalty shot. If he scored this, Sona Polo would get one more goal in their account, but Abby unfortunately missed the goal. After which, Pranav Kapur got into play who took the ball all by himself towards the goal post. But just when he was close to the goal post, Mazzini came in stretching his pony and with a lofted bank hander took the ball away from his contact. Rajnigandha Achievers could feel the pressure of the game building. Just then, Matthew Perry got a chance to strike a penalty shot but unfortunately he missed it too. It was as if the fate of the game had already been decided. Even then, Matthew did not lose hope and came into play. He chanced the ball, but was counter attacked by Pacho's back hand. The fourth chukker wrapped with no more progression in the scores and Rajnigandha Achievers had to still open their account. 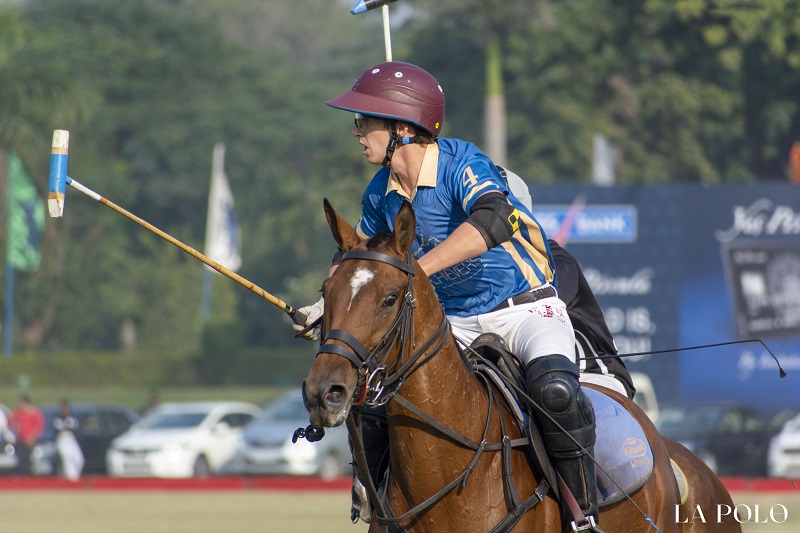 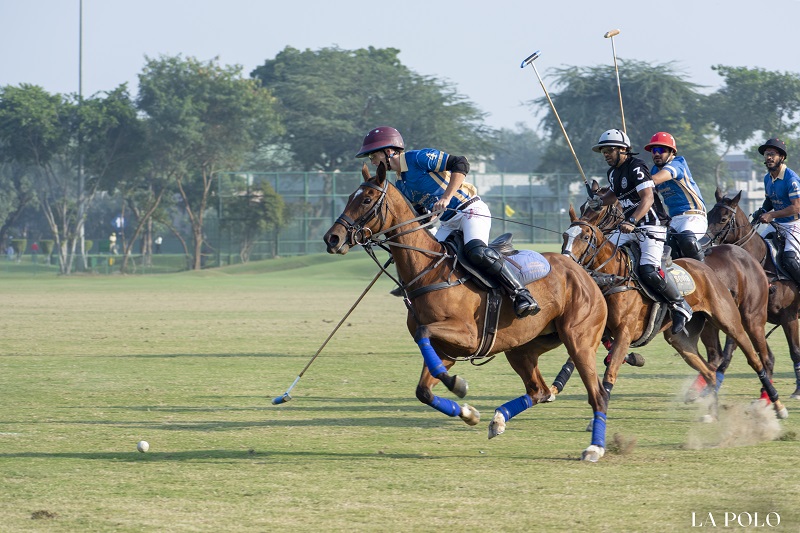 The fifth chukker started off and got into intense action with both the teams defending in full swing. In all the hustle, Pranav Kapur initiated the ball towards the goal post which eventually evolved as the first goal for Rajnigandha Achievers. The chukker did not see any more progression in the scores and wrapped at 4-1.

The final chukker got into action with Mazzini striking the fifth goal for Sona Polo. After this, Mazzini stroke the ball again, he made ways toward the goal post by stretching his pony. The game turned into a horse race with one player after the other. Mazzini takes a long shot but missed the strike as the ball went past the back line. Once again, the game got into play and Padmanabh passed the ball after a lot of effort near the grandstand. In a long shot he passed the ball to Abhimanyu who tapped the ball to the goal post but lost the grip due to a bouncy ground. Sona Polo missed two chances back to back and adding into the list, even Padmanabh missed the ball. After three consecutive misses by Sona Polo, Gaurav Sahgal took a chance and scored the second goal for Rajnigandha Achievers in the dying minute of the match. There was no chance now that Sona Polo could be defeated. The match wrapped at 5-2, and for the second time in a row, Sona Polo lifted a 14 goal trophy. With this victory, Sona Polo achieved a total of three wins in the complete season. The match ended with a prize distribution ceremony where Sona Polo lifted the Yes Bank Indian Masters 2018. The Most Valuable Player was awarded to Abhimanyu Pathak, while the Best Playing Pony was presented to Padmanabh's pony. 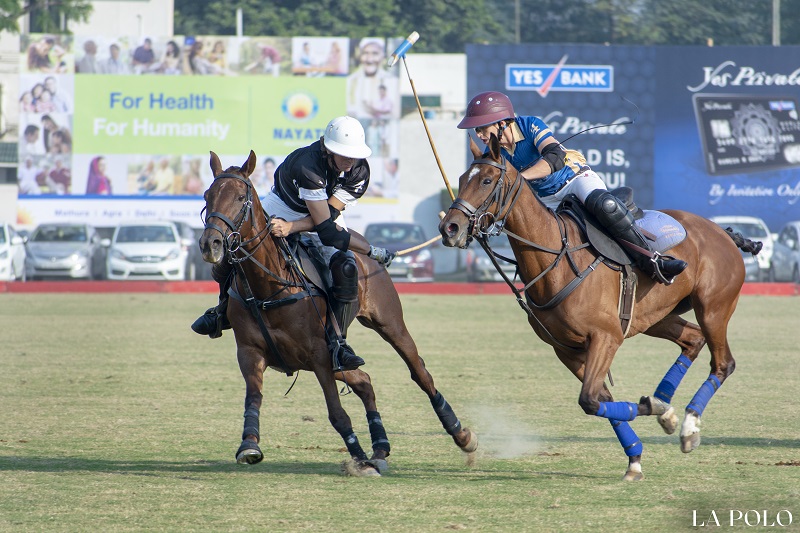 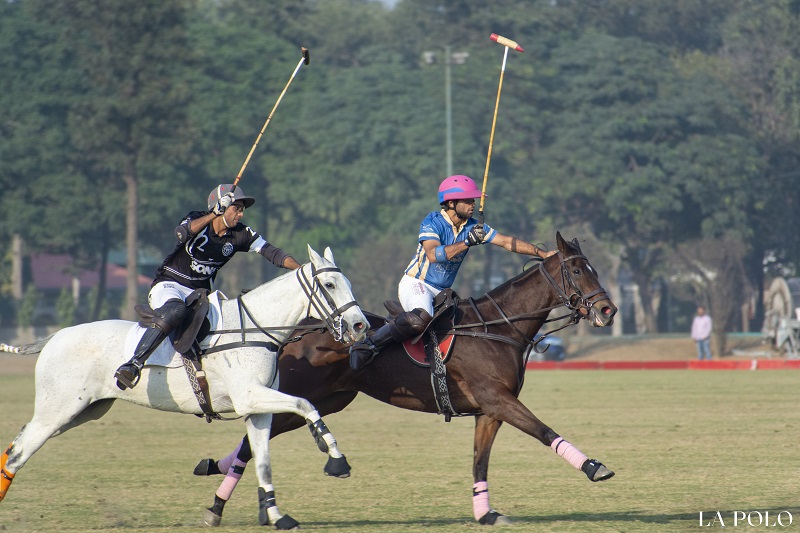