The GAUNTLET of Polo winded up with the CaptiveOne U.S. Open Polo Championship finals which were played on 21st April between Team Pilot and Las Monjitas.


One of the premier Polo destinations in the world, The International Polo Club Palm Beach hosted the 3-month long, $ 1,000,000 purse GAUNTLET of Polo from February to April in which 3 tournaments of 22-goal each were played. Hosting the largest field of high-goal teams and the most prestigious Polo tournaments in the United States, the International Polo Club witnessed some of the greatest Polo players compete for the GAUNTLET. The GAUNTLET of Polo winded up with the CaptiveOne U.S. Open Polo Championship finals which were played on 21st April between Team Pilot and Las Monjitas. The GAUNTLET of Polo is a true survival of the fittest as the biggest names in the world of Polo, the world's preeminent teams and some of the finest horses came together for three months to battle head-to-head for the coveted C.V. Whitney Cup, USPA Gold Cup, and the CaptiveOne U.S. Polo Championship. The inaugural year of the GAUNTLET of Polo saw the best competitors in the world along with the prize, which was richest in the sport and became one of the toughest tests in the game. The rule for winning the $1,000,000 check - Any team who consecutively sweeps all the three tournaments will receive a $500,000 bonus totaling $1 million in prize money and earn their place in history as the inaugural GAUNTLET Champion. 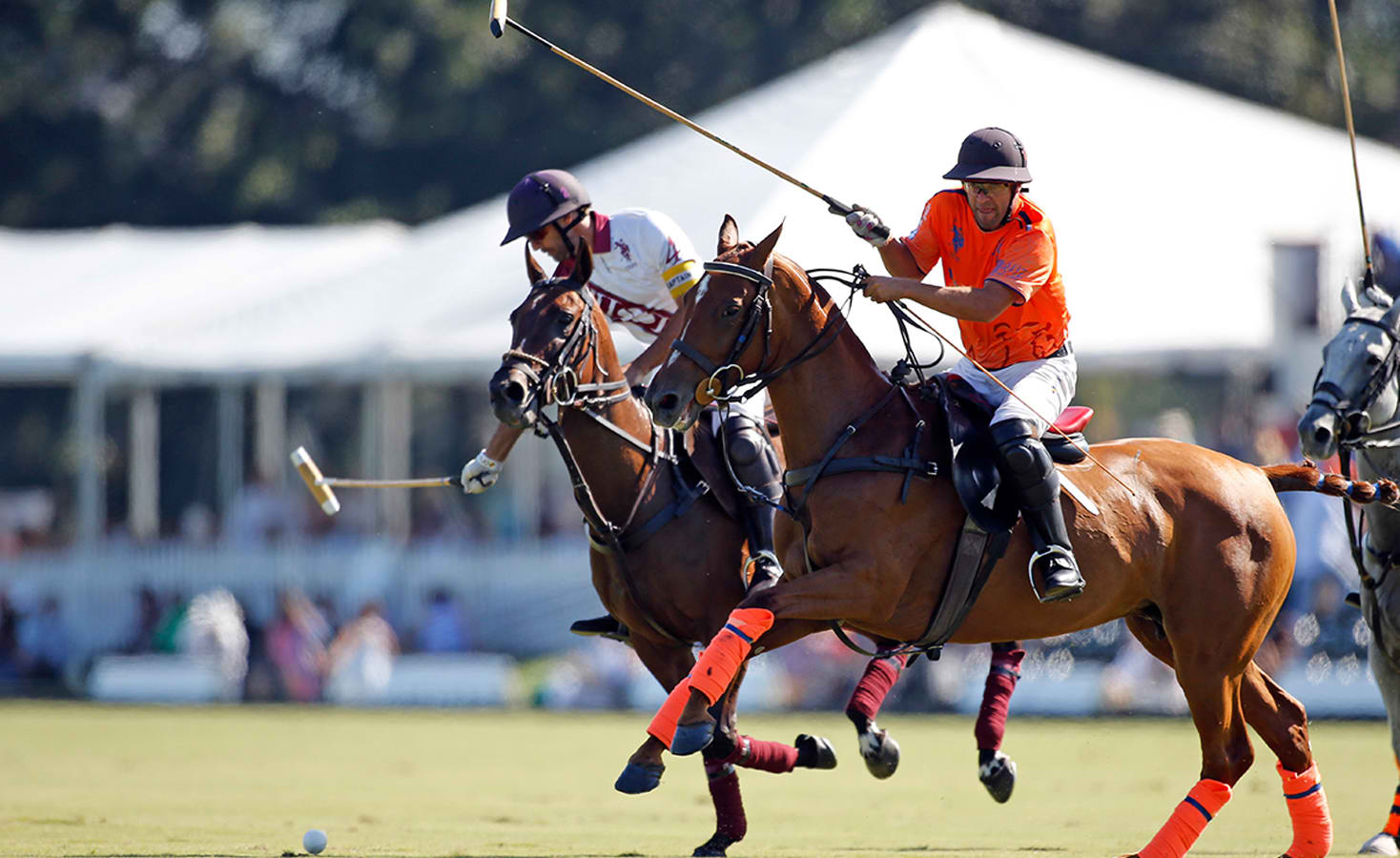 Drifting past each of their opponents in the C.V. Whitney Cup and USPA Gold Cup, Team Pilot, taking forward their undefeated streak, stepped into the final leg of the GAUNTLET OF POLO, with the objective to continue their undefeated streak. Seeking not only the prestige associated with the inaugural title but also the potential $1,000,000 prize. Undefeated throughout the tournament, Pilot produced a stellar performance to face the finalists, Las Monjitas with 5 wins and no losses for the CaptiveOne U.S. Open Polo Championship final on Sunday at the International Polo Club palm beach. Exploding from the first throw-in, brothers Facundo and Gonzalito Pieres, secured two field goals within the early minutes of the play. Pilot drove off the freight train in an offensive motion for which applying the frictional force would have been difficult for Las Monjitas. Adding to their scoreboard with a quick field from Matias Gonzalez and a penalty conversion, team Pilot drove off the scoring with an impulse in their speed making it difficult for the opponent to catch up. A commanding lead for Team Pilot with no goals on the board by their opponents shifted the match towards their side.

Scoring the first goal for Los Monjitas with retaliation against Pilot’s aggressive onslaught, Francisco Elizalde hammered a neck shot and opened the scoring for his team. Francisco Elizalde and Facundo Pieres mirrored each other’s action to score off from the penalty for each of their sides. Even though Las Monjitas was unable to score and missed a few scoring opportunities, the defense of the team knew how to silence the 10-goaler Facundo Pieres as they marked him strongly and reduced Team Pilot’s scoring chances. Reducing the lead to just two goals with one more goal from the penalty spot, Francisco Elizalde helped Team Pilot come back into the frame and the half ended with Team Pilot leading by 5 - 3. 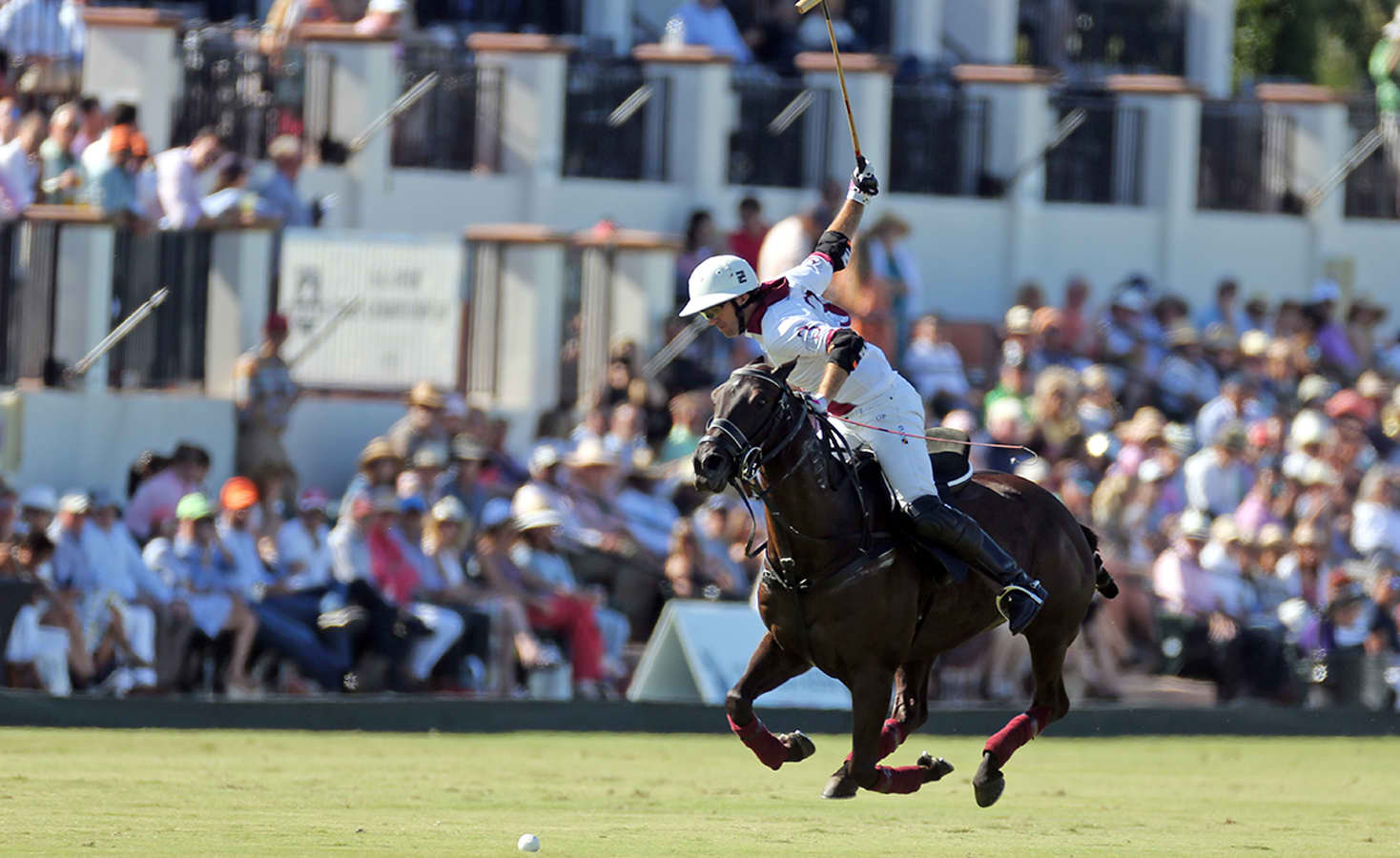 The second half of the play began with Pilot regrouping their play and strategies to showcase an undeniably strong fourth chukker similar in aggressiveness and intensity to the first chukker. Facundo Pieres missed an open opportunity of scoring from the Penalty spot but made up for the miss with two consecutive field goals which he scored in no time and had the opposition’s defense by surprise. Matias Gonzalez followed closely with an impressive neckshot from over 100 yards to add another one in Team Pilot’s bag. Single-handedly trying to lead the charge for his team, Elizalde countered back with a self-assisted field goal but fell short of the goal bullets fired by Team Pilot. Scoring rapidly, Team Pilot didn’t miss a single chance of scoring in their pursuit of the GAUNTLET title and relentlessly scored to increase their lead. Facundo Pieres, the captain of Team Pilot, led the attack for the team from the front, as he ran with blistering speed to overcome his opponents. Hilario Ulloa put down a strategical play to add one in Los Monjitas’ bag within the last 40 seconds of the chukker play. Las Monjitas headed into the sixth and the final chukker with the scoreboard favoring Team Piot by 10 goals to 5.

Gonzalito Pieres, demonstrating his exceptional skill and ability in the final chukker, stole the ball from Hilario Ulloa and continued his drive to score putting Team Pilot ahead by 6 goals. The Pieres brothers powered the Pilot’s force and didn’t allow Team Las Monjitas to gain any momentum. Sweeping the final 12 - 7, Team Pilot continued their winning streak and lifted the third tournament of the GAUNTLET, CaptiveOne U.S. Polo Championship, too. After his team became the champions of the inaugural GAUNTLET and solidified their name in the history, Curtis Pilot said, “The key for our team is a great organization, but it extends all the way to the grooms, trainers, and pilots who take care of the horses. Our team manager Gonzalo de la Fuente put it all together and without that, we would not be here today. It did not happen by accident, we just did the best we could every day.” 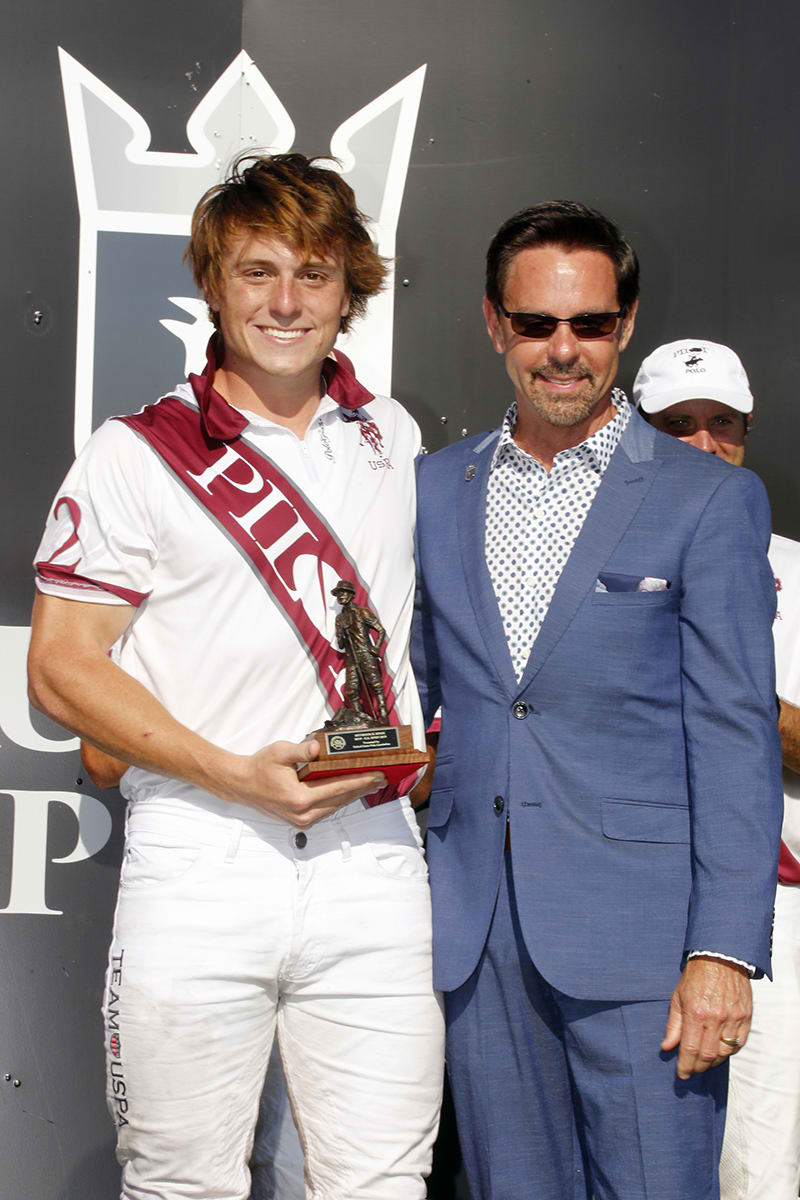 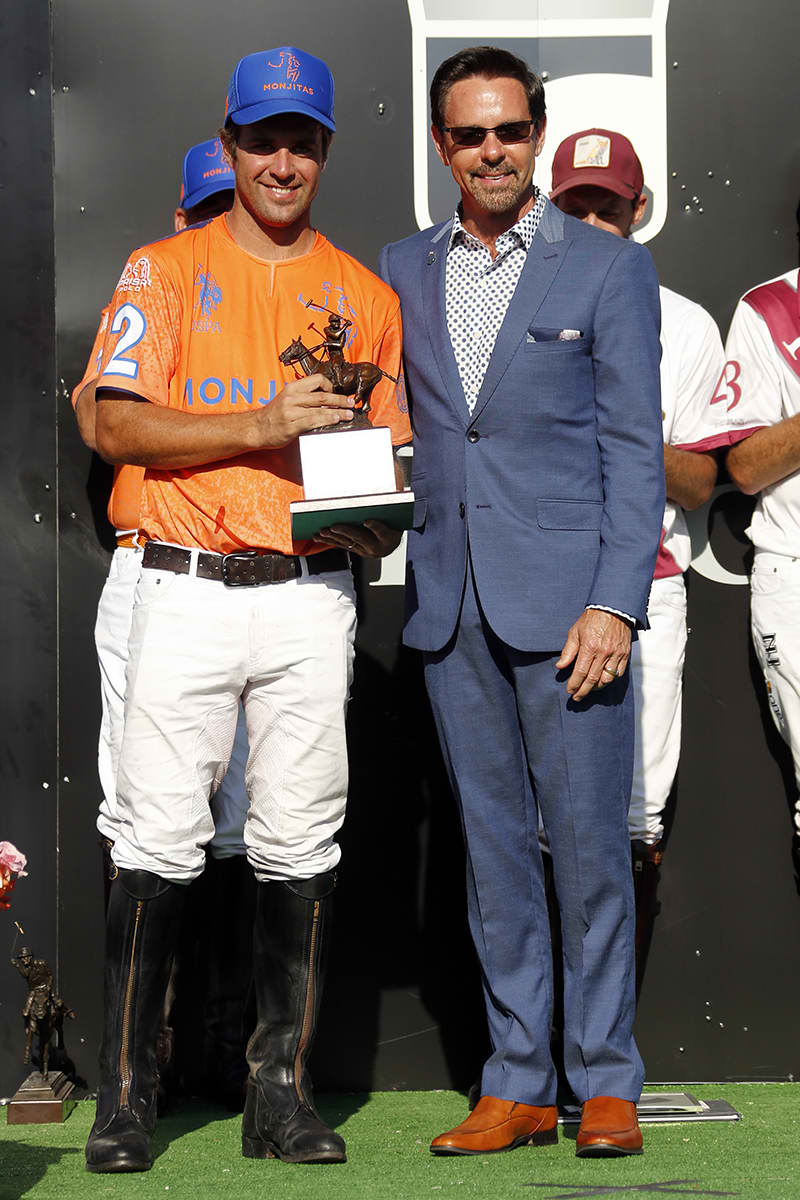 Team Pilot won the $1,000,000 million purse along with the honor of having their names inscribed on the inaugural GAUNTLET trophy. Facundo Pieres, talking highly of his elder brother Gonzalito, exclaimed, “He had an amazing day. It was by far the best game he played in the season and the team needed him today. He is one of those players who will always prove his mettle in the important and intense moments.” Reflecting over the course of the season Facundo Pieres said, “It was a long season for both the players and the horses. Our team did a great job throughout and we had to keep the winning streak. If we had lost today it would have been difficult for us, so we felt the pressure of winning the GAUNTLET. Winning 16 games in a row is not possible without the vets, horses, groomers and most importantly the determination and the passion of players.”

Most Valuable Player of the CaptiveOne U.S. Polo Open Championship Final was won by Team Pilot’s Matias Gonzalez and the GAUNTLET OF POLO Most Valuable Player was presented to Las Monjitas’ Francisco Elizalde. “I can check that off my bucket list,” Gonzalez said with a smile about winning MVP. “This is a dream come true, I don’t think I can put it in any other way because it’s just a huge honor to win the GAUNTLET here in Wellington where I was raised.” Facundo Pieres’ bay mare Mega Chistosa, ridden by Pieres in the first and sixth chukkers, walked away with the Best Playing Pony blanket. 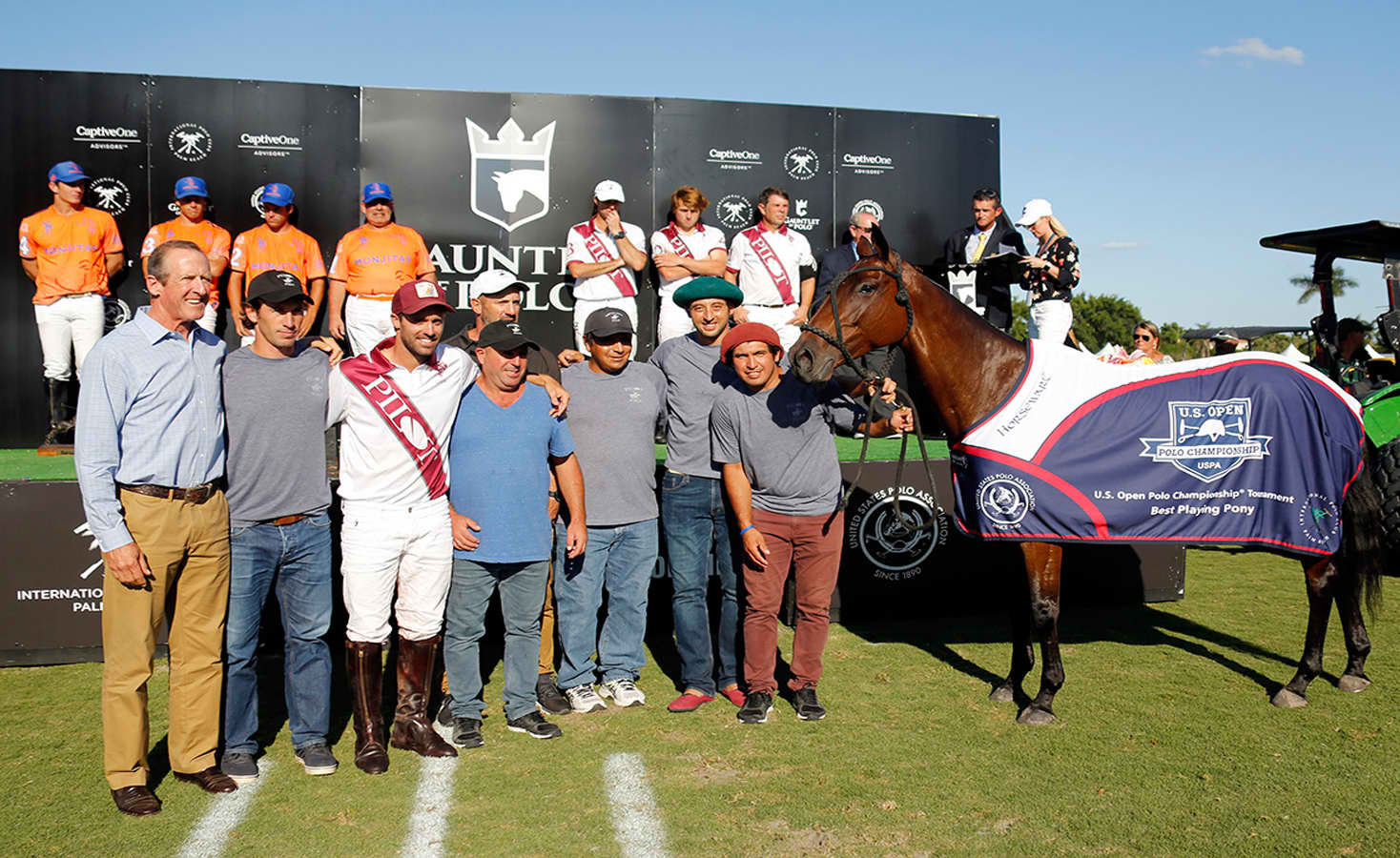