Stretched over a relaxed weekend from Friday 6 to Sunday 8 September, the event once again proved to put to sight a classic selection of 60 rarest cars from around the world. So rare, some of these cars had never been seen before in the UK.

Concours d’Elegance saw its beginning as a car exhibition in Windsor Castle in 2012. Graced by the presence of people who belong to the glitz and glamour world in 2013, it moved to St. James palace. In 2014, the Hampton Court Palace at the Palace of Holyroodhouse in Edinburgh, once again exalted as the perfect location. In 2015 it returned to Windsor Castle and again the Hampton Court Palace in 2017.

This year was UK’s eighth Concours competition. The cars participating in the event partook in a 2-day driving tour in the days running up to the main Concours event. There were on display sixty of the world’s rarest cars varying from the classic pioneering models to the present day participating in the historic car collector award show. Introducing a unique twist this year, the winner was selected by the owners of the cars themselves where each participant was made to vote for other models on display, thus deciding the “Best of Show” car.

Inspired by the Avion-Voison winged mascot, ‘La Cocotte’, the Pullman Trophy was awarded to the best car. It was presented at the Dinner Celebration by HRH Prince Michael of Kent who is himself an avid motoring enthusiast. Apart from being the President of the Royal Automobile Club he is also an Honorary Member of the Bentley Driver’s Club and the British Racing Driver’s Club. In fact, in 2013, he drove the mighty 1933 Napier-Railton 24 litre Special from the Royal Mews at Buckingham Palace, to the 2013 Concours at St. Jame’s.

Concours d’Elegance has seen the best array of cars through its legacy of the Best of Show cars award. In 1919 the Rolls Royce Silver Ghost was popularised by Lt. Heneral His Highness the Maharaja Sir Bhupindra Singh of Patiala who owned 25 of these Rolls Royces. This beauty made in polished aluminium bodywork was inspired by French coachbuilder Henri Labourdette’s work whose famous Art Deco bodies on Rolls Royce in 1913-14 mesmerised the Maharaja.

The winner of the pre-1920s was the first six-cylinder car in 1903 which was presented as the oldest known surviving example of its kind. This classic piece built by Napier came back to England after six years of restoration in India under the name ‘Noiseless Napier’.

The 1920s winner, the Bentley Speed Six Old No. 1, built as a racing car was owned its entire lifetime by either the factory or Woolf Barnato, also known as the “Bentley Boy”. This legendary car had to be constantly modified to keep it competitive.

The 1930s winner was a car that owes its legend to a meeting scene during World War II in Morocco between General Eisenhower and Charles de Gaulte. Known as the Stout Scarab, there was a total of only nine scarabs made with its original designed being owned by a Parisian publisher.

The Ferrari 166MM won the Best of Show car Award in the 1940s. This amazing car is reputed to be in the hands of Luigi Chinetti and Lord Selsdon to win the 1949 24 Hours of Le Mans and two months before that the Mille Miglia.

The 1950s saw the Pegaso Z-102, a green prototype which came to be the world’s most advanced and fastest production. The original was a cabriolet filled with a smaller 247cc engine.

The Ford GT40, which is one of the most original racing cars of its type, won over the position in the 1960s. And then finally came the post-1970s, which saw the victory of the McLaren F1 which were a limited edition of only 106.the car has recently been given a full restoration by the McLaren Special Operations.

The Concours event also spread ways to satisfy people who are up for luxury shopping with fashion brands like Lock & Co. Hatters, Henry Poole, art houses like Collier and Dobson, pop-up boutiques like the fine horologists A. Lange & Sohne and their intricately crafted German timepieces and more. 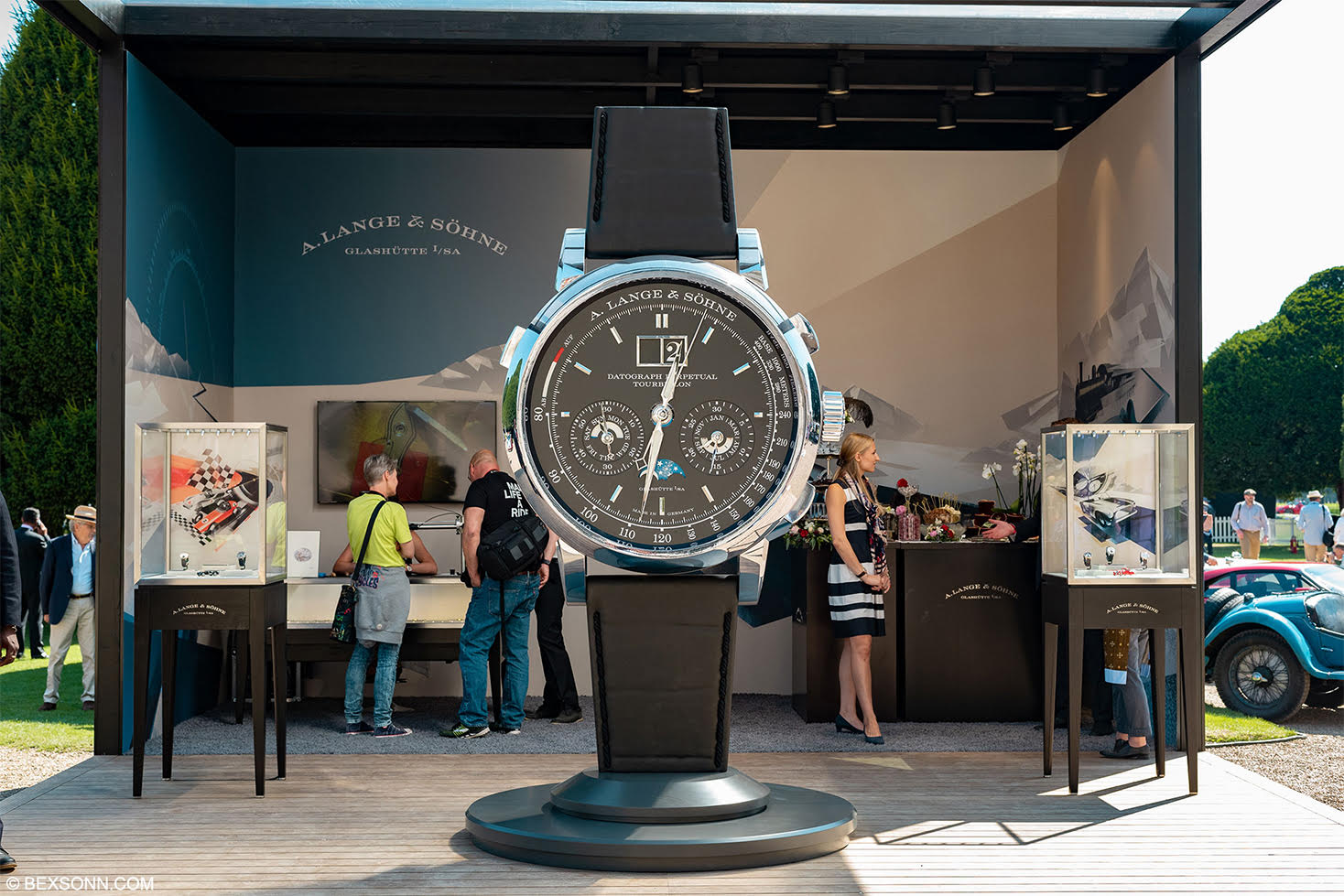 This time Concours has partnered up with Tom’s Kitchen for the 3-day event for savoury meals. The Tom’s Kitchen restaurants and delis use UK based suppliers and local producers, promising fresh, seasonal, ethical dishes in relaxed and informal settings.

A 100-seater restaurant has been set up in a picnic-like setting with a menu curated with delicious British dishes specifically designed for Concours by British Chef, Tom Aiken’s. The picnics were elaborately laid out for every individual, with jute bags, filled with completely biodegradable packaging and cutlery, a bottle of Kingsdown still water. The meals contain special maincourses for both vegetarians and non-vegetarians with generous amount of cheese, a fruit box, and ending with a strawberry and white chocolate dessert.

Tom’s Kitchen has partnered up with Patron Tequilla for the three-day event where they will be serving a gamut of Patron cocktails including the special Patron Paloma, the Watermelon Punch and the Patron Margarita.

This year, Concours witnessed the attendance of some of the most leading car manufacturers like Alpine, Aston Martin, Ferrari, Ecurie Cars limited, Geely and Ginetta.

Alpine has in store the culminating product of style drawn from the iconic A110 Berlinette- The Alpine110 Pure. This new car is a link between Alpine’s heritage and future. The design team, led by Frenchman Antony Villain, has grasped the spirit of Alpine while also introducing a new design that that proves to be time-tested. The interior of the car is finely fitted with lightweight Sabelt sports seats, matte carbon fibre interior trim and aluminium passenger footrest. Mounted behind the passenger compartment, the engine is a turbocharged four-cylinder, it has a 1.8 litre direct injection engine and with emotive sports car soundtrack.

Aston Martin, with its DBS Superleggera Coupe and Volante are proven beauty. It vibrates the most beautiful automotive art and at the same time adding an element of dark brutality of unmatched strength. The shape of the Superleggera is still kept uncompromisingly Aston Martin, but enhanced with stronger, broader and muscular than ever. The front view is dominated by its hexagonal grille. It has a mighty 715bph engine. The interior is beautifully knit in leather and fitted with seats that support the body to perfection. It is made with Carbon Ceramic breaks in conjunction with 21” forged wheels.

This year, the event called the Specialist’s Showcase put up on display the works of some of the leading automotive specialists of UK who own world-class companies. Concours offered the opportunity to the visitors to peruse some of these rare and incredible cars. Some of the cars in the exhibition were Chicane, CMC, Fiskens, Frank Dale & Stepsons, Nicholas Mee & Co, Thornley Kelham and Tom Hartley. The objective was the restoration aiming at sales of the world’s most incredible cars, which they had access to. 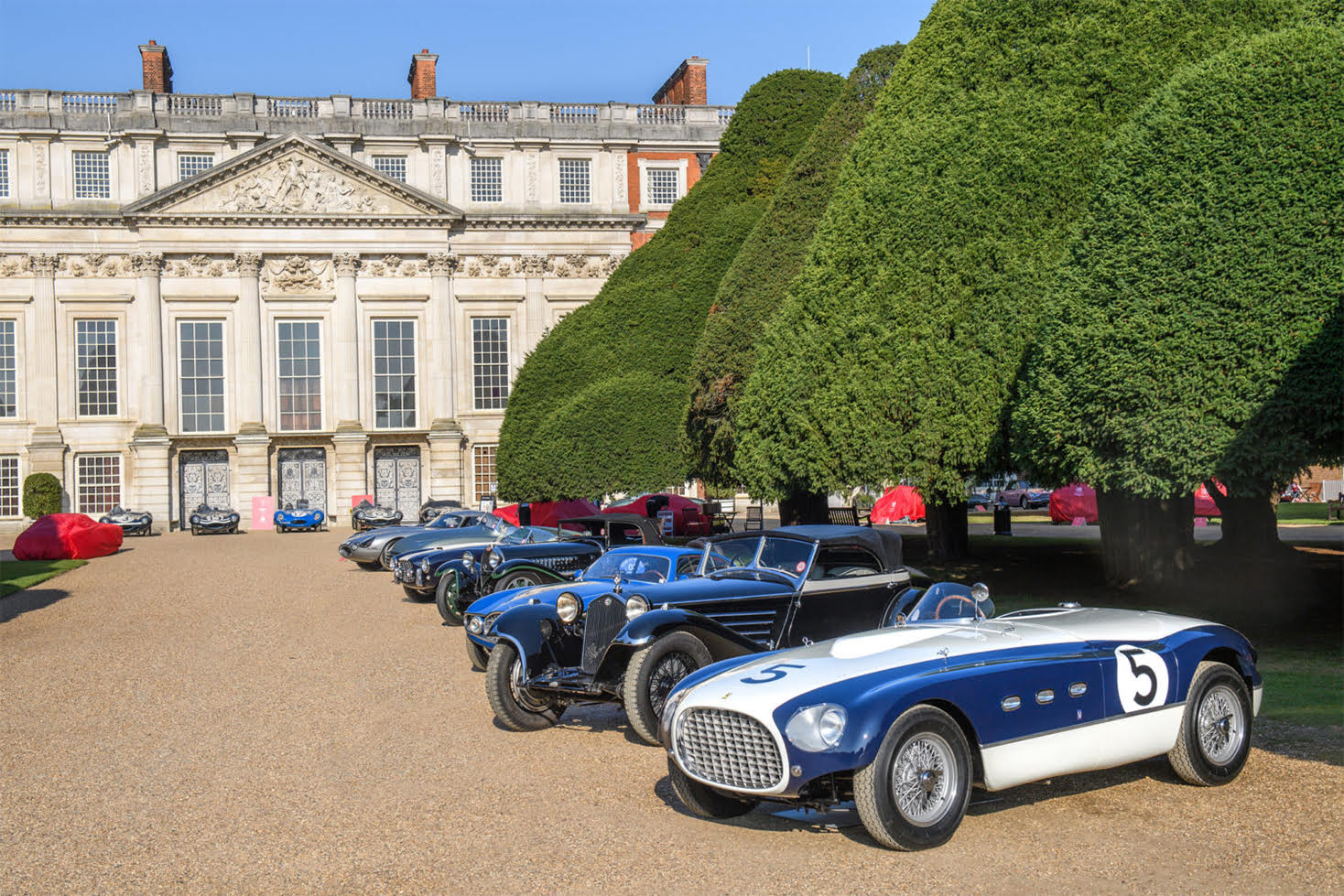 The three-day weekend gala had a specialty planned for each day. Friday, the 6th of September bore the main event of Concours- the Grand Arrival. Like any other year, this part of the show was an absolute delight for spectators. This season, over 100 years of automotive excellence decorated the event with sixty of the finest cars. These cars drove into the Hampton Court Palace and positioned themselves for the weekend. 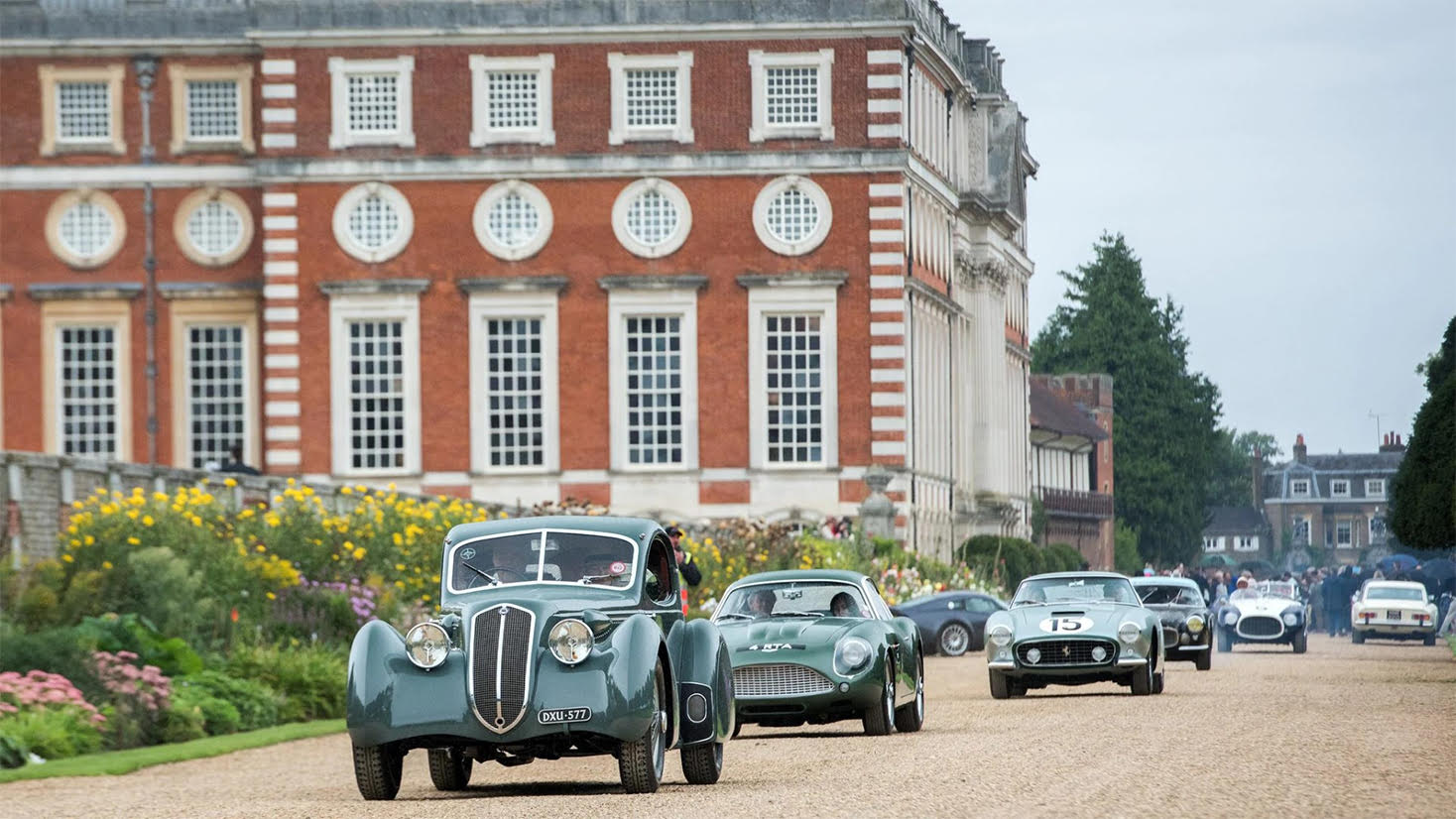 On Saturday, the 7th of September, was the day of the Club Trophy. This event witnessed the presence of some of UK’s finest car clubs including Aston Martin Owner’s Club, Bentley Driver’s Club, Jaguar Driver’s Club, the Rolls Royce Enthusiasts Club. They exhibited 40 of the rarest and most exquisite cars of their members at the Concours. There was an independent panel of expert judges where last year’s Aston Martin chief designer, Marek Reichman along with HRH Prince of Michael of Kent and Classic and Sports Car editor Alastair Clements, unanimously called for a winner. This year’s winner was the Vauxhall 30-98 which is a car almost hundred years old. It was first owned by Argentine horse breeder who purchased it from Harrods in Buenos Aires. This car will be on display on the Concours 2020. 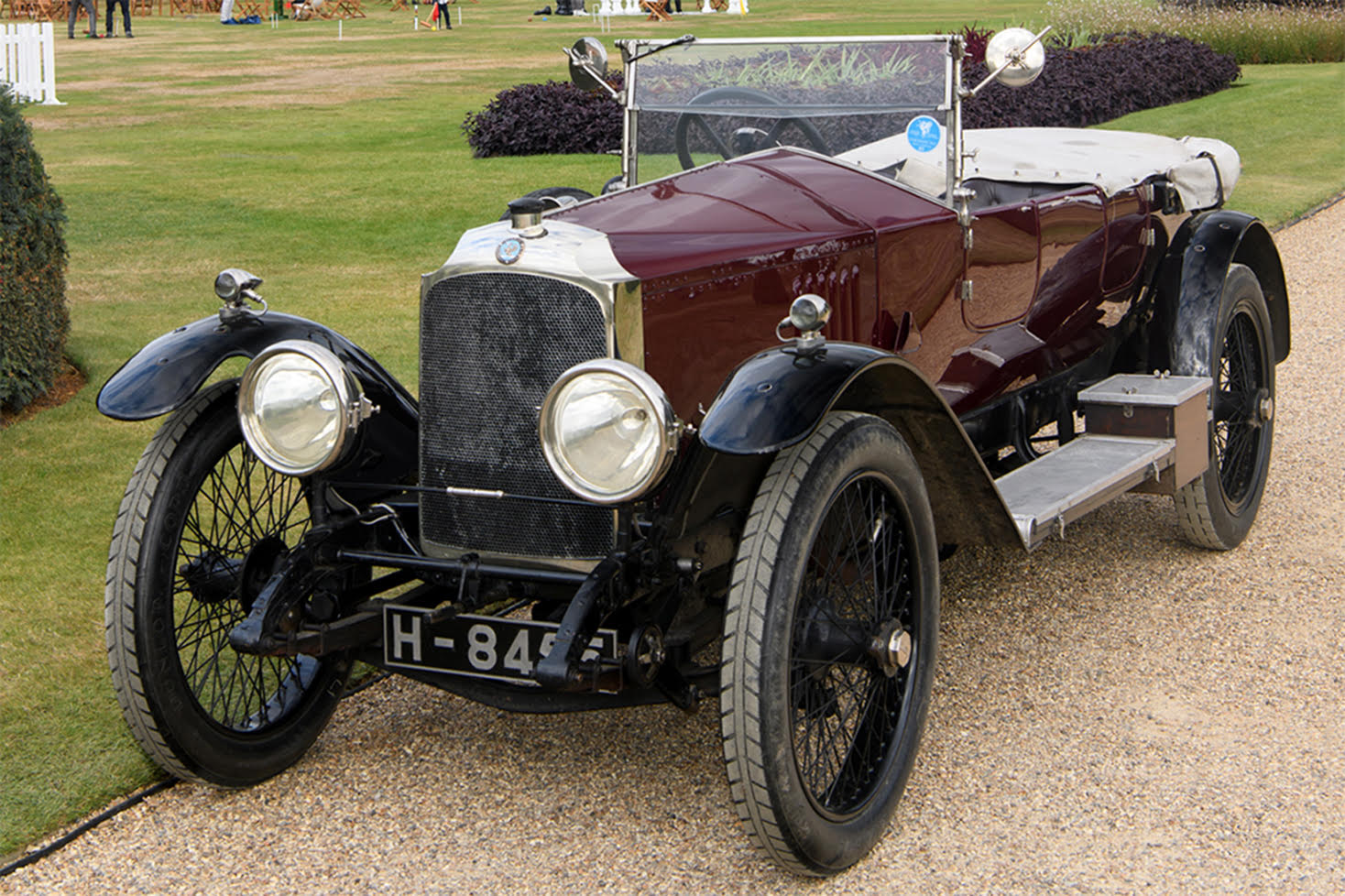 This year, the Bridge of Weir Jaguar Trophy was awarded to C-Type. This car has won a reputation of one of Jaguar’s esteemed racing cars. It is well known from the Monaco Grand Prix where Tommy Wisdom rode it and later Stirling Moss who drove it for much of his 1952 season.

8TH of Concours d’Elegance September was scheduled for the Octane Tour, with a 90-mile cross-country route which ended at the Hampton Court Palace. The competition opened with a scrumptious breakfast at Cliveden House followed by a happy tour through Surrey and Berkshire ending at the Hampton Court Palace. It was open to all the owners of classic, sports and GT cars, both classic and modern. The attendees enjoyed a three-course lunch with wine served in the hospitality space.

The Concours d’Elegance Hospitality space is located on the Eastern front lawn of the Palace. It is a staggering space set up with marquee and garden. This private lounge area allows the guests to enjoy a comfortable view of the cars. With fresh aid of fresh British produce supplied by a range of Royal Warrant Holders, refreshments were served at an unstoppable pace.

As the event wound up on a Sunday afternoon, there was one last presentation for the audience. It was the most apt was to end the weekend show. The Grand Depart had the gardens lined up with sixty of the rarest cars in the world. The grand show got the engines of these cars started and prepared to leave the gardens of the Hampton Court Palace with its spectators waving off to the Concours cars for yet another year.

Complimenting the main event of Concours de Elegance were also hundreds of other luxury motor cars, including one that participated in The Club Trophy which is presently in its fourth year. This event brings some of UK’s most prestigious car clubs offering up their best examples to an independent panel of judges. The winner of the Club Trophy automatically secures a place in the following year’s main Concours of Elegance event.

The 2019 features of Concours included the Aston Martin Zagato celebration manufactured as a part of Zagato’s Centenary. This car was the first variant display of the Aston Martin Zagato. From the 1960 DB4 GT Zagato through to the Vanquish Zagato Coupe, Volante, Speedster and Shooting Brake, spectators will be able to witness 16 examples from one of the most creative partnerships in automotive history.

Concours of Elegance will be celebrating 100 years of Bentley with a display of a range of the most paradigmatic Bentleys ever made. Among them was also the first car to win Le Mans Back-to-back Speed Six ‘Old Number One’- and the car fabled for racing Le Train Bleu across France with Woolf Barnato at the wheel, A Speed Six Gurney Nutting Coupe.

Concours also welcomed the most significant Ferrari in the world as part of a special 70th anniversary celebration of the 16MM chassis, including the winners of all the three races that attended the event.

This two-seater which was designed only for the track was limited to just 24 units globally. Powered by a 7.0 litre V12 engine producing 820bhp, this car is an epitome of fine Formula-One style cars. It comprises of a pushrod suspension, adjustable dampers, adjustable anti-roll bars and variable traction control. 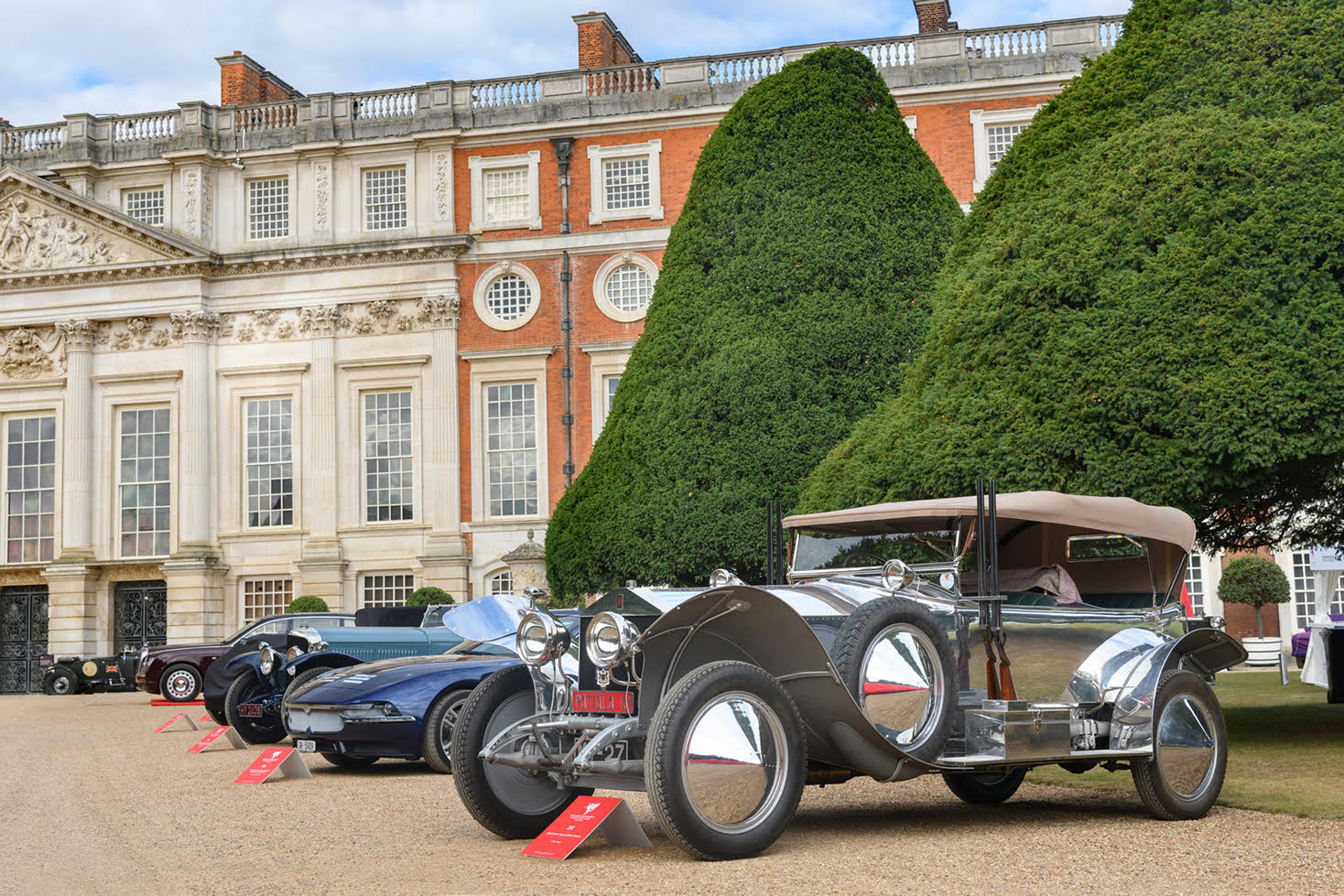