History Of The Polo Game In India

La Polo throws light upon the evolution of polo in India 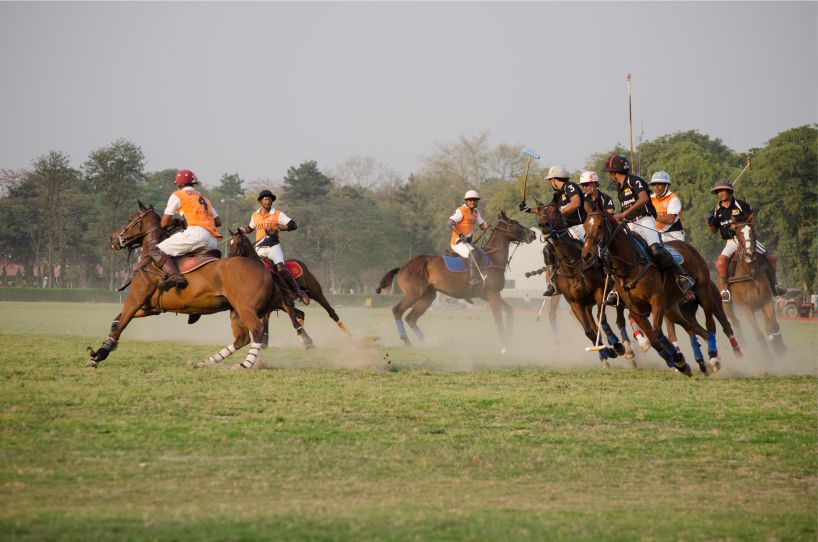 History of Polo in India: The origins of Polo Game

Theoretically, the first polo match was played in Persia around 2,500 years ago. After a period of time, people thought that the equestrian sport was created by contending tribesmen of Central Asia. However, the polo game, played by tribesmen was an unorganised and rough version of polo . Eventually, the sport got hold by the kings as a method to coach their cavalries. Ergo, even at present, the factual origin of the sport is unknown.

Moreover, as suggested by scholars and historians, the richest accounts of polo can be traced through Indian, Persian and Chinese literature as well.

In the year 1860, two British soldiers Lieutenant Joe Sherer and Captain Robert Stewart had a pleasant sojourn in Manipur (North-Eastern State of India). During the stay, they witnessed some locals playing a game on horseback, chasing and hitting a ball with a stick. On the other hand, being professional horsemen themselves, the soldiers got fascinated with the play. Subsequently, after arriving back to Kolkata from Manipur with the reminiscent of the game, perhaps, being their base camp at that time, Lt. Sherer and Capt. Stuart put forth an idea of making it a proper sport. Finally, goal posts were planted, 4 team members per team were decided, and the Calcutta polo Club was established in 1860 at the dispersion of the two soldiers.


Likewise, after the advent of the Englishmen in India, the game of polo was organized and later, made popular in the country. 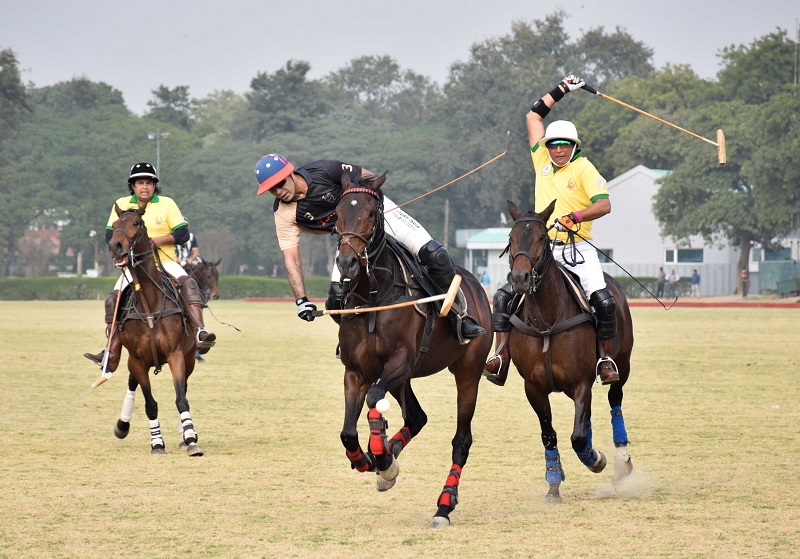 The fulcrum of polo in India was established in 1892 as the Indian Polo Association (IPA). There were some famous polo teams at that time, such as the team of Alwar, Bhopal, Bikaner, Jaipur, Hyderabad, and many others as well. But, the best among them were the Central India Horse, Prince Albert Victor Own Cavalry, and the 10th Royal Hussars.

Polo Game in Manipur
Admittedly, Manipur is the key to modern-day polo because the origins of the polo game in Manipur provides a mythological aspect of the game. It is saturated with the culture and folklore of Manipur in such a way that rich sequences in festivals are devoted to the game of polo. Also, it is embedded in its literature which originates from that period with several mythological books of the state such as ‘Thangmeirol‘ and ‘Kangjeirol’, making references to the game. 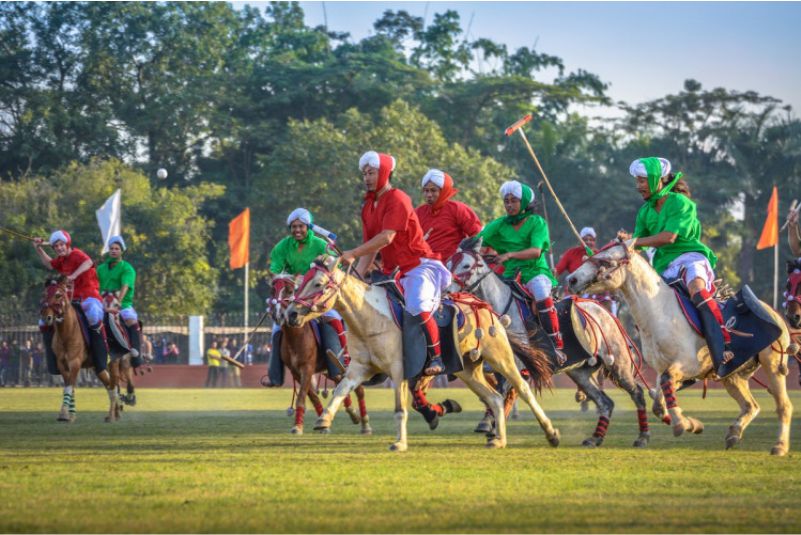 Ancient folk games, precursors of many contemporary sports, were characterized by several different factors, regardless of whether the mode was equestrian or pedestrian. There was wide variation regarding the number of participants, the ground’s size and shape, the amusements time span, and its regulations. Folk games were a deeply ingrained custom in most communities. A form of lacrosse among Native Americans, knappan in Pembrokeshire, Shrovetide football in Ashbourne, hurling in southwest England and Ireland, golfing precursors such as pall-mall and kolf in Europe, mounted games in Asia and, more recently, the game of polo in South America had a large following, either as spectators or participants. It was usual for most of a village’s inhabitants to show up for the game.

According to official records, polo game in all its modernity, was being played in the state during the 19th century, but folk tales give an entirely different story to share. Allegedly, Manipur has polo not just among the mortals, but also has Marjing, who is considered the God of polo and has a pony as his carrier as well. Moreover, the Lai-Haraoba festival of the state depicts the life and times of Khori-phaba, the polo playing god of sports. Ergo, these facts indicate that the game has roots in the state from the ancient times and the royal families of Manipuri played a vital part in popularizing the game.

Taking every fact into account, Manipur brought noticeable change to the game and definitely, it is a sports paradise.

Polo Game in Jaipur
In 1933, Jaipur polo team carved a unique and an unbeaten record till date, by winning all the open tournaments in the United Kingdom and the Indian Championship successively from the year 1930 to 1938. However, national disturbance and malice caused by the Second World War gave crippling setback to the sport in the 1940's. Hence, in the Indian context, the whole burden of reviving polo game and maintaining the grounds fell on the Indian Polo Association. After a series of discussions, conclusion was designed that in order to revive the equestrian sport in the country, the country has to invite several foreign teams of polo, which would play exhibition matches at different locations across the country. In 1950, the Argentine Polo team was invited by India to take part in its tournaments in Jaipur, Delhi and Bombay. In 1955, the Pakistan Army Polo team was invited in a similar series of events. Both these visits carry utmost importance towards Indian Polo. Finally, Jaipur, Delhi, Calcutta and Bombay started initiating tournaments in the country at faster pace. In this initiative, Calcutta took the lead as Polo was a popular game among the sports-loving people of Bengal.

In 1957, an official Indian polo team was send to take part in the World Championship in France that includes Major Kishan Singh, Kr. Bijay Singh, Rao Raja Hanut Singh and H.H. Maharaja of Jaipur. India made a huge impact during the championship, beating all other international polo teams. 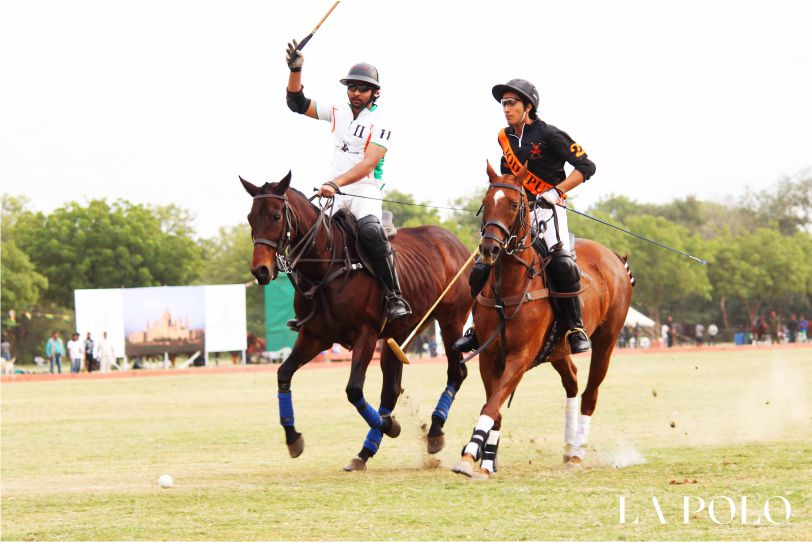 Contemporarily, like a store of gifts for polo players, Jodhpur falls as equal contributors to the sport in India. It is considered to be one of the quintessential locations for polo tournaments.

Polo Game in Punjab
Referred as the conquer of sports world over, Polo is also known to be the game of the blue blooded, the rulers, the nobles and the aristocrats since ancient era. At present, it is associated more with social status and class. 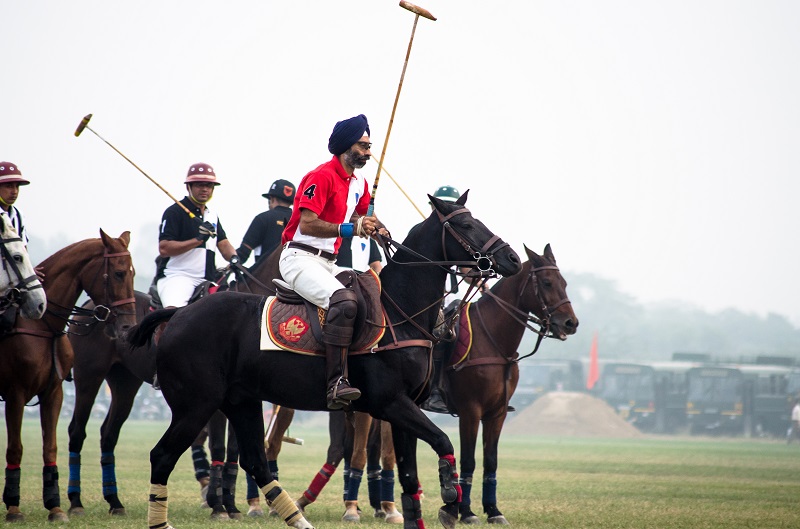 The Maharaja Ranjit Singh Polo Federation aims toward the elevation of equestrian sports in the state. Significantly, Punjab has witnessed the origin of leading the beast The venture has made Punjab witness the inception of an era of equestrian beasts while winning the hearts of spectators. Also, the state conquered a mammoth territory more than the size of around 3 football grounds.

On the other hand, the Maharaja Ranjit Singh Polo Premier Challenge (MRSPPC) in Punjab, has given back the royal legacy, strong strength, class and tradition to the land of kings. The maiden Polo League of the state aims at satiating the hunger for equestrian rage and the craving for luxury of the elite audience.

Polo Game in Delhi
Although, the Polo game has not been the centre of polo in India, but it is definitely the most engaging point for equestrian lovers. Delhi has established a reputation of creating a strong foundation for amateur riders with its Delhi Polo Club. The club was founded in the year 1968 by Late Captain Kundan Singh & American couple (Mr. and Mrs. Douglas). The riding club is now managed by his daughter and professional team, who takes active interest and participates in training the instructors and the young riders. 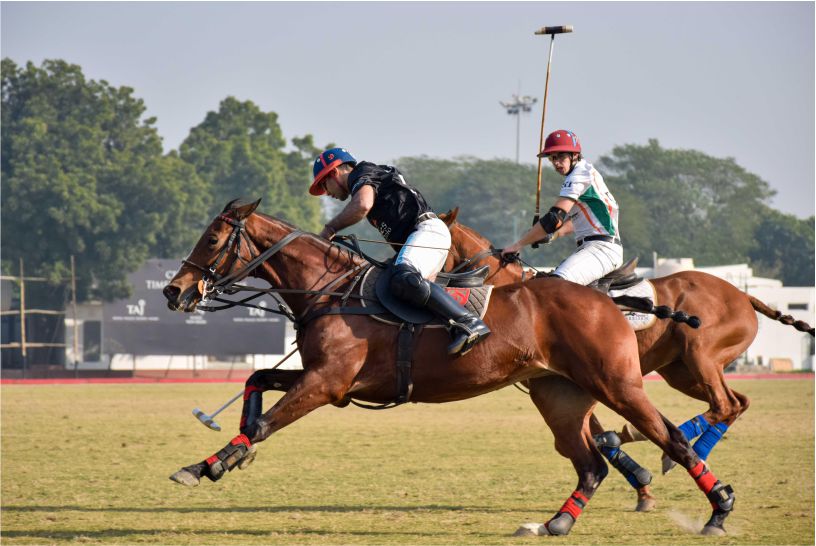 The systematic approach used by the trained instructors ensures that the riders develop confidence over time and practice. It provides a training of riding facilities all through the year on regular membership basis and otherwise.

Notable Indian Polo Players
Here are some of the contemporary polo players who have outstanding handicap ratings with impressive account of achievements.
1.Simran Singh Shergill 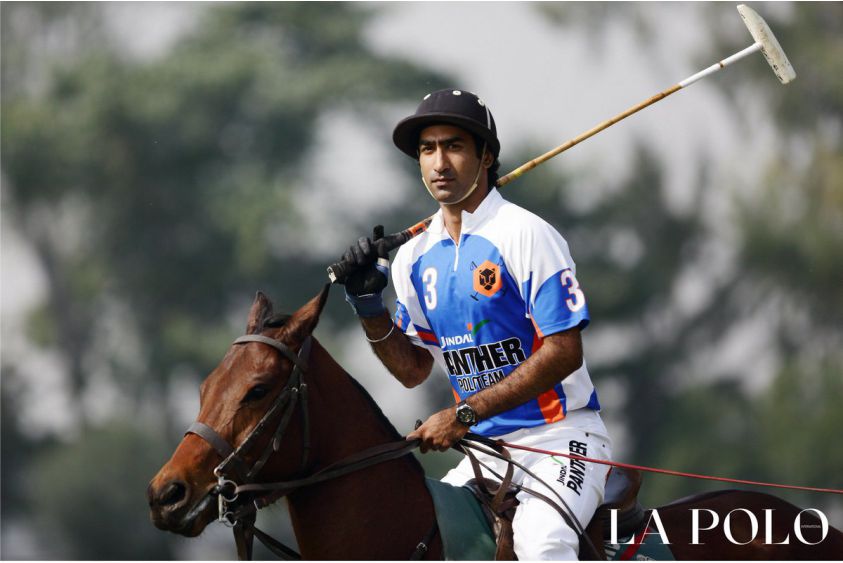 A dextrous polo player with a verve of achieving the highest goal during a tournament, Shergill is ranked at a handicap of +6 goals. He began playing polo in the year 1997, and travelled to Columbia, and Argentina. He was recognized as an ace spring player.
In 2003, he was picked up for the first time in the national team for qualifying at the world championships in Pakistan. He played polo in all the continents during his career as well which makes him a multifariously experienced polo player. In India, he played for all the major teams and has won numerous Indian Opens championships & Indian Masters Tournament. 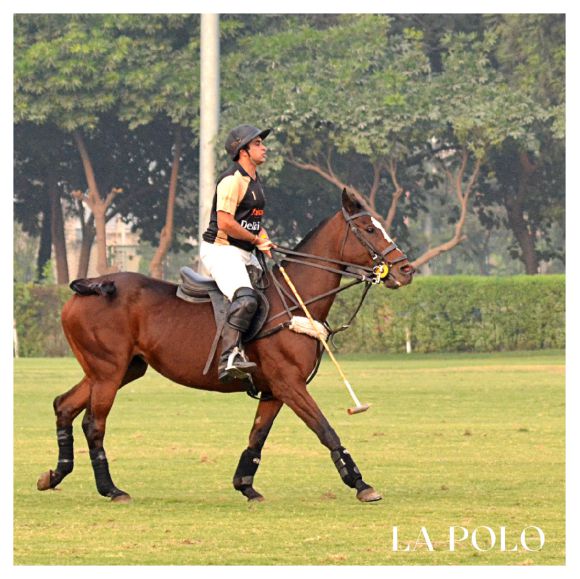 After achieving a handicap of +5 goals, Abhimanyu Pathak has secured his position among the most formidable players on the Indian polo circuit. Despite his non-equestrian background, he always had an inclination towards horse riding. A grounded and focused player, Abhimanyu has been playing professionally for a decade and has won almost every high-goal trophy including the Indian Open. A regular member of Sona Polo and Team Jaipur, Abhimanyu has also been part of the National side on many occasions. 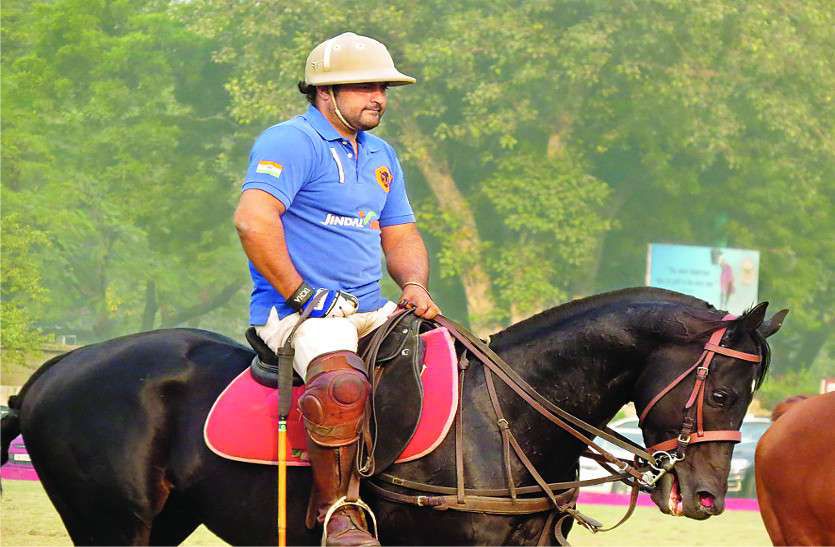 Shamsheer Ali, a six-goal Handicap player at present, started with a handicap of two, but with passion and determination, he notched up an impressive six-goal rating and an Asian championship as well. In order to get into the equestrian sport, his father, Nawab Syed Shujat Ali, had to build a farm and buy horses for him, and his brothers to play. 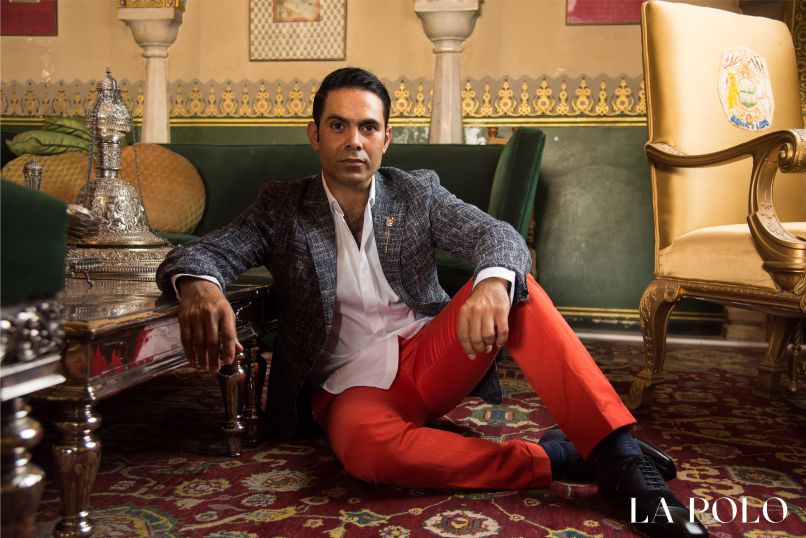 Dhruv started riding at a young age of 8 under the guidance of his father Udaipal Godhara, who was a Cavalry officer and a polo player. Dhruv is named among the world’s highest rated Indian polo player and have reached a handicap of +5 goals. He has long been a part of the Indian polo team, representing the country in four World Cups. 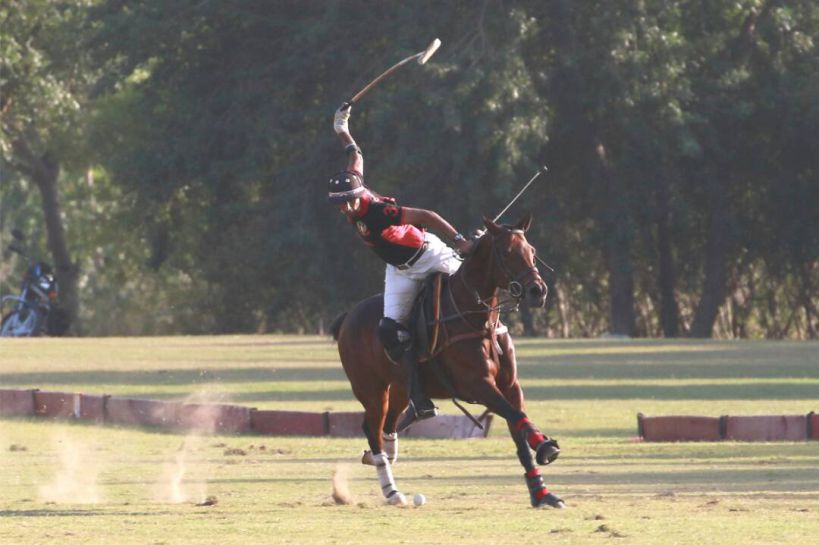 Concurrently, a +5 handicapped polo player, Rathore is a vigorous player to acquire the prime place in the list of highest handicapped player to have arose from Indian Army. He is the Hon. Secretary of the Indian Polo Association. Rathore has been awarded the “Arjuna Award” for accomplishing excellence in sports. He is dazzling and evergreen polo player, who has profoundly contributed in the polo fraternity.


Jaipur Riding and Polo Club
The Club was founded by Col. K. S. Garcha, one of India's renowned polo players and former coach of the Indian national polo team. It is located in a country, known to be the cot of modern polo and the place where perhaps the equestrian sport first came into existence. The Jaipur Polo and Riding Club offer both an energized polo playing experience and resting atmosphere in a resort.

Rajasthan Polo club
The JAIPUR POLO CLUB, formed in 1918, comprised of players mainly from Jodhpur & Jaipur. With the merger of Jaipur State into the State of Rajasthan, the old Jaipur Polo Club was renamed as RAJASTHAN POLO CLUB IN 1957. Rajasthan polo Club is a premier Polo Centre of our Country & has contributed extensively to the inclination of this sport in India & abroad. Jaipur has always been an important and popular polo centre from the spectator point of view.

Calcutta Polo Club
Calcutta polo Club is located in Kolkata, West Bengal. Established in 1862 by two British soldiers Capt. Stewart and Col. Sherer, is considered as the oldest polo club of the world in existence. The club runs the oldest ever Polo Trophy, the Ezra Cup (1880), besides other old ones such as the Carmichael Cup (1910) and the Stewarts Cup (1932). Moreover, in earlier days, matches were played between various royal dynasties of India.

For further input on Polo, please clink on the link below.

Los Polistas: A Brand That Concentrates On The Polo Players

Polo is an opportunity in building relations and connections