The tale of the Kilkea Castle that stands magnificently in the heart of Ireland.


“In the lilt of the Irish laughter you can hear the angels sing.” Ireland, treats each soul with embracing arms, to affirm that every being that visits the land has another soul waiting; the soul of a friend whom you have not met yet. It’s a land bound closely to the past days of tradition, flowing wisely into the present of modernity. It’s a land of vision, magic, life and love, that is alive with the majestic power of stories and longing memories. Ireland smells of old silent stills, piles of stones, half-forgotten taste dwelled in the soft melancholies dipped in quiet smiles of romances. Turas go hÉirinn...

Dropping a sight out of the window of Kilkea Castle, kneeling down, the light breeze washed her chestnut colored hair, while her green eyes were set right on the open fields where at a distant came a man riding the white horse in glory. Smelling of not high end perfumes, but of the earthly essence of grass, waters and horses, the wind convinces a phase of angelic life. Words would remain incongruous until they construe Ireland as the only place on Earth that has been loved, kissed and romanced by heaven in melody, mirth, meadow and mist. 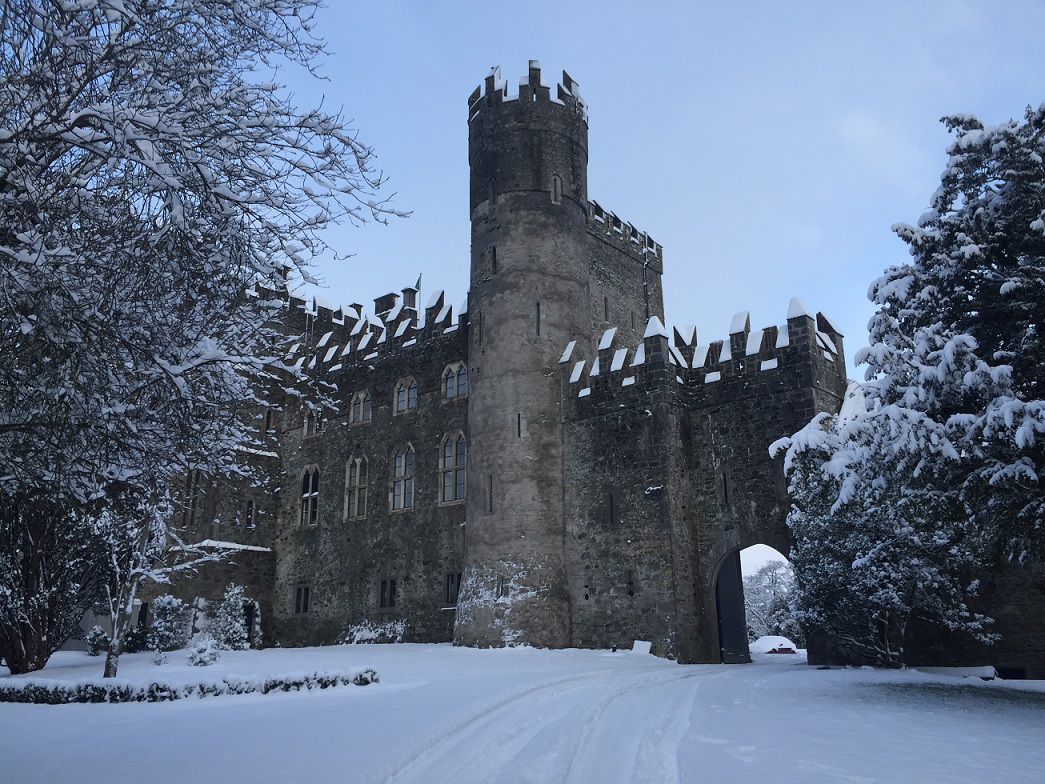 The fantasy of the land has marvelously hallucinated the poetic persona of legends like W.B. Yeats, where on one fine evening of the year 1928, the Irish Poet had stood transfixed around the corner of an ancient Irish tower, overpowered with an uncanny force of emotions for the long surviving Irish Heritage, his pen alighted in strong reverence as he mumbled in the air-“BLESSED be this place, More blessed still this tower; The purity of the unclouded moon, has flung its atrowy shaft upon the floor, seven centuries have passed and it is pure, the blood of innocence has left no stain. There, on blood-saturated ground, have stood Soldiers, Assassins, executioner… I declare this tower is my symbol; I declare this winding, gyring, spiring treadmill of a stair is my ancestral stair.”

Yeats had been hallucinated by a palpably powerful presence of the Irish past emitting from the centuries old walls of the tower. What Yeats had felt while admiring the old heritage, was much more a feeling bequeathed in the very of air of Ireland which affected not just him but anybody who stepped, breathed and surrendered himself to the aura of Ireland. “The pillar towers of Ireland how wonderful they stand by the lakes and rushing rivers through the valleys of our land. In mystic file, through the aisle, they lift their heads sublime, these gray old pillar temples, these conquerors of time.” Uttered a poetic predecessor of Yeats, Denis McCarthy in 1846, exactly 82 years ago, a remarkably identical sentiment after being smitten by the peculiarly Irish mist which continues to flow in its woodland, vast lush plains and old castles. 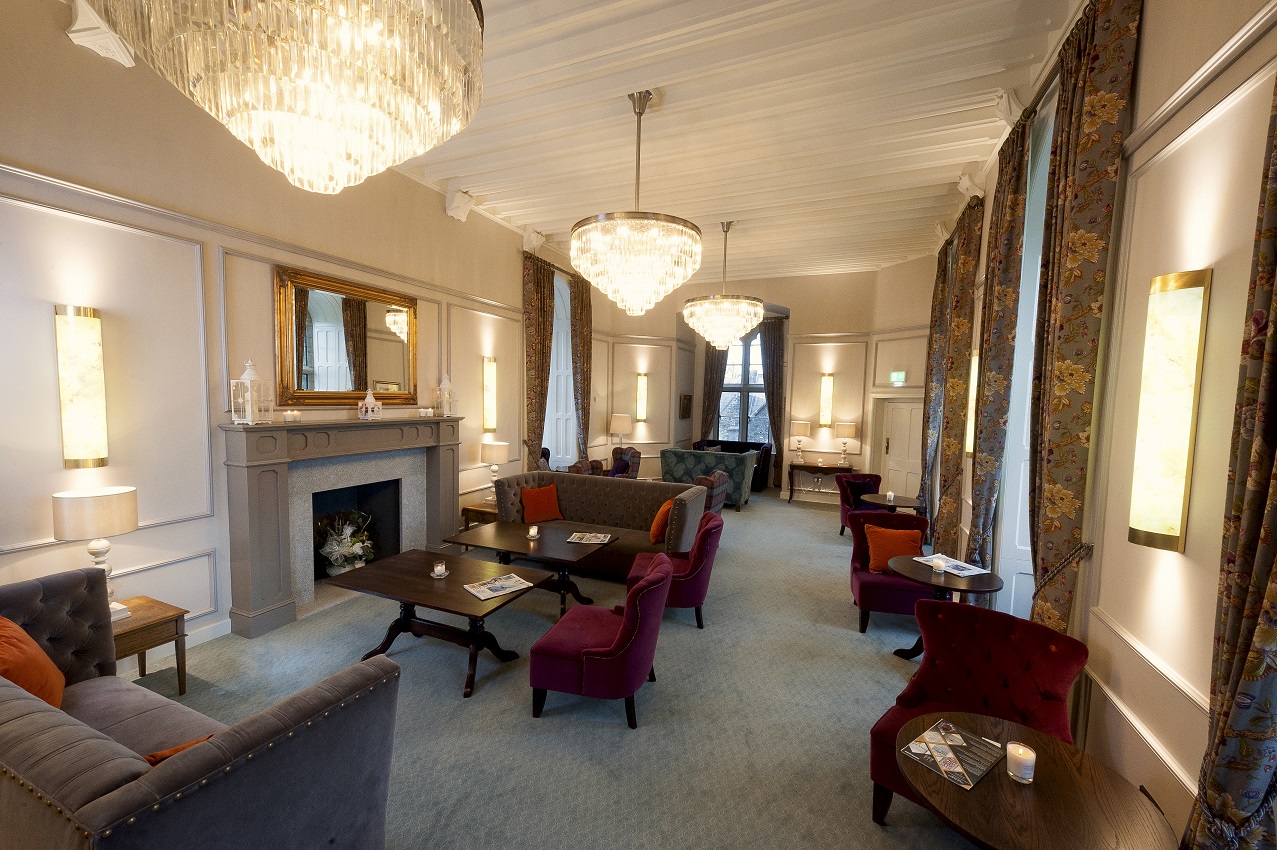 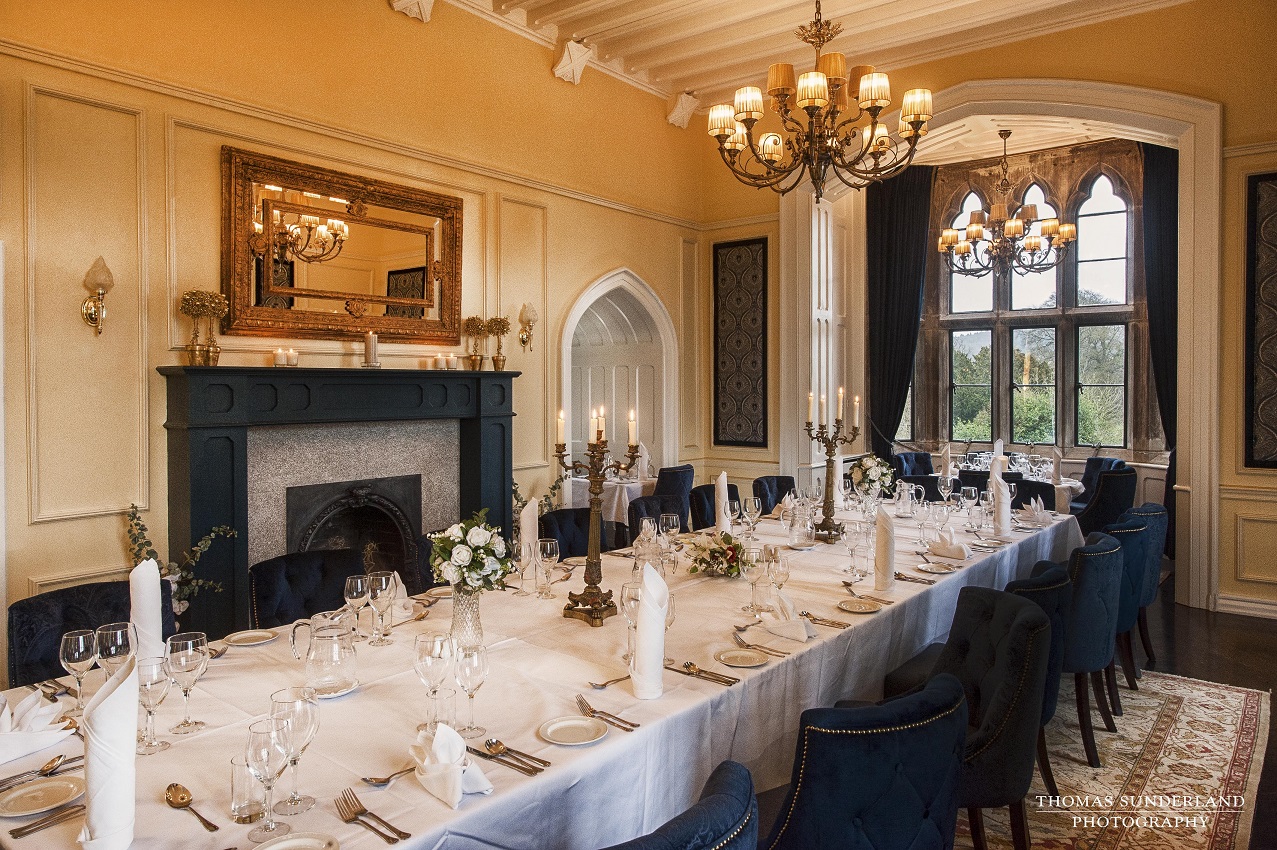 Jay Cashman, the owner of Kilkea Castle unveils his moment of finding love to the place, where he puts in, “For me, watching the transformation of this property over the years has been an amazing experience. Clearly, it was stunning the day we drove up to it before we even spent a dollar. What we did was attempt to bring it back and also add a modern flair to increase its accessibility. This continues to be challenging but phone creatively. I think that the things that make a visit to Kilkea indelible are an appreciation for the history, meeting the local people, tasting the locally grown food, and being able to feel fully immersed in a place so rich in culture and history.”

Listening to Jay, Christy Cashman, an actress, producer, philanthropist and an avid equestrian goes back in time to enchant her earthy memories from the Castle; she adds, “One of my favorite memories is spending our first Christmas in Kilkea. In spite of its size, it was very warm and cozy and placing the presents under the Christmas tree in the foyer felt surreal. I still pinch myself sometimes when I’m walking through the place. It just doesn’t seem real sometimes. I’m very grateful to be there. Riding around the area on my Connemara, Bobby, is my favorite past time. There are times when I look at certain views and think that it could be hundreds of years ago. I love that.” 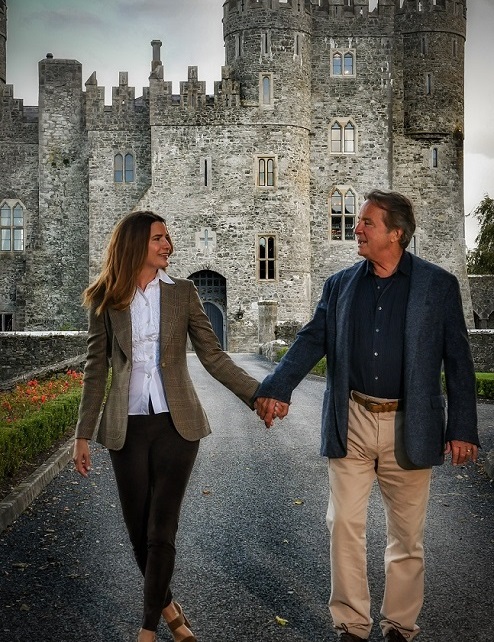 And the vision has had the history coming live. The Kilkea Castle is one of the most splendidly preserved and presently inhabited medieval Castles extant today that was established in 1182 amid the times when England had fallen under attack by the ferocious Normans who would shape much of the medieval history of both Ireland and England. Sir Walter de Riddlesford, an Anglo-Norman lord, who was granted in Ireland the baronies of Bray, County Wicklow and Kilkea, County Kildare between 1171 and 1176, established a “Motte-and-bailey” Castle characteristic of the formidable Norman military defence architecture. One of his Grand Daughters married the 3rd baron of Offaly, Maurice Fitzgerald, an alliance which would ensure that for next 700 years the Kilkea Castle remains in the fine custody of the Fitzgeralds.

A castle of this age and grandeur was sure to become one of the most relevant center of Irish cultural history. Sir Thomas de Rokeby, the Justiciar of Ireland, used the castle as his military base, and died here in 1356. With the onslaught of the fifteenth century, a new mystical chapter was underway when the property fell into the hands of Gerald, the 11th Earl of Kildare whose idiosyncratic indulgence in sorcery and magic earned him the sobriquet the "Wizard Earl". The legends had it that when magic could no longer supply the Wizard Earl with more life, he passed away in 1585 only to return to the castle after as an apparition every seventh year, mounted on a silver-shod white charger. The mystical charm of the Castle wouldn’t survive much longer after the wizard earl was gone and the lease of the Castle to the Jesuit Order by the widow of the 14th Earl of Kildare in fact marked the end of Castle’ mystical sojourn in Irish history with the culmination of the Confederation of Kilkenny which had in attendance the Archbishop Rinuccini, Papal Nuncio in 1649.

A new chapter started in the history of the Castle when the 19th Earl of Kildare chose the Charton House as the family seat of the lineage leaving the Kilkea Castle empty to be leased, not to any spiritual leader this time but to the business magnates who were more than happy to sit over the splendid property built in 180 acres of lush woodland, lavish rose-filled gardens, and a serene river, such a bountiful deal had been made. Kilkea castle had come out into a new world of which its present form is the most mature reflection, it was now in the most efficients hands, one of them was none other than the famous Dublin Silk Merchant Thomas Reynolds, a close friend of the Kildare family. 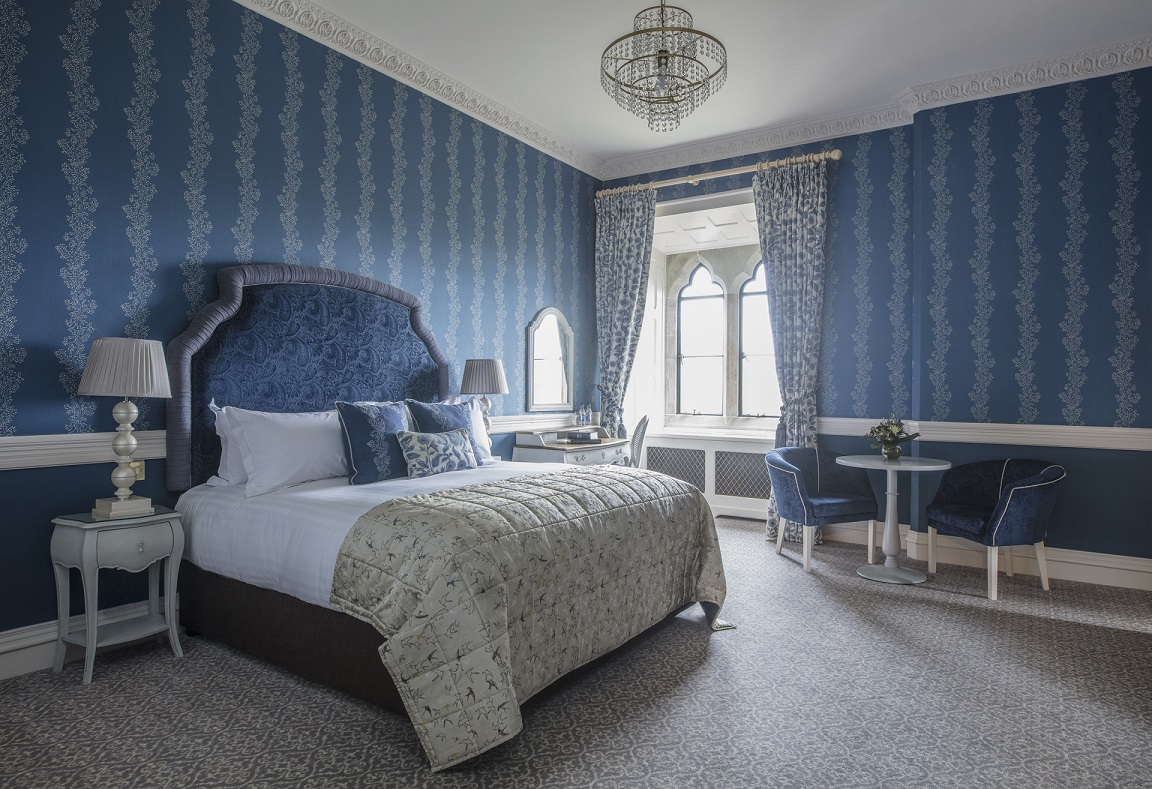 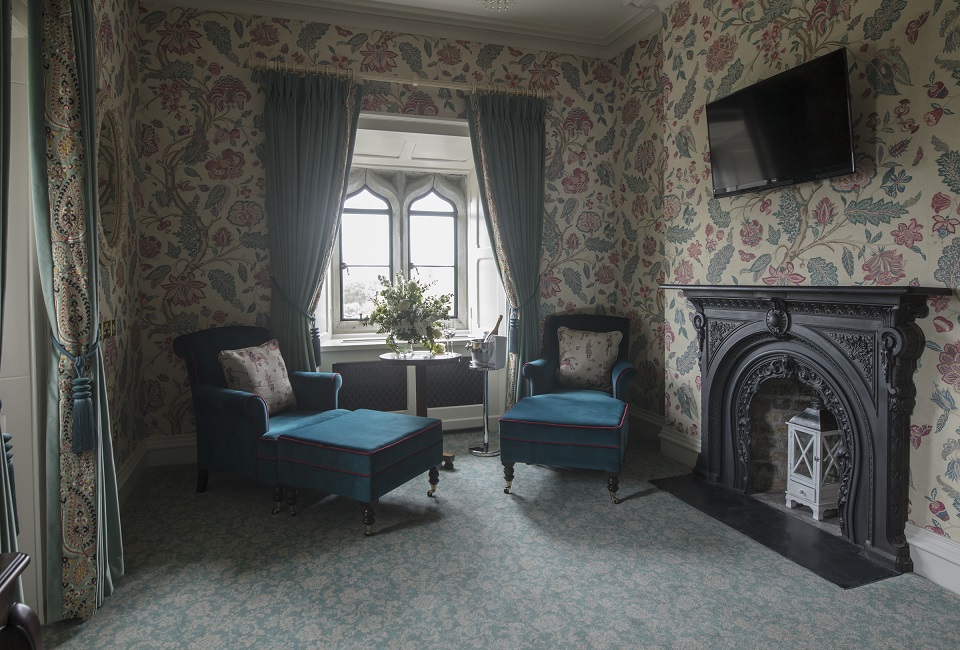 But a reversal of fate had been awaiting the Kilkea castle in future, in a series of almost dramatic effects the erstwhile seat of the lineage Charton house was sold in 1949, leaving the royal, traditional lineage with no anchor for their traditional glory, except the Kilkea Castle. So the 8th Duke of Leinster made no mistake and made it the seat of the family, once again the Kilkea was back to the royal blood.

Finally when Ireland plunged into an economic crisis, The Fitzgeralds too were by now compelled to sell the overwhelmingly Old castle and in 1960 it became the destiny of the traditional castle to be utilised as a luxury hotel providing a truly unmatched experience of luxury, tradition, history and Ireland’s mystical charm in one sumptuous platter. Another jolt to the economy and the castle entered into examinership in 2009, which had meant that another chapter was awaiting the Kilkea castle which would prove to be the most scintillating of all.

The Boston construction mogul Jay Cashman expressed a not so regular wish to his wife “ I want to buy a castle”, 30 millions euros, five months of uninterrupted renovation and the result was an absolutely stunning and overpowering blend of modern chic and medieval resplendence, Kilkea Castle had been bought. As soon as the deal was made, it could have been thought that the Castle will become a pastiche of American and Irish culture, but Jay Cashman found himself intuitively aligned to further this Irish glory. Cashman intuitive inclination hid a fascinating link to Irish Culture and society. Cashman undertook the service of a genealogist and voila! “We were Irish peasants here,” he said of his lineage. “We were working for the landlords. History could offer no more baffling cases of destiny. Who would have thought, a medieval Irish peasant’s lineage will surface to twist the history of Ireland’s one of the most iconic monument.”

The castle has quite some interesting attractions and entertainment means. Some of these are Tennis, Archery, Falconry, Skeet Shooting, Horseback Riding, Swimming, Tubing, Cycling, Fishing, Birdwatching, and Fox Hunting. The field of entertainment has Sightseeing, Shopping, Hiking, Live Music, Art Exhibits, and Theater Performances.

Things To Do When In Ireland 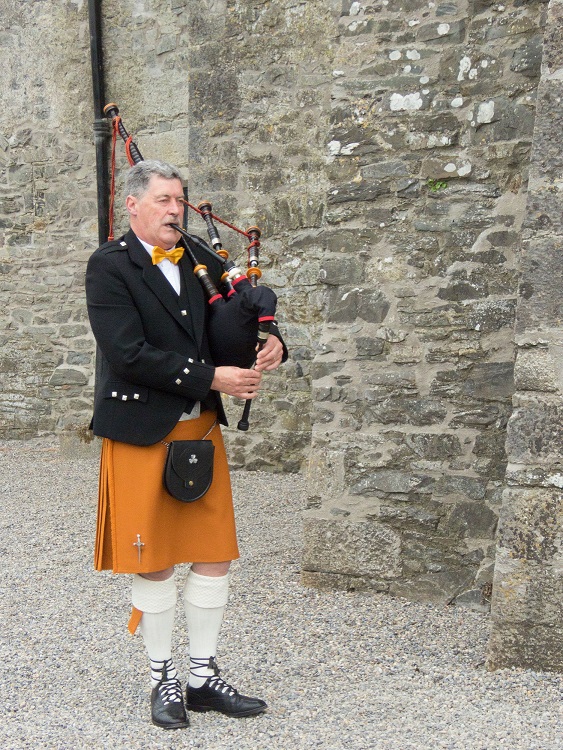 When In Kilkea Castle...

Kilkea Castle has a vivid love for equestrian life as Christy Cashman has a longing love towards the loyal horses. The castle gives way to, The Irish National Stud, The Curragh Racecourse, Naas Racecourse, Kildare Hunt. Apart from this there are countless racing stables and breeding farms, equestrian events and competitions. August, in fact, is the perfect time to catch up the Dublin Horse Show.

Also, Munny Trail, a close by attraction for equine adventure lovers, is an equestrian trail ride out across a farm situated on the borders of Co Carlow and Co Wicklow in a place called Coolkenno. Riders can bring their own horses and ride for approximately 2 hours across a marked trail with fences en-route. 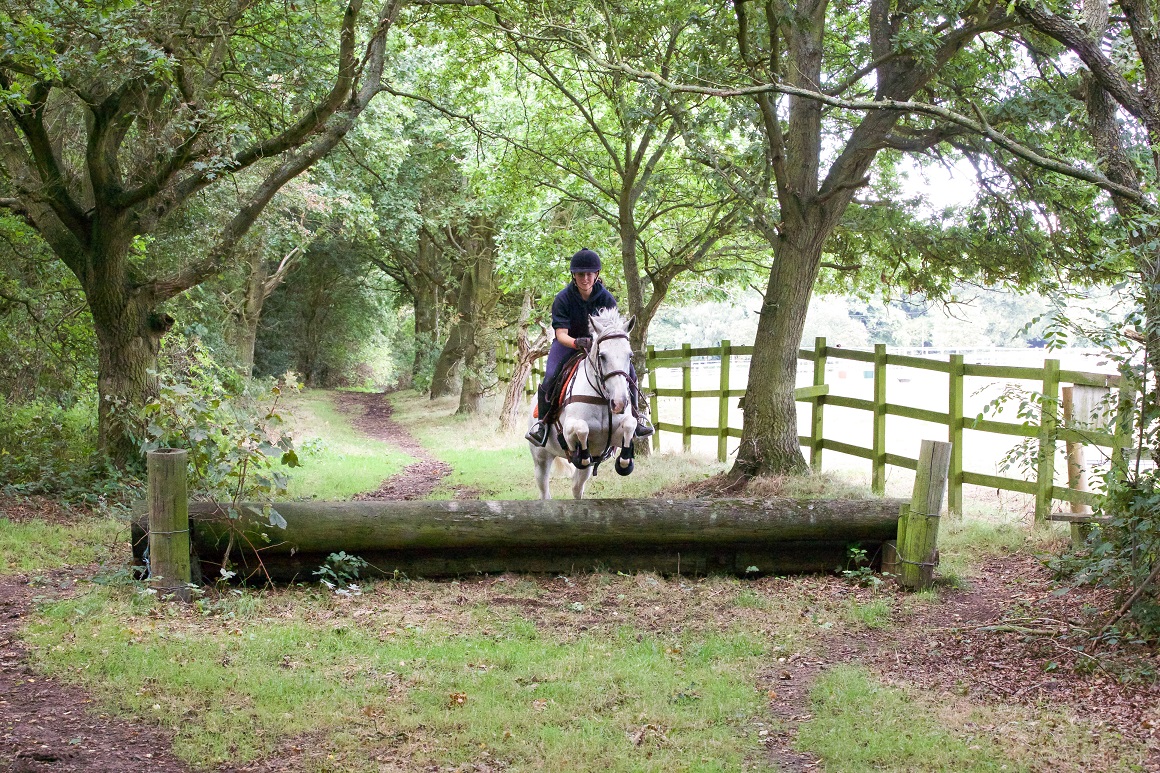 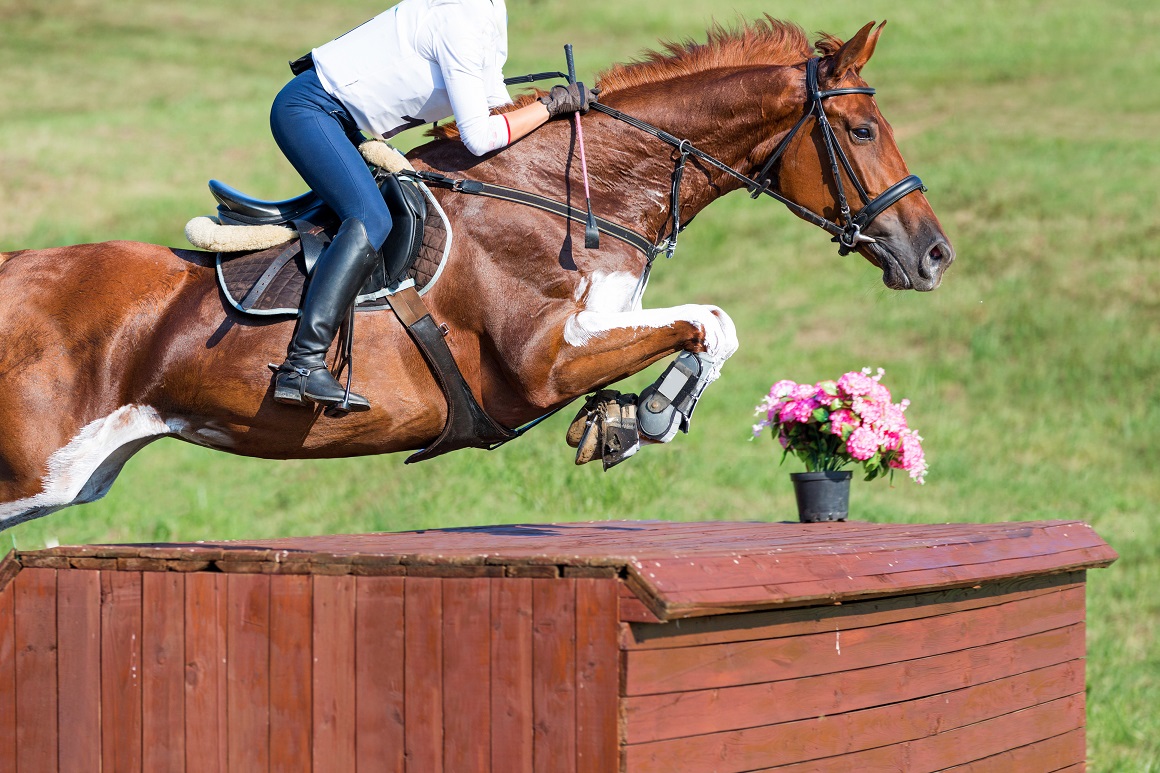 
1.VISUAL, Carlow : Ireland is eminent due to its dotting visions that are no less than a magic spell. Keeping the akin flavor of the country, ‘VISUAL’, an iconic art centre comes as one of Ireland’s leading contemporary art spaces.

2.Cathedral Of The Assumption, Carlow : The Carlow town dedicates a cathedral church of the Roman Catholic Diocese Of Kildare and Leighlin to the Assumption Of The Blessed Virgin Mary. Standing tall with a beautifully detailed 151 ft (46 m) spire that is one of the highest points in the town.

3.Fresh Eire Adventures, Hobart Town : If you dislike the concept ‘package tour’ for its like running on a mill, then here is for you this cycling through the streets experience that will give meaning to your holidays. Padraic Doorey, founder of Fresh Eire Adventures points that for him vacation is not an endurance test, instead is a relaxing way of getting to know the destination. And they do this with their unique outlook.