A Polo Pony is like a motorbike with a mind of its own weighing half a ton.


Polo, as we all know is a horseback mounted team sport. The mounts are called Polo ponies, although the term pony is purely traditional and the mount is actually a full sized horse. They are the most important factors in polo, as most players admit that their horse is responsible for 70%-80% of their game. The horse used for the game are not normal horses, but are selected carefully to cater the needs of the game. Quick bursts of speed, stamina, agility , manoeuvrability and intelligence are some of the features which makes a polo pony unique and fit for the game. Temperament is another important characteristic; the horse must remain responsive under pressure and not become difficult to control, therefore polo ponies must be calm, always alert and unfailingly obedient and sensitive to signals and commands from their riders. They are also competitive and try to prevent other horse from stealing the ball from them, which requires a lot of speed and agility to turn and stop quickly in order to follow the path of the ball. The training of a pony generally begins at the age of three and lasts from about six months to two years. Most horses reach full physical maturity at the age of five and are at their peak of athleticism and training at around age 6 or 7.

Jaipur is the spiritual home for polo, still continuing the tradition. Though many foreign breeds of ponies are used in the matches, the native breed – Marwari – is commonly seen galloping across the field, doing wonders for their masters.

The Marwari or Malani is a rare breed of horse from the Marwar (or Jodhpur) region of India. Known for its inward-turning ear tips, it comes in all equine colours, although piebald and skewbald patterns tend to be the most popular with buyers and breeders. It is known for its hardiness, and is quite similar to the Kathiawar, another Indian breed from the Kathiawar region southwest of Marwar. Many breed members exhibit a natural ambling gait. The Marwari horses are descended from native Indian ponies crossed with Arabian horses, possibly with some Mongolian influence.

The Rathores, traditional rulers of the Marwar region of western India, were the first to breed the Marwari. Beginning in the 12th century, they espoused strict breeding that promoted purity and hardiness. Used throughout history as a cavalry horse by the people of the Marwar region, the Marwari was noted for its loyalty and bravery in battle. The breed deteriorated in the 1930s, when poor management practices resulted in a reduction of the breeding stock, but today has regained some of its popularity. The Marwari is used for light draught and agricultural work, as well as riding and packing. In 1995, a breed society was formed for the Marwari horse in India. The exportation of Marwari horses was banned for decades, but between 2000 and 2006, a small number of exports were allowed. Since 2008, visas allowing temporary travel of Marwari horses outside India have been available in small numbers. Though they are rare they are becoming more popular outside of India due to their unique looks. 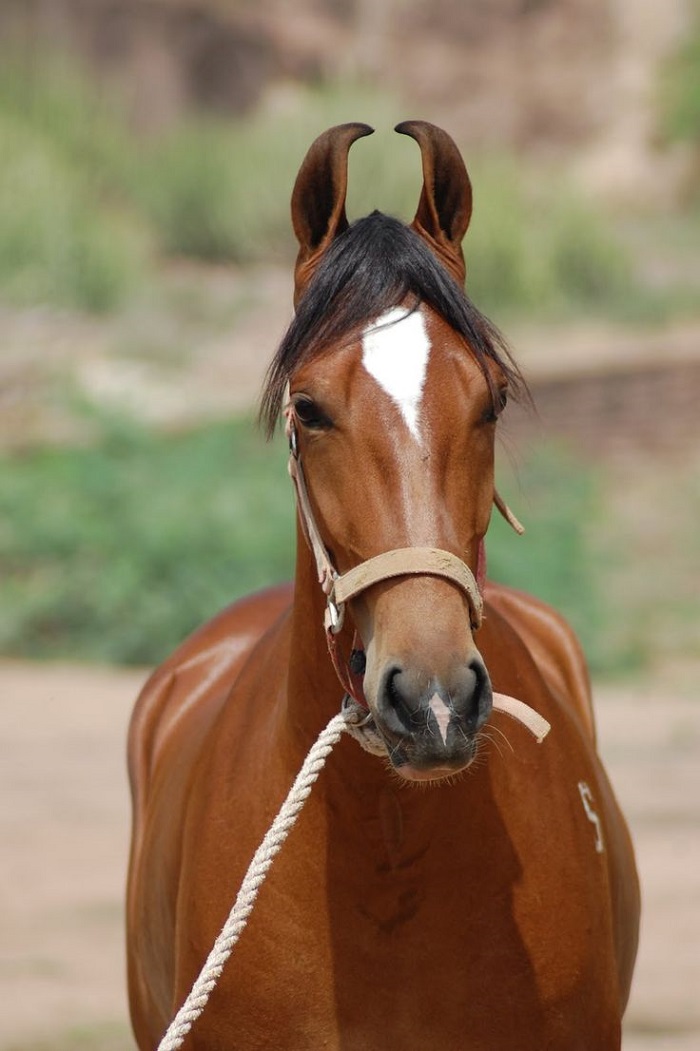 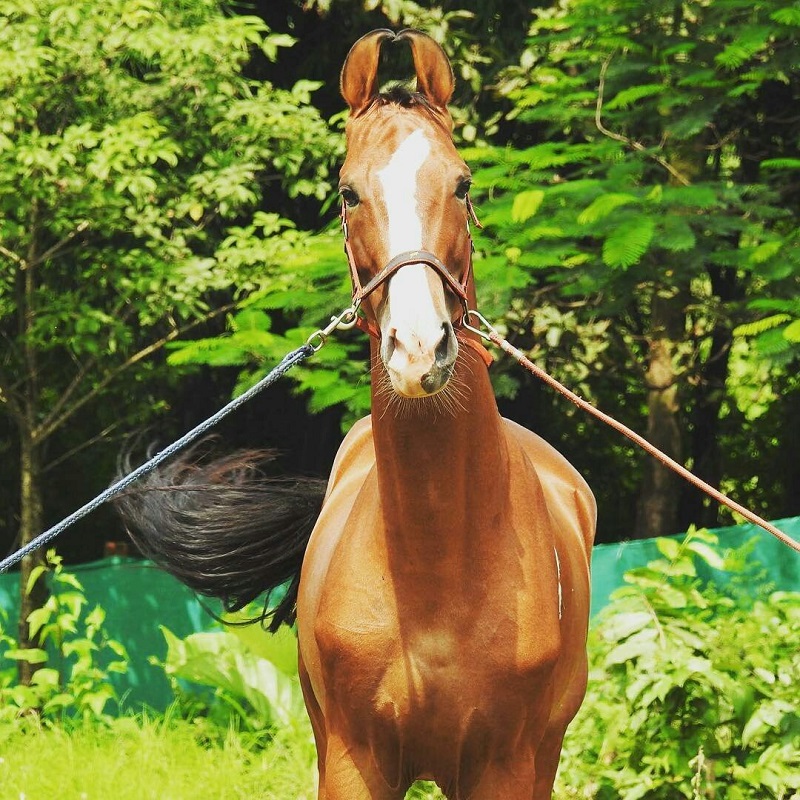 The Marwari is descended from native Indian ponies crossed with Arabian horses. The ponies were small and hardy, but with poor conformation; the influence of the Arabian blood improved the appearance without compromising the hardiness. Legend in India states that the Arabian ship, containing seven Arabian horses of good breeding, was shipwrecked off the shore of the Kachchh District. These horses were then taken to the Marwar district and used as foundation bloodstock for the Marwari.

The Rathores, rulers of Marwar and successful Rajput cavalry, were the traditional breeders of the Marwari. The Marwari was vital to their survival, and during the 12th century they followed strict selective breeding processes, keeping the finest stallions for the use of their subjects. During this time, the horses were considered divine beings, and at times they were only allowed to be ridden by members of the Rajput families and the Kshatriyas warrior caste. When the Mughals captured northern India in the early 16th century they brought Turkoman horses that were probably used to supplement the breeding of the Marwari. The breed was renowned during this period for their bravery and courage in battle, as well as their loyalty to their riders. The Rathores believed that the Marwari horse could only leave a battlefield under one of three conditions – victory, death, or carrying a wounded master to safety. The horses were trained to be extremely responsive in battlefield conditions, and were practised in complex riding maneuvers. Over 300 years later, during the First World War, Marwar lancers under Sir Pratap Singh assisted the British.

The period of the British Raj hastened the Marwari's downfall. The British occupiers preferred other breeds, and tried to eliminate the Marwari. During the 1930s the Marwari deteriorated, with breeding stock diminishing and becoming of poorer quality due to poor breeding practices. The breed was on the verge of extinction until the intervention of Maharaja Umaid Singhji in the first half of the 20th century saved the Marwari. His work was carried on by his grandson, Maharaja Gaj Singh II. A British horsewoman named Francesca Kelly founded a group called Marwari Bloodlines in 1995, with the goal of promoting and preserving the Marwari horse around the world.
The exportation of Marwari horses was banned for decades, but between 2000 and 2006, a small number of exports were allowed. Since 2008, visas allowing temporary travel of Marwari horses outside India have been available in small numbers. Though they are rare they are becoming more popular outside of India due to their unique looks. 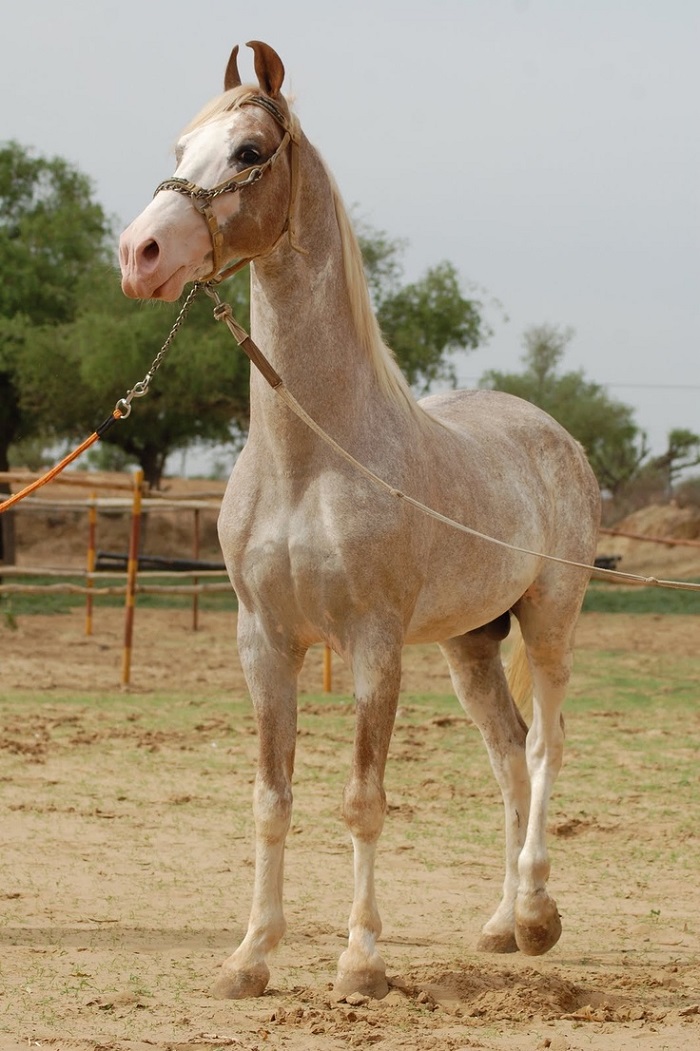 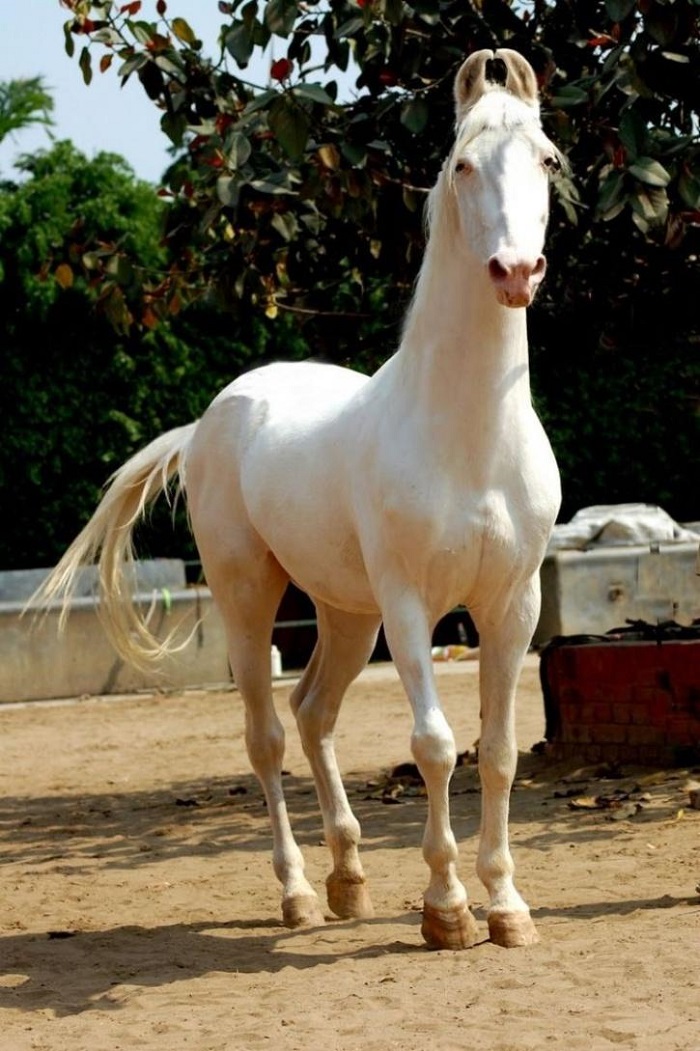 The Marwari horse averages between 14.2 and 15.2 hands (58 and 62 inches, 147 and 157 cm) high.
They can be bay, grey, chestnut, palomino, piebald, or skewbald. Although white horses are bred specifically for religious use in India, they are generally not accepted into Marwari stud books. Gray horses are considered auspicious and tend to be the most valuable, with piebald and skewbald horses the second-most favoured. Black horses are considered unlucky, as the colour is a symbol of death and darkness. Horses that have the white markings of a blaze and four white socks are considered lucky.
The facial profile is straight or slightly Roman, and the ears are medium-sized and curving inward so that the tips meet; also, the Marwari horse can rotate its ears 180º. The neck is arched and carried high, running into pronounced withers, with a deep chest and muscular, broad, and angular shoulders. Marwaris generally have a long back and sloping croup. The legs tend to be slender and the hooves small but well-formed. Members of the breed are hardy and easy keepers, but they can also be of tenacious and unpredictable temperaments.
The Marwari horse often exhibits a natural ambling gait, close to a pace, called the revaal, aphcal, or rehwal. Hair whorls and their placement are important to breeders of Marwaris. Horses with long whorls down the neck are called devman and considered lucky, while horses with whorls below their eyes are called anusudhal and are unpopular with buyers. Whorls on the fetlocks are thought to bring victory. The horses are expected to have correct proportions, based on the width of a finger, said to be the equal of five grains of barley. For example, the length of the face should be between 28 and 40 fingers, and the length from the poll to the dock should be four times the length of the face. Daily Routine –
Horses usually wake up by 5 or 6 am with an appetite. Feed is very important to horses since nature designed them to spend much of their day grazing, chewing, swallowing and digesting their feed. The first feed is given in the morning itself which can be grains, hay or pasture grass, also a proper water supply is ensured to keep the horses hydrated. The breakfast is followed by a bathing or massage session on alternate days. The next daily task involves making sure that the horse gets to do the exercise. This can be riding, walking or racing but of sufficient duration and intensity to give the horse a good work out. Without sufficient exercise horses tend to store pent-up energy and become less manageable as time goes on. Some horses turn to stereotypies such as stall walking when they don't have sufficient exercise.
During the Polo seasons, the horses are then prepared to play the match and taken to the fields. After the matches are over they relax themselves by playing in mud.
Most horse nutritionists recommend splitting the horse's feed into at least two or more feedings each day, usually first thing in the morning and then again in the late afternoon or early evening depending on the schedule. Hence they are fed around two times a day. The evening feed again consists of grains, pasture grass, hay or other salts and minerals required by their body along with a good supply of water.