The battle for the RPC Cup continues as six teams come into play on the second day of the tournament. 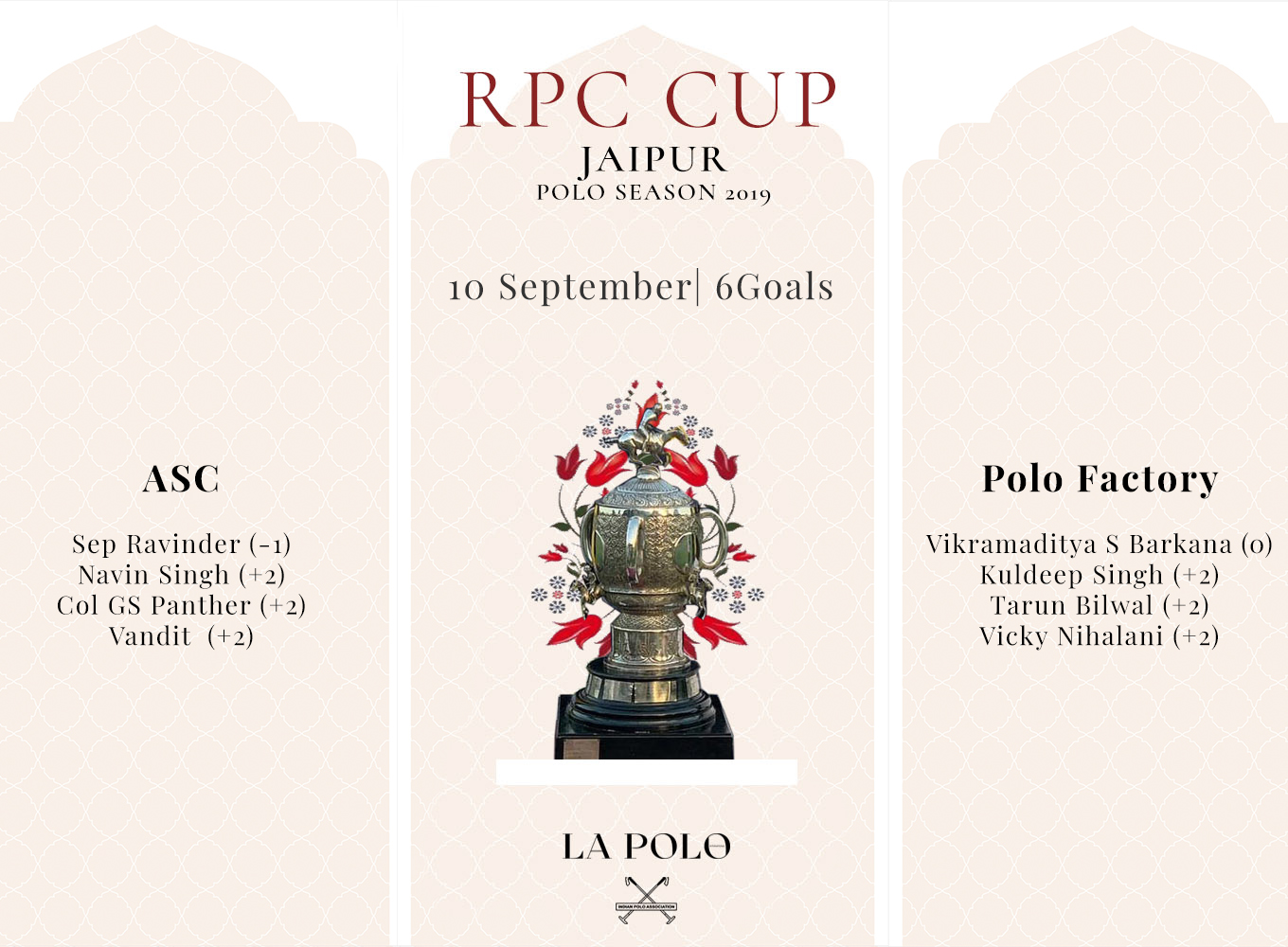 Asc gets an advantage of 0.5 points before the start of the game
The first chukker is into action, a minute already passed. After a strong defence, a delightful shot by Vandit followed by a goal in favour of his team.
It is a taut competition between both the teams; Vicky Nihalani passes the ball to Tarun Bilwal, before the ball could roll towards the goal we have the umpires' whistle. Kuldeep Singh is preparing to hit the ball giving it a hard strike making the ball roll out of the line. And we have a goal by Tarun Bilwal, opening an account for the Polo Factory, bringing an end to the first chukker. The scores for the first chukker are-

The second chukker is ready to begin and we can see the players preparing themselves and their ponies for rest of the match.
The chukker is now on, ball is rolling across the ground, Tarun taking it over passing it to Vicky who gives it a good long shot. 2.39 secs for the second chukker are already gone, with no change on the scoreboard.
Its half time for the chukker, players can be seen changing the ponies. It's a beautiful view in the Rajasthan Polo Club, an interesting evening witnessing the third match for season 2019. Vandit led the ball to the goal post but unfortunately with no success.
We can see Kuldeep struggling towards the goal and it's a success, bringing him a goal.
And we have the hooter for the second chukker.


The game is into the third chukker now. Ravinder gives a tough fight to Barkana. Moving towards the goal Navin Sing takes it over and gets a goal! The scoreboard is now indicating 2 goals in favour of Polo Factory and 2.5 in favour of ASC. Umpire Daniel Otamendi is preparing to roll the ball after we had the umpires' whistle. The ball is now rolling between the mallets, Ravinder gives it a great shot towards the goal but in vain.
We are in half time for the third chukker , 45 secs. for the break.
The game is into action once again Navin Singh gives it a long hit and it's a beautiful goal by him.
We have another goal for the chukker by Kuldeep.
A great partnership between Ravinder and Navin but before they could get success , we have the umpires' whistle.
Navin Singh has the goal again, getting him a hat-trick. With that we come to an end of the third chukker. 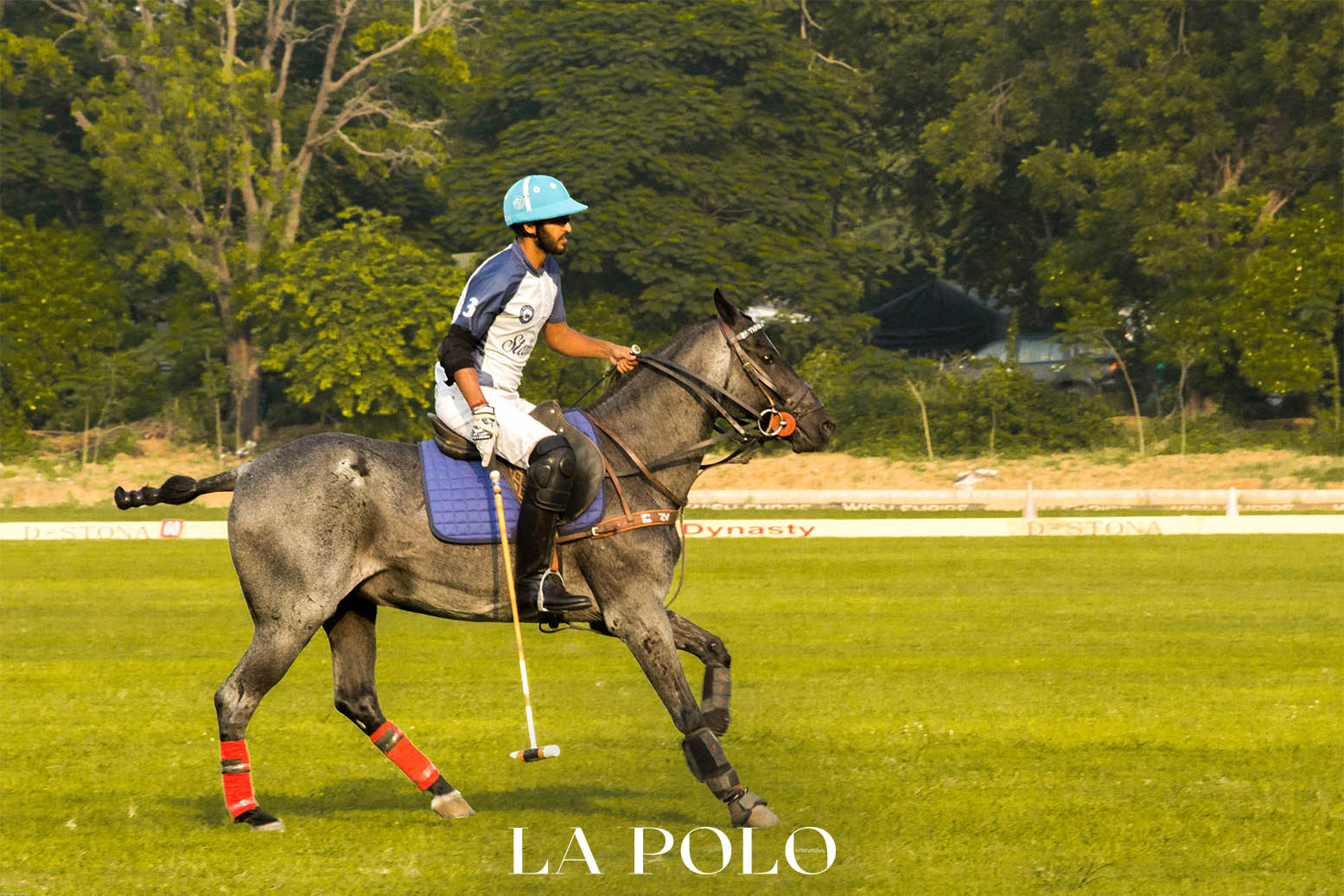 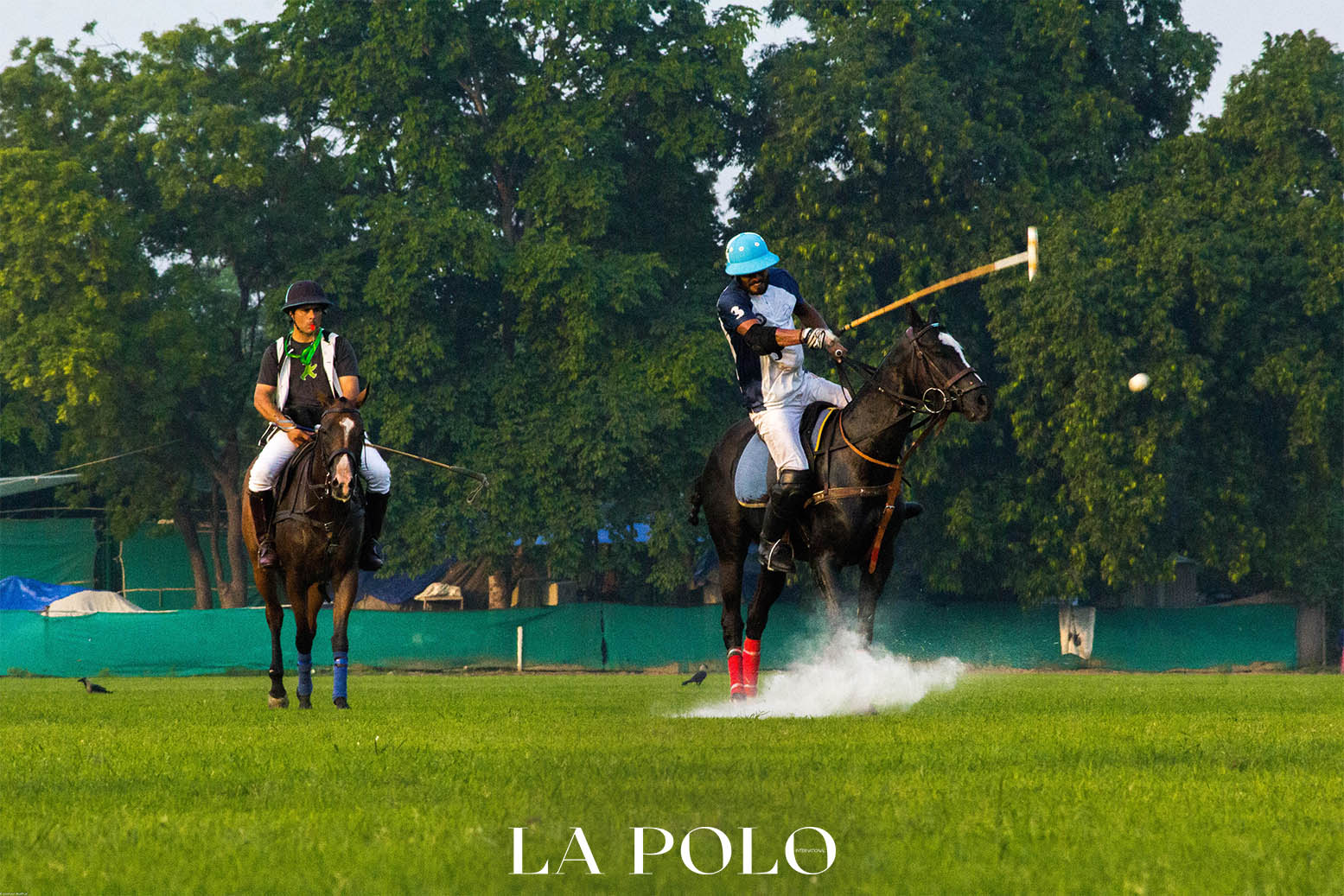 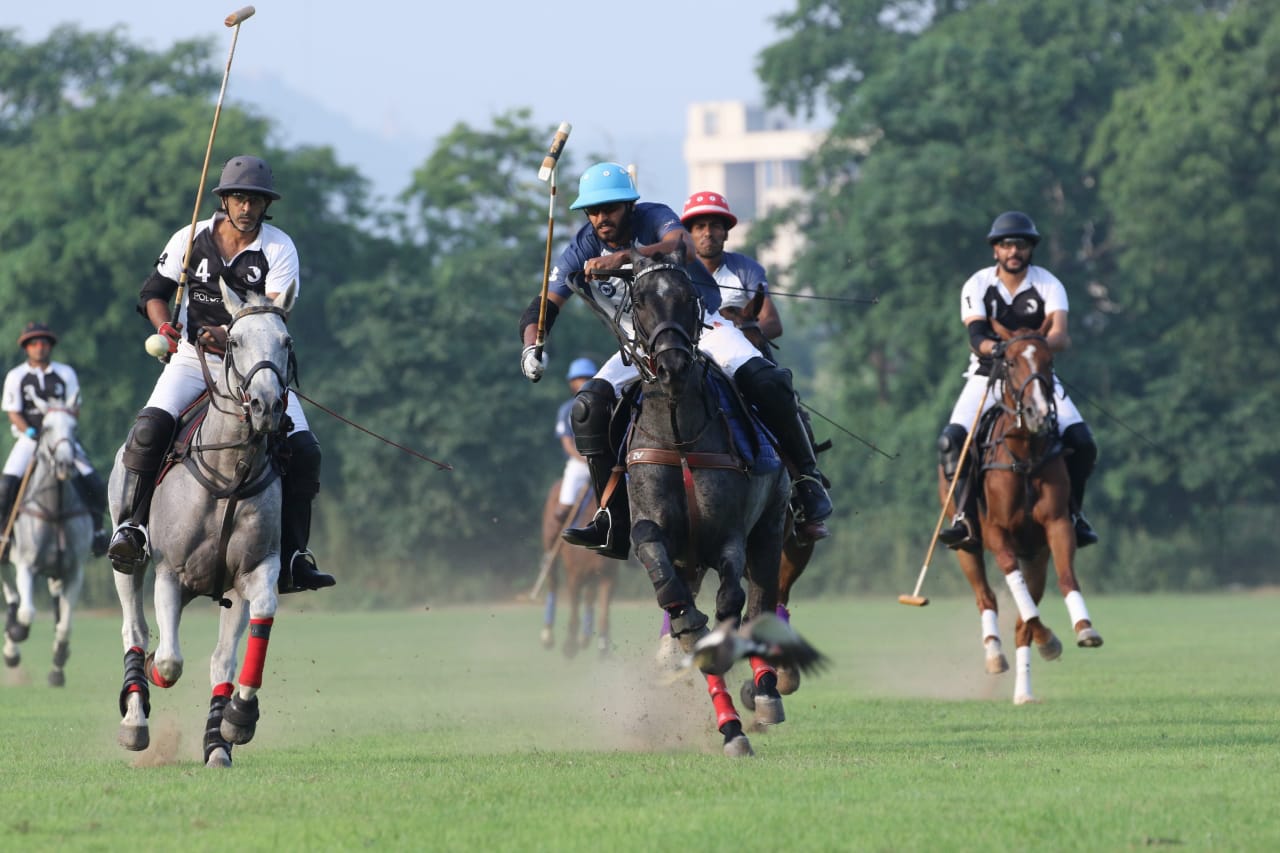 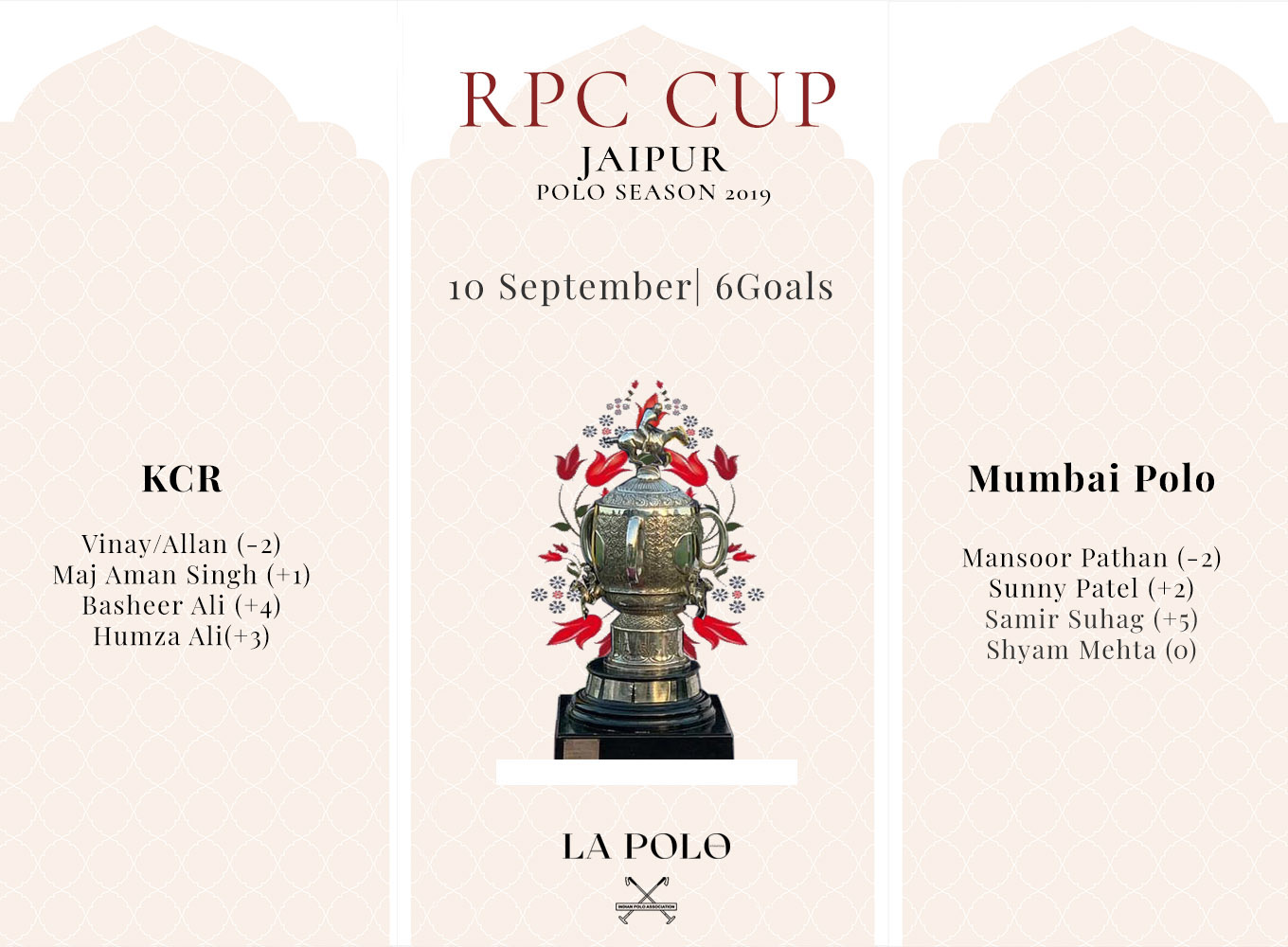 For the match, Allan will play the first two chukkers and Vinay will be playing the last two chukkers for the KCR.
Mumbai Polo is given an advantage of 0.5 points before the start of the game.
Gerardo Mazzini and Sakim Azmi are the umpires for today.

Mazzini rolled the ball and the match has started at 3.40 on the clock.
A Taut competition between Basheer Ali and Sunny Patel ; and Basheer gets the goal, opening the account for the team by 1 goal. Humza Ali drags it hard passing it on to Basheer Ali who hits it hard.
It's half time the chukker. Sunny Patel takes the ball with a lovely strike. We can see Aman Singh taking it to the goal, but the shot missed with a painful sigh from the audience.
A sunny day with heat all around but the players, ponies and audience are energetic praying for their favourite teams to win.
And we have Humza Ali taking it to the goal with a successful hit bringing another goal for the team. This brings the first chukker to an end.

The second chukker is now into action. Basheer Ali taking it forward snatched away by Shyam Mehta with an unsuccessful hit towards the goal.
The unsuccessful attempt is compensated by Samir Suhag who effortlessly made it to the goal.
Accepting a great challenge by the defenders Basheer Ali hits it through the goal.
And we have another beautiful shot by Basheer Ali hitting it to the goal. The scoreboard is in favour of KCR; 4- 1.5 The battle is on delight for all the polo fans and spectators.
Great teamwork by Mumbai polo. Mansoor Pathan drags it hard and passes it on to Sunny Patel, who gets a goal for the team.
It's half the chukker; 45 seconds for the break.
With a 4, there is no change on the scoreboard for KCR, till now.
4.45 mins gone for the second chukker; the scoreboard was stable until Basheer Ali got the goal getting a hattrick for himself for the match .
It's the end of the second chukker.

For chukker 3 , Allan has been replaced by Vinay for KCR to, showcase his skills, and an opportunity to get the game in their favour. We have a beautiful shot by Samir, after a booming strike, its a goal for Mumbai Polo.
And it is another goal by Basheer Ali. The game is becoming more and more interesting and competitive, it is a nail-biting competition which is forging ahead brilliantly. Wow! Another goal by Samir Suhag, a graceful shot!
Half time again, people waiting eagerly for 45 secs. To pass by.
With a lovely strike, we have Basheer Ali again getting a goal. He is no doubt, ruling the game today!
And the game is in its full pace, Basheer Ali hitting the ball hard passing to Humza Ali and we have the umpire's whistle.
Samir suhag gives it a long shot, sunny Patel takes the ball forward; and its a goal, the first goal by Sunny Patel for the season.
A great shot by Samir Suhag from the center of the ground. Its Basheer ali taking it away, 10 secs away from the end of the chukker; and we have another goal by Basheer Ali!
It brings the third chukker to an end

Umpires changing the balls for the fourth and final chukker.
The scoreboard indicating 9- 5.5; Basheer Ali with double hat-tricks in his name.
The match is on for its final phase.
It's Basheer Ali leading the way followed by Sunny Patel.
The match is marching towards its end and we have half time for the fourth chukker, the scores were stable until Samir suhag hit the ball through the goal. The ball is again in the hands of Basheer, Humza Ali taking towards the goal, but unsuccessful.
Immediately after, we have Basheer Ali compensating by getting the goal! Bringing the fourth and final chukker to a beautiful end.
KCR emerges victorious for the second match of September polo season ! 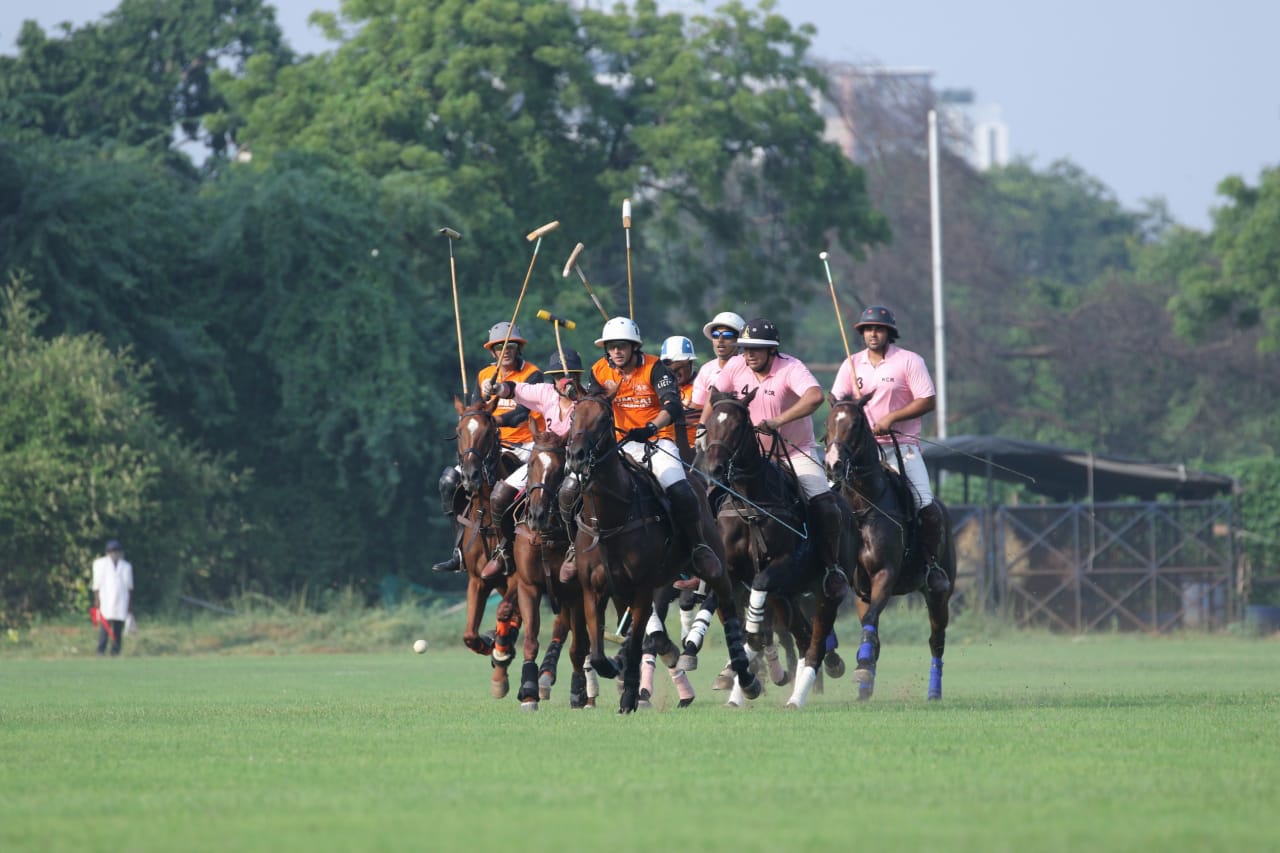 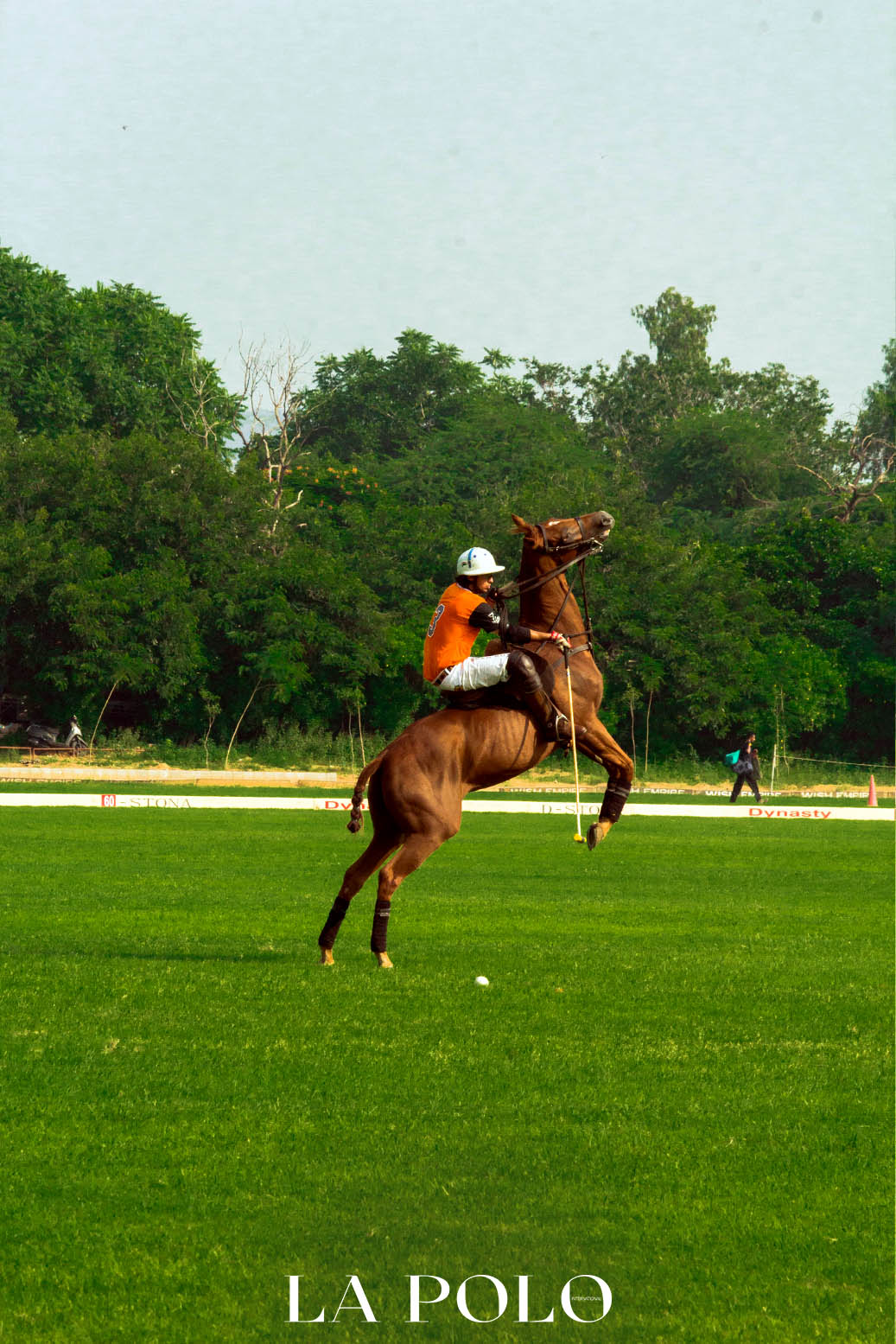 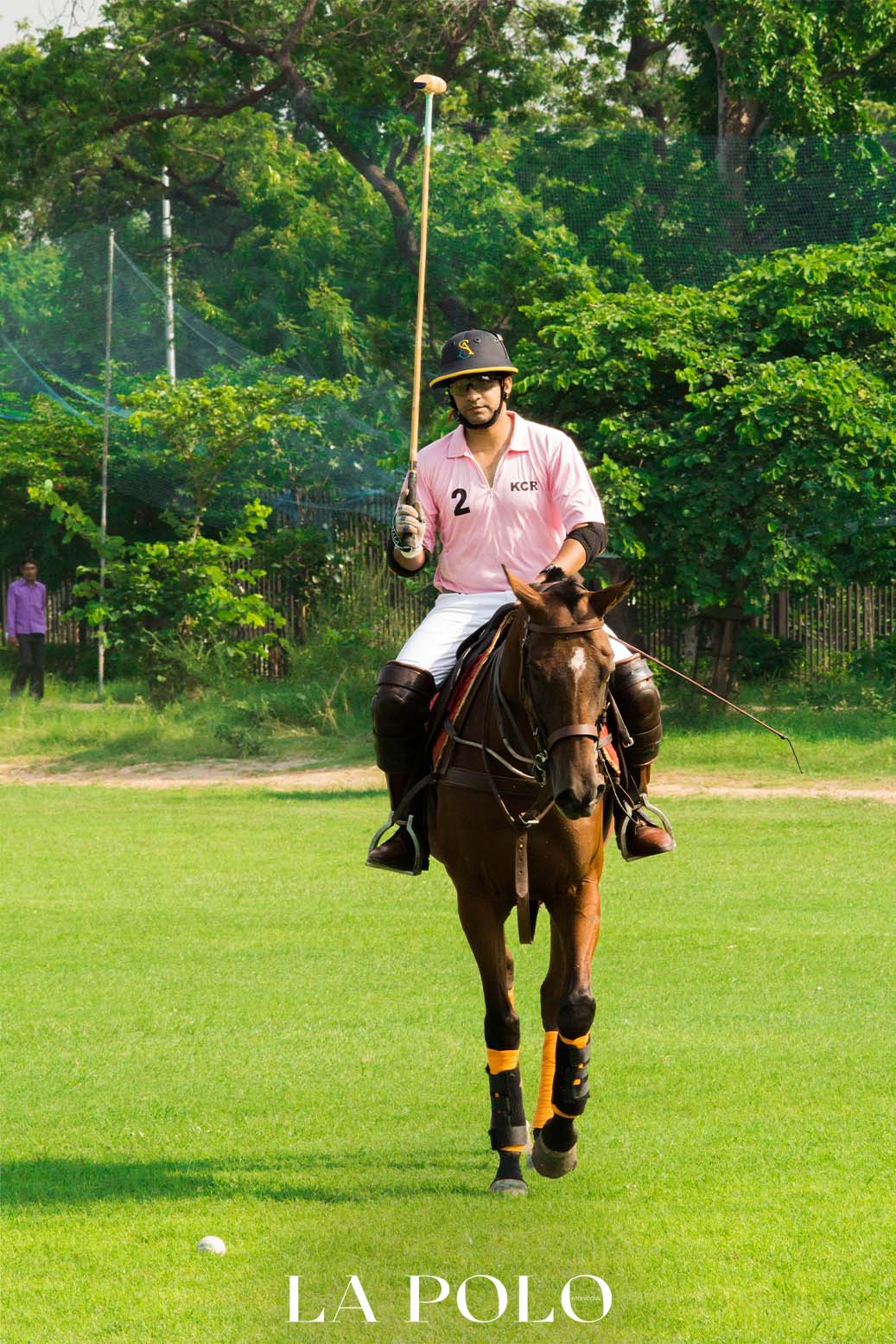 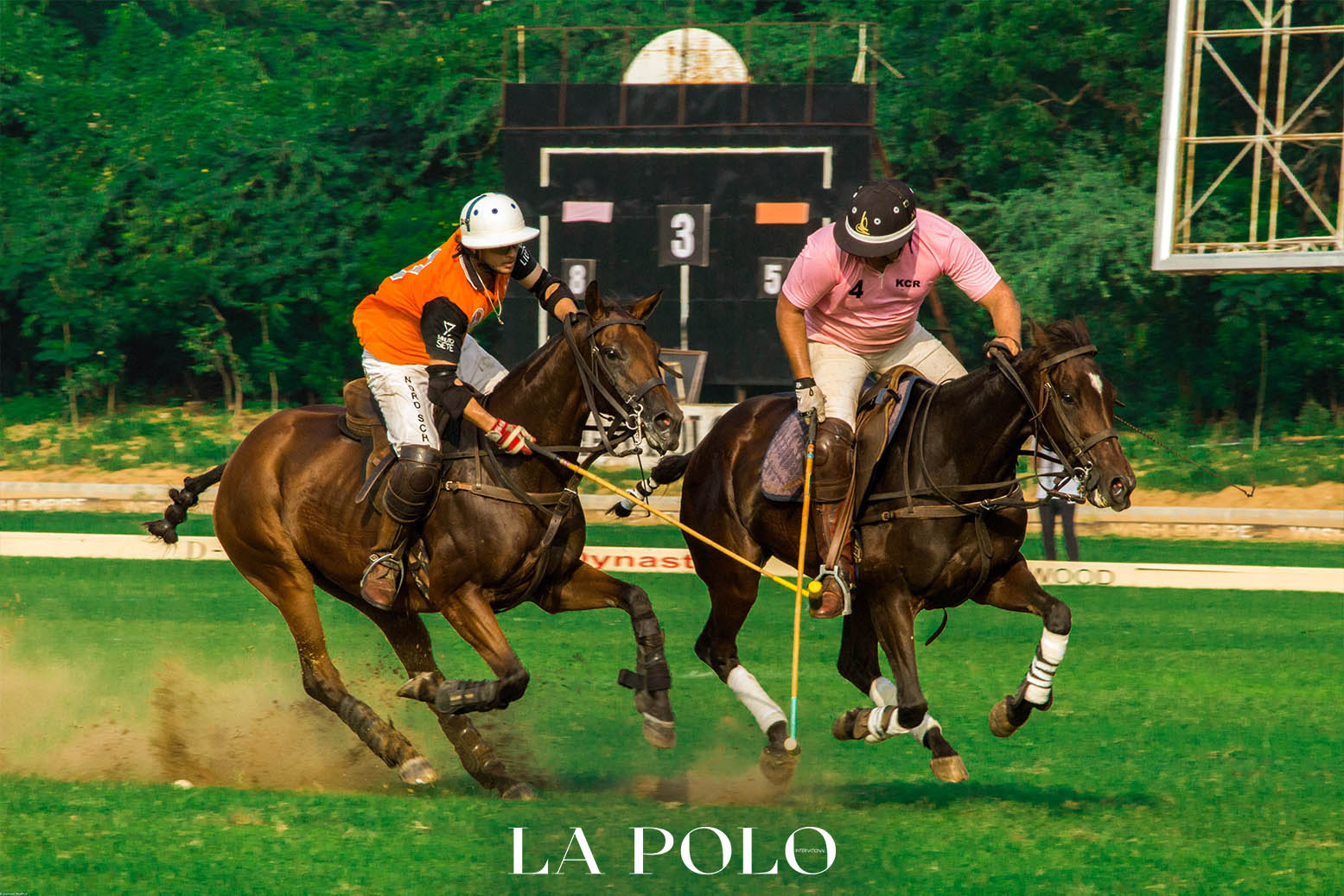 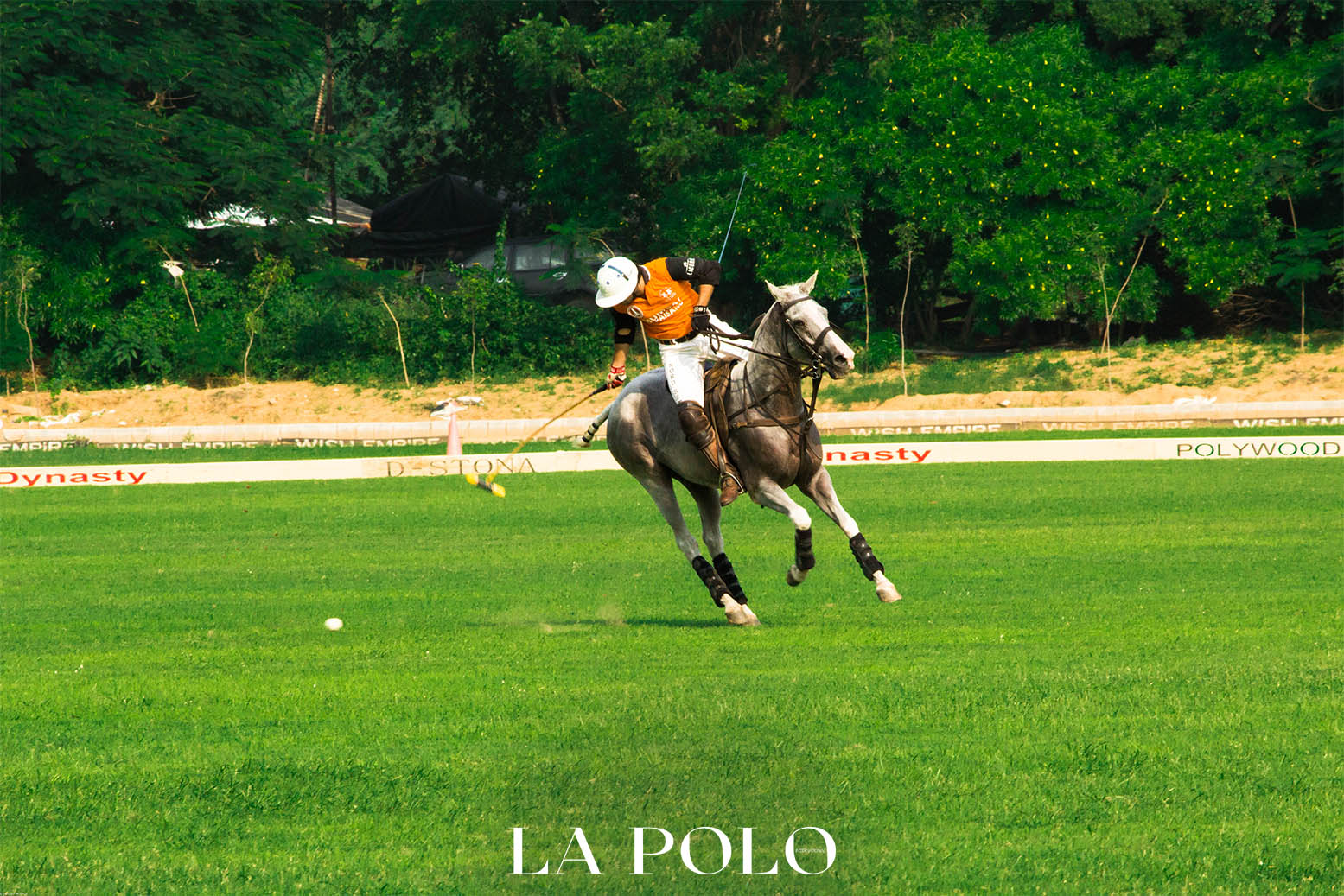