Pressure is a name of final and often we see players got scared by those. But those who scare their pressure, makes way to their glory encloses them towards their dream gate ending.


The day opened with frilled winds and a cloudy sky. Brighter as a light, the ground was reflecting a mirage image of passion and love for the sports. Its entities such as horses swinging like freedom has established again like long way back when India got its independence. The crowd is like partition between the hometown team and the away team. Match at his best swinging tight and tough and that’s how a battle for final are fought. Rajputana & Central India Cup, the end day of the 10th goal tournament of the 19th Jodhpur Polo Season witness 2 teams contesting for the final to hold the trophy with pride and that’s how the match emerges for overwhelming Jodhpur Season.

Jodhpur V/S SAHARA WARRIORS
The final match of the 10- goal cup of the 19th Jodhpur season, was in between Jodhpur ‘the hometown team’ and Sahara Warriors. Both teams are capable of up siding things and matter around their classiness of polo and passion for the sports.


The first chukker starts with Jodhpur, being the hometown team, Provided with half point by the officials of the Game. The match started with Simran Singh Shergil in control of Sahara Warriors. Out of a sudden in the 1st chukker beginning, 5b is awarded to Jodhpur which Angad kalaal beautifully assisted to his player the ball but Simran Singh Shergil, a matured player, using its defensive duties to strike that ball out of danger. In a moment, Angad kalaan like a flash taking the ball from the half, dribbling 2 players from the other team towards their goal post but with bad faith, he missed an open goal. Is this the pressures of final for Angad? As a whistle blows again by the umpire Manolo, 60-yard penalty awarded to Jodhpur and Angad kalaan like a warrior strikes it well but again Simran Singh shergil, amazingly defending and showing his class for the game. Simran Singh shergil, Sahara warriors, is playing fantastically in the final 1st chukker. In some time, Angad with confidence using its defensive duties to get the ball pout of the danger. Out of a sudden, whistle blows and 60-yard penalty awarded to Sahara Warriors but Simran Singh shergil who stood for the penalty, unfortunately he missed. Pressure for Simran Singh sherghil. Again, Simran Singh shergil favoured a penalty for his team but again as the pressure rises, he misses. The first chukker ends with results Jodhpur- .5 to Sahara warriors. Both the teams are competing for finals and the game is Idiosyncrasy in its own way. 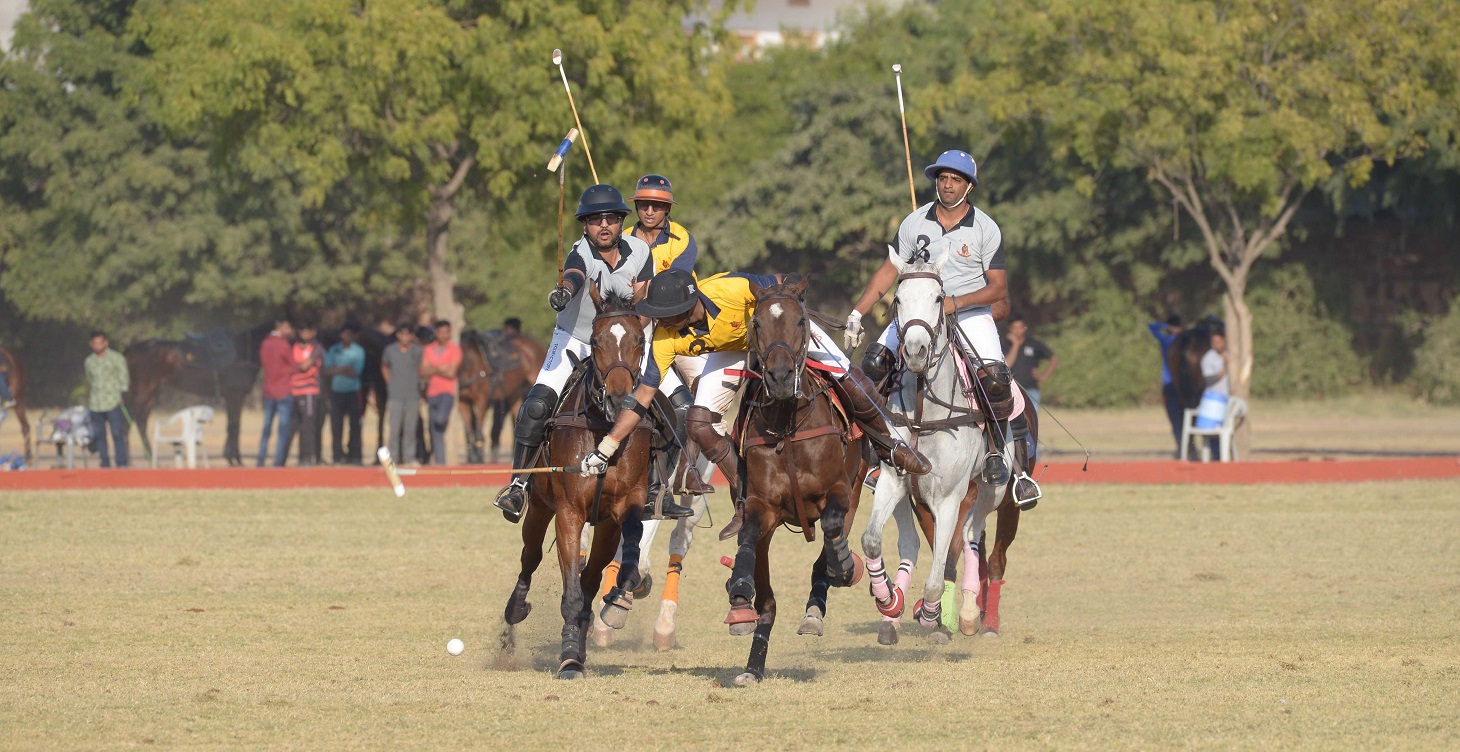 The 2nd chukker underway and Jodhpur got a foul. Janmejaj taking the ball to score the goal but again like a hero, Simran Singh shergil showing his defensive capability and again saves his team by the goal. Out of a sudden, Jodhpur is provided with the foul and Penalty is favoured to the Jodhpur team. Angad kalaan as a warrior again standing towards the penalty and with no pressure scoring it hard and high over the defenders and through the goal. So, Jodhpur scoring the first goal and goal is scored in the 2nd chukker. The result is now Jodhpur-1.5 to and Sahara Warriors nil/0. Out of a sudden, Jodhpur providing the gift for Christmas day to Sahara Warrior, Favouring them with a penalty. Siddhant with ease and motivation to win the finals of the Rajputana and central India cup held at Jodhpur MGSF ground, scores a beautiful penalty for Sahara Warriors and taking the score as Sahara Warriors-1 and Jodhpur- 1.5. Now, a foul is committed again by Jodhpur and 5b is awarded to Sahara warrior and Simran Singh shergil who have a score a goal from that position hitting the 5B beautifully but Angad kalaan beautifully Defending it with his stick. Pranav out of nowhere scores a fantastic goal for Sahara Warriors and Angad kalaan injuring himself in the same wavelength of time but Angad is fit and fine and back with same motivations to win the match. With a nick of time, Siddhant showing his defensive efforts for the team. Hereby, the 2nd chukker ends with result Sahara Warriors- 2 and Jodhpur-1.5.

The 3rd chukker undergoes and both the teams are looking sharp and naive. In the beginning of the chukker, Simran Singh shergil in control. Basheer scoring for Jodhpur out of nowhere and the crowd got amazed by his strike. Basheer’s daughter motivating his father by quoting come-on Papa. The result is now, Jodhpur in lead- 2.5 and Sahara Warrior- 2. Ina moment, 60-yard penalty is awarded to the blues i.e. Sahara Warriors and Simran Singh shergil looking up for the goal and he scores like a boss like high and high and over the defenders. The score is Sahara Warriors in lead – 3 and the hometown team, Jodhpur- 2.5. The game is going end to end and crowd is looking it’s with pride. Out of a sudden, Angad faking his shot and then hitting it beautifully by assisting Janmejaj who looks up to the opponent goal and dribbles through in. Jodhpur in lead again and the score is 3.5 to Jodhpur and 3 to Sahara warriors. Hereby, the third chukker ends with Sahara Warrior- 3 and Jodhpur in lead- 3.5. 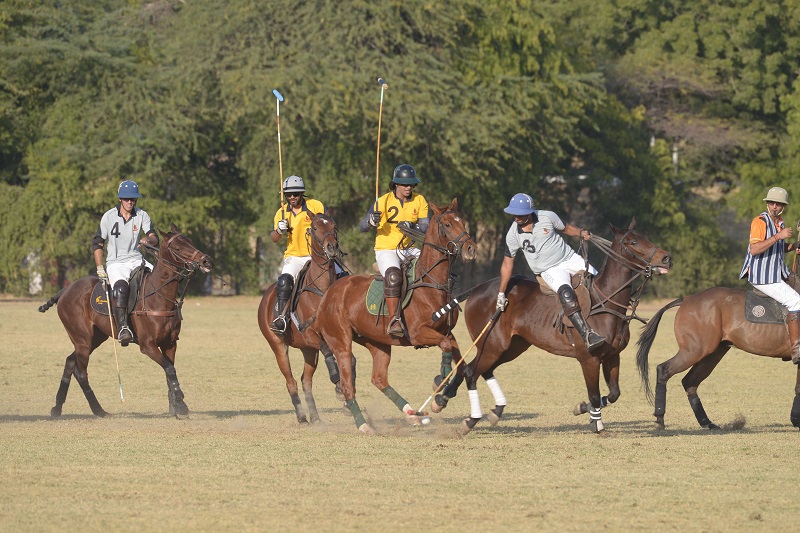 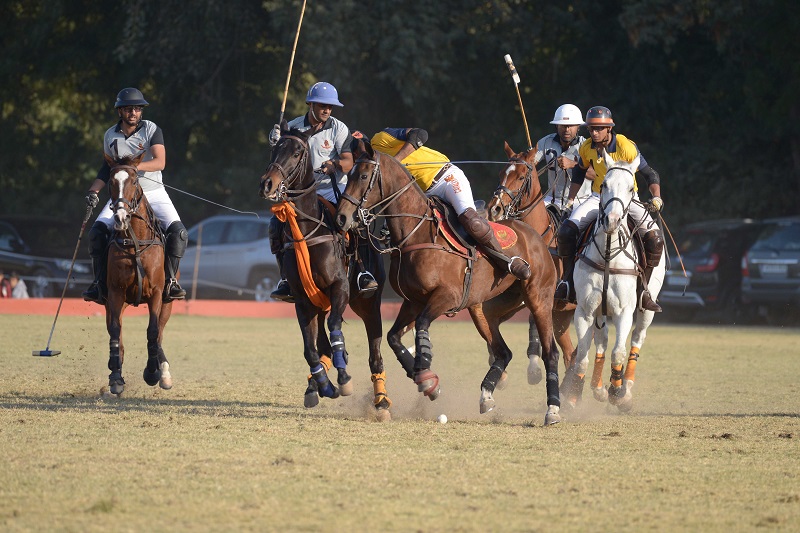 Congratulating Jodhpur for amazing win in the final and winning the Rajputana and central India cup.

LET THE PARTY BEGINS FOR Jodhpur. ALL HAIL TO ANGAD KALAAL AND HIS TEAM PERFORMANCE. CLAPPING CLAPPPING IT IS.