What all happened at the Milan Men’s Fashion Week?


Milan, a city host to all the favourite luxury brands commonly sees citizens on the streets dressed in Prada from head to toe. Therefore, it is always the zenith of expectations for the fashionistas waiting year-round for the fashion week. The Milan Men’s Fashion Week for the SS 2020 collection, which took place from the 14th to the 17th of June once again manifested at its best bringing forth a range of brands, each showcasing its best innovations gliding through their inspirations. This year not unlike the previous years, the Milanese scene from Men’s Fashion Week was a conglomeration of wearables and accessories for men.

While we find the fashion labels come to a step forward every year with innovations promising uniqueness and experimentation with colour palettes, there were collections by labels we cannot just stop thinking about. To recreate the moments of exhilaration that the Milan Men’s Fashion Week established this year, let us look at some of the highlights.

Dsquared2 put together a fast-paced show with a fire-red light matching the show pace. The setting was not just emitting a Chinese inspiration, but also a combative attitude, which was aptly described in the press notes’ headline- #RED2 Warriors In A Summer Garden. The brand sported an identical t-shirt printed with an image of the most influential martial artist of all time, worn with the same chinos with printed satin boxers, a look that was replicated throughout the co-ed show. With a strong inclination to being unpredictable, they highlighted Asian iconography bridging the gap between the 70s and 80s in the East and the West. 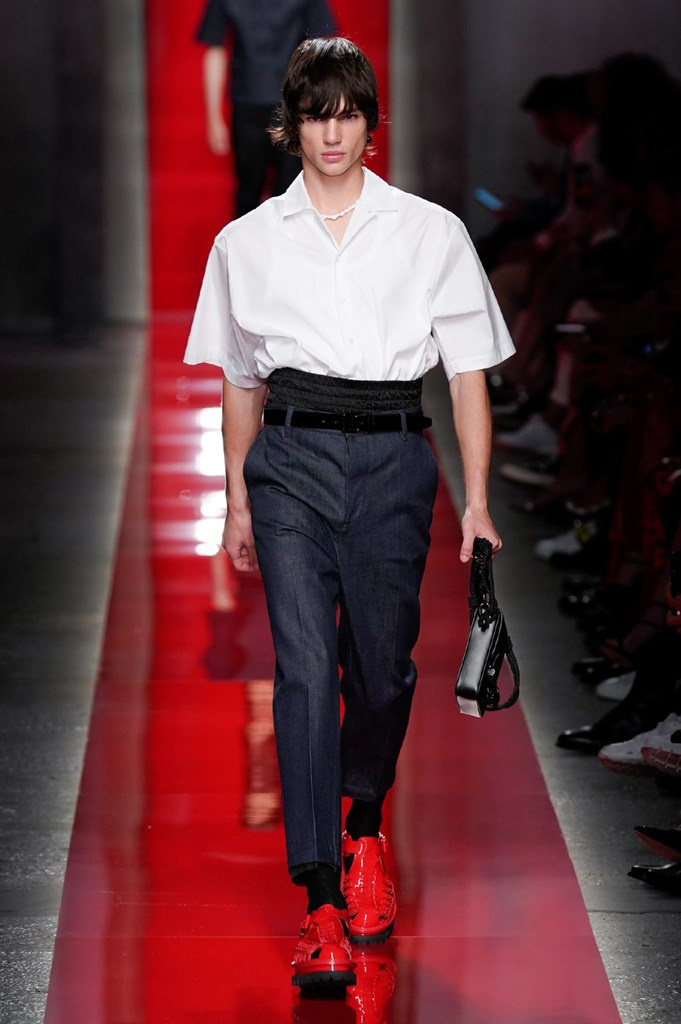 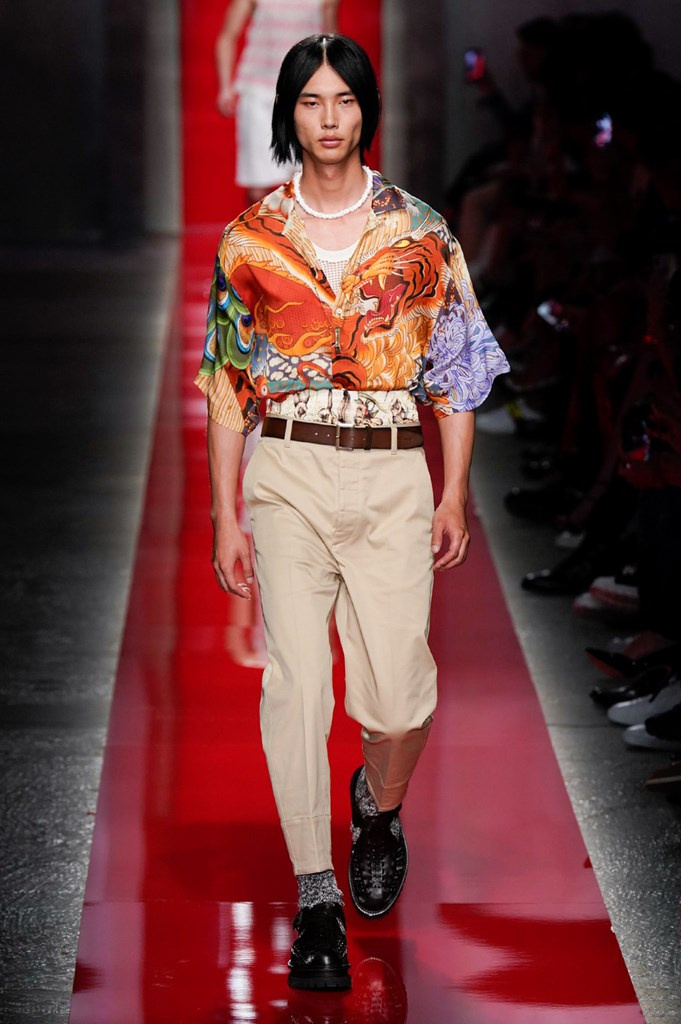 We cannot neglect the fashion put out on the runway by Donatella Versace who never fails the Milan Men’s Fashion Week. This time the designer brought spiced up her men’s runway with a trio of the most hyped women in fashion, Gigi Hadid, Bella Hadid and Irina Shayk. Gigi was seen in a sleek belted trench coat with oversized pockets. Bella wore sparkles in a sequin suit. Irina Shayk wore a leopard mini dress. The aura of the show space elevated the hype surrounding the brand when it featured a race car sculpture decorated with pink flowers and plants. 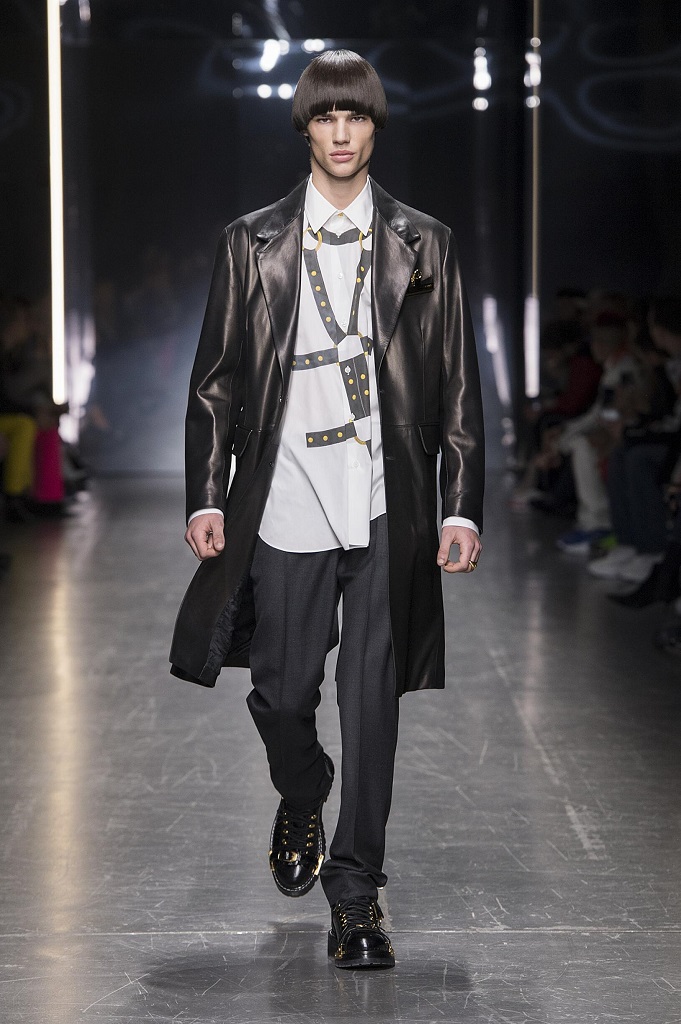 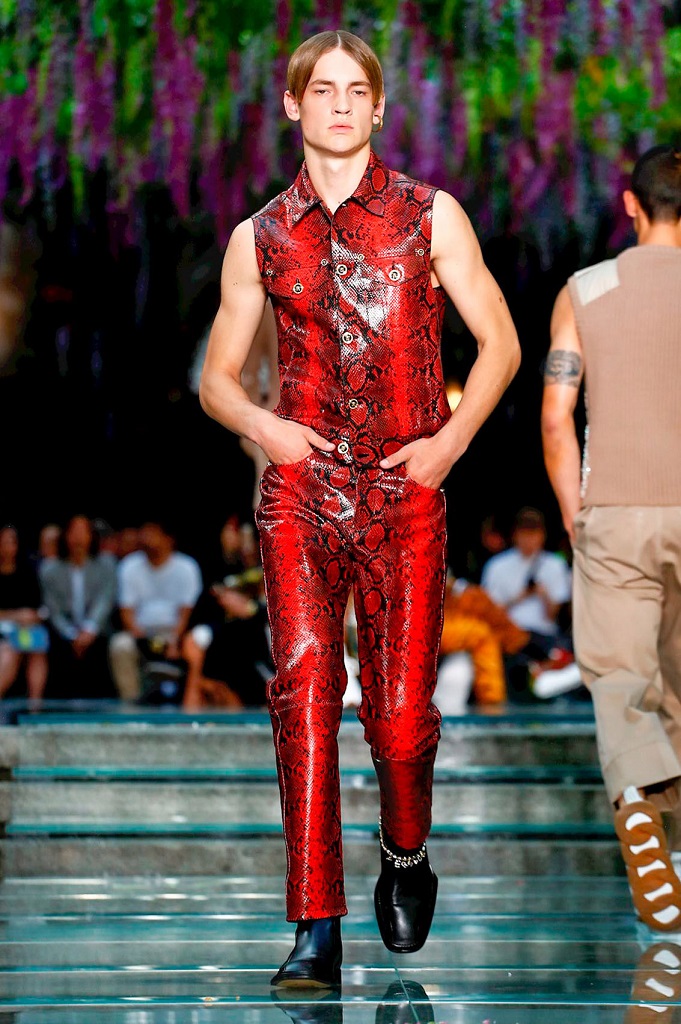 Adding versatility to the Fashion week was the zealous and dynamic spirit of activewear presented by Spyder which took the centre stage. It promised a combination of gym vibes with an essentially urban appeal. The fabrics were imprinted with patterns varying from the graphic representation of spider webs to marble-like effects and arty prints inspired by the shades of the summer sky at sunset. The compressed tops and leggings were cut in fitted silhouettes and paralleled with airy, oversized windbreakers and capes, crafted from featherweight, waterproof, and yet breathable nylons. In addition, the fleece track pants and hoodies had a slightly vintage outlook, with bands inspired by subway maps. Spyder also introduced into the runway sports apparels in geometric prints designed to bring a cool factor to the ocean waves. 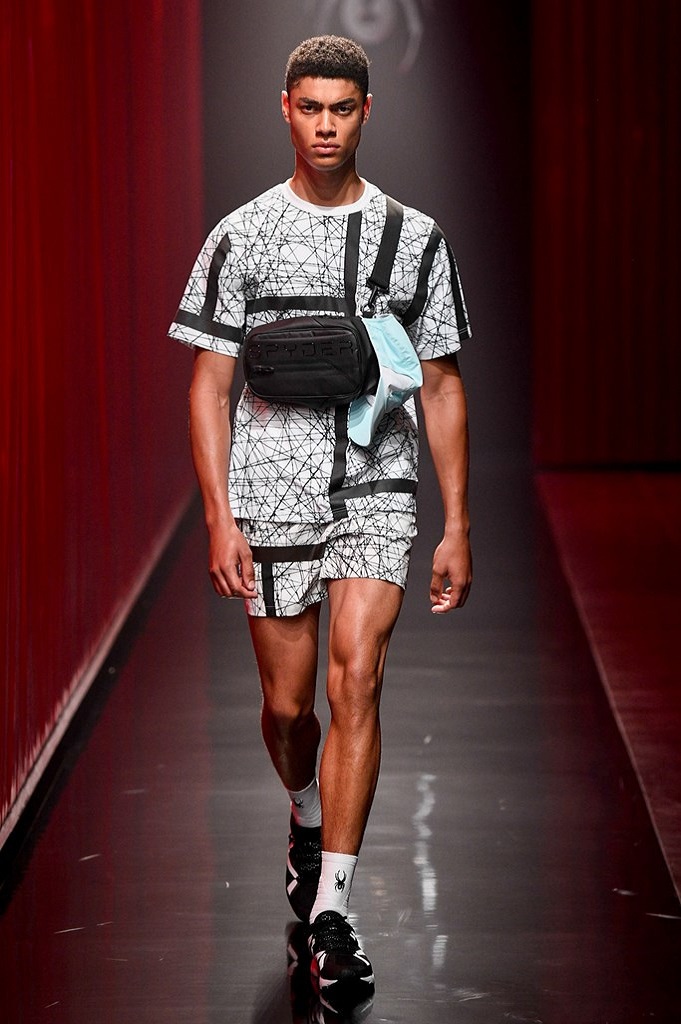 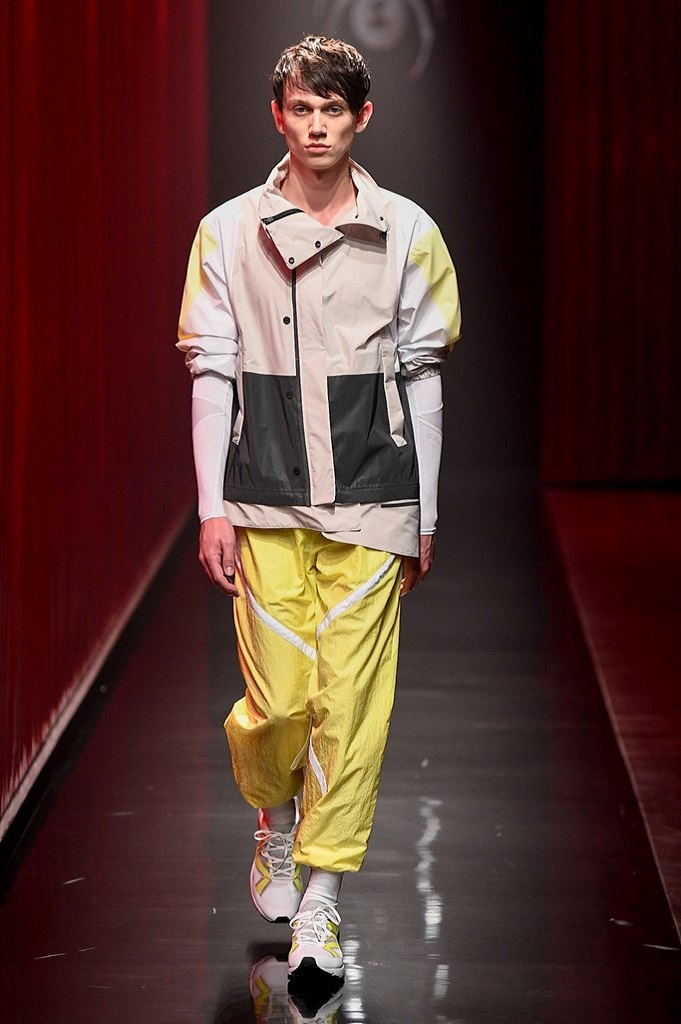 We saw both Armani and Fendi closing the Milan Men’s Fashion Week in fresh venues away from their usual showrooms. This time, Giorgio Armani has gleefully captured the liberating spirit of summer, introducing the idea of a fluid wardrobe that folds in spontaneity and elegance. The garments were essentially the waistcoat, worn either with a jacket or in place of t-shirts and shirts. The range of colours used was dense, dusty and velvety, which we saw manifesting from coffee to grey to the classic Armani blue. We saw artisanal craftsmanship blossom with new effects and treatments, imparting personality, character and luxury.

Setting a spring-summer aura, the Fendi runway was held in the gardens of Milan’s Villa Reale. Fendi invited the fashionistas to what we they envisioned as a garden picnic, with wicker chairs along gravel pathways and even providing straw picnic baskets. Luca Guadagnio, the Oscar-winning film director marked his continued association with the brand recreating the summery mood of his hit film “Call Me By Your Name.” The collection was an idea that sought to return to simpler things like caring for the garden. The models carried with them Fendi-clad watering cans, coveralls, gardening gloves and bags that had a gardener’s tools inside. The Italian collaboration’s sophistication was kept intact through the floral prints and the shirts in silk. Fabrics like hessian and raffia contributed to the back-to-nature ambience. 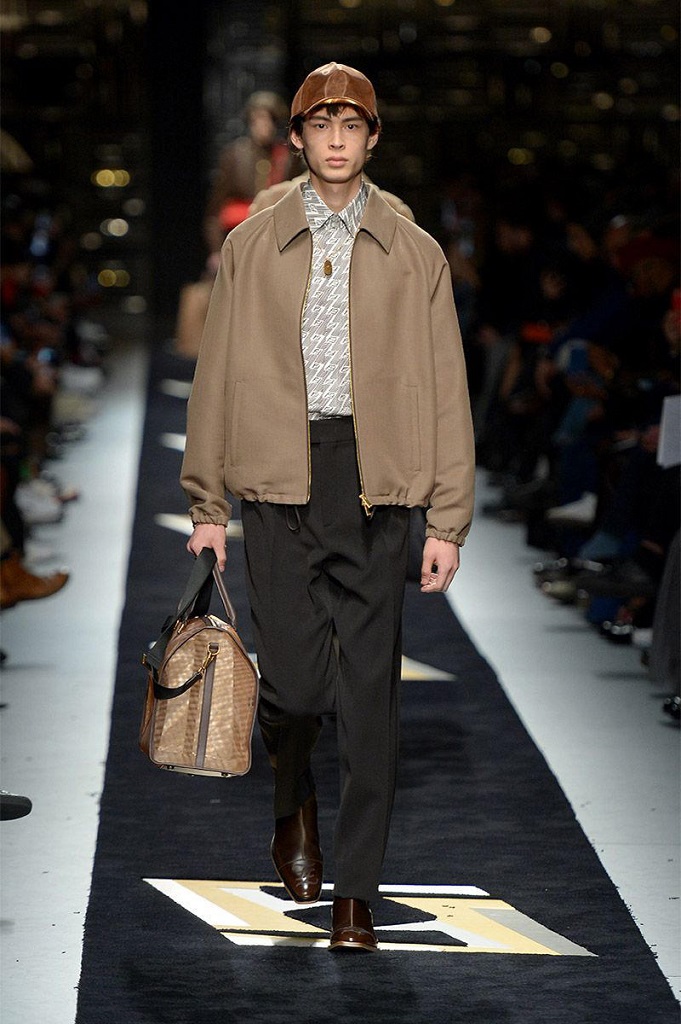 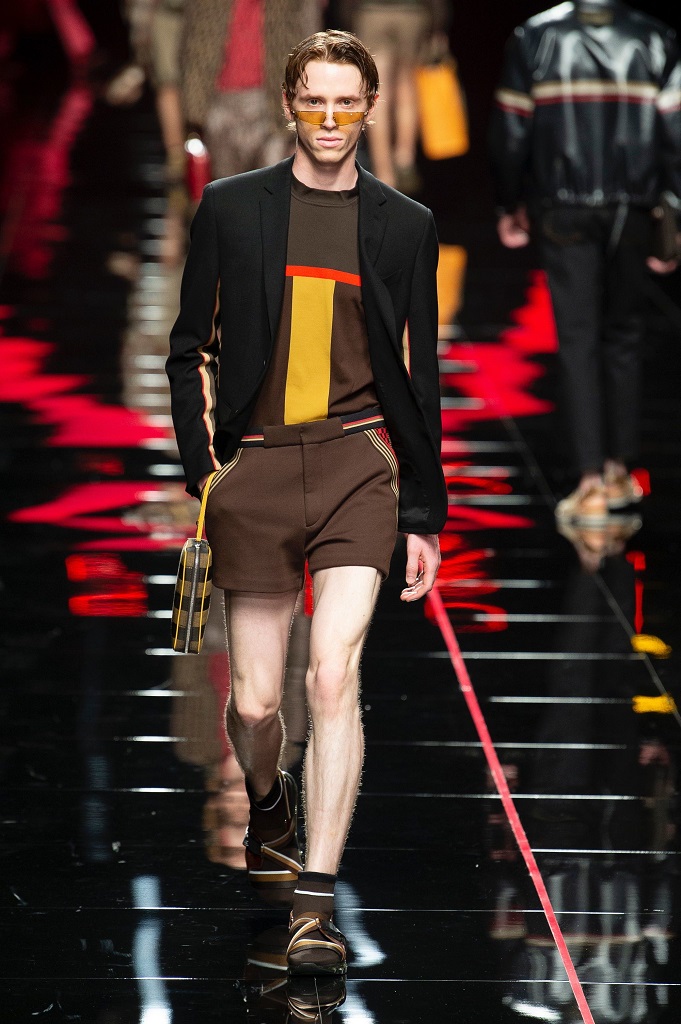 This time, Pal Zileri found his inspiration in the artistic roots of Northern Italy’s Veneto region, the place where the fashion company he works for was founded. Other brands seen on the runway were Spanish fashion brand David Catalan, Miguel Vieira, Edithmarcel, Palm Angels, United Standard, Youser, Sunnei, Phillip Plein, Emporio Armani, M1992, and many more.

There were also presentations by the genteel fashion labels. Orciani brought out a range of leather accessories for men in brown including handbags, backpacks, belts and purses. Billionaire showcased men’s coats and jackets that embraced prints as well as metallic shades like silver and gold. Other presentations that entertained the niche buyers were Tod’s, MSGM, Rolf Ekroth & Terinit, Santoni, Missoni, Marios, Canali and brands that we cannot stop talking about unless our eyes bear witness to their presentations.