Objects Of Desire | From The Magazine


Objects Of Desire | From The Magazine

Travel the world of beauty, tales and sensuality, where the pinnacle of art would thrive through your heart. Here are for you, the Objects Of Desire.


Twilight had begun to fall with the dying rays of the sun falling over the ingot of the barrel contriving an unforeseen appetite building in the abdominal to quieten the hustle of the city. The abutting seconds of the demand of the abdominal had hands on the stock of the large gun that had withstand the pastness. In the dimming light of the day, a cracking noise imposed that the action was broke opened to load the cartridges.

The tension of the hands over the gun was erupting much to the power of dropping sweat over the back of the neck, but the darkness of the cacophonous city constrained the urgency of the nerves. In a sudden stroke, the action was placed back and lifting the gun over the shoulder, the barrel was set in a distant location. With the wrapping orange line, the sky welcomed the early moon shining over the tense face of the gun holder after reflecting over its metalicus wood body that was dedicated 1400 hours and no less, to be crafted. What could be heeded after, was a raucous sound that prompted unswift exchange of voice, pursued by quick hustle of the wings raising high in the sky; and a dead drop silence.

It is absurd to consider any less drama than this, when you are being talked about the rarest of the rare piece of art that beholds the excellence of craftsmanship and the patience of tailor-made work.

Over 200 years of participation in the struggles, caution, intimacy and success of hardship, Boss & Co. emerged as London’s oldest gunmakers. When they say ‘Boss & Co’, they do not talk of a gun making brand, instead, they chant of the wisdom that gave way to a remarking revolution; a revolution that introduced Single Trigger to the globe. Up until the late 1800s, double-barrelled guns were fired with a double-trigger, one for each barrel, but Boss invented an intricate, detailed mechanism that allowed safe and reliable firing with one trigger, that was popularised as ‘The Single Trigger’. To the experts, the single trigger is not a commodity; it is an experience. King George VI had famously remarked about Boss & Co., 'A Boss gun, a Boss gun, bloody beautiful’ ; that is a statement that speaks volumes about the greatest gunmaker of the generations. 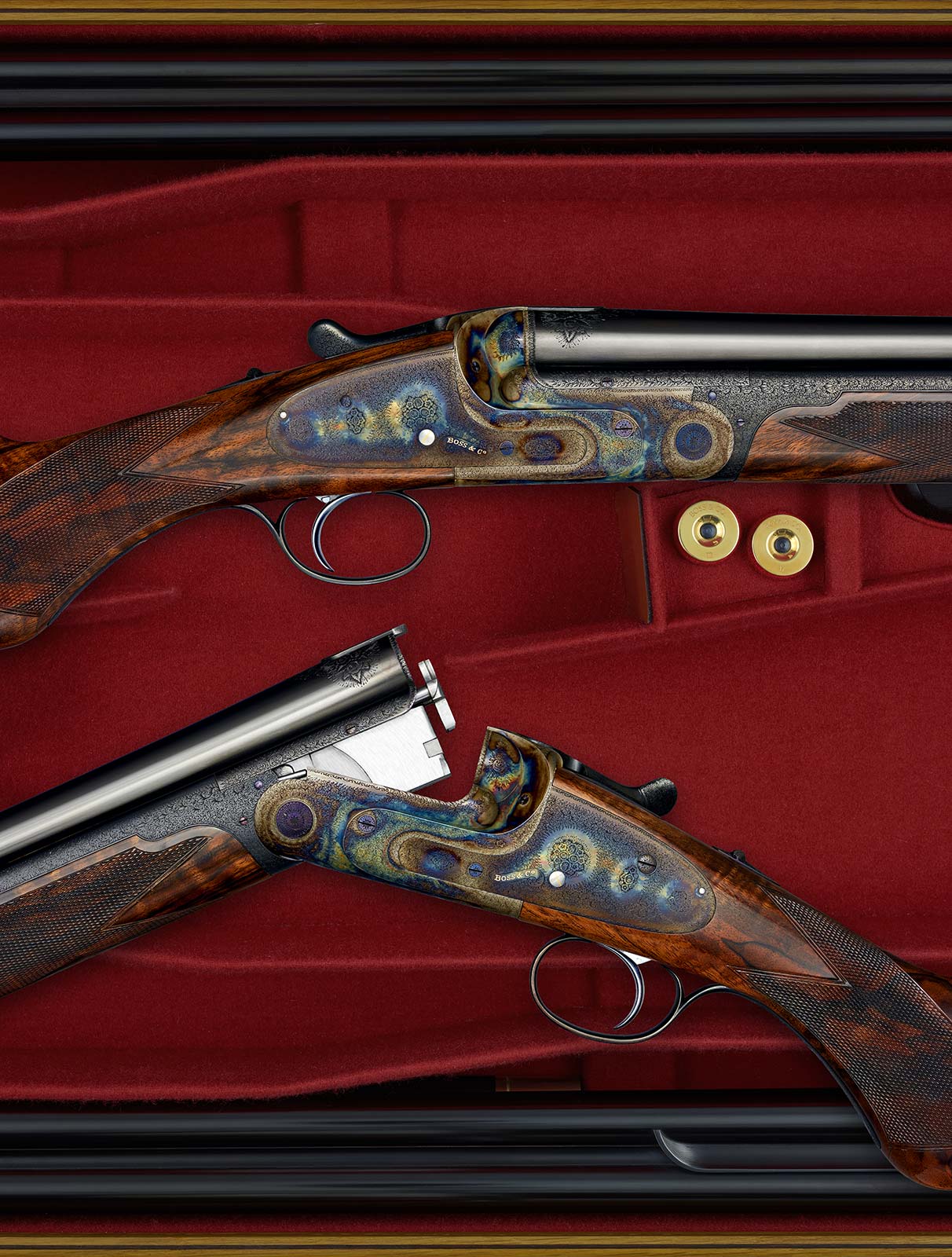 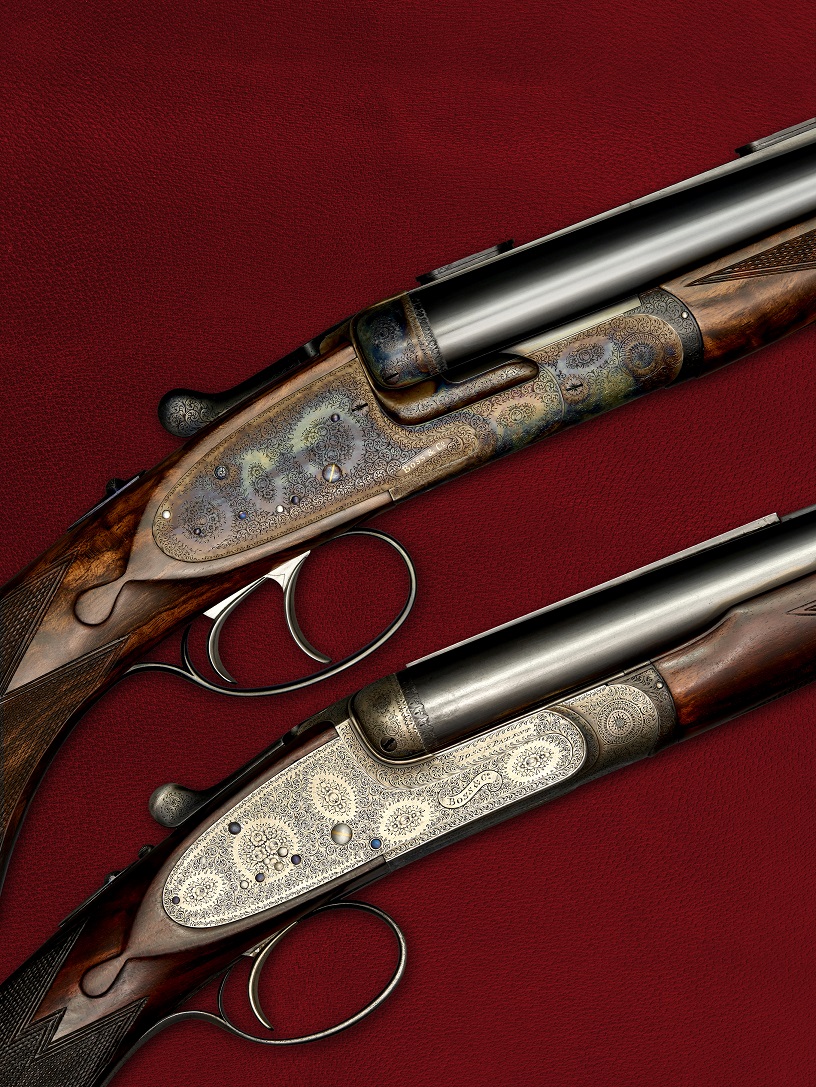 The Single Trigger represents a lifestyle, with many of them being owned by professional shooters, aristocrats, and celebrities. With every gun being crafted as per the owners' measurements, they provide a shooting experience no other gun can parallel. They say, “Best Guns Only”, for, each piece of the gun is a form of art, custom designed to reflect the alter-ego of the owner’s vision. Boss & Co are regarded as the makers of the finest guns in the world in an environment where everything is changing rapidly, their values and heritage have stood the test of time. Since their humble beginning, all Boss & Co. guns are crafted using a labour intensive process, with around 1400 hours being put into each gun. Even now, every Boss & Co. gun continues to be handmade. With every gun bespoke to the owner it is the best a man can get.

While we talk of the Boss & Co., LA POLO’s latest edition brings way to numerous of these Objects of Desire. Let’s travel along to read a few.

The early morning sunbeams fell on her soft face, twitching her blue eyes. Her white hand rolled over the linen bed sheet to reach her hair where she as a matter of habit rubbed them lightly. In a lazy mood of her dull heart she put her pink feet on the cold floor to walk towards the window and look beyond the world that did not welcome her. She let the drizzling wind touch her skin to kiss away the tears of her eyes, for she knew, her beautiful white wings have been detached from her body and now she was nothing but caged... 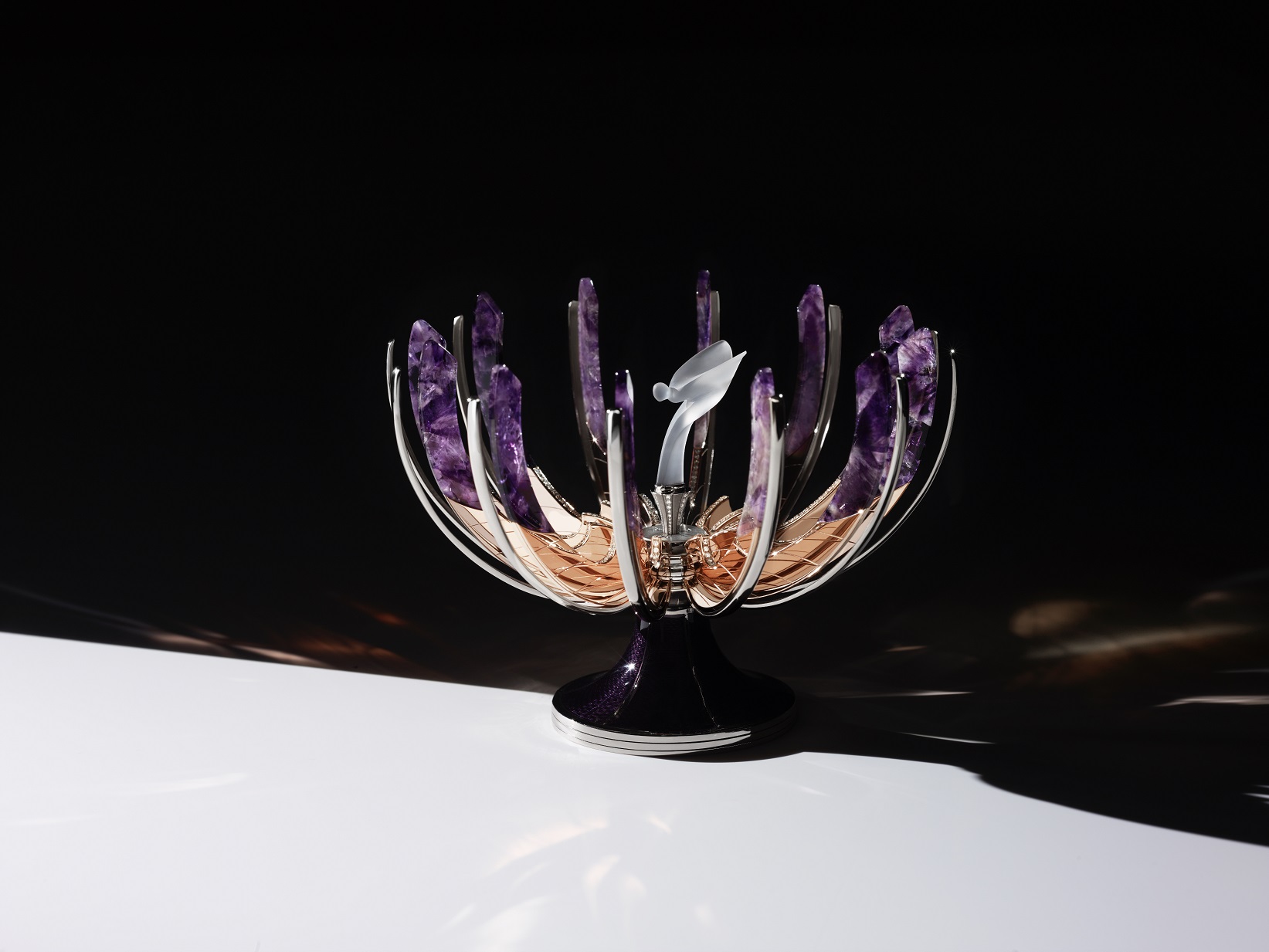 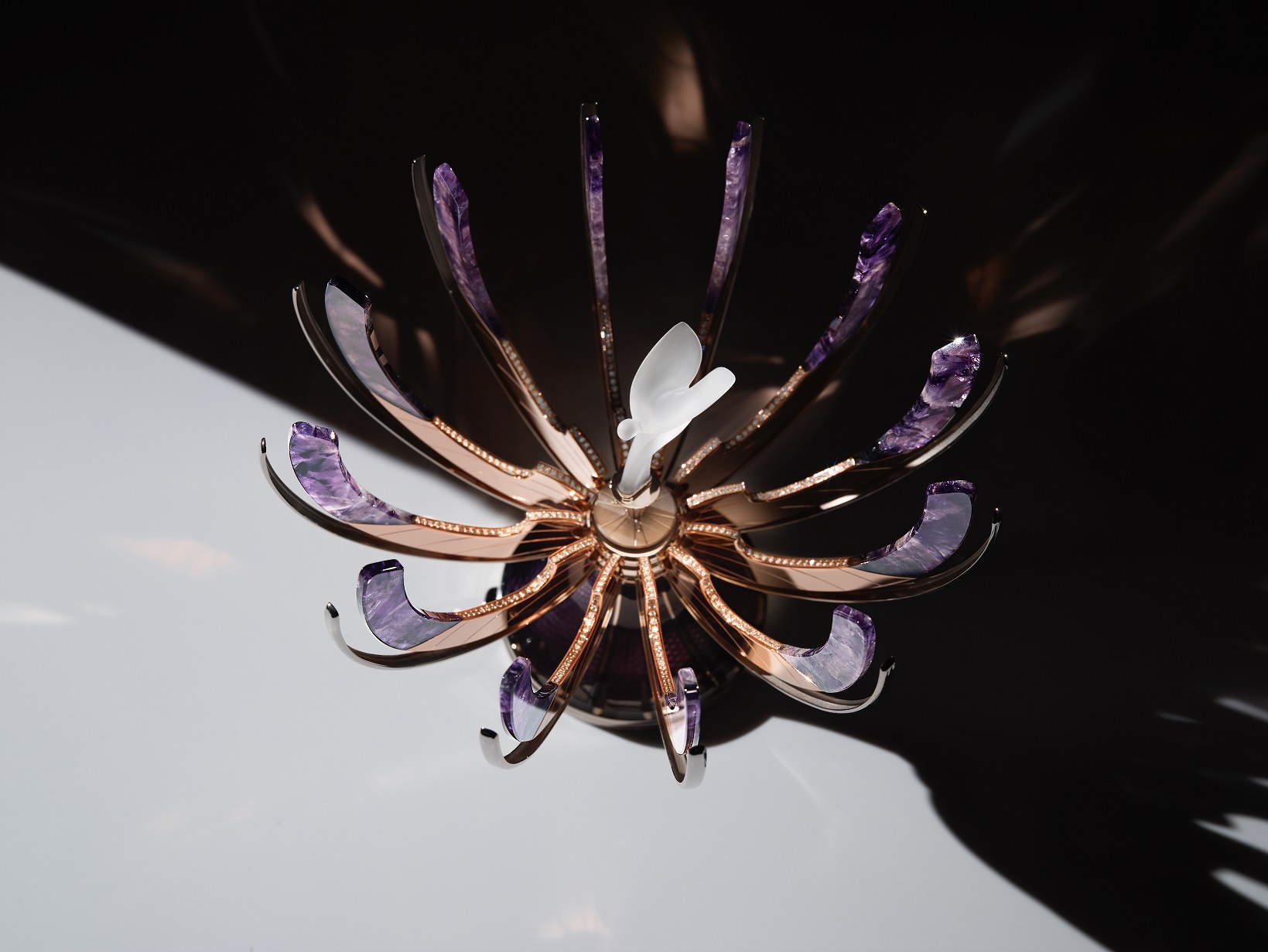 She was caged in the ways of the world, that beguiled her to live not beyond the decorousness of it. The decorum that the patriarchy has laid on her, where they had chopped off her wings, not once, but every minute. She was enticed, for, she was told that she is meant to be this and she was tied, only to see her break through it with the power that took birth inside her. The intensity of smashing the walls of the cages had her leaned with her arms forwards and her billowing white cloth as her wings tied in the clout of her purple dreams. She flew blooding the cage while her preserved dreams secured her way, and she was the “spirit of ecstasy” bonded in the preciousness of the Faberge eggs.

The “Spirit Of Ecstasy” creates an exceptionally precious sensation for the ornamental expression of Rolls Royce and Fabergé Egg where they have joined hands to give rise to an iconic marvel.

While the spirit was high on its iconic self, the Objects of Desire that waits to ahead in LA POLO’s latest edition is the luxury now of Bigi Cravatte Milano. 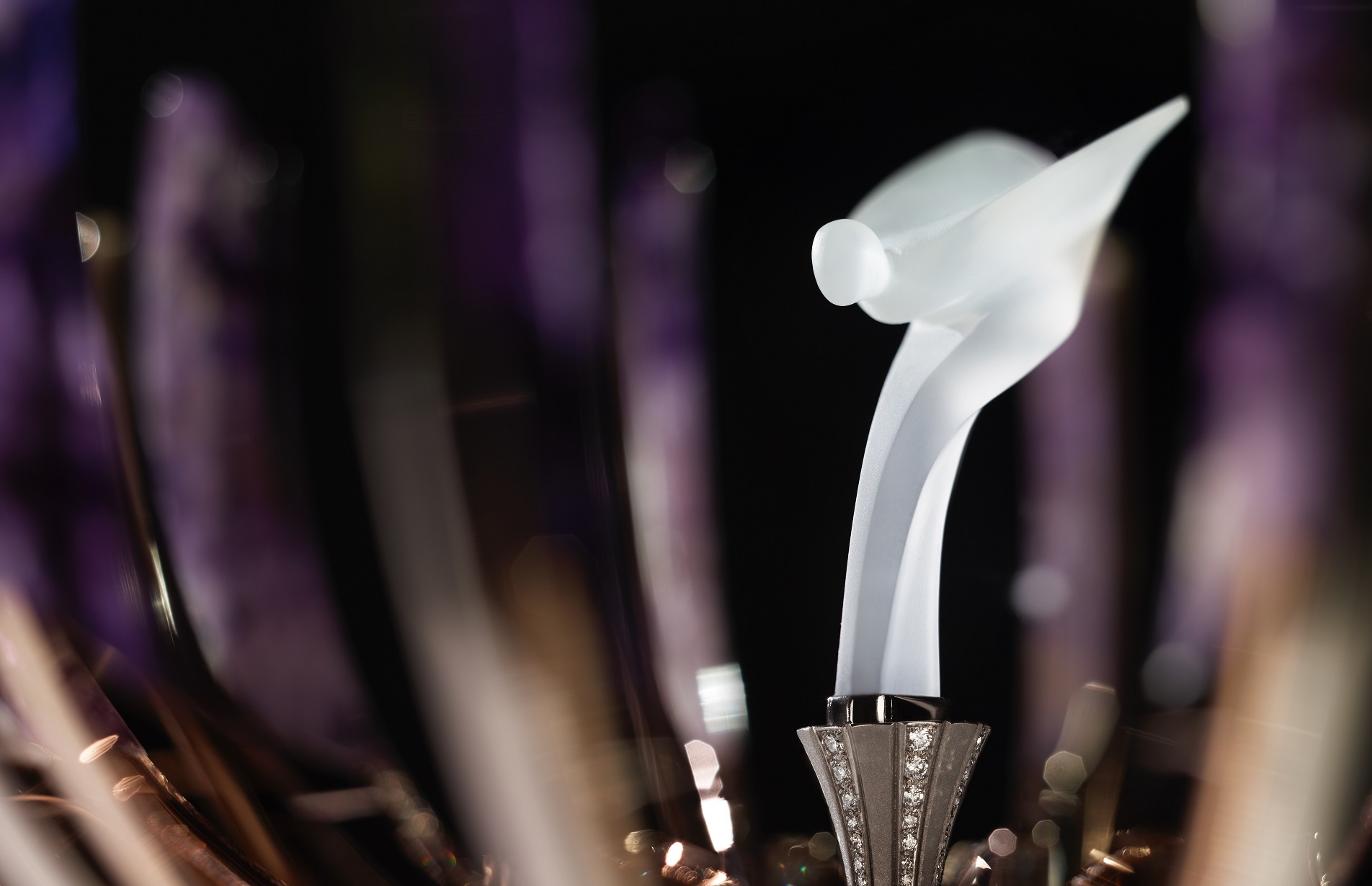 They handed over affection cloaked in dedication to look over a smile of contentment spreading over the young fragile face that had the lips apart to let the warmth of plaudit formulate in words. And there stood Stefano and Paolo Bigi with their eyes glow as they recollect the smell of the silk that possessed the strong hands of their grandfather. It all started in 1938, when Luigi Draghi, their maternal grandfather, had his vision of sophisticated style around men’s neck in form of bow ties. He worked in passion and determination upto countless days and sleepless nights for his pride of elegance to hover from dream to the exclusiveness of reality. Adding the charm of fairness, morality, respect and love for the ties, the preciousness of reality was passed in the hands of their father, who made these principles the character of the company. The vision still stands clear in the eyelids of the duo, even after three generations and for every dream today they tie a bow of positivity dwelled into the contextuality of modernity. 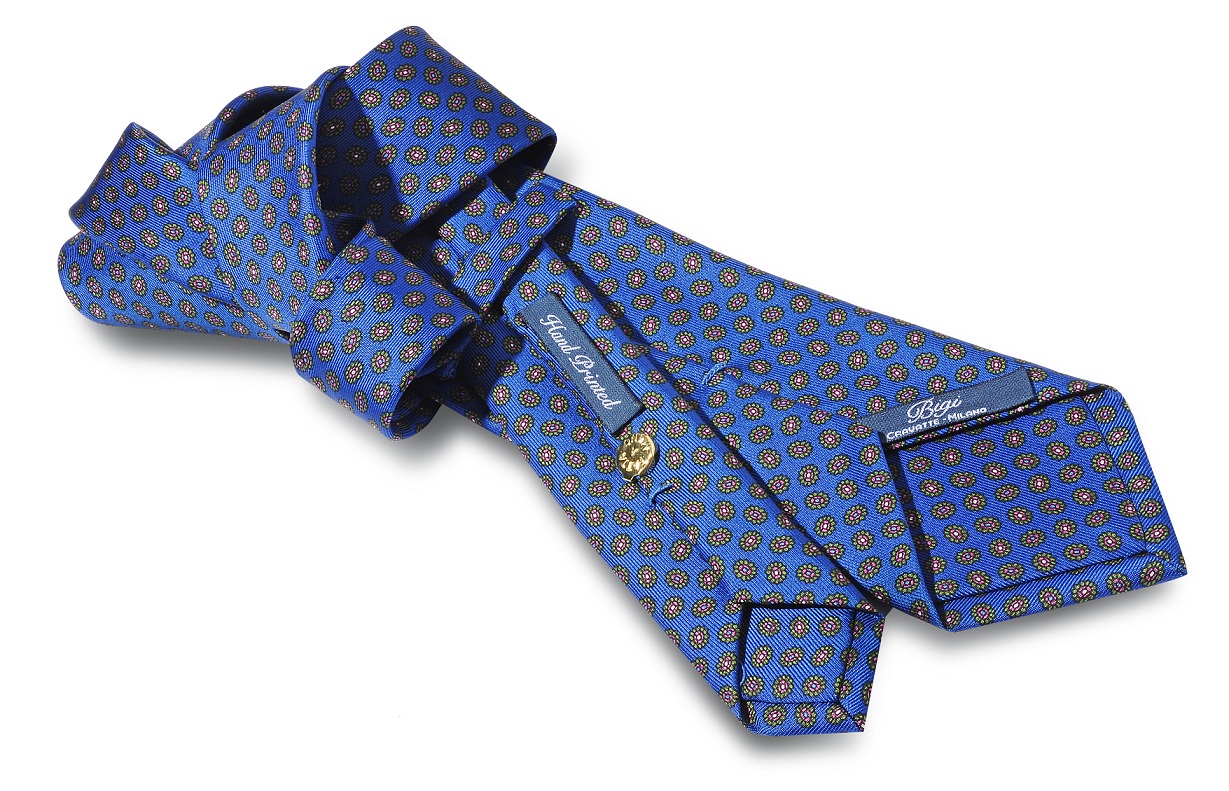 Neckties are a result of classic DNA where the exploration of the materials are done with great investigation. The measured search is followed by the creation of unique piece where the necties are hand cut that are patterned with hand down years old technique wrapped in the preciousness of the past experiences. Appealing to the aesthetic sense, the mission of Bigi Cravatte as they is to “diversify the product serving the different demographics proposing several styles, solid patterns, stripes, dots, in a lot of different quality fabrics. Two lines make up the Bigi Cravatte Milano collection, responding to the demands of sophisticated and elegant man who loves a classic style but does not neglect current trends, a first way to segment the marketing campaign. The two lines, Etichetta Blu, classic and sophisticated, and Etichetta Azzura, more casual, satisfies the demand of European market but at the same time the Asian, Korean and US customers too.” 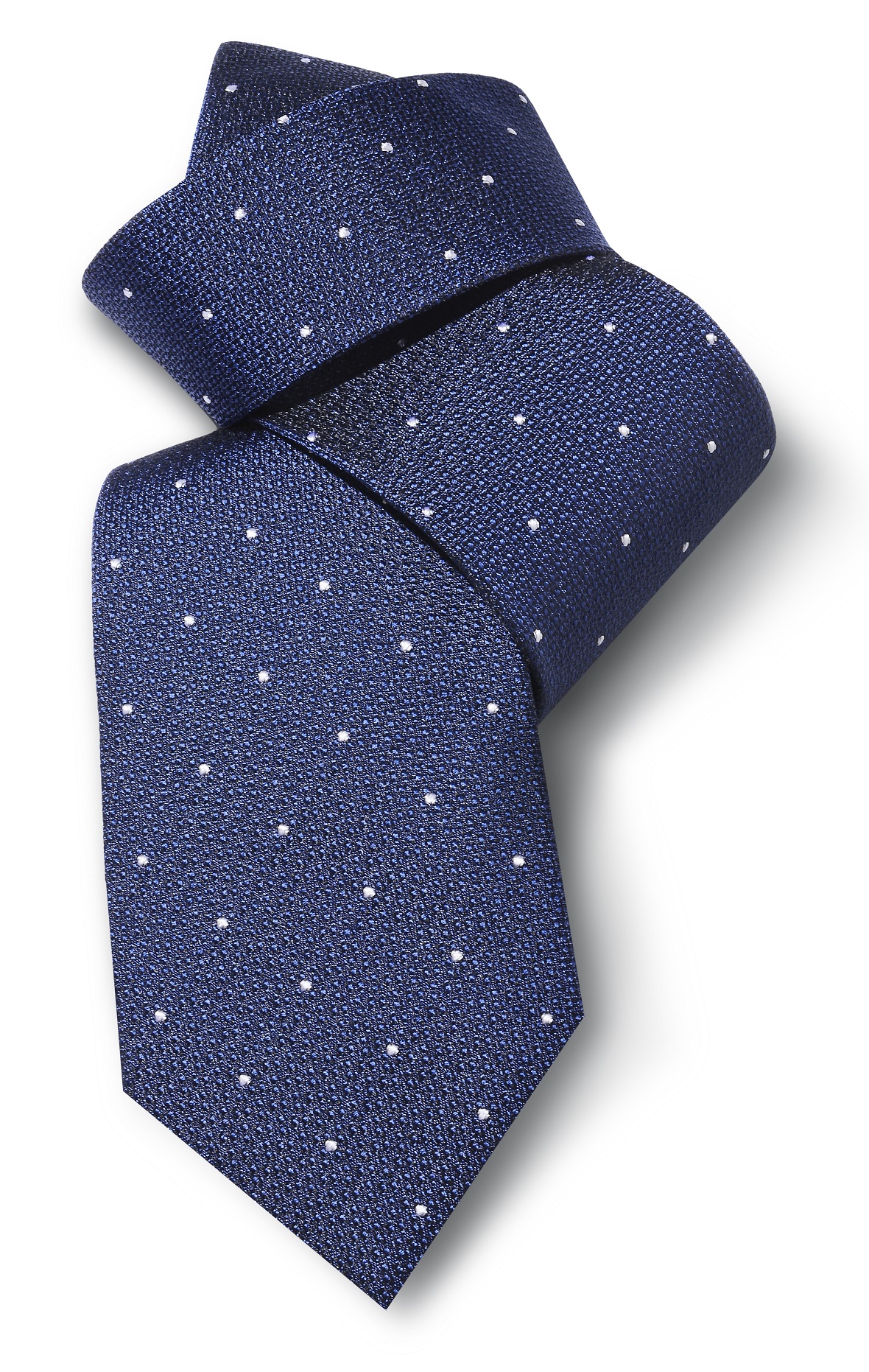 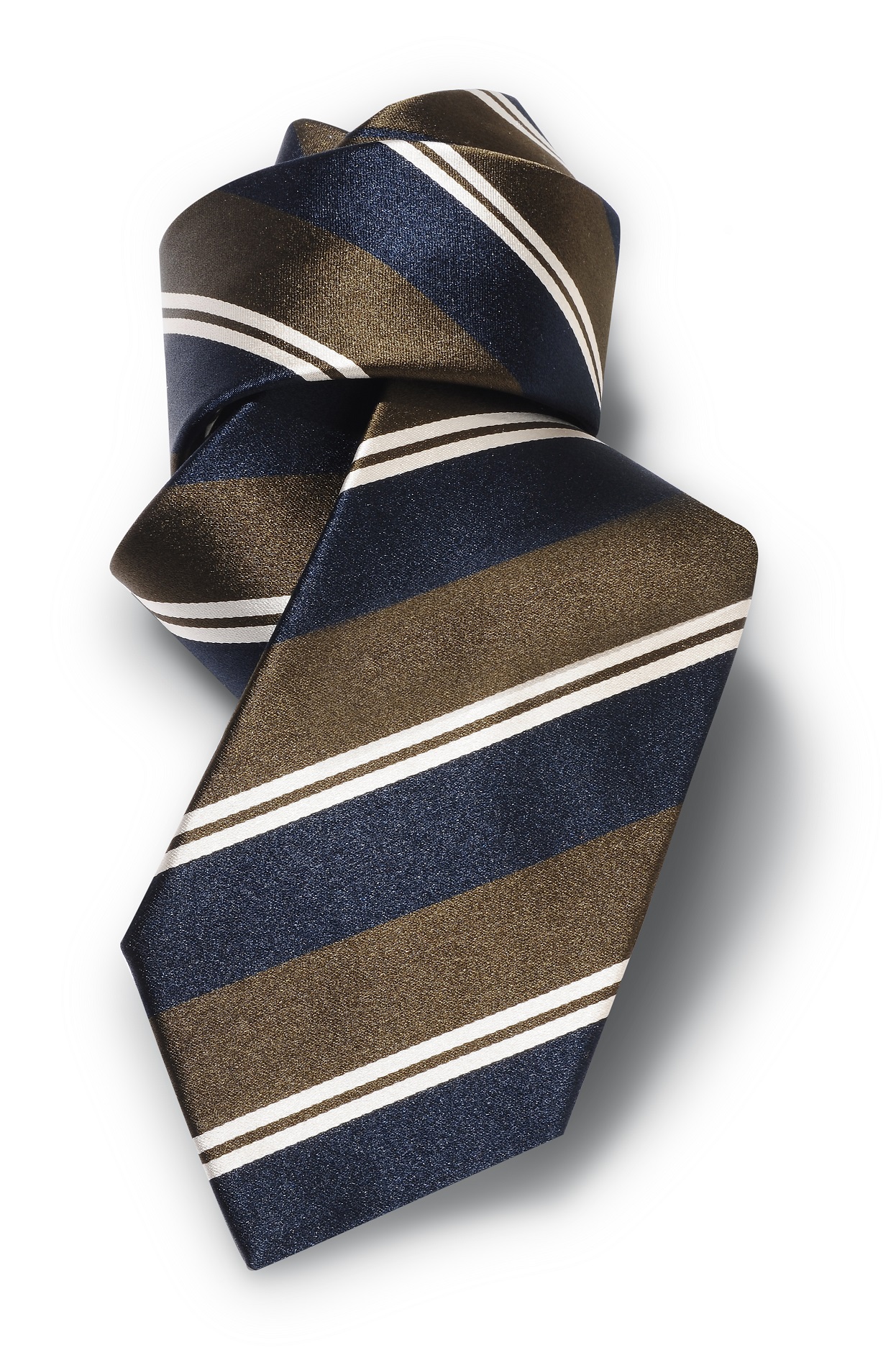 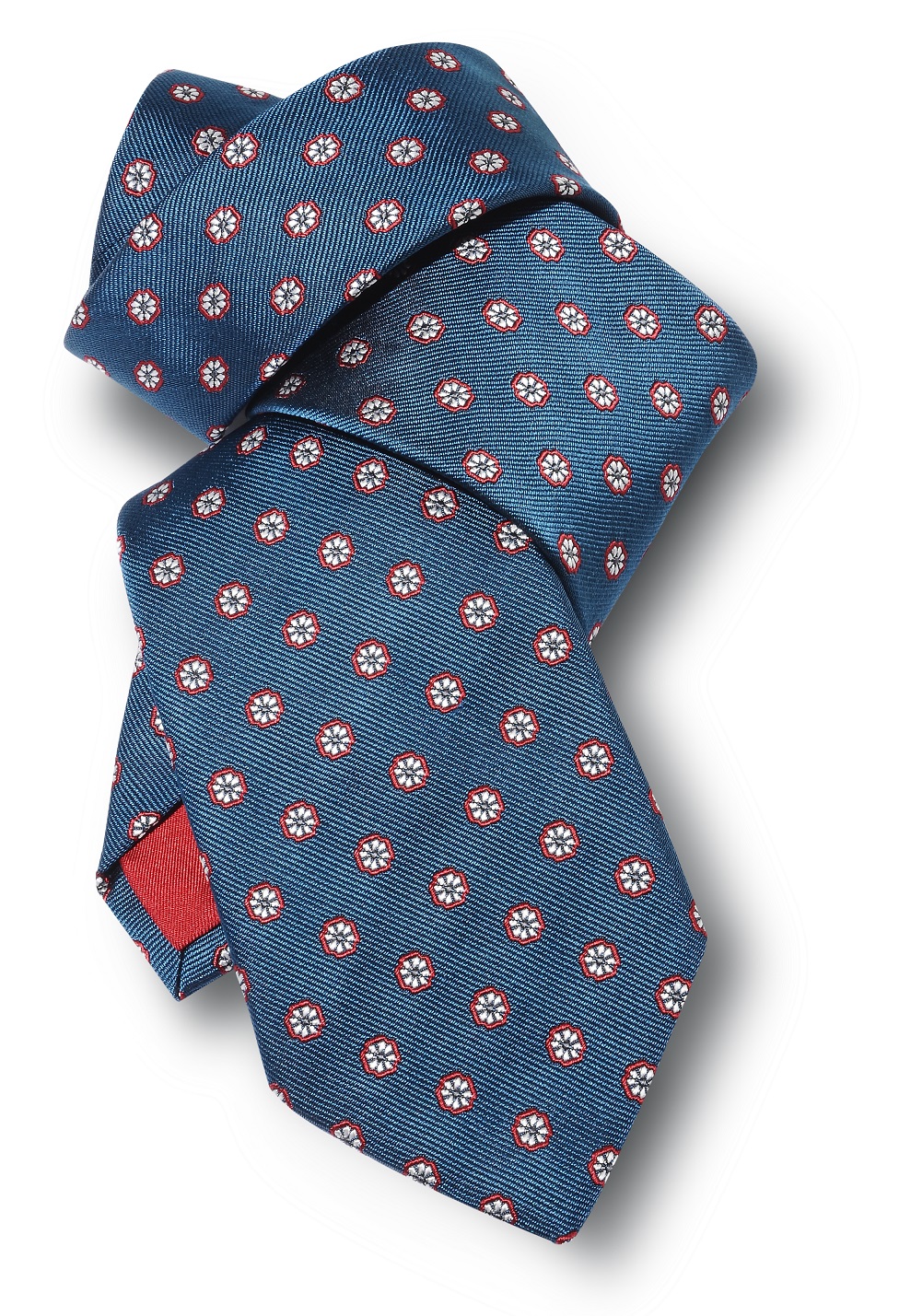 It’s a union between craftsmanship and opulence dwelled in the uniqueness of the tradition.

It could be heard, even from a distance. The sound was as loud as the roar of the lion, real and unaltered, locked behind the door. Behind the door, where, the man sat on his throne made out of wood and nails, bathed in sweat. He sat untouched, among his pipe, wires, tools and the loud, hot, burning furnace bent over his large wooden table with sweat moving down his spinal cord and settling with speed over his forehead. The hotness of the room has absorbed him, making him forget about the cold noisy breeze that had taken over the town. He lifted the burning glass in his tensed hand, shaping it to perfection, tossing it between his fingers, while the roar of the furnace got louder with every minute. In a hustle, he got up, took the pipe in his one hand, while the shaping tool in another. Blowing his breath in the pipe and shaping the burning glass with the tools, his hands under the gloves started to burn but the burn did not bother him, for, he could see the piece of glass in his hand turning mortal with a portion of his own life, his own breath. And in perfection, the man shaped the gift of the glass 160 years ago, the man who is celebrated as Ludwig Moser. 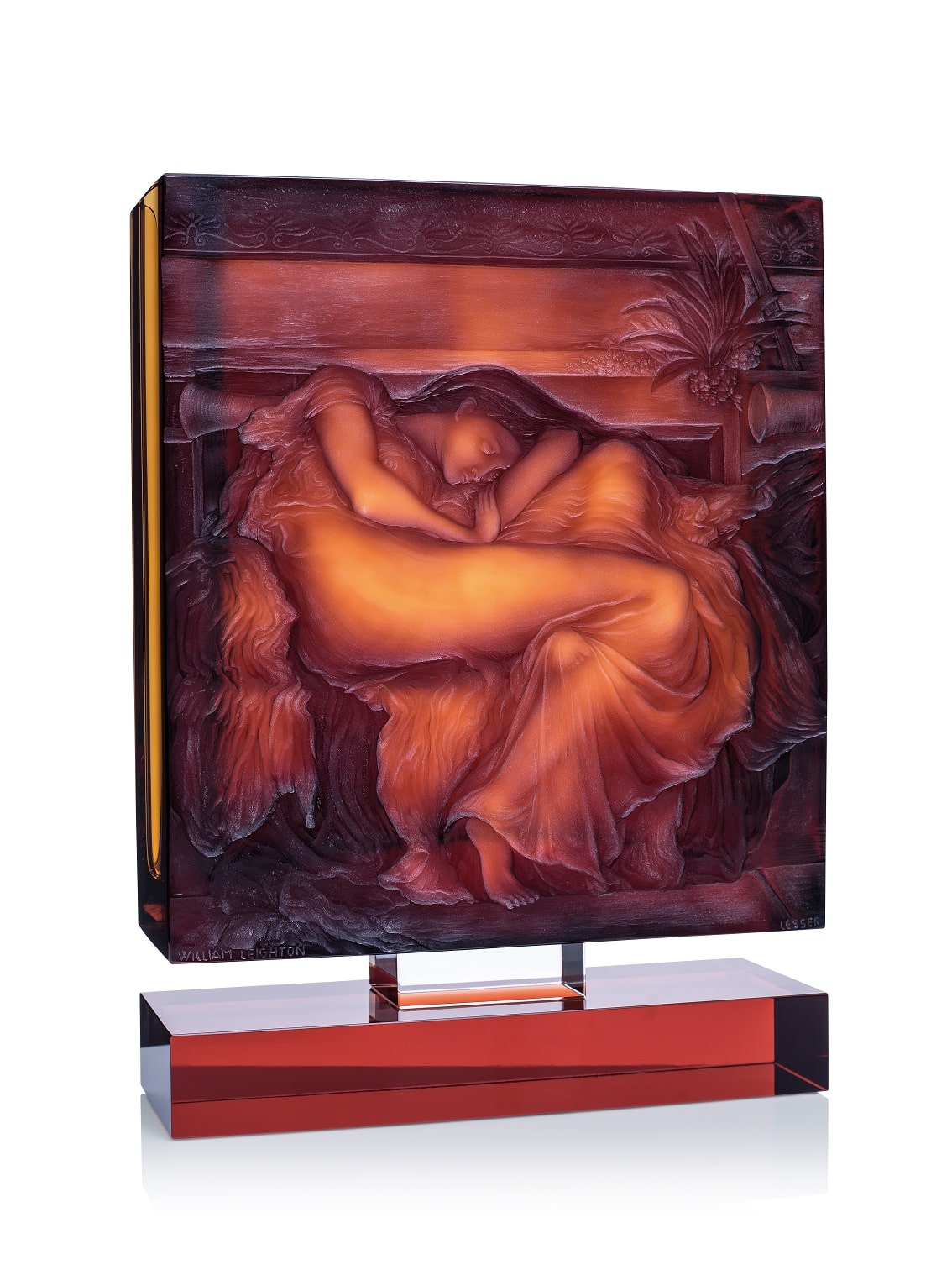 Breathing life into glass, at Moser Glass, they evolve with the finest element, where each piece is no less than a piece of art, inspired by the works of art. Per say, ‘Flaming June 3375’ comes as a result of the original painting Frederic Leighton, 1895, original in the Museo de Arte de Ponce, Puerto Rico. The inspiration for the motif is inspired by sleeping nymphs from Greek mythological sculpture where the master engraver has portrayed the strength, atmosphere, and the inherent beauty. Equivalently, ‘The Birth Of Venus 3368’ had the inspiration of Sandro Botticelli, 1484 – 1486, original in the Galleria degli Uffizi, Florence. The image originated in the Renaissance around 1478 and is inspired by the Homeric Hymns.

The picture captures the moment when Venus emerges from the sea borne on a seashell and the west wind carries her to the shore, where one of the Horae (goddesses of the seasons) gives her a cloak studded with flowers.The image consists of three separate themes, that has been divided into three vases – a triptych. Each work has a main motif, that together make up one image of the Birth of Venus. On the first vase Vladimír Skála has portrayed a pair of flying zephyrus (Zephyros God of the Wind and his wife Khloris), who symbolizes passion and combine the spirit with matter. 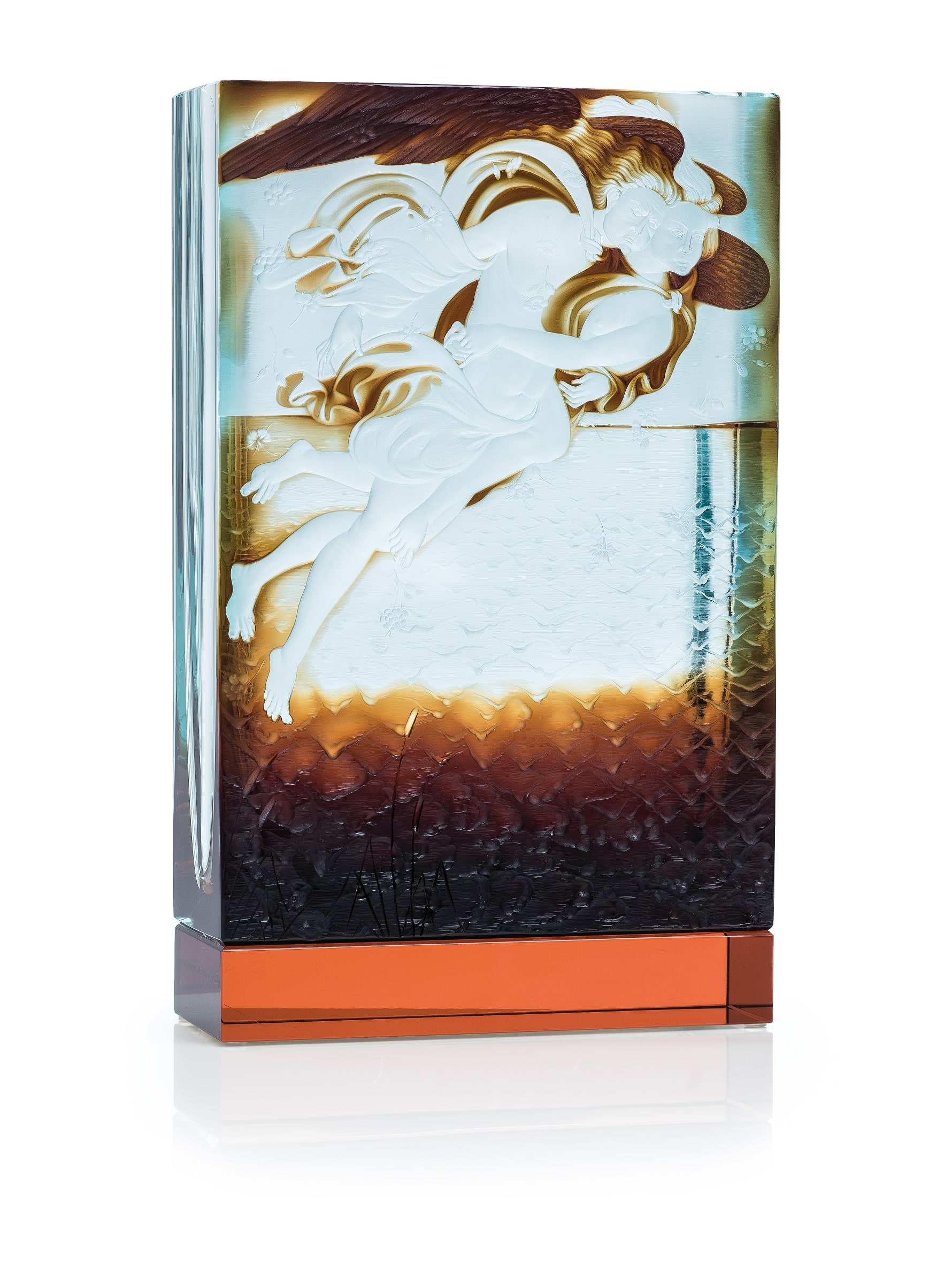 In preparation for this work the master engraver spent several months studying the figures and colour hues, that he finally achieved through a deep sensitive scratching at the layered colours. Thus breathing life and the strength of uniqueness into the motif. Correspondingly is the ‘Belvedere 801’. This bowl complements Maria Theresia collection and was created to celebrate the 100th anniversary of this set in the year 2013. Perfectly highlighted with a unique combination of layered coloured crystal work invokes a deep experience. Hand cut, blown, engraved and polished, the vase is a tour into the world of dreams.

It felt like holding magic in the hands, preserved for more than 130 years. The scrap of it, endured as the genealogy of gleaming brown skin tied together closely with a thread. Retaining the quintessential culture of the pastness, the skin uphold the tale from the feet of the knowledgeable sophisticated lots, those have once ruled the esteemed university of the world. “The Quintessential Of All Classic Styles, The Elegant English Oxford…”, as they said it once, has attained its identity as the most formal wear from the famous English institution, Oxford University. Crockett & Jones, with pride sing of the birth of ‘The Oxford’ that is crafted, designed, paired and brought out after a process of eight weeks involving over 200 individual operations across eight distinct departments. 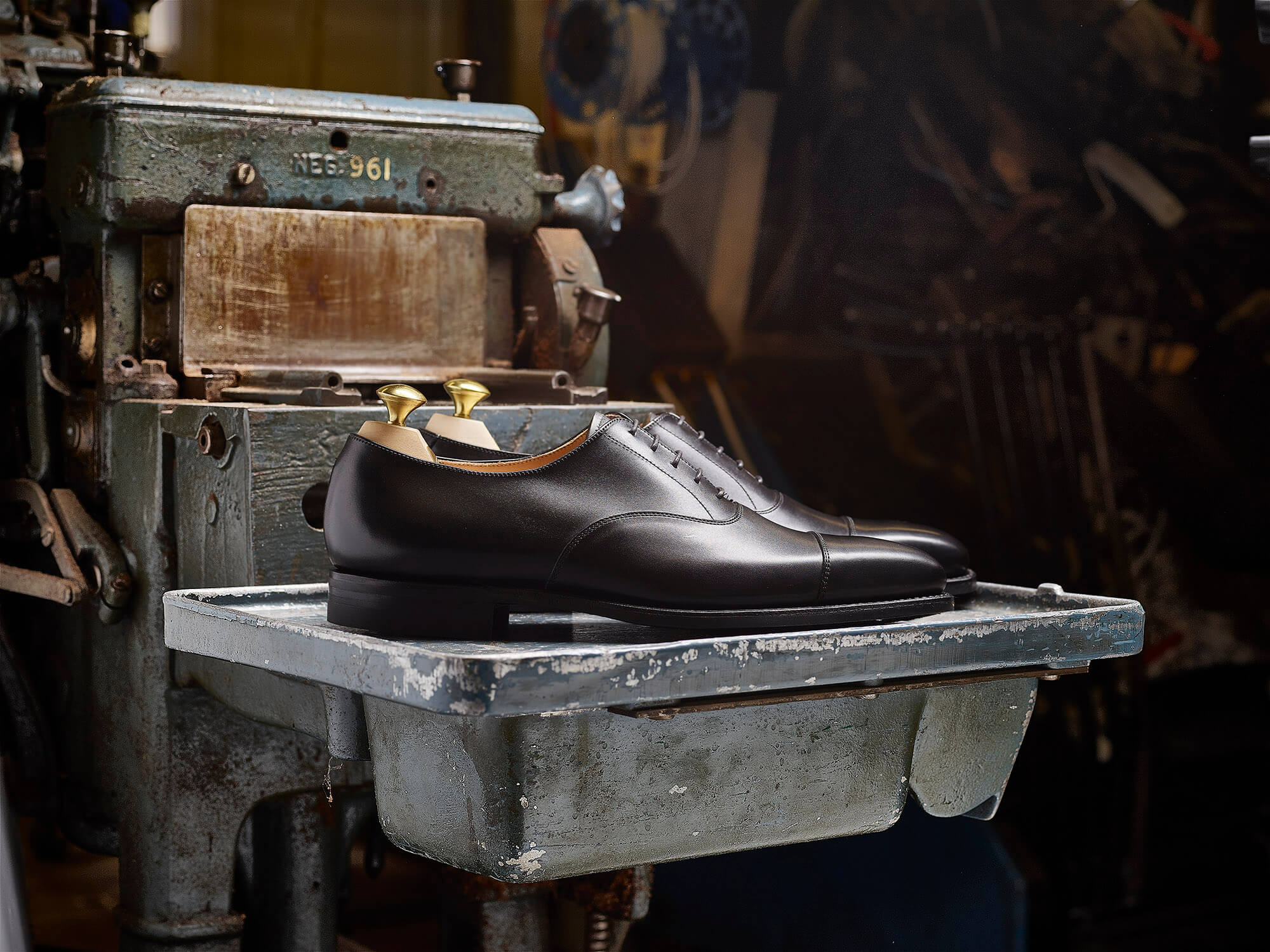 The making of ‘The Oxford’ at Crockett & Jones is drafted marvellously. And such are the other Objects Of Desire that await your eyes and time. Read along with LA POLO those secretly binded stories by grabbing our latest edition. 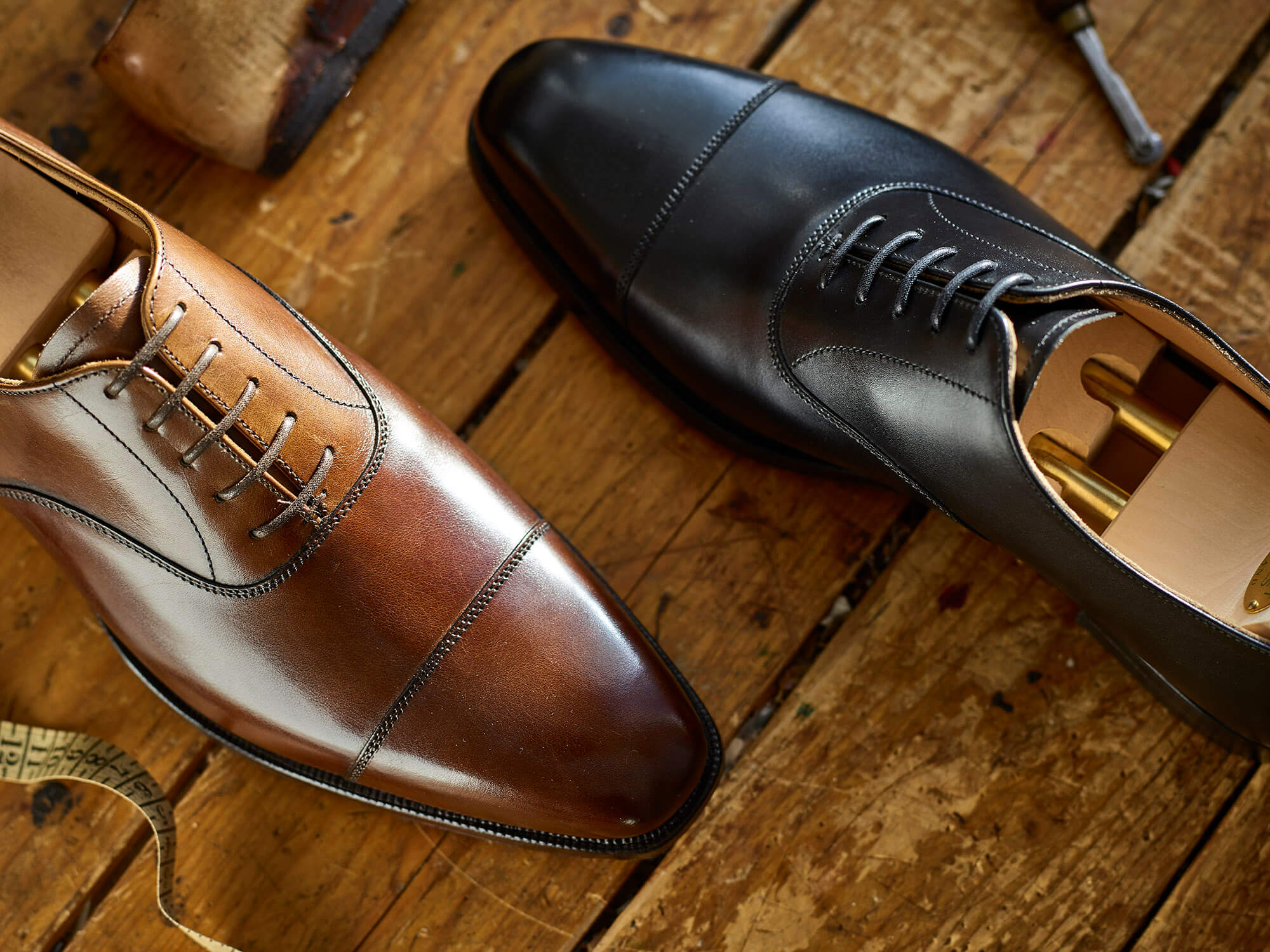 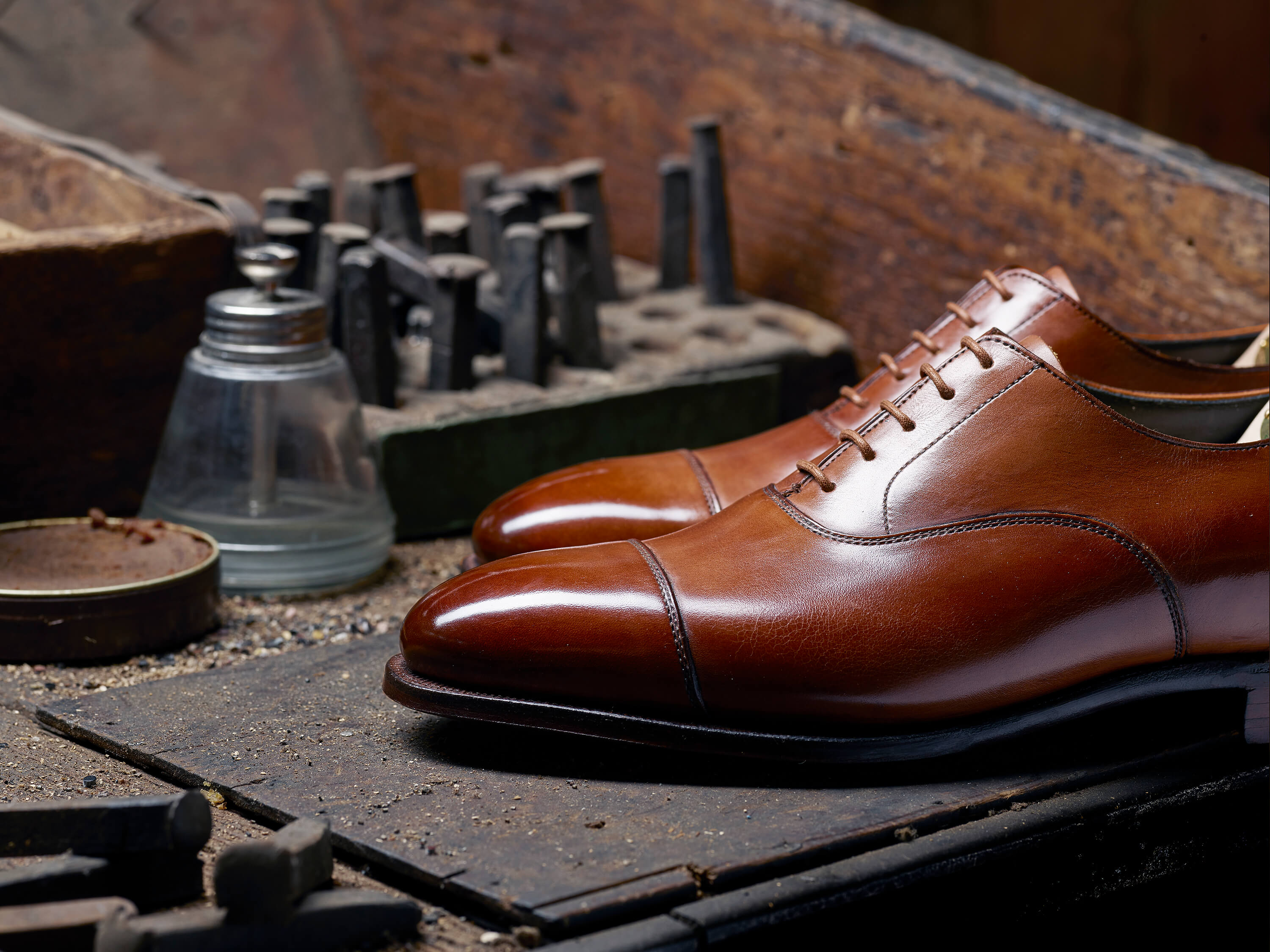