OLDEST HORSE RACE IN THE WORLD: THE PALIO

When in Siena, feel the pulse of the oldest horse race in the world: the famed Palio, a game of superb skill and cunning


The song “Sempre in alto le bandiere, sempre in alto il nostro amor…” translating to “always up the flags, always up our love…” is what the locals in Siena sing, marching down the streets with their contrada’s jockey and horse. The city’s on edge while Piazza del Campo, the town square, swells up with people of all backgrounds, hoping to catch a glimpse of the galloping glory of each contrade. The Palio encompasses all the rage, emotions, passion and unprecedented obsession that are rare to find in any other sport.

Palio lets out everything that’s inside of people in Siena, who during the rest of the year are very quiet and measured. Sienese let go of their feelings of love for their contrada during Palio. This love has been nurtured by their grandparents and their ancestors, as it’s a centuries’ old tradition. Siena is divided into 17 contradas. The strong sense of belonging the Sienese have towards their contrada, and the wild passions that Palio awakens every year in the city is truly amazing.

Enveloped by olive groves and beguiling vineyards, Siena is a picturesque medieval town in the heart of Tuscany, Italy. The city is marked by meandering alleyways and steep steps, whilst the Piazza del Campo resides at its heart. Siena is famed for its annual historic horse-race. The magnificence of Palio lies in its history--the centuries’-old sport has a vivid heritage. It’s like going back to the 1400s, with men and women arrayed in the colours of their contrada and festivity all around, making it look a lot like a theatrical town. Full of high spirits and violent outbreaks, historical connect and emotional attachment, the Palio is not a mere touristic event. Twice a year in Siena, the city steps back in time and puts on one of the greatest shows on earth, a living ritual. The sport is full of passions and pride, played seamlessly in the heart of Tuscany for over a hundred years. “It’s a ritual that’s remained unchanged. You can feel the emotions that the people felt centuries ago.

“It’s an arcane world, an umbilical cord that links the Sienese with their ancestors and they have to make sure it will be passed down to their descendants,” says Cosima Spender, director of the movie, The Palio. Spender was born in Italy to a family of resident British artists, and grew up outside of Siena, where the Palio race is held every year, on July 2 and August 16, before she moved to England at the age of fourteen.

“During the weeks leading up to the Palio, the whole city becomes increasingly tense. Citizens are seen discussing the Palio in every café and street corner, conjecturing all sorts of scenarios that will take place the day of the race. Everyone is playing this serious ‘guessing game’. It’s an obsession. Normal life is put on hold for one or two weeks. The day after the race, the streets are quiet but for the beating of the drums of the victorious district that parades the city, singing and flaunting the glory,” she said. 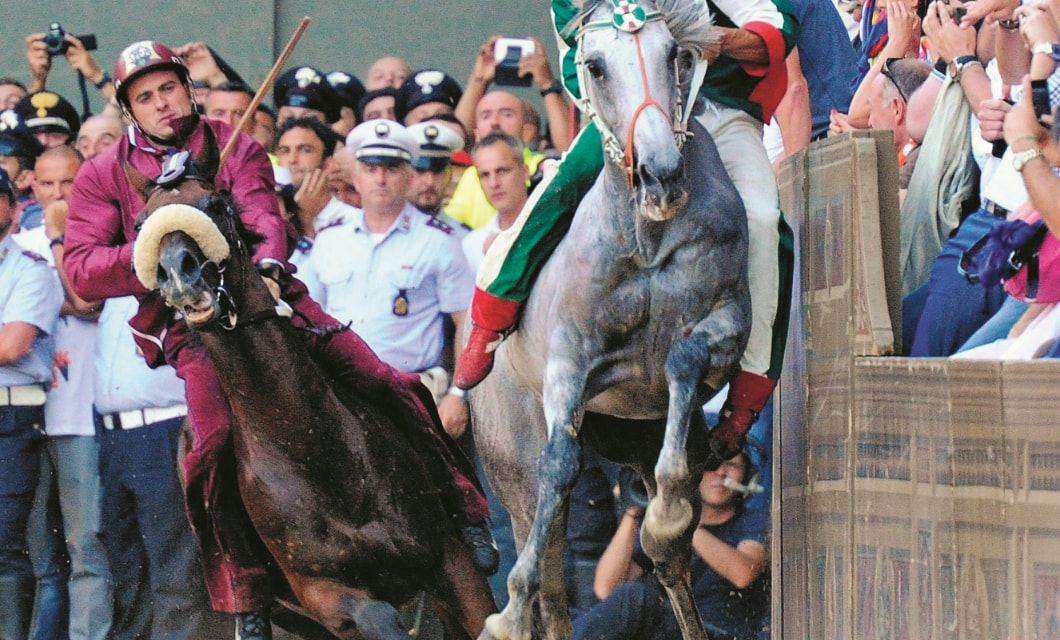 Almost nothing is forbidden at this unique event: jockeys are allowed to pull or shove the other riders, and even hit or hamper their rivals’ horses. Often, a few jockeys are thrown off their horses while making perilous turns; it is not unusual to see unmounted horses finishing the race without their jockeys which rightly signifies the essence of this game. 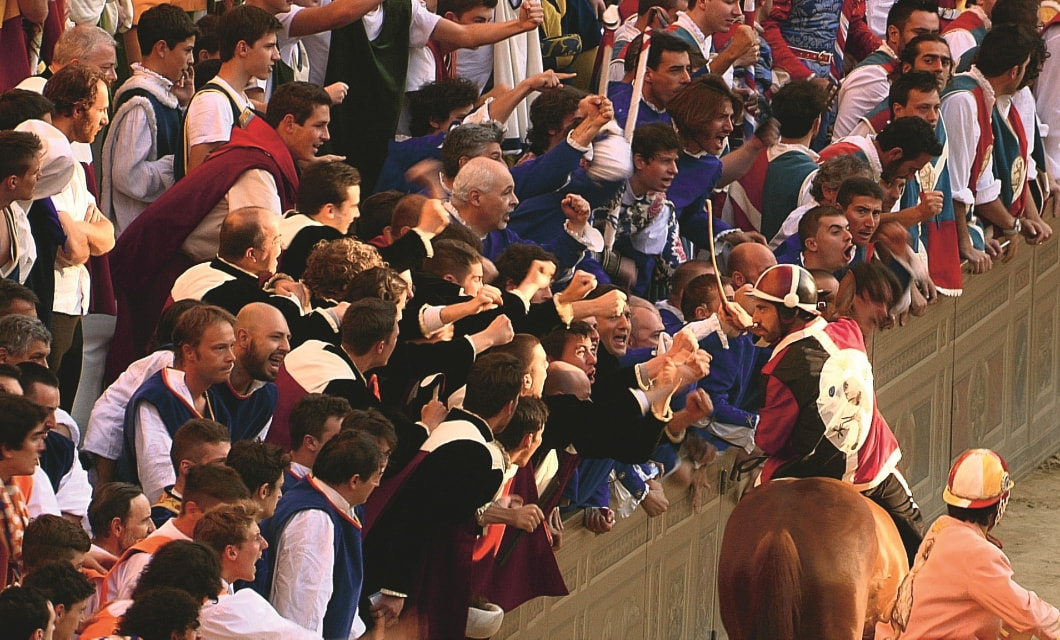 “I had never witnessed such true gratitude and faithful belief in the horses than I saw at the Palio,” said one of the spectators at the town square after watching the race. Horses that participate are not thoroughbreds. In fact, purebreds are forbidden from Palio. The defeat of a contrada is widely celebrated by its historical enemy as a victory of its own. 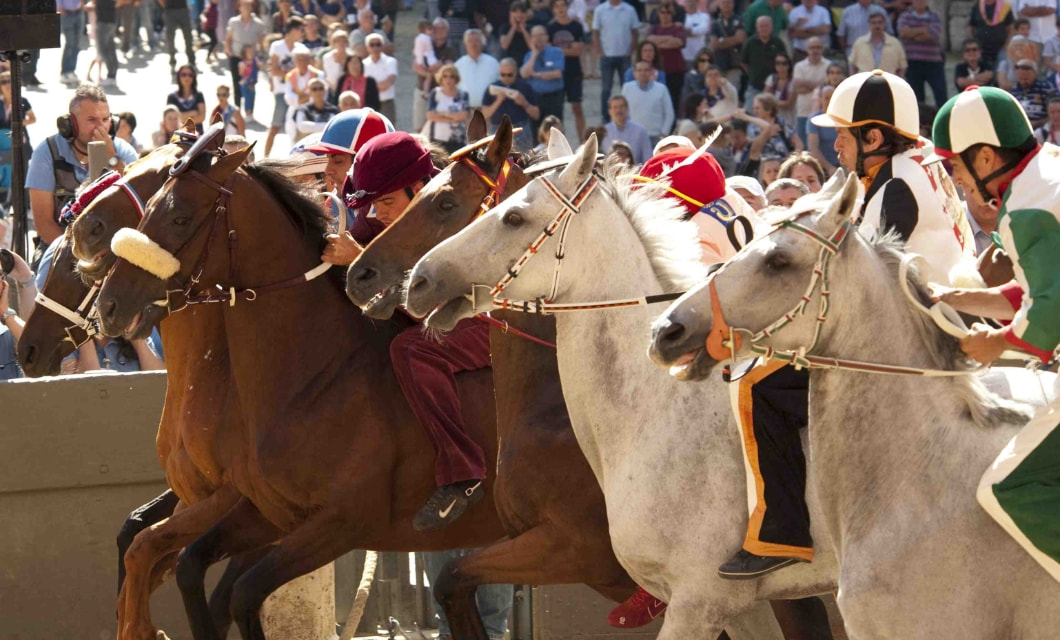 The Palio takes place over four days. Each of the contrade picks its own jockey but not the horse. A lottery system randomly pairs up the contrada with the horses. Sienese have a love/hate relationship with their jockeys. “If your jockey loses he might be doing it on purpose: he may have been paid off by a rival district to behave in a certain way and pocketed that money. The locals adore a jockey who wins but mistrust a jockey who loses. It is very hard for the jockeys- and yet they learn that manipulation is part of the game. And because they are paid a lot of money if they win, they accept the game. If a jockey ends up on a good horse and has a chance of winning, he will go for the win. But a jockey that ends up on a bad horse, may be tempted to ride not so much for the interests of the district hiring him, but for those of a district willing to pay him some good money,” says Spender. 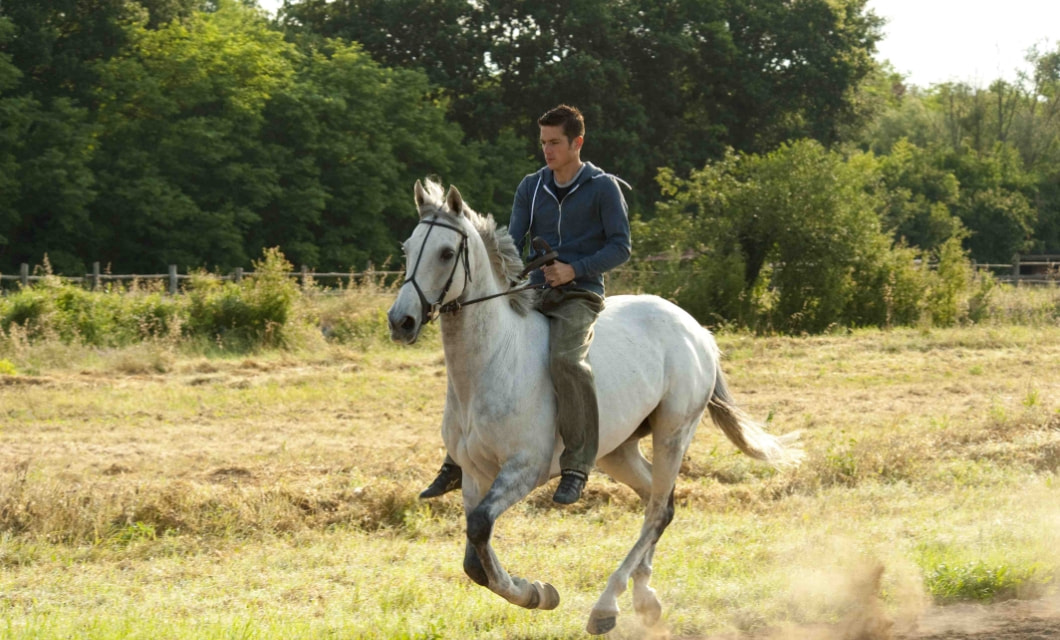 Palio is also known as a game of legitimate corruption. ”Everyone in Siena agrees that the whole point about the Palio is the machinations behind it. It is a ‘game’ not a sport- a bit like poker. It is a way for humans to try and manipulate the cards you are dealt by fate. And that’s what makes it fun--a game of cunning,” Spender further adds. This Italian horse race is as dramatically satisfying as the most crowd-pleasing scripted sports saga in the world.