Polo On The Rocks With Pablo Jauretche

“Polo is like a blessing for me”- Pablo Jauretche. Get to know him with LA POLO


Sharp 6:30 a.m on the clock, and before the horses, players and aspirant players start to walk down in the arena ground, a man of athletic look walks in the muddy ground with his casual shoes, regular jeans, white polo shirt, and a slip-on cap. Smiling as bright as the rising sun, his silletoute starkly resembled his persona. Pablo Jauretche, as the world knows him, is a former +8 handicap professional polo player from Argentina who took up coaching lately, came down to India, and specifically Jaipur. His motto for the visit was to deep root the concepts of polo among the Indian polo players and aspirant through a three-week camp session organised by the national governing body of polo in India, the Indian Polo Association. During his visit to the country, LA POLO interacted with him in a candid conversation, where he openly talked about polo, the sport in the country, it’s insightful concepts. In this process, LA POLO also captured some unsung interest with unfiltered side of Pablo Jauretche. 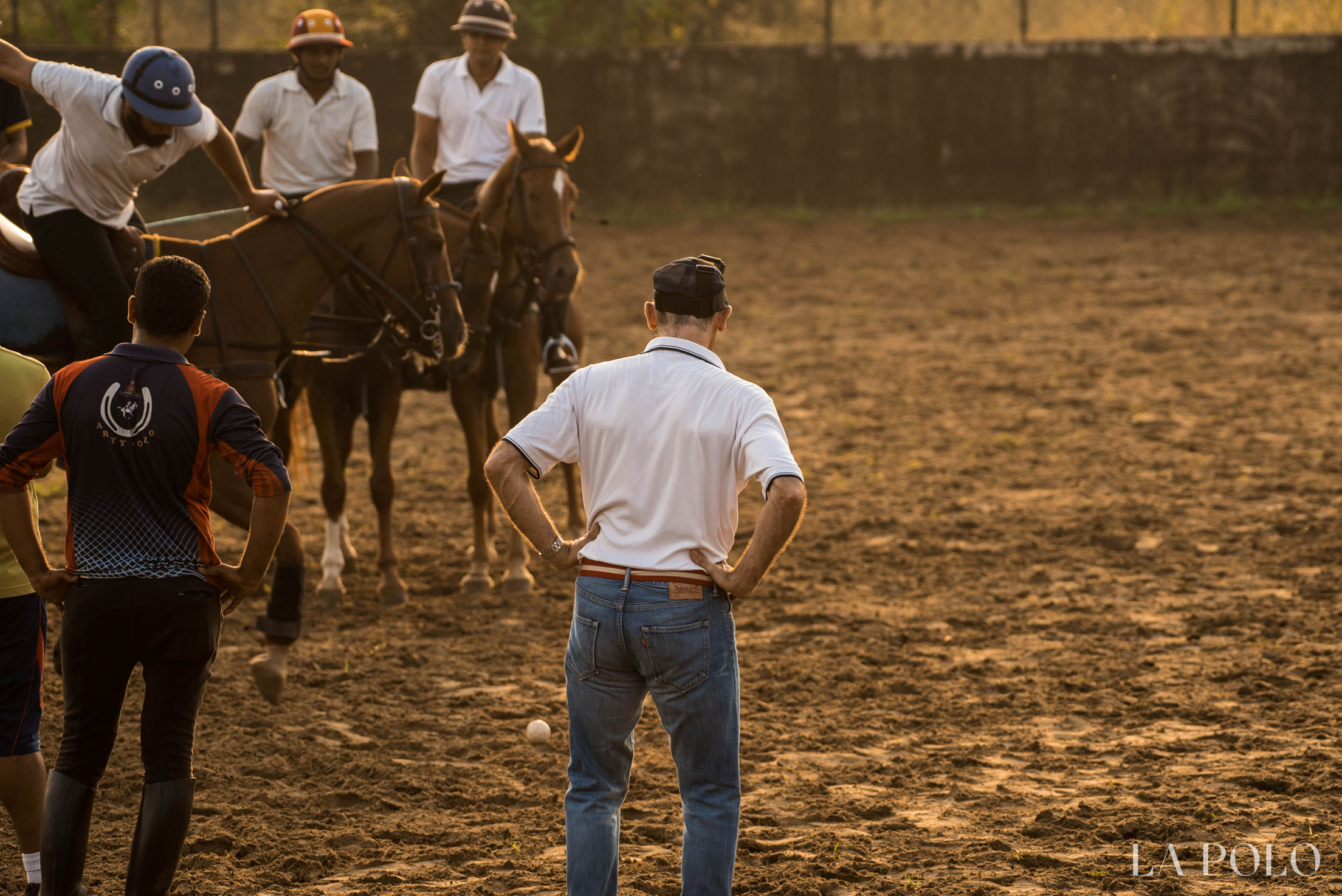 Read along on LA POLO to know the man of multiple talents who choose to remain humble and grounded.


LA POLO : So, Pablo Jauretche, a former +8 handicap professional polo player and now a certified coach. But, how did all of this start? How did Polo happen to you?

PABLO JAURETCHE : I started playing at my farm, mainly with my family as most of the Argentine’s do at a local polo club. I was about 13 and then I took it more seriously when I just finished university at 22 and then, sort-of, by-a-chance, I became a professional polo player.

PABLO JAURETCHE : I have been into polo for a long time, as long that I have played a total of 30 season already.


LA POLO : That’s a real long time. Being so many years into the game as a professional polo player and then as a coach, what has been that one moment when you felt that you have achieved it?

PABLO JAURETCHE : Mainly I would say, lately, in the last couple of 7 or 8 years. I started developing like a hunger of knowledge; and I had teachings with an old American guy. From there, I started to develop my way of teaching and everyday I am learning somehow.


LA POLO : Years as a player and now as a coach, what do you like more?

PABLO JAURETCHE : Actually I like them both and you can do both separately and on the other side they go together. I am happy with both professions. 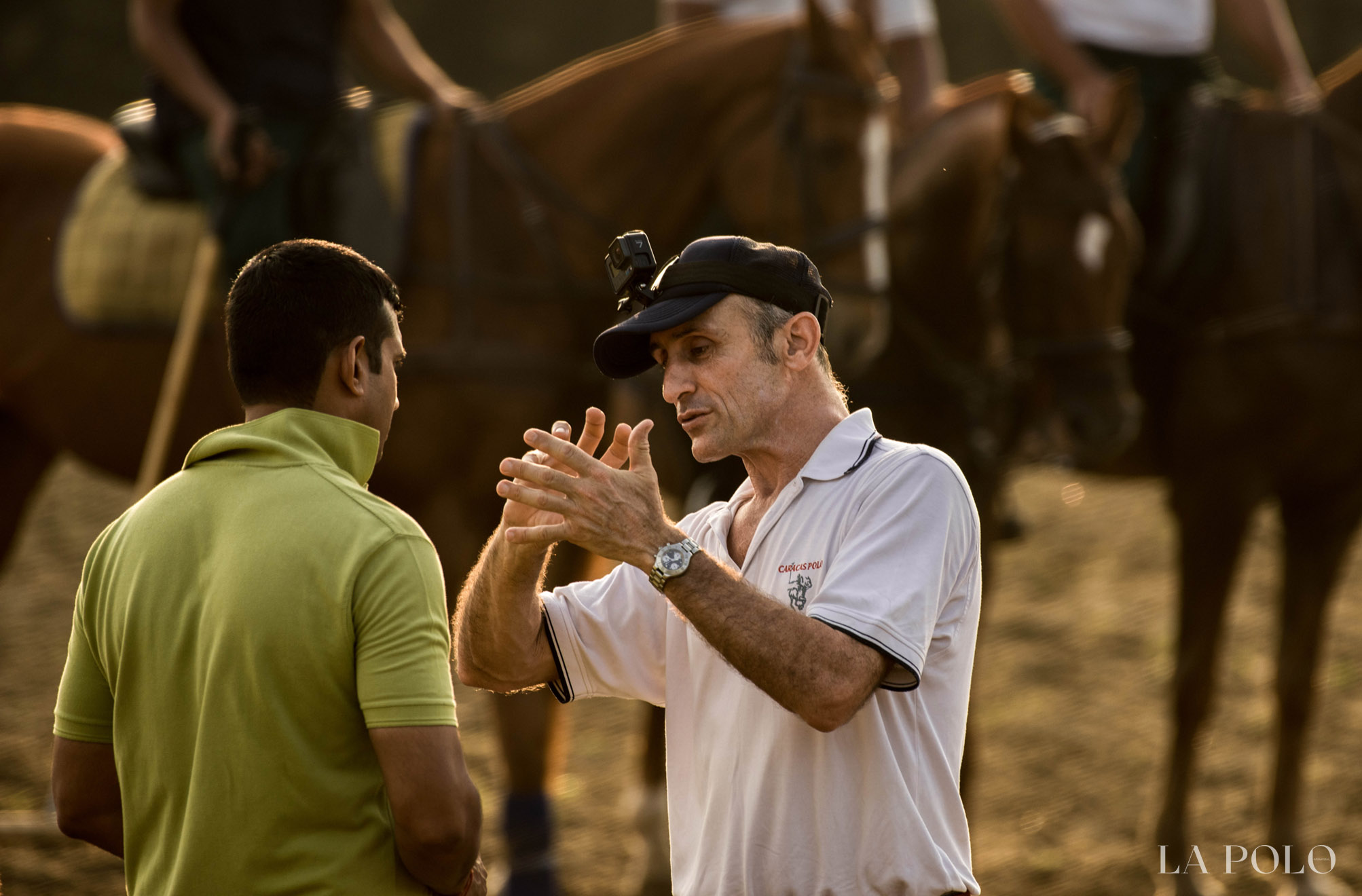 LA POLO : Your static determination towards the sport portrays that polo is more than just a profession for you. Is it more of passion?

PABLO JAURETCHE : Actually my passion is more on the horses side. And now lately I really get this passion of teaching that somehow is a learning passion because when you give you receive. And that’s what is challenging all the time. Sometimes you feel great when somebody has improved and sometimes you really feel down when you can’t achieve what you want to.


LA POLO : In all of this, how did India came on your chart?

PABLO JAURETCHE : I was always keen on India. In 1997, I got an operation on my wrist and I say, ‘This is the right time.’ And I came right after because I could not play polo for awhile. That’s how I came as a tourist and then somehow I ended up playing. A good friend of mine, Adhiraj Singh, I came across him and by chance I started playing that I should not have done because my wrist was still hurting (laughs). From then onwards, I kept on coming for many many other times - even as a tourist.


LA POLO : What is your most cherished memory here in India?

PABLO JAURETCHE : In the streets, mostly in Delhi, I had a couple of street children that I always come back to and we have such a laugh. I always remember the smile and that’s what makes me mostly attached to India.


LA POLO : Now that you have played in the country and been a coach to the player, what insight of the sport have you noticed about Polo In India?

PABLO JAURETCHE : There are some strong points- they are mainly all sportsmen, most of them are horsemen and they are very keen on progressing and everyone is challenging themselves. Somehow, there is a lack of horses, quality of horses and some of them are actually not bred for Polo. So everything gets more difficult from there onwards. Then I guess, there is a lack of technique in riding and also in the field that they play, the concept that they somehow did not get to learn. But I think, as soon as you get into the mechanism then somehow you be your own coach and correct when you are doing something wrong. So it is more to getting in the mind than on the hand. It’s more to get the knowledge of the right mechanics of the hits and also the right procedure on the horse. Executing as long as you understand, than you can always get better and progress. 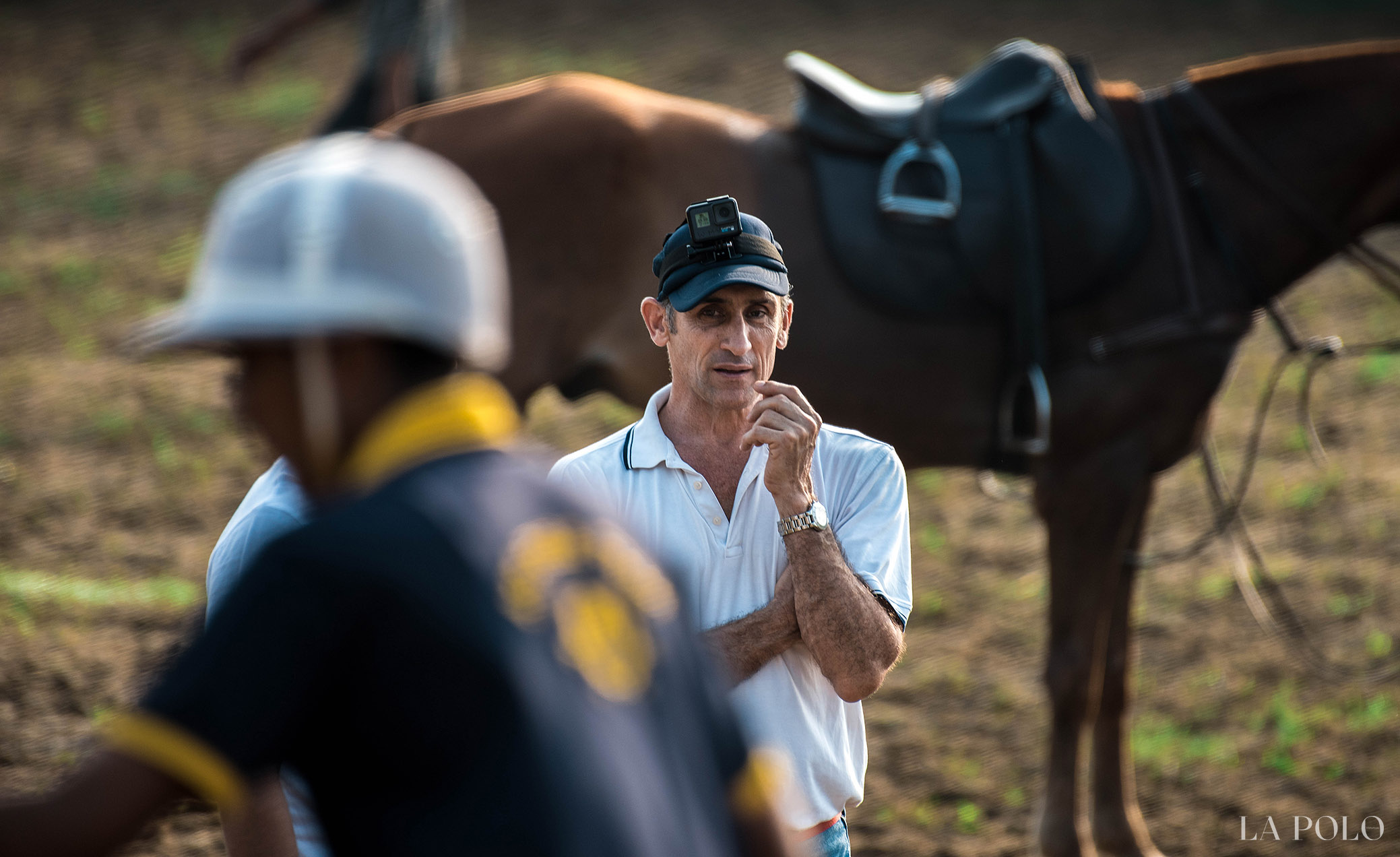 LA POLO : Keeping such a close eye on the player, you must have seen their play as well. Who is your favorite player here in India?

PABLO JAURETCHE : I have only seen them play once in a 6-goal tournament. I like Lt Col Vishal Chauhan (+4) very much. He is clever, he takes his time. He can see where his team-mates are. I like it.


LA POLO : If you had to compare the game here in India and back in Argentina, how would you draw the parallels?

PABLO JAURETCHE : The bandwidth in Argentina is different. First, the weather conditions, then you have horses and then you have the guys that start playing with the family and become a much better players. We don’t teach them. They just get on the polo field and then just copy and it becomes more natural and easier. Somehow, what you are missing in India is the horses level, and to improve you need to play better standard and somehow that’s different here because you need to start right from the beginning and so its random that they can get so much better. There so much limitation on the condition of the horses, fields and mostly the level of Polo is not that high. Even though I think Indians are basically good riders and good sportsmen. It’s just the lack of the horses, concepts and then the whole game. 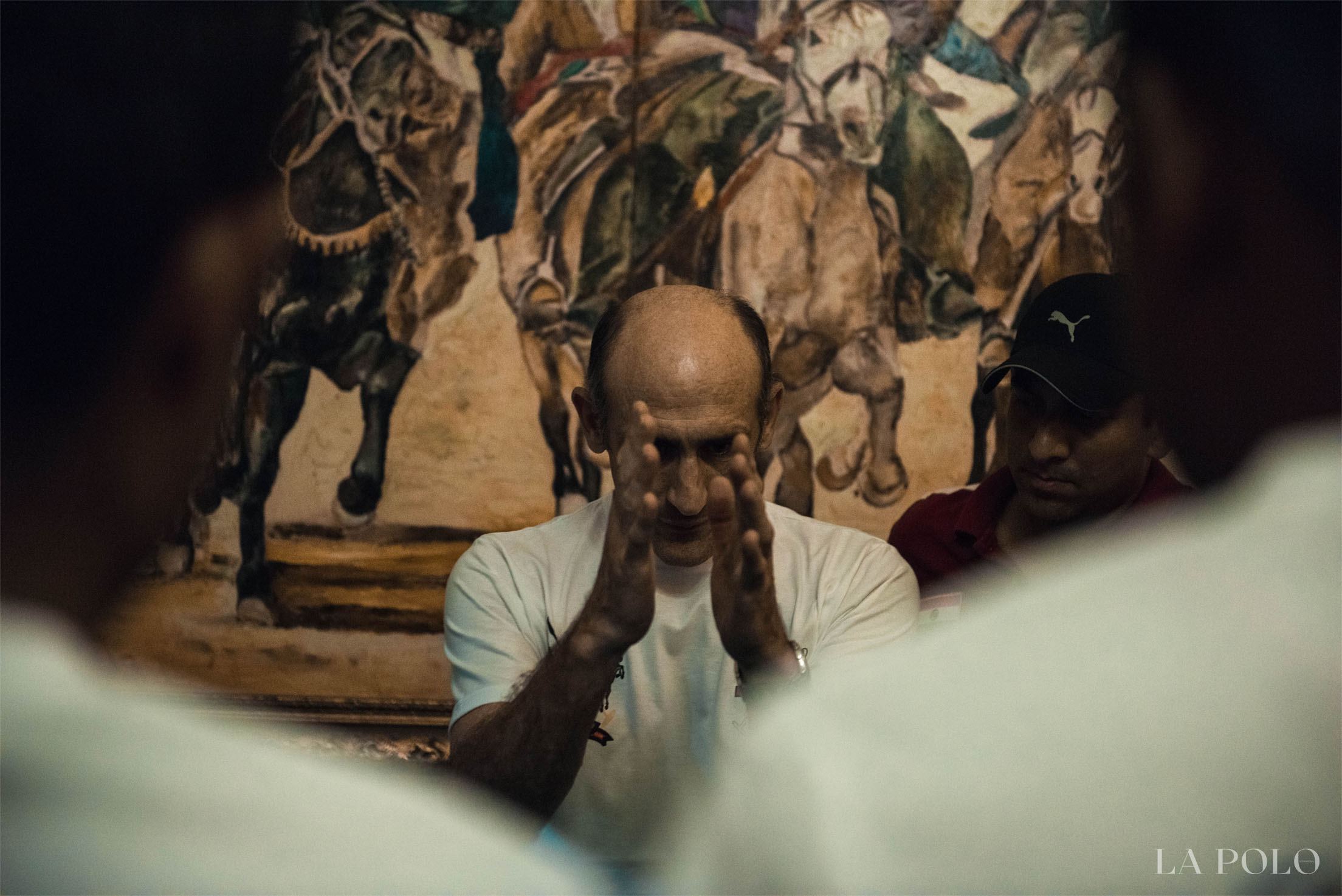 LA POLO : You mentioned how kids in Argentina start to play early. What according to you is the right age to start Polo?

PABLO JAURETCHE : In Argentina, the kids start hitting at 4, and that’s not necessary. You can also start at 12 or 14, rather than that. It will be still young. But yes, the sooner, the better.


LA POLO : What do you think is stopping the popularity of the sport worldwide?

PABLO JAURETCHE : Economy limitation. You need horses to play, then you need to maintain the horses, then you have to buy the sticks, (laughs and adds in his laughter), they are not cheap. So, basically that’s the main limitation that it has. But otherwise it is a really passionate sport.


LA POLO : All said and done, who is your favorite player from across the world?


LA POLO : What is your best memory from the world of Polo?

PABLO JAURETCHE : Playing the Opens- (taking a deep breathe and smiling instantly he continues) the speed, the surrounding, the whole set, the anticipation. You actually need to and you actually learn to think faster and that makes you a better player.

PABLO JAURETCHE : It’s a lively sport. It brings strong friendships. It makes you travel. It’s a good passport to the world. I felt it like a blessing to be a polo player. It is in fact, a blessing.