Polo Teaches You A Lot About Life


Polo Teaches You A Lot About Life - Naveen Jindal

Naveen Jindal, the polo player patron of Jindal Panther in a candid conversation with LA POLO.


Polo does not come with force, it is something that is built with time and gradually it becomes an addiction. To Naveen Jindal, polo had been this and more than that it has been a way of life for him. For 30 years, Naveen Jindal, the playing patron of Jindal Panther has had a life that has revolved around Polo. In a conversation with LA POLO, he says, “Polo has taught me a lot about life.” Read his complete interview on LA POLO and know his side of story where he talks about, Polo, life and spirit of the sport.


LA POLO - How would you describe Polo in three words?

LA POLO -Polo then and now…

Naveen Jindal - Well, I think people are more prepared now. People are putting more money into polo. The level of polo is much higher, in the sense that everyone has better horses, bigger horses and more horses. Mostly, players now also play thoroughbreds who are faster horses. But, Polo was fun then and polo is fun even now.

LA POLO -How do you choose your string of ponies?

Naveen Jindal - So I have always spent a lot of time in choosing the ponies I play. I have travelled all over the world to pick up my ponies. I have them from New Zealand, Argentina, France, UK, and in India from various places, from Pune, Mumbai, Kolkata, Chennai, and Punjab. So wherever I had the opportunity to buy young horses, like a year or two old, we picked them up. Because, with polo ponies you just get only half of them to be good for becoming the ponies. You just have to be lucky when it comes to that. So to answer your question, from wherever. As sometimes you might get a good horse from New Zealand, or Australia, or Argentina or the UK and sometimes, your neighbour, sometimes from your fellow polo players, so it just depends. 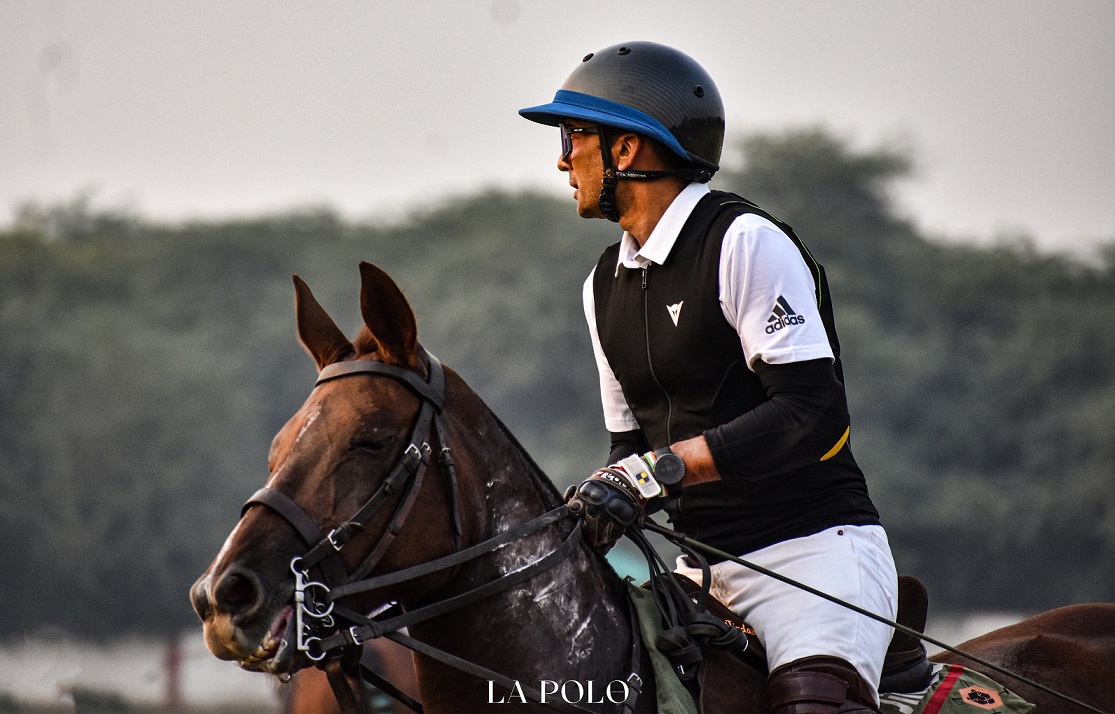 LA POLO -Who among all of your polo ponies has been your favourite?

Naveen Jindal - There was this polo pony that we had brought from Delhi Race Course. Her name was, Rukmini and I think her name was Crown Queen when she was a racing horse. She was a phenomenal horse. And now currently, what I have is this mare called Pataka. She is amazing. She is a black color mare with a white blaze on her face. She is very good and she has a big heart. She runs very fast and can easily bump into opponent horse. With her top pace, sometimes it becomes difficult for me to stop her because when she runs that fast it isn't easy. But I love that horse. She is very good to hit a ball from. Then, I have many other ponies as well. There is Kapa, Salada, and I just bought some new horses so they are still in the process and I hope they come out good.

LA POLO - You have been in Polo for a long time. Do you have plans to take the game to more people?

Naveen Jindal - So we have a facility on the banks of Yamuna, very close to Delhi. There we encourage young players to come in and play. We have a total of three grounds therein. Polo, basically needs a lot of space, lot of space to practice, lot of space for your horses and stables and then you need a lot of people who can take care of the horses. And then, you have to have lot of people to play with, because you need to have the right organization where everyone comes along. We have this place which has become a lot popular, it is called the Jindal Polo Ground. It has a condusive environment, where everyone can come, play and enjoy and also improve the level of polo. This is how we are trying to improve.

LA POLO - Your son has joined Polo recently. How do you feel about it?

Naveen Jindal - Well that is totally his choice. But this is in a way good because with this I get to do some fun with him. Otherwise, it just business, but when you play with your son, it creates a better bond. I also wanted him to take to shooting but he wasn't interested. He took Polo and I am happy about it. 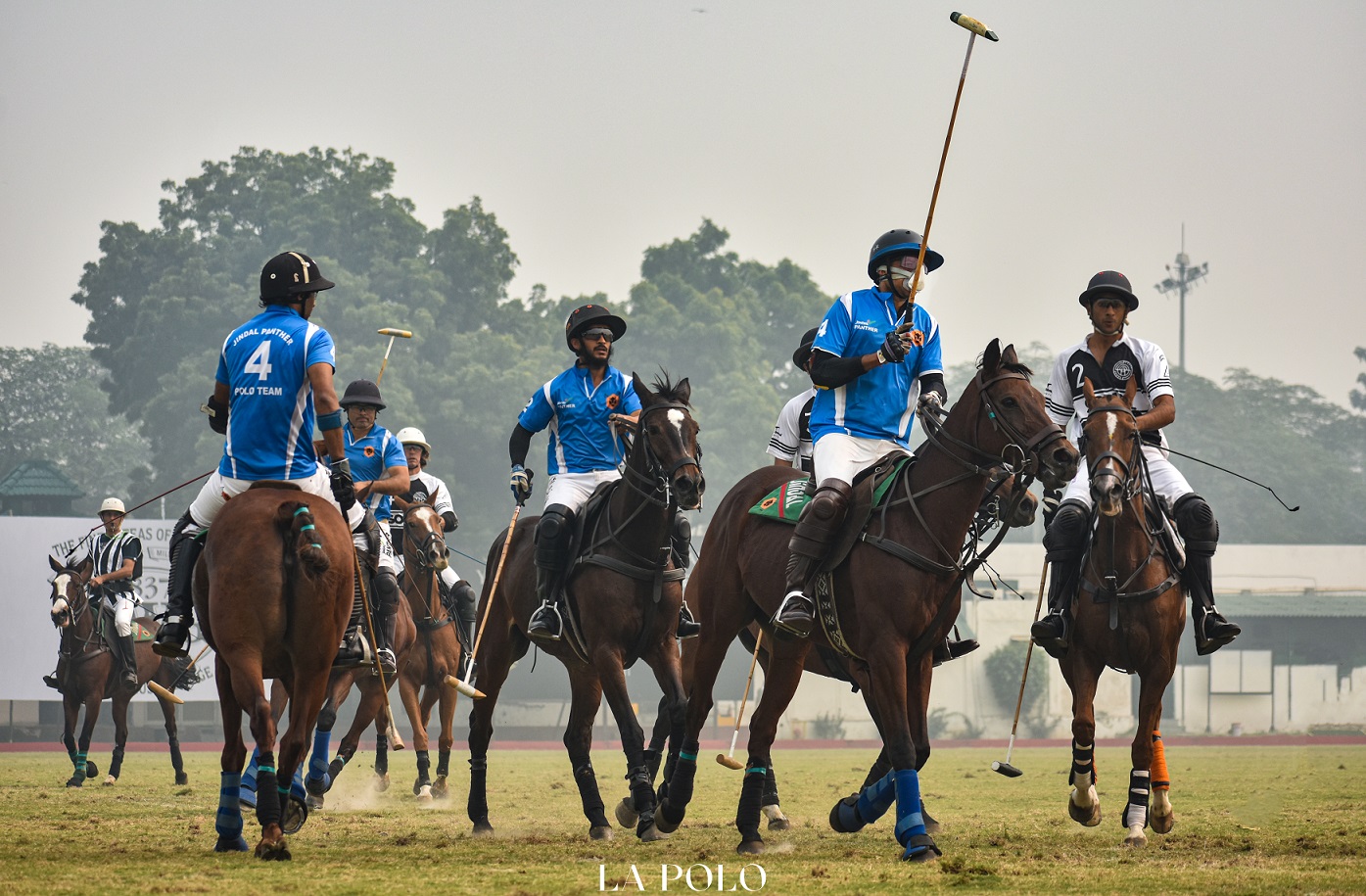 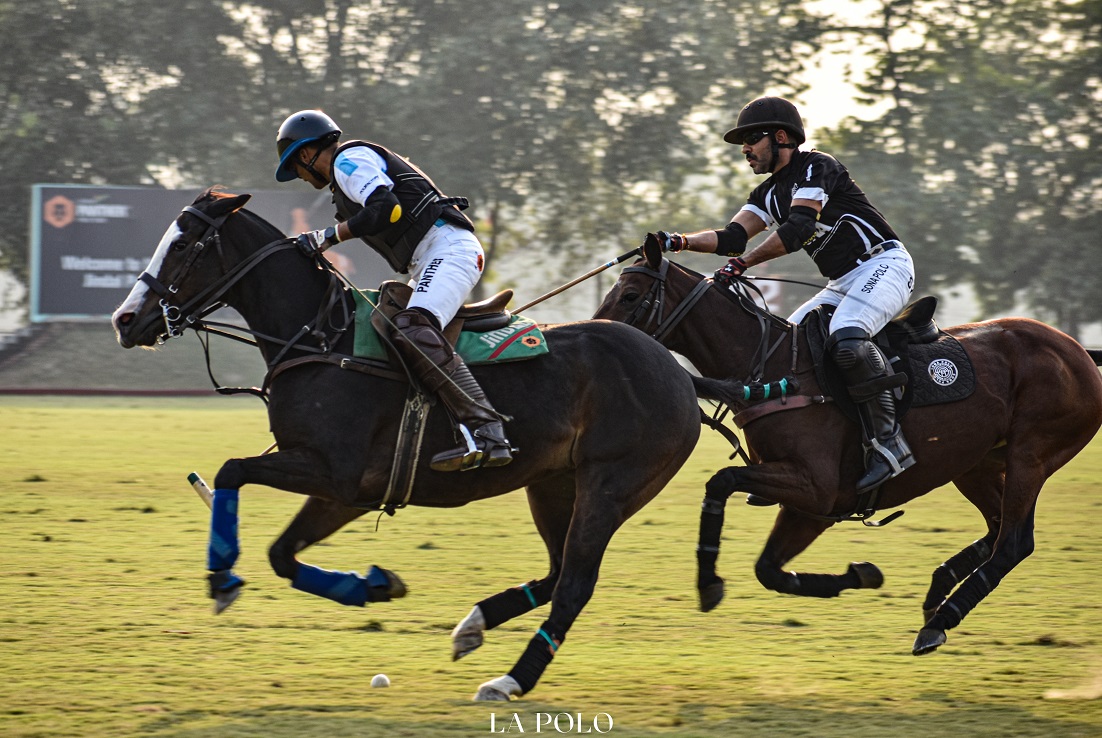 LA POLO - Ten years down the line how do you see Polo in the country?

Naveen Jindal - Ten years down the line, I feel Polo has a bright future in the country. Modern Polo, as we all know was originated in the country's eastern region, in Manipur. It is India's gift to the world. It was here that British tea planters discovered people playing polo. I feel that it is our responsibility that we have to encourage this sport. India has produced many great players like Hanut Singh, then the Patiala players, then players from Jodhpur, then Maharaja of Jaipur and even today, we have got some great young players to whom if we give the right atmosphere, they can be as good as any other player in the world.

LA POLO -Over the years, do you think that role of a patron has changed?

Naveen Jindal - Role of a patron, well I am not sure. The role of the patron even earlier was to encourage the team and the players, the sport, to get together and play. Because if you play, you remain enclosed with the sport. One is just sponsoring something and one is to be actively participate in it. So I feel that the concept of patron is very popular here in India and in other countries like USA, UK or Argentina. Every player in Polo, who get a handicap and if you play higher than your handicap then you become an asset for the team. Even as an amateur, I play the highest level of polo in the country. That's amazing about the sport.

LA POLO - Does an emotional baggage comes along with being a Playing patron?

Naveen Jindal - I would not say that, but yes, people tell me that even though sometimes we have an opportunity of making a better chance of making a team with a better player. But when I play, our team has performed better. As the caption of the team, I try that our players do not become solo players and be team players, do their bit and take other players along. So, when I am playing, we perform as a team.

LA POLO - How do you handle a bad day at Polo?

Naveen Jindal - So we have won so many games and lost so many of them that now, winning and losing does not actually matters. It used to matter before, much more that it matters now. I am now much more happy when we come out of the field with all of us in one piece with all players and horses good with no injures. I just thank God that he has made it able for us to play the sport. I have always believed that you need to be lucky to have played the sport and just for playing the sport itself, God has to really really kind on you. Everything has to be right. I have been playing the sport for 30 years now and I just love every bit of the sport. 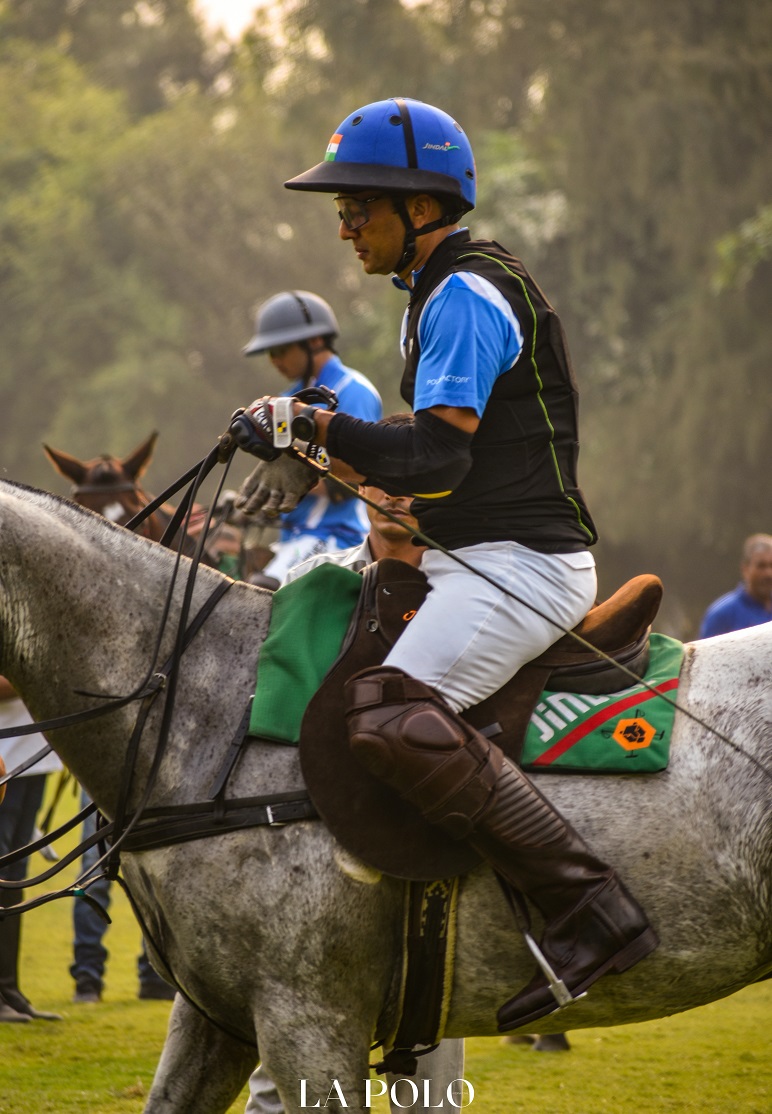 LA POLO -Well 30 years is a long time, how did you start playing Polo?

Naveen Jindal - I was always find of Horse riding so I joined the President's Estate Polo Club and there I used to see people playing Polo and then it was there that I tried hitting the ball over a horse. It was a great feeling to hit the ball over a galloping horse. And then, obviously I had gotten bitten by the Polo bug and then I bought my first Polo horse, then second, third and so on. Slowly, I built up the string of horses for myself. Later,when I head towards business, I thought of having our own Polo team,we call it Jindal Steel and Power Polo team and Panther is our brand and so also, Jindal Panther Polo team.

LA POLO -So, you made your debut with your own Polo team as a Patron or as an individual?

Naveen Jindal - Earlier, I used to play wherever I got the opportunity. So I have never been a professional polo player, I have always been an amateur. I have always loved the sport and the sport has given me a lot. From teaching me to be a team player, to work hard, to keep me fit, to strategize and to not give up. Because, sometimes a small mistake made in the last seconds can make you lose the game and sometimes, the things done right in the last second can make you win the match. This game and for that matter any game, teaches you that sometimes you may do everything right but the result is not right. And sometimes, your hard work pays off. So, it teaches you that winning and losing is not in your hand. You just have to do your bit. You just do it, enjoy every bit of it and leave the rest to God.

LA POLO -How is Polo different?

Naveen Jindal - I hold a National Level Record in shooting but in games like those, you make one small mistake and you are out. But Polo, it gives you many opportunities. It's a game that lasts for six chukkers and in those 1.5 hours it will be multiple opportunities. That's what I love about the sport. Polo is like life, it gives you multiple chances. It's not like you do one thing wrong and you are out. No. It would give you chances so that you can improve and make the right move. 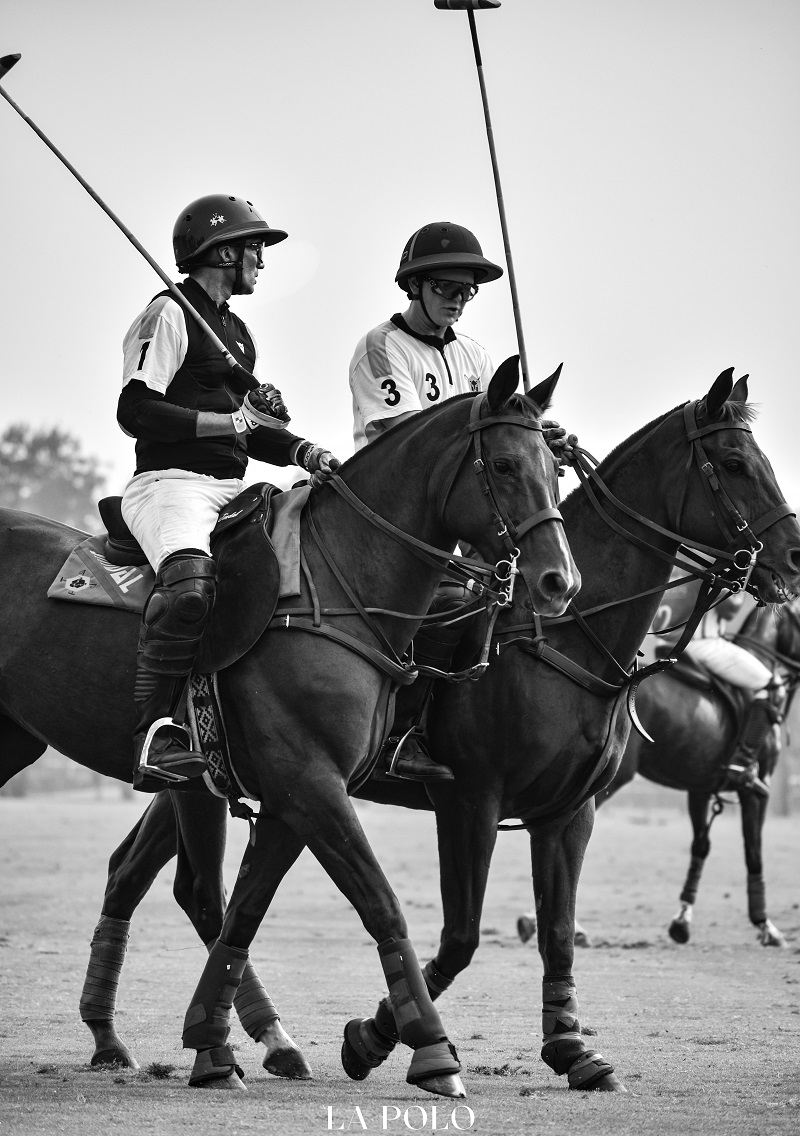 LA POLO -Does Polo help you to make choices on business front as well?

Naveen Jindal - Not exactly. But what we do here, it does gives me the courage to take chances. You have to be bold to play horses and their are a lot of uncertainties. And at the end of the day, you are riding a horse and it can make unpredictable moves. And just because you are a chairman of a company, the horse is not going to respect you. The horse is only going to respect a good rider. So here it teaches me that in life too, people are not going to respect me just because I am a chairman of a company. People respect you if you are good and if you are hardworking. Sometimes you see that, a player is great as a solo player and is brilliant in his own but they don't win. And then, there are average players who involve with other players and have better results. So you have to be a team player and you have to take everyone along.

LA POLO - How do you take out time for Polo from your tight schedule?

Naveen Jindal - So, at times, I take plan out things which are most important. So Polo is something I plan for. Let's say, Polo happens from October to February in India and I only play here in the country that too mostin Delhi and sometimes in Jaipur. So, for me, even though my business comes first but Polo is my first love. But yes, then I also have to keep my priorities right and my priorities are my business. But then we exercise, and Polo is like an exercise for me, because when you play Polo, nothing else comes to your mind. And at that time nothing else matters.