A Quick Rewind Of The Kolkata Polo Season


If polo is India’s gift to the world, then Kolkata is the platter on which it was presented. Being the proud owner of the world’s oldest functional polo ground, Kolkata, like a guardian, has seen the sport growing and taking the shape it is in today. From a tribal sport of Manipur to becoming the Game of Kings, Kolkata has seen the progression and has been an important part of the story during this transition. A story which not only has amazing highs but also some agonizing lows. One such low was during the last couple of years when the regular season didn’t take place in this city of joy, but with determined Eastern Zone of IPA backing it with full support, the year 2019 once again witnessed players on flat out gallop chasing the ball in the backdrop of mesmerizing Victoria Memorial.


This year in Dec 2019, Eastern Command has ensured successfully revival of the sport in this historic and fabled venue. The Kolkata Polo season 2019 was organised at Pat Williamson Polo ground from 17th Dec to 25th Dec. The event was well received by army and civil crowd alike. This time the city had Indian Military Academy, National Defence Academy, 61 Cav, ASC, RVC and Artillery teams bringing Kolkata polo scene back to life. With profusion of big names like Col Ravi Rathore, Lt Col Vishal Chauhan, Naveen Singh, Lt Col Samantaray and many more, the Polo enthusiasts of the city witnessed some of the best players of the country battling it out for the four coveted polo trophies, namely ‘ Fort William Polo Cup’, ‘ Rising Sun Polo Cup’, ‘Army Commander Polo Cup’, and ‘Eastern Command Centenary Polo Cup’. Out of these four cups, the Fort William Cup was organised with an exclusive aim of shaping up the future players of the sport. Consequently, it was played between Cadets of Gentleman Cadets of IMA. With the quality of polo displayed by both the academy teams, city’s polo fraternity was pleased to observe that the future of Polo is in secure hands. Undoubtedly, the lion’s share of the credit goes to the Equitation Officers of the academies, namely Lt Col R Dagar of NDA and Lt Col PK Bagul of IMA. 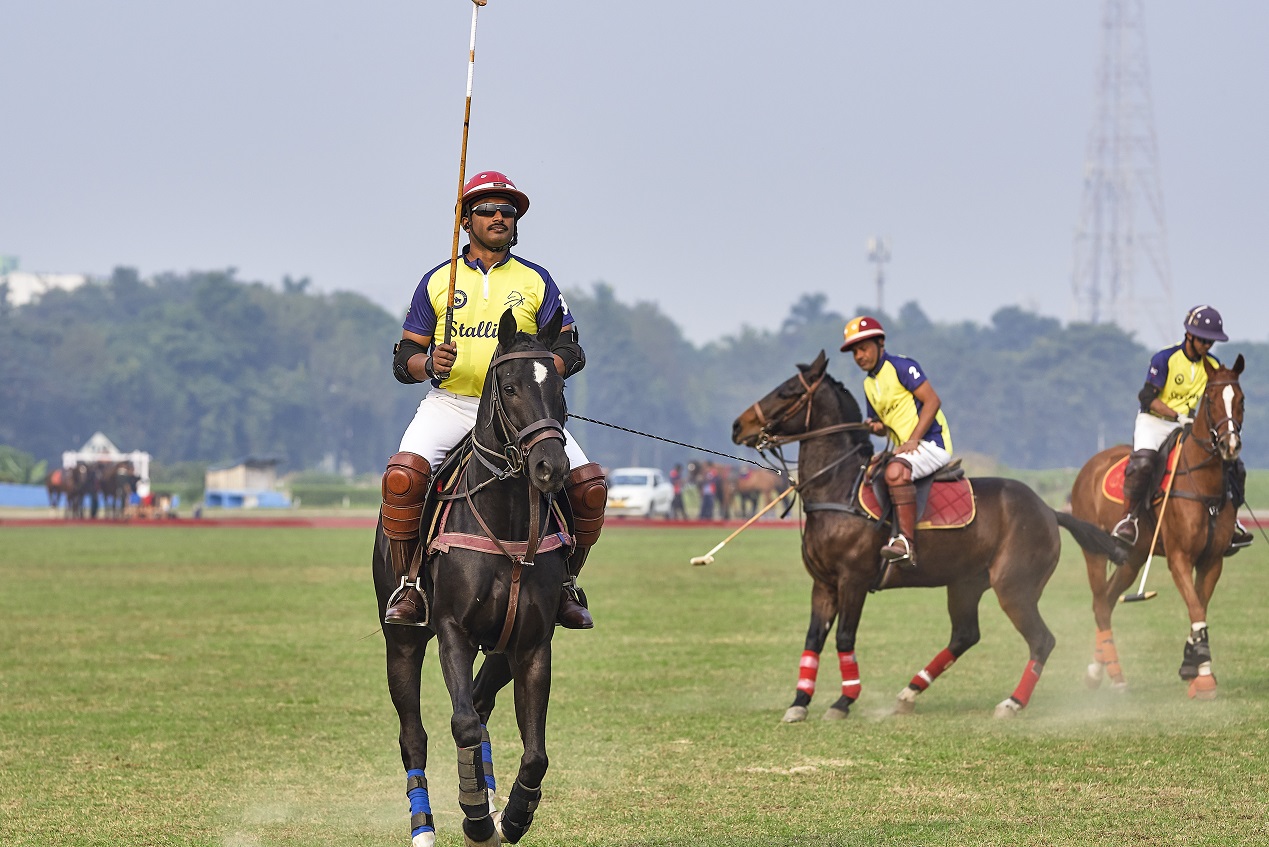 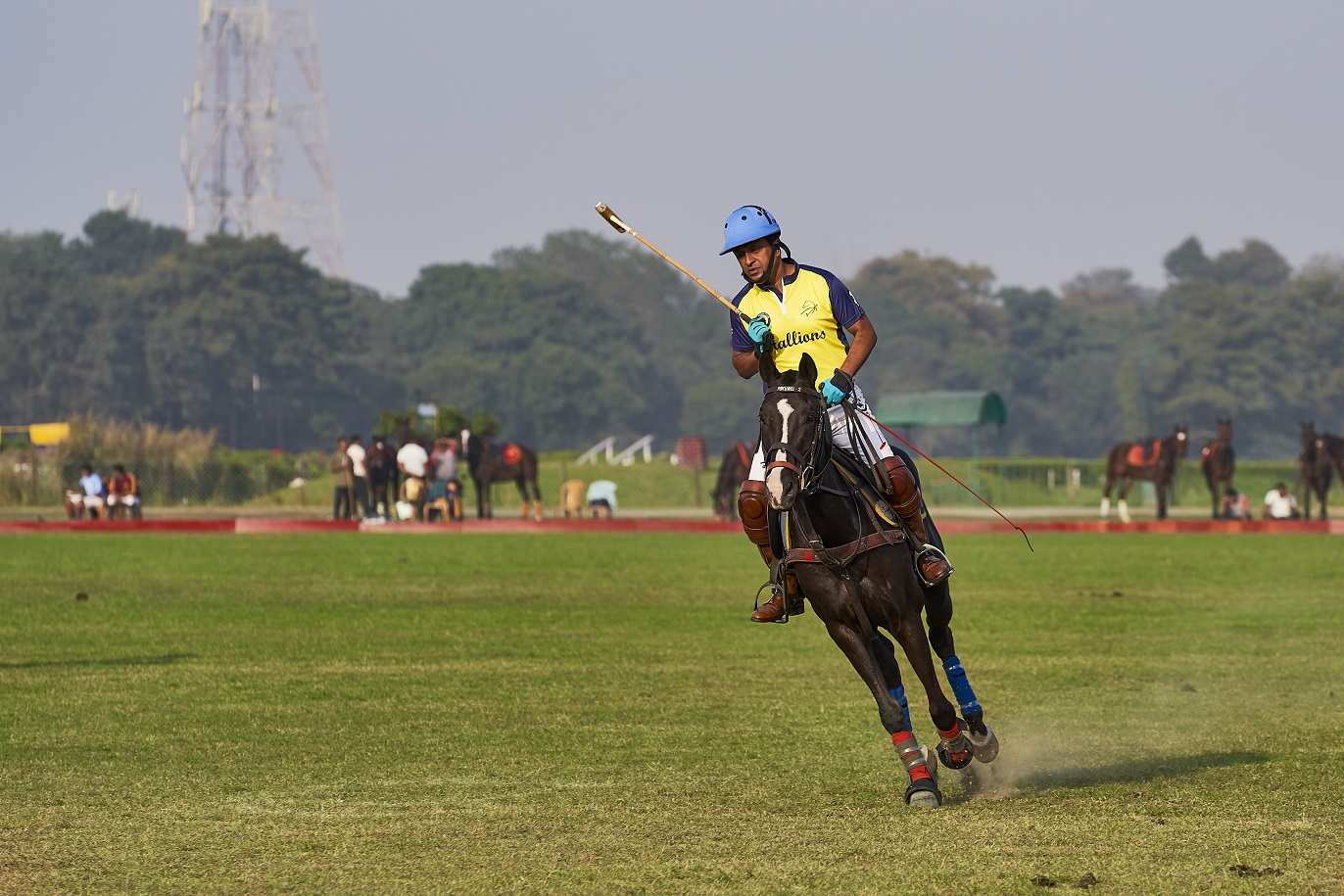 Finals of the second tournament, the “Rising Sun Polo Cup " was played between ASC and 61 CAV on 19 Dec. It was an exciting match with both teams playing a see saw battle poised on razor sharp edge with half a goal difference. Till the dying moments, it kept the spectators on the edge of their chairs. Finally, ASC emerged as winner during the last minute of the last chakkar by scoring the winning goal there by claiming the tourney. The final score was 6.5 to 6 in favour of ASC.

ARMY CDR CUP (6 goals) was played from 21st to 23rd Dec. Considering the higher level of game, Arty and RVC polo teams combined to field one single team with the help of 2 left over players of 61 Cav. Thus, the tournament was contested by three high caliber teams. With Col Ravi Rathore, the captain of Indian Polo Team and a 5 goaler coming in to reinforce, 61 Cav easily became the tournament’s favorite. Finals was again played between ASC and 61 Cav. But this time 61 Cav displayed an exceptional performance there by living up to the spectator’s expectations of being the favorite. 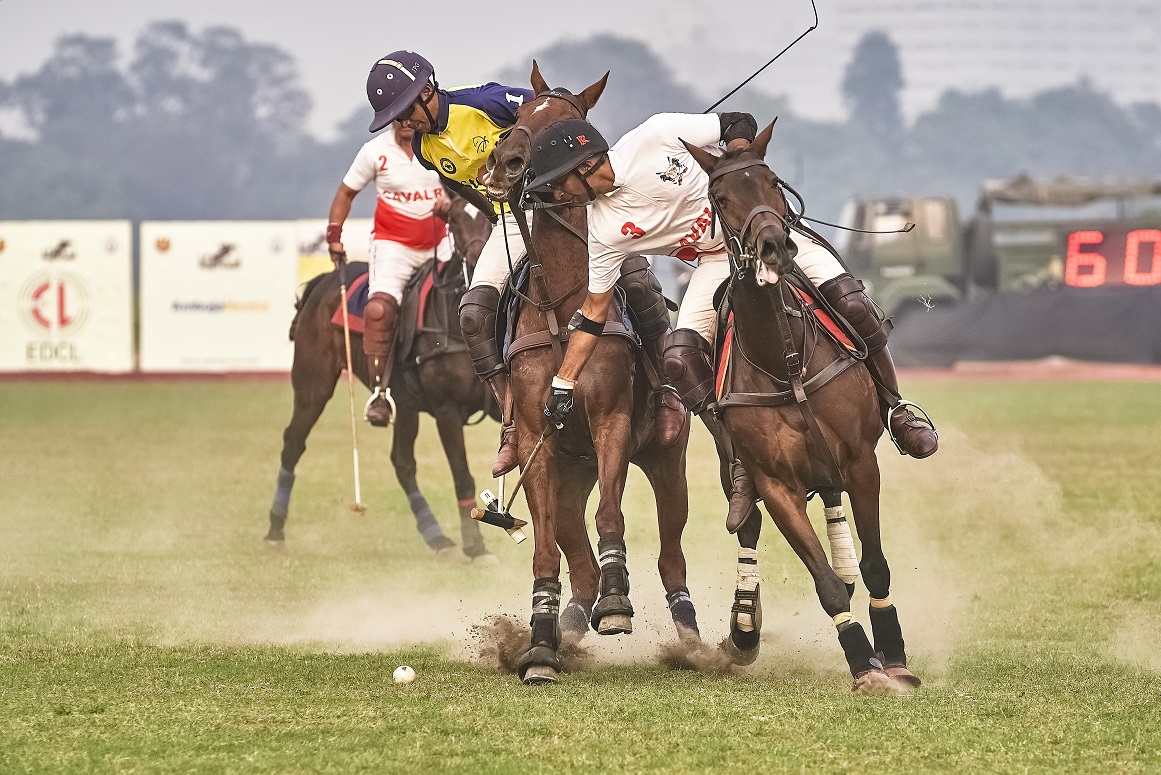 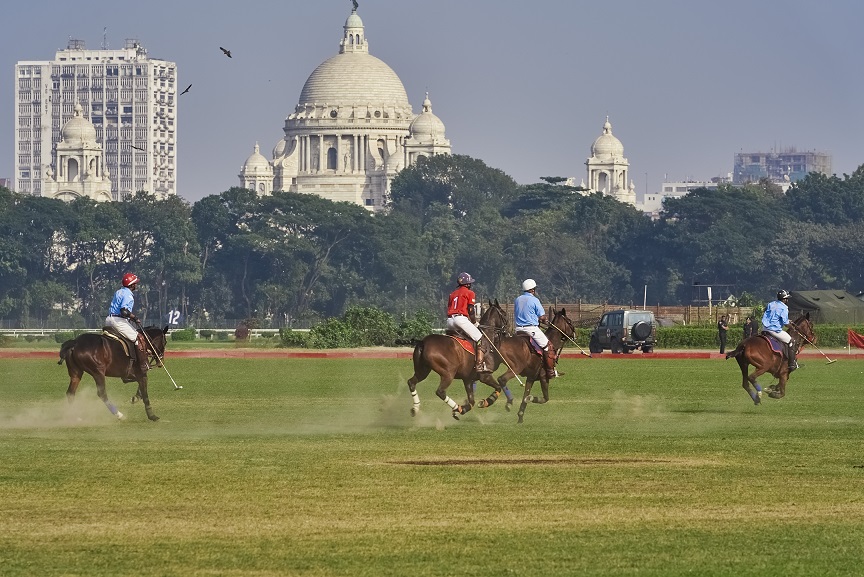 The last and final " Eastern Command Centenary Polo Cup" was the perfect culmination of the polo week at the station. With an aim to present the top-quality polo, two teams, namely Fort William and Riding Sun were made from all the high handicap players participating in the season. Fort William was captained by Col Ravi Rathore and Rising Sun was steered by Lt Col Vishal Chauhan. Supporting Ravi, the Fort William team has Col JS Shekhawat from Artillery, Mr Naveen, and Maj Aman of 61st Cav. On the other hand, Gunner Lt Col Samantaray, Dafedaar Vjay of RVC and Maj Prithvi S Rathore of ASC combined with Lt Col Vishal. The game was an exciting one and these top players enlivened the historical venue with their silken grace. Kolkata polo enthusiasts witnessed some high-quality polo and cherished the same to the hilt. Though both the teams played well but eventually Ravi's experience got better of Vishal's explosive talent and the cheering crowd witnessed Fort William team lifting the imposing “Eastern Command Centenary Polo Cup”. 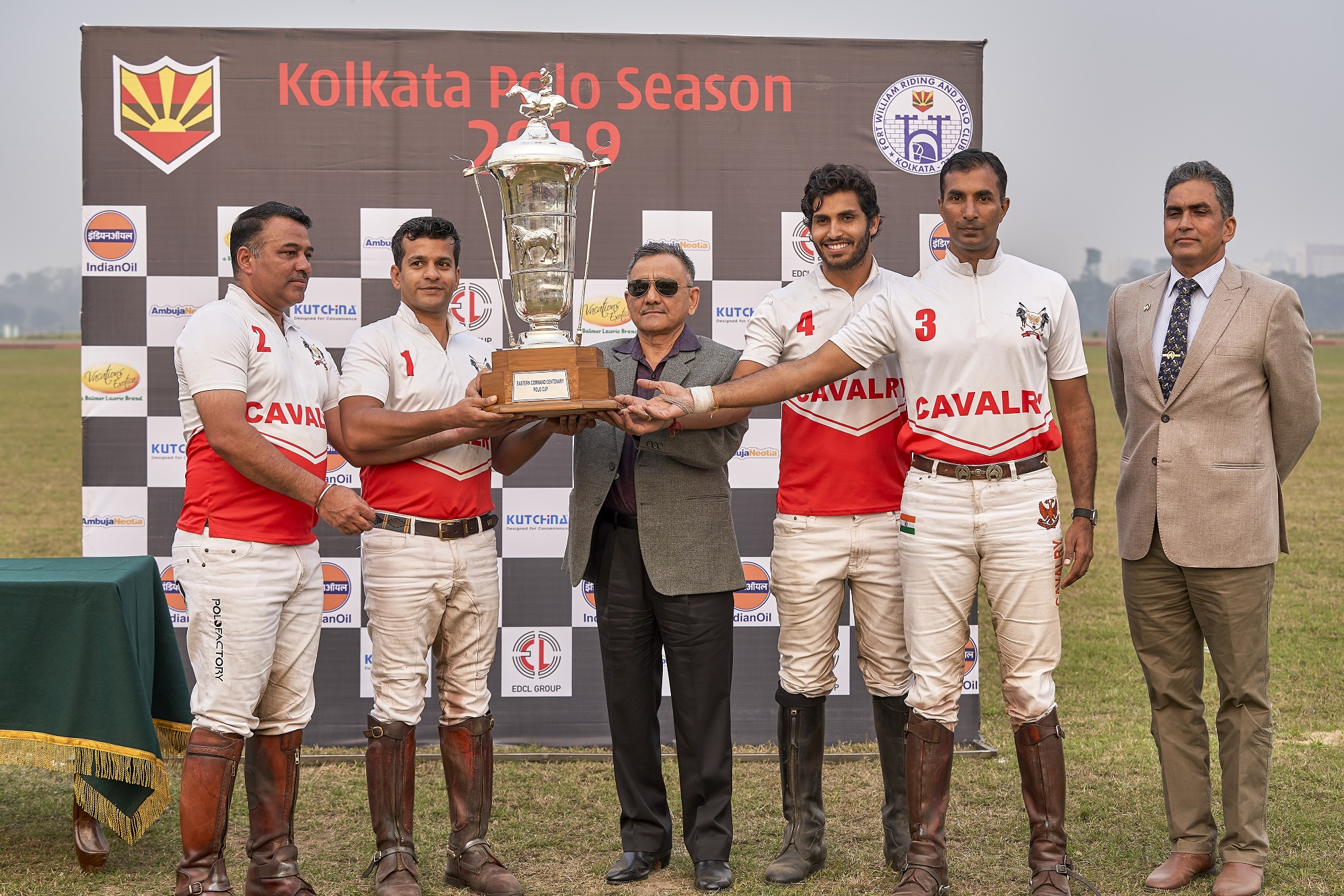 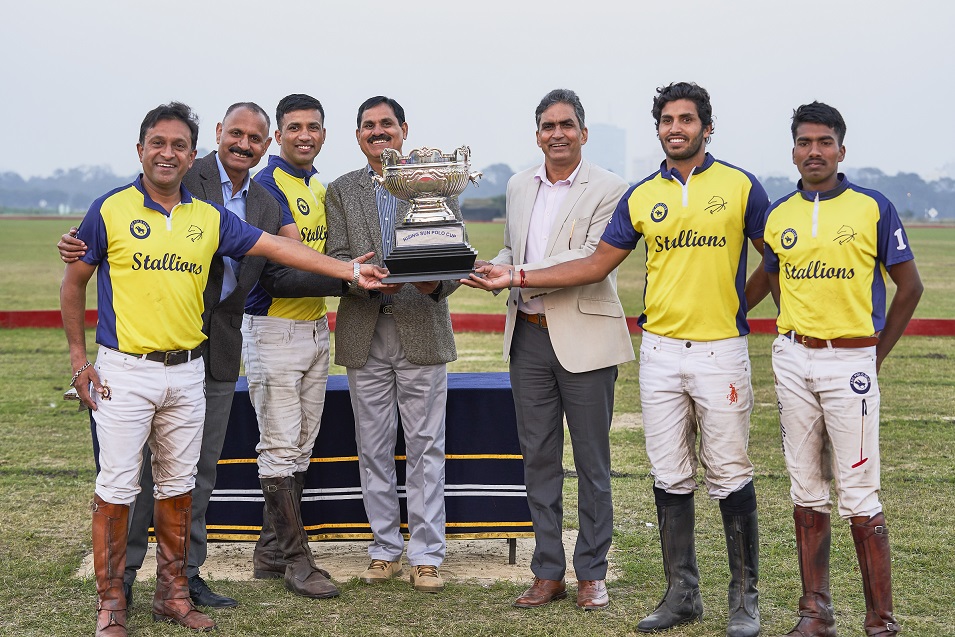