The finals of RMRM Gold Vase 2018 had Rajnigandha Achievers and Jindal Panther battling for the trophy. The match took place at Jaipur Polo Ground at 3:00 pm. The team composition for today’s match was:

The match started with Rajnigandha Achievers getting a lead of 0.5 as the total handicap was 7 instead of 8-goal, thus , according to the rules of the game, the team was granted this lead. The game came into action when businessman, Mr. Robby Mohan, great-grandchild of Mr. Rajinder Mohan threw in the ball. As soon as the first chukker began, both the teams dwelled into the final battle, but taking hold of the ball, Matthew Perry douched away from the competitive team and attempted the first goal of the match in favour of Rajnigandha Achievers. After this quick goal, the opponent team, Jindal Panther got into action. Tom Brodie tried to handle the ball with his mallet and stopping after a little work on the ground, passed the ball swiftly to Simran Shergill, who stroke a long shot but was not complimented by his team players. Thus, losing the grip from the ball, Jindal Panther lost a chance to score a goal but this came as a favour for Rajnigandha Achievers. As soon as Jindal Panther lost the grip, it was Vandit Golechha, a young player of just 18 who took the ball all through the ground and attempted a beautiful shot. The audience applauded in thrill and excitement. By now the opponent team had started to feel the pressure as the first two goals were made by Rajnigandha Achievers. Nevertheless, coming back into the game, Simran Shergill hit the ball passing it towards Tom which was attacked by Matthew Perry. Rescuing the ball, Tom passed it with back hand to Simran, who tried to move the ball but missed it by a little chance. Hurr Ali came in just then and getting the hold of the ball did a brilliant play as he took the ball all by himself to the goal post and he hit the ball between then that came out as a clear shot. The score by the end of this chukker remained at Rajnigandha Achievers 3.5, and Jindal Panther 0. 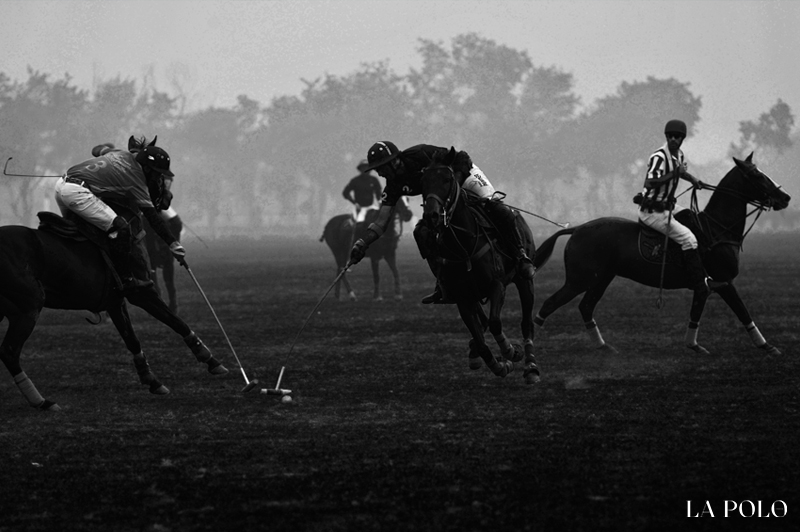 The second chukker came into action and by now Jindal Panther was in a lot of pressure as the scoreboard read a nil for them. Defending the other team thus, Simran Shergill passed the ball to Tom with a powerful back hand shot, to which Tom complimented and hit across the goal post. The supporters of the team and especially the groomers cheered in excitement as the team achieved their first goal. But as if the joy was short-lived the team did not witnessed any further achievement during the chukker. There were a number of times when Simran missed the ball, it seemed as if the day was not in favour of the player and the team. As he missed the ball, Matthew Perry hit the ball towards Vandit, who took it forward to achieve another goal for the team. With this the chukker wrapped at 4.5-1 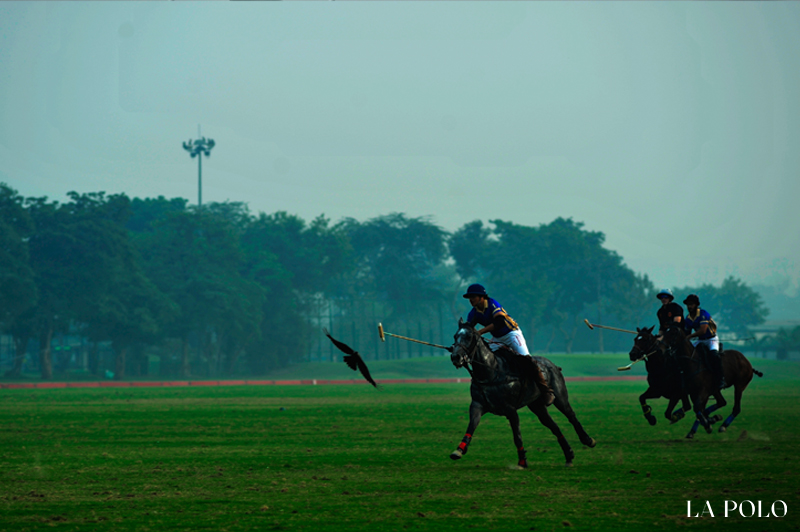 The match followed into the third chukker after the half-time break. As the game started, Simran Shergill came in spirit. He chased the ball from the opponent team to take it towards the goal post, he was constantly followed by Matthew Perry in full speed, but Simran hit the ball forward towards the goal post and when everyone thought it was a goal for the Jindal Panther there came in a disappointment as the flag gave a wide. Simran missed the goal by just a few inches. But this surely was not a good or safe move when the team was already lagging behind. Nevertheless the opponent team was rejoiced to which Matthew took a chance to get the ball, he passed it through the ground but when was caught up in a defensive attack by Tom, he had no choice but to pass it to Vandit. In a hustle where Vandit was followed by Simran, Vandit passed the ball to Hurr, who stretched the ball into the goal post, bringing a satisfactory look on the supporters and especially Mr. Shamsheer Ali, Hurr Ali’s father. The score at the end of this chukker was 5.5-1 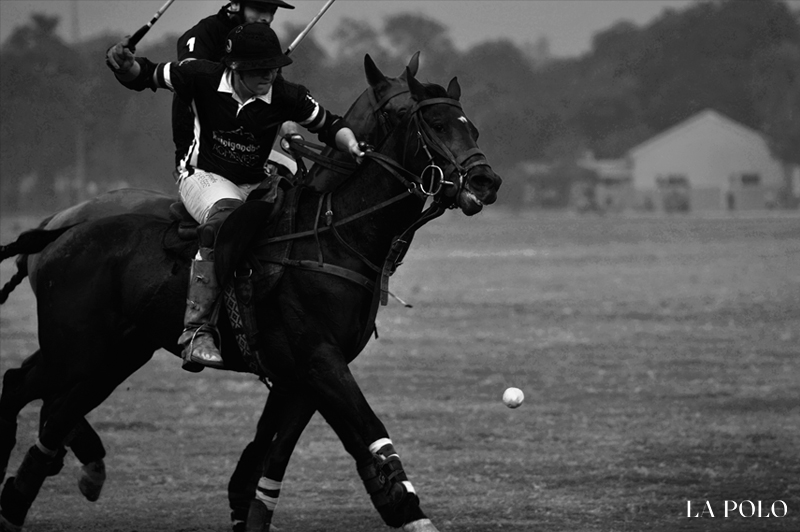 The final chukker of the match could have almost been predicted, but as the sport is, it can turn the tables anytime. But the hopes of such a change faded soon when Matthew Perry hit the first goal of the chukker. Rajnigandha Achievers now had a safe score of 6.5 against 1 of Jindal Panther, and with only 4minutes 57 seconds left. Nonetheless, as the sport of the kings it is, the opponent team was not ready to lose hope so soon. Simran took hold of the ball just after snatching it from Vandit’s grip and just when he hit the ball towards Tom, he was counter attacked by Salim, but unfortunately, Salim Azmi was also hit by the ball on his back. But begin a fit player and horse trainer himself; Salim Azmi declined any medical aid. After a little walk on the ground, he was back on the horse. The umpires blew the whistle and the match was in action once again. As soon as the match got into play, Simran shergill hit a long 60 yard shot and the ball rolled straight out of the goal post, finally securing second goal for Jindal Panther at just last 2mintues 20seconds. This was soon followed by a counter attack by Matthew Perry, who was complimented by Vandit, but Tom somehow managed to get hold of the ball even after a defensive opponent team. In just last 20 seconds, Tom managed to secure the third goal for the team. Thus, the final score of the match remained at 6.5-3 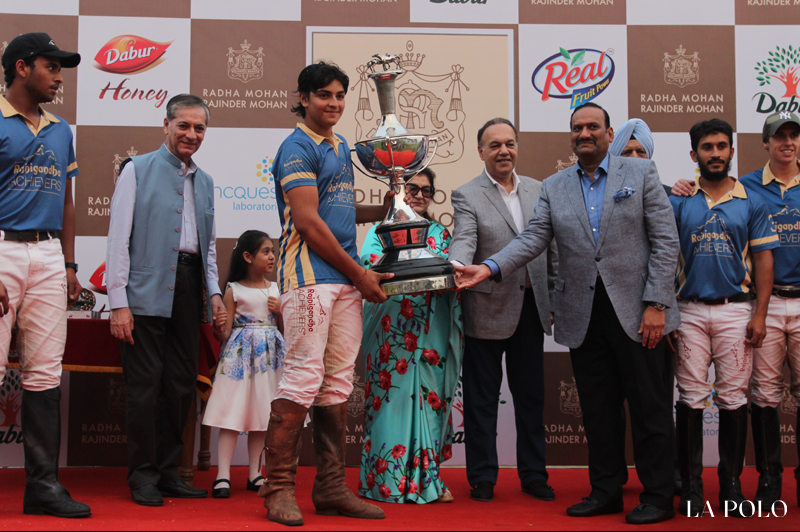 
Both the teams were later presented with awards by businessman Mr. Robby Mohan, great-grandchild of Mr. Rajinder Mohan, and Mr. Anand Burman, chairman of Dabur. This was later followed by the trophy giving ceremony to the winning team where Rajnigandha Achievers lifted the trophy in glory. This complete prize giving ceremony was done after the riding display and tent-pegging from the Cavalry. 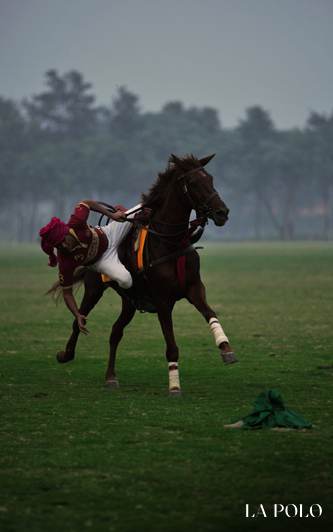 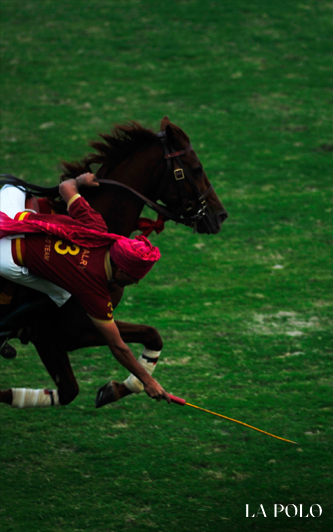