A Royal Tale Revisited | The Japanese Festival Of Soma Nomaoi

The traditional Japanese festival of Soma-Nomaoi showcases equine pride, the warrior culture of the samurais, and is an ode to a regal past that lives on for posterity to imbibe the best in terms of valour and adventure sports. LA POLO takes a trip down memory lane.


Japan has a solemn cultural disposition, with its own set of inimitable rules. The uniqueness of the Japanese culture is based upon an unflinching reverence and devotion to traditional values. Even though the popular representation of Japan either invokes the memories of the horrible world wars or the indestructible sword warriors and the samurais, Japan is home to truly captivating cultural events, and one of these is the festival of Soma-Nomaoi.

Soma-Nomaoi takes place in the Soma district of Fukushima Prefecture in the Tohoku region, known for its state-of-the-art horse breeding facilities. The region has an equine historical significance going back to the Songuku period. The festival is organised by the revered trinity of shrines, the Ota shrine, the Odaka shrine and the Nakamura shrine, since ancient times. The legend associated with the festival is closely linked to equine adventure. 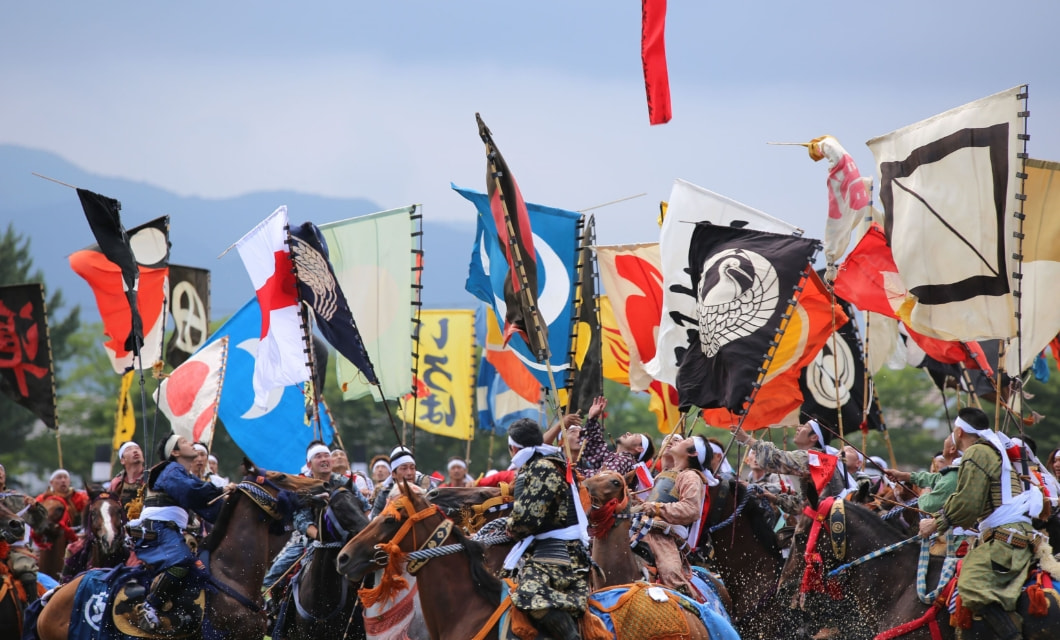 In the 10th century, the founder of the Soma clan thought of utilising the best of his stallions to train his fierce and trustworthy bands of deadly samurais. As a part of military training, hundreds of robust wild horses were set free in the plains to be captured by the soldiers. Once the horses were captured, they were offered to the Shinto god, also referred in other mythological contexts as Myoken Bodhisattva. Thus began a unique equine tradition. 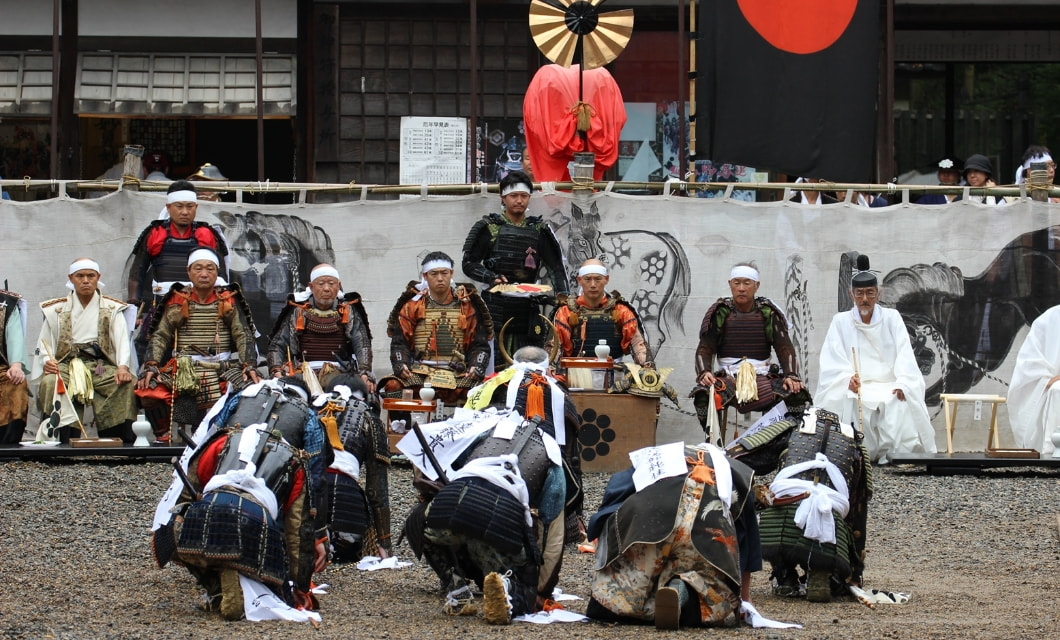 An important pre-event horse race called Yoinori highlights the quintessential Japanese culture as the horsemen are dressed in traditional attire called Nobakama with traditional tabard (jinbaori) and white headbands (hachimaki). Eight horsemen compete for a thousand-meter loop with the help of traditional harnesses and horse-riding techniques. Thousands of thrilled and up-beat Japanese spectators are enveloped with excitement. Yoinori sets the right note of traditional equine festivity, and spectators are filled with awe.

The Yoinori is followed by a monumental procession, known as the Ogyourtesu, to the Hibarigahara field, for the next event of the second day. The Ogyourtesu is a replica of how the warriors of yore must have marched across the training camps with indestructible force. Horsemen march to the Hibarigahara field, three kilometers away. Each group of horsemen carries forward a portable replica of their respective regional shrine. Around 500 samurai clad in their inherited armors march valiantly across the road. The unparalleled procession is one of the most scintillating exhibitions of traditional Japanese culture.

After Ogyoutsen, conch shells and drum beats beckon the unveiling of another spectacular event. The valiant horse race Kacchu-Keiba has the similar thousand-meter loop like that of Yoinori but the number of samurai stationed are ten. Young and throbbing samurai with their equally charged stallions unite perfectly when the traditional horse-riding techniques inherited from the Otsubo School are implemented. Their colourful and quaint attire and the long ancient banners uniquely fastened at the back of each rider are the most exciting and memorable sights any equine lover can wish to behold. 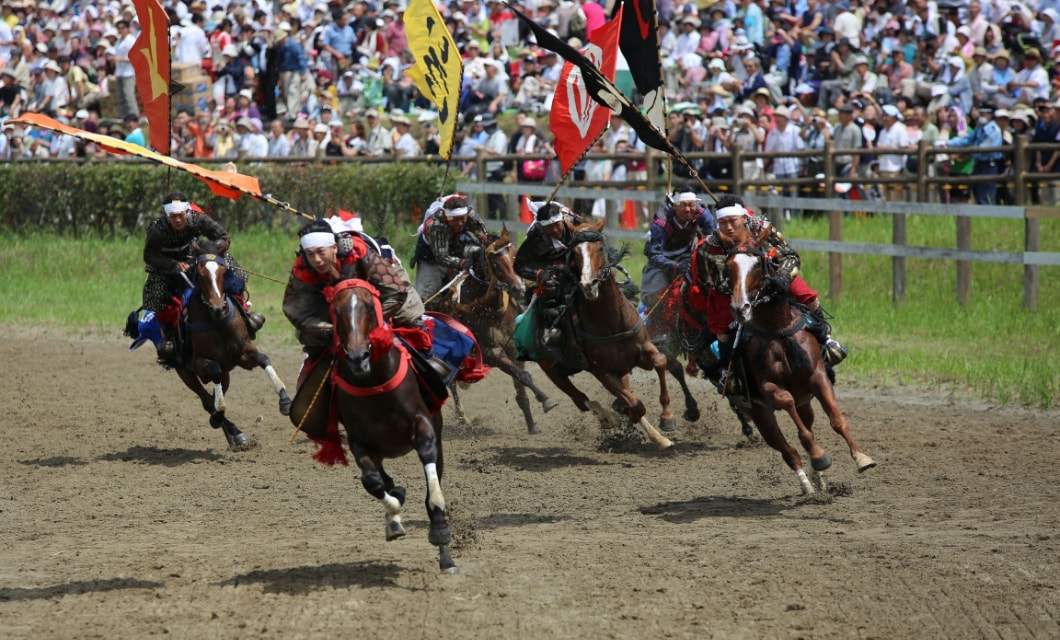 Shortly after noon, another round of drum beating and conch shells can be heard to signal another adrenaline pouring sport. From the mountain top, hundreds of samurai storm towards the open fields as two sacred flags are shot through the mouth of canons in the air. The Hibarigahara field is shaken by the constant beating of hooves of the powerful beasts as samurais are enmeshed in a relentless battle to secure the flags. The battle is won at once on the successful retrieval of the flags by the players.

On the final day, several mounted horsemen pursue the unbridled and unsaddled horses into a corral made from bamboo. The young sporting men ambush the horses clad in shiny white clothing with white headbands and present them to the Odaka shrines as offerings. With these unique equine adventures, the festival ends on a high note, bringing a glorious tradition alive. 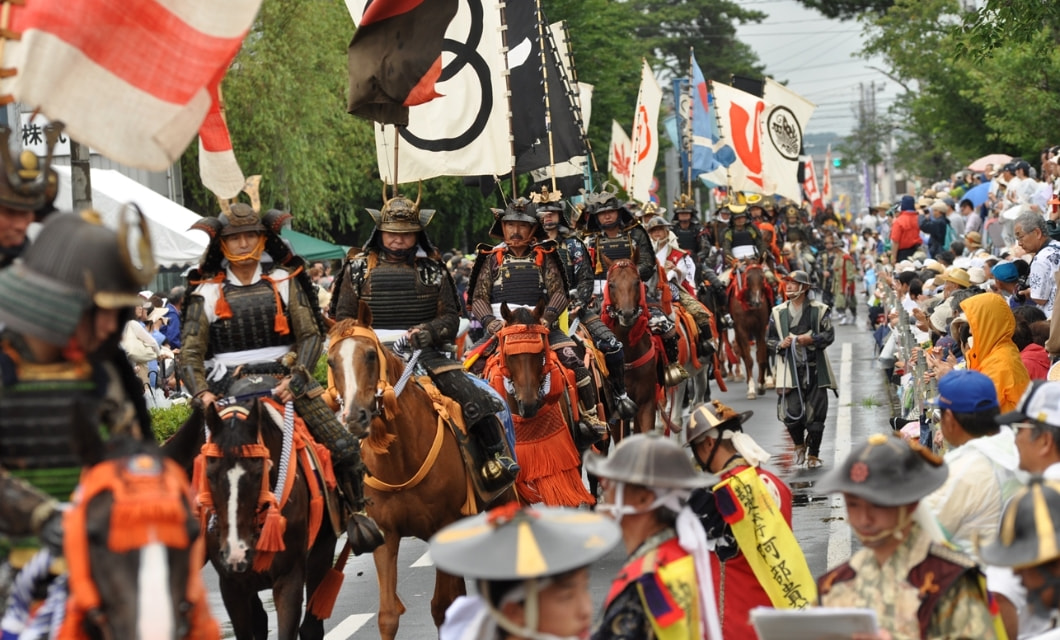