The 9th Russian Open Championship, From the very beginning of the match, both the teams were undeniably an explosion of fabulous performances from both the teams.


he 9th Russian Open Championship, sanctioned by the Russian Federation of Polo Players, bought together an extravagant bliss of Russia’s most celebrated polo players and more than a fleeting number of about 200 guests, to the canopy of Moscow Polo Club to watch the prestigious tournament and to bask in the summer sun.

From the very beginning of the match, both the teams were undeniably an explosion of fabulous performances from both the teams. The first two chukkers went radiant, the teams scored one by one, and by the end of the fun-loving chukker, the score was at 3:3. But after the second change of horses the “blue” team took the initiative – several successful attacks brought them a two-point advantage, and the players went to the break with the score of 5:3.

During the break, guests were traditionally invited to the field to participate in the strikingly delightful turf trampling ceremony. Ladies in their photogenic summer dresses and dreamy hats, had fun taking pictures and posting their portraits in social networks.

The fourth chukker started with a substitution in the “white” team: Dmitry Kozachenko stepped to the field instead of Marina Belyakova, and Ekaterina Kozachenko was replaced by Ekaterina Tyurina. However, this change did not bring the team any luck: for the rest of the game the score gap continued to widen, and the final score of 11:6 marked the ultimate victory of the “blue” team.

After the match all the players and guests gathered for a prize-giving ceremony. The “blue” Moscow Polo Club team received an honorary trophy and the title of this year’s Russia’s Champions. Gleb Fetisov who scored 4 goals was named the best player and MiniMe, his polo-pony, became the best horse of the tournament. The event was exceptional with a pinch of glitz involved. 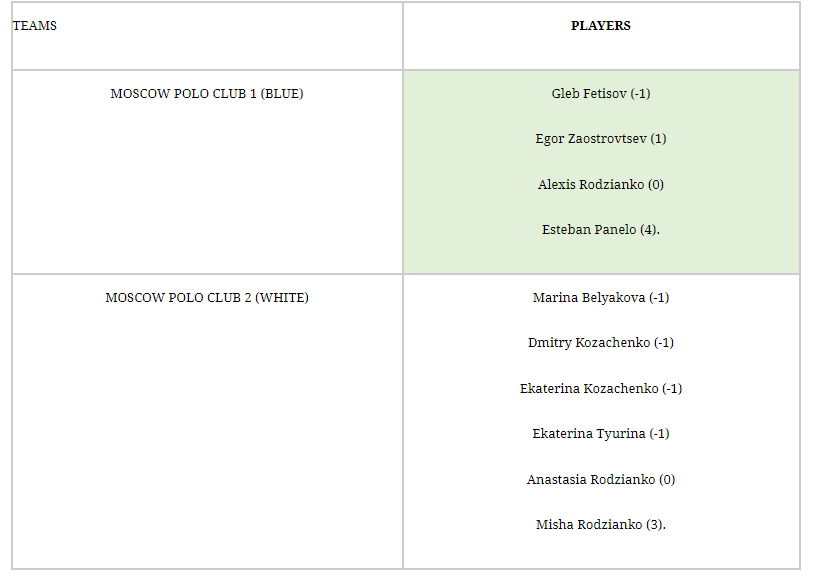