Players in action at the Thai Polo Club

Thailand’s association with polo goes back to the days it was called Khlee, and had same origins as Polo in Persia.


Upload images here: https://drive.google.com/drive/u/0/folders/1GvzRicZnfkbdlE9gbRtY2ZjVXJR6wbwP Images: http://www.lookeastmagazine.com/wp-content/uploads/2014/09/Thai-Polo-Club.jpg Look East Magazine https://www.lapolo.in/media/None/THAI_POLO.jpg http://www.lookeastmagazine.com/wp-content/uploads/2015/06/1356.jpg https://i.pinimg.com/originals/16/68/06/16680675a19f2d0152bbf6f0f3ae9b62.jpg Image caption: Players in action at the Thai Polo Club Polo | Club Earlier in Thailand, people were familiar with an Indian sport famous as Khlee. This sport was believed to have the same origins as that of Polo in Persia.

It is considered that it was the British who introduced Khlee around a century ago in Thailand in the form of Polo. In 1890, His Royal Highness Krom Luang Devawongse Varopakarn, the Minister of Foreign Affairs, accepted the proposal of an Englishman, Franklin Hurst, for setting up a racetrack and a sports field in Bangkok. While a further need for improvement was felt, Hurst rented a piece of land in Sra Pathum where the occasional horse races, gymkhanas, cycle races and polo matches were held. This sporting area later became the Royal Bangkok Sports Club.

There are certain narratives that show evidence that Polo was played at the Pramane Grounds (Sanam Luang) before the 1920s. It was in 1924 that the Bangkok Riding Club leased a plot of land off the Wireless Road from the Crown Property Bureau. This later came to be known as the Bangkok Riding and Polo Club, where various equestrian sports were played. One of these was polo and was known to have been played three times a week. Polo matches also took place in the north of Thailand, at the Chiang Mai Gymkhana Club. This Club was founded in 1898 by the British residents of the northern city as well as Lampang, Nan, Phrae and Nakhon Sawan.

However, Polo suffered a setback and saw a decline in its popularity at the time of World War II as many foreign patrons had to leave the country and hence clubs offering polo facilities started to decline in membership.

In 1998, the 13th Asian Games Bangkok acted as a complete turning point. As the people of Thailand rejoiced in the victories, the Sport of Kings gained unprecedented support. This can be attributed primarily to the dedicated and passionate group of Bangkok expatriates. 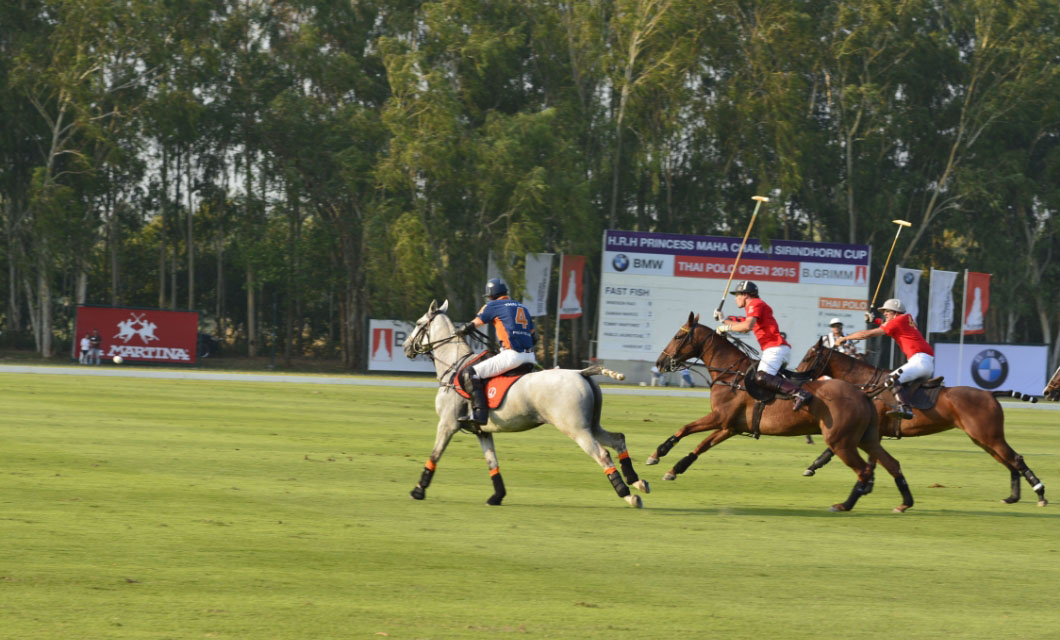 As the people began to understand the sport and developed a sense of fascination, they began committing their time to their passion for the game. People showed more enthusiasm in learning about the rules and regulations. Players were travelling throughout Europe to compete in international tournaments.

Starting from 1994 at the Bangkok Equestrian Centre, to the first outdoor polo field and club at the prestigious Siam Polo Park, the sport has rightfully gained the royal seal of approval.

The Thailand Polo Association was founded by Vichai Srivaddhanaprabha in August 1998. It was given a national status as the Thailand Polo Association, on January 14, 2004, officially registered with the Sports Authority of Thailand. Vichai founded the Association with the ambition to popularise the sport in Thailand and to develop the skills of the players in the country in order to be able to compete successfully internationally. This provided a major boost in establishing a firm base for polo in Thailand.

The Thailand Polo Association has organised and supported tournaments in Thailand and has sent local players to several international competitions, including the South East Asian Games.

The objective of the association is to help promote the sport and increase awareness and interest on an international scale.

Elephant Polo in Thailand was promoted by the Anantara Resort which, in 2001, held the first King’s Cup Elephant Polo Tournament at its resort in Hua Hin. Between 2006 and 2010, the tournament was held at the Golden Triangle in the north of Thailand. But in 2011, the game moved back to Hua Hin. This event turned out to be a huge publicity effort by the Anantara Group and several well-recognised brands sponsored the tournament. A number of international as well as local celebrities were spotted in the VIP stands. The money raised was donated to numerous organisations that fight for and are dedicated to the protection and preservation of the Thai elephants. 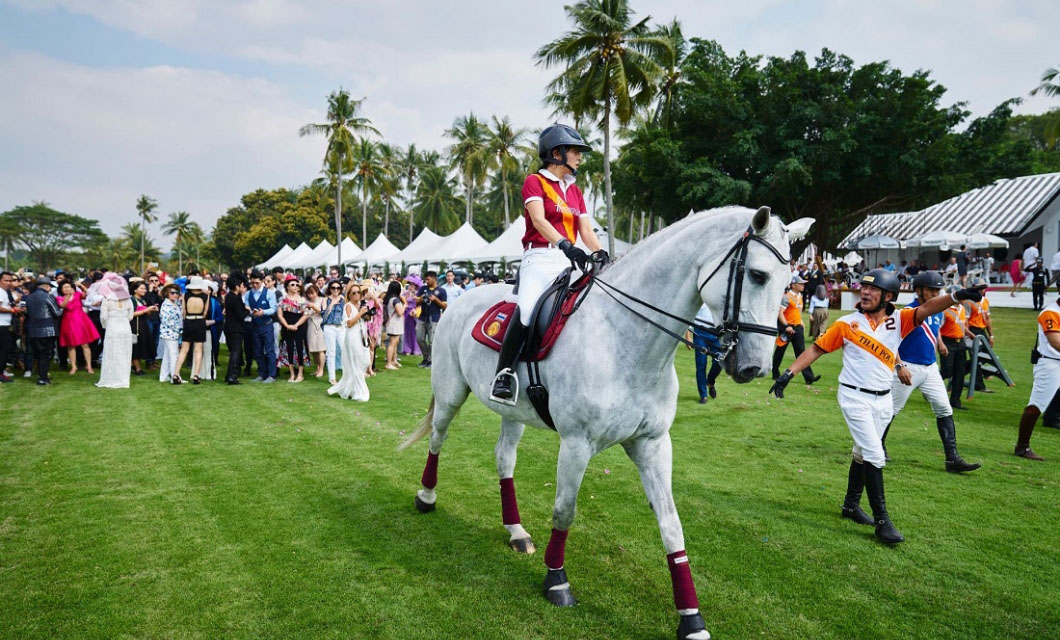 The rules in Thailand for elephant polo, varied slightly compared to those of Nepal, another place known for hosting elephant polo. In Thailand, a polo game lasted for two seven-minute chukkas or halves as opposed to 10 minutes in Nepal, and also a 15-minute interval when the teams changed pitch ends. The teams were made up of three (or four) elephants, and each of the pachyderms had both a player and a driver riding on its back and neck. The playfield--100 x 60 meters long with two goal-mouths.

Polo on elephant mounts is a rare sport. An elephant of any height, weight and sex can be chosen to participate in the game. In order to replenish their energy and make the animals strong for the game, the animals must be fed with sugarcane or vitamin-packed rice balls during recess time. In contemporary times, the game was played with a standard polo ball but in the ancient past, elephant polo was played with soccer balls which the elephants liked to stamp on and burst.

The game was played while riding the elephant, the player instructing the mahout which way to steer the elephant. To turn an elephant left or right, the “drivers” used an elephant goad, a hook attached to a short stick. The hook was used to pull at the elephant’s ears, and the elephants turned either left or right depending on which ear is pulled at. The ears of the elephants would be frayed from all the pulling that they suffered.

Elephant polo starts in the centre circle when the elephant-riding umpire throws the ball between the two opposing elephants and riders inside the ring. At least one elephant, during the play, must remain in each half at all times. This measure was taken to avoid elephants from bumping into each other. If a player happened to fall off its elephant or the stick is broken, the game was stopped and restarted with a throw-in.

END TO ELEPHANT POLO IN THAILAND

King’s Cup Elephant Polo was played three times a year in Thailand, Sri Lanka and in Nepal. In each match, two teams competed against each other. Each team consisted of five men and five elephants. Sponsors included Johnnie Walker, PWC, Peroni and IBM. However, PETA claims that at least eight other corporate sponsors have ended their support for the event due to its allegedly inhumane nature.

PETA has called elephant polo as cruel and barbaric. Allegations of animal cruelty surfaced in Thailand during the 2018 King’s Cup Polo in Thailand. The Thailand Elephant Polo Association announced in October 2018 that it will end polo matches in Thailand.