Through all its modifications, LeCoultre has kept its legendary roots intact and never fails to excite customers with innovation!

JAEGER LECOULTRE’S REVERSO: SUSTAINING THE STROKE OF THE MALLET


Polo is the epitome of elegance. But only professional players truly understand the extremities of the sport. Players require accessories, like watches which promise durability. Jaeger LeCoultre’s legendary watch Reverso arose out of a similar practical requirement. The name Reverso, in Latin means, “I turn around”.

In 1930-31 winter, a group of polo players went to Swiss businessman and watch-dealer Cesar de Trey, asking him to create a time-piece that could withstand the brutality of the polo mallet. After applying his genius into the making of this historic watch, he sent the request to Jacques David LeCoultre. The French designer, Rene Alfred Chauvot, who was vested with the task of the development of this new watchcase dropped the usual idea of applying a protective grill on top (a technology that was used for the WW1 military watches) and instead curated a reversible case to protect the dial and glass of the watch.

Trey returned to Paris, where he partnered with Jacques David LeCoultre, owner of the LeCoultre Manufacture at that time. They sought to find a solution to the challenge made to him and contracted French designer, Rene Alfred Chauvot, the actual inventor of the slide and flip mechanism.
The immediate idea they concluded upon was a watch that could flip the case around. The ingenious Reverso with its rotating case was created on March 4, 1931, in order to prove handy for polo matches. The dial could be firmly protected by reversing the case, and with a back that assured protection of the dial from brutal mallet strokes. It bore tracks on the top and the bottom of the case which allowed it to be popped out and innovatively titled up like the cover of a book, slid across the tracks, and flipped over. 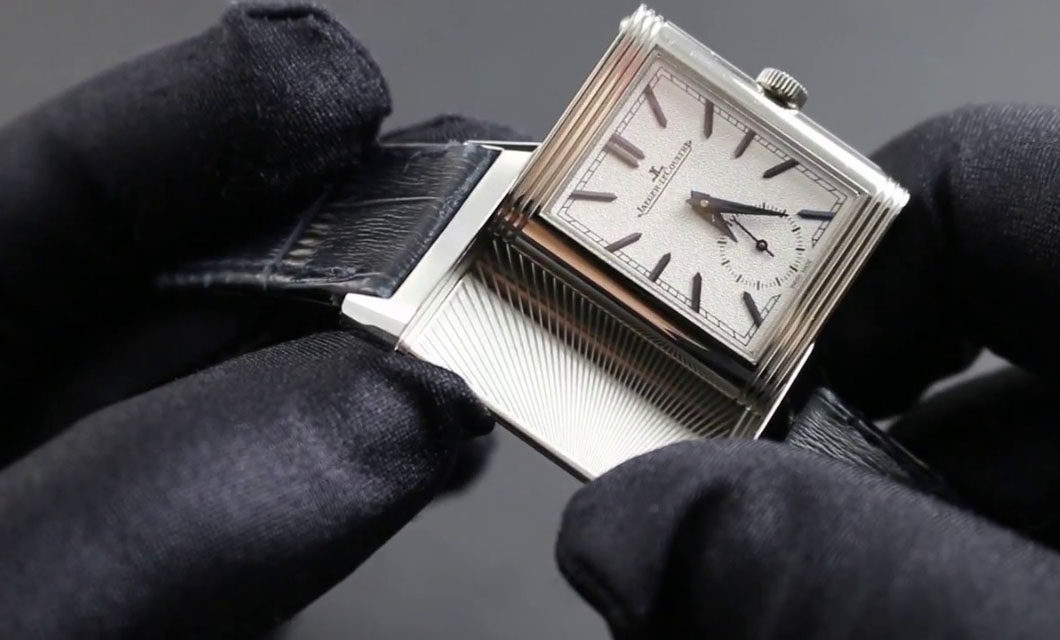 
One side was designed with valuable crystal made of glass; the other had plain, unadorned steel that could take a beating. It was one of the first sport watches created to ease up the roughness of polo for players.
The manufacturing house of LeCoultre applied a concept to watch-making which allows the wearer to be able to slide out of its frame and turn around completely. With the assistance of grooves, pins and a locking mechanism, the central part of the case could rotate 180 degrees.

The rectangular timepiece is the most iconic model of Jaeger LeCoultre. On March 4, 1931, Rene Alfred Chauvot officially patented his invention of a wristwatch which can slide on its base and flip over on itself.
With an aspiration to bring to the world new aesthetic values, the case of the Jaeger LeCoultre’s Reverso watch draws inspiration from the Art Deco style. It can be seen as a symbiosis between form and function.
With the face of the Reverso designed with three emblematic gadroons, it creates a muse for beauty for both men and women. While the male models boast masculinity through complexities and aesthetics, the women’s watch reflects femininity with jewelled models.
The watch leaves ground for personalization on the single-sided models. On turning the case, the other face of the watch is like a blank space which can be embellished according to personal touch. 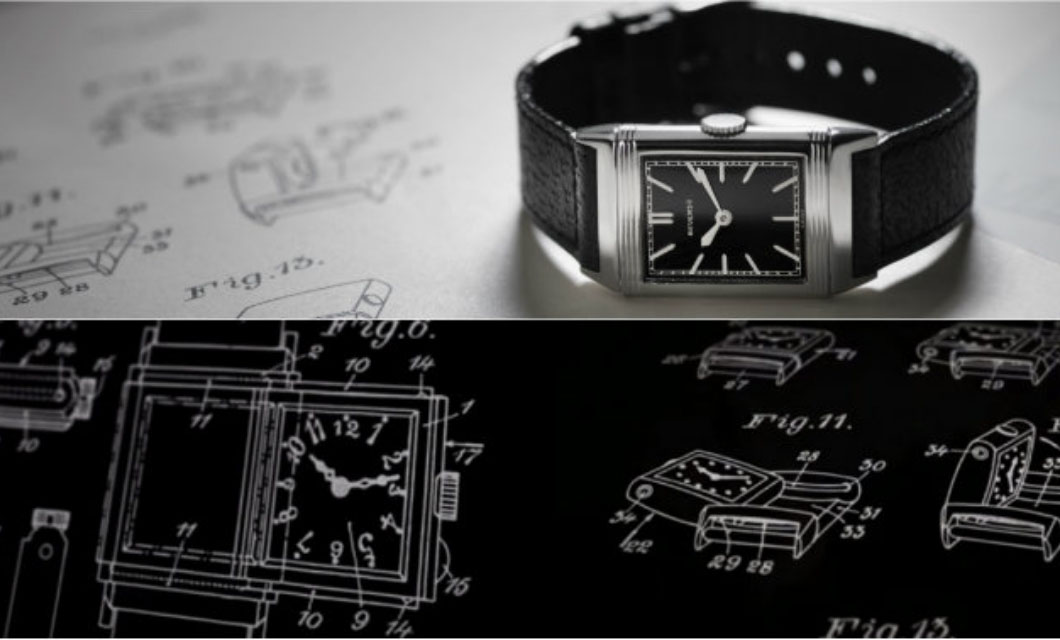 
It is not only the case that calls for craftsmanship, the straps of this iconic watch too are made of the same leather used in the making of polo boots of Casa Fagliano founded in 1892 by Pedro and Giacomina Fagliano.
Grande Maison went ahead to apply a twist in its watches by initiating the idea of two faces. The reverse side was embellished with an enamelled miniature of a painting representative of iconic style. This tribute enamel was inspired by the ink wash painting of Xu Beihong who was one of the most renowned Chinese painters of the 20th century. His representations of horses made him very popular in China and hence his work was best suited for the luxurious requirement of the watch. The original painting of the horse which is over 5m wide shows 10 horses galloping through a natural Chinese landscape. The enameller was inspired by the representation of two horses from the painting.
The miniature too has its own set of complications. The sense of movement, the fluidity and the lightness conveyed by the ink-wash technique had to be reproduced despite the protective layers of the enamel which reduce the image’s spontaneity. As such, the artisan spent hours finding the right movement to be able to represent the horse’s energy at its best. Moreover, working on small details such as the horse’s manes required the touch of an artistic master. Lastly, working in monochrome is another challenge for an artist such as an enameller who is used to playing with colors.

Over time, the iconic Reverso developed into a status symbol, seen on the wrists of kings and celebrities. Bruce Wayne, famously known as Batman, wears it in The Dark Knight Rises in 2012.
As a watch which was almost a century ahead of the existing trends, the Reverso proved to be the watch polo players had envisioned and became a success of LeCoultre. It made a historic place for itself in enthusiasm for luxury watches not only for those who created the demand, but all who exhibit an enthusiasm for iconic watches. Thereafter, LeCoultre went ahead with designing a complete collection with the help of famous polo players, skiers and racing drivers, who brought fame to the Reverso as the ultimate luxury sports watch.
The Reverso gained popularity when customers like Melia Earheart and Kind Edward VIII showed interest in the watch. The pivot case did not just assure protection to the watch, it added an element of luxury with the little blank space left for engraving whatever its customers wanted. Demands exhibited wide varieties in illustrations and complicated designs for the backside of the Reverso. Amelia Earheart engraved the itinerary of her first flight on the back of her piece.

The original reverse case was 38 mm long, 24 mm large and 6 mm high, the same size as today’s Reverso Classique. The dial of the original model featured only hours and minutes hands. It was in 1934 that LeCoultre introduced a new version with a small seconds counter at 6 o’clock. 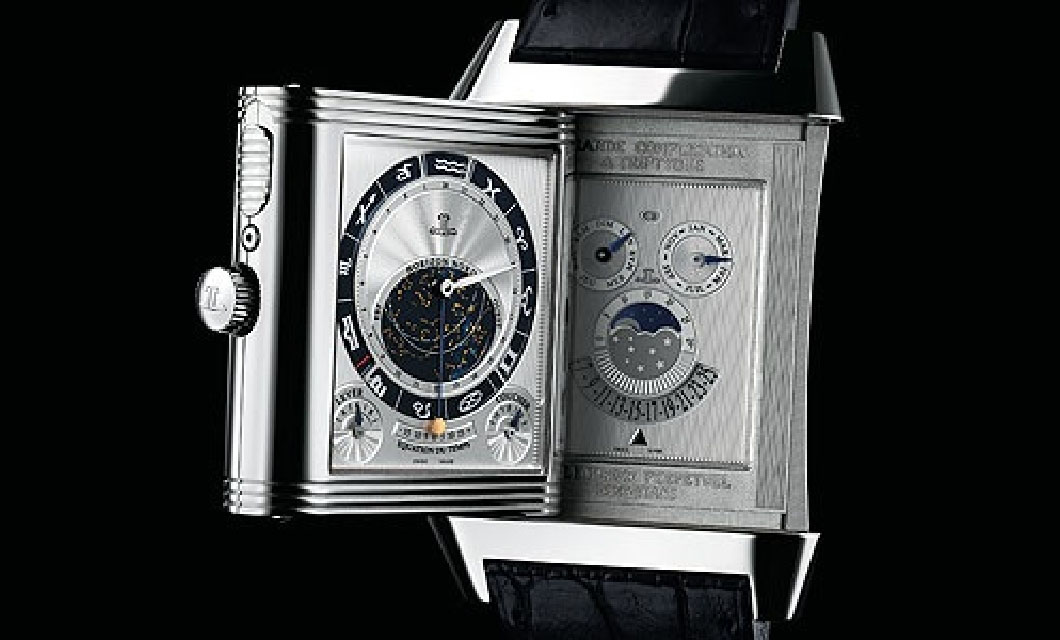 
The backs of reverse watches began to be personalised with engravings of enamel miniatures from the year 1931. Unfortunately, after WWII, with trends switching to round watches, the symbol of the art deco of the Reverso was somehow disregarded compared to previous years.
One of the rarest creations that was found on the Reverso was the portrait of a beautiful Indian lady, probably a Maharani, whose story remains one of the best kept secrets in the history of the watch.
In 1985, reverse created the first ever-water resistant reverse case. This required a complete makeover to offer unprecedented wearing comfort and guaranteed tool security in pivoting.

Every time, the Jaeger LeCoultre collection expands with exciting features. Their collection now comprises the Garnde Reverso 976, a watch that promises more masculinity and a see-through case-back that allows one to gaze at the hand-wound movement. On the other hand, is the Reverso Classique which is the only reputed quartz edition of the men’s collection.
The Reverso is known for modifications comprising enhanced complications every time. Its Grande Date consists of a day and night indicator and displays the date on the front and a second time zone. Not only this, it also has a GMT complication and a power reserve for eight days on the backside.
Reverso has the Grande Sun Moon which has a hand-wound Calibre 873 and comes with an 8-day power reserve. The front displays the moon phases and a day and night indicator. The case-back in sapphire elegantly shows off the hand-finished movement embellished with jewels, a blue screen that represents the celestial sky.
On the 75th anniversary of the Reverso, Jaeger LeCoultre came out with a new version of the Squadra collection. Named after its square shape, the collection has a sporty outlook and has a generously-sized case with 50.5mm x 34.0mm. This collection emits an essence of connection to polo. This collection is enhanced with Squadra Hometime, a GMT watch with a day and night indicator and the automatic Calibre 977. It has been fitted with a Squadra Chronograph GMT with a second time zone. It is a limited-edition watch with a world time indication on the backside of the titanium case.
The Reverso had already developed on a completely rare idea of comprising two faces in one watch. But the Reverso Grande Complication, a Triptyque, is a watch developed after four years of work, is a step further introducing the concept of three dials. This exceptional timepiece has three different dials for three different groups of indications - normal time, sidereal time and perpetual calendar. The Grande Complication movement allows 19 indications spread over three dials and is made of 642 parts. This watch is a limited-edition of 75 pieces. 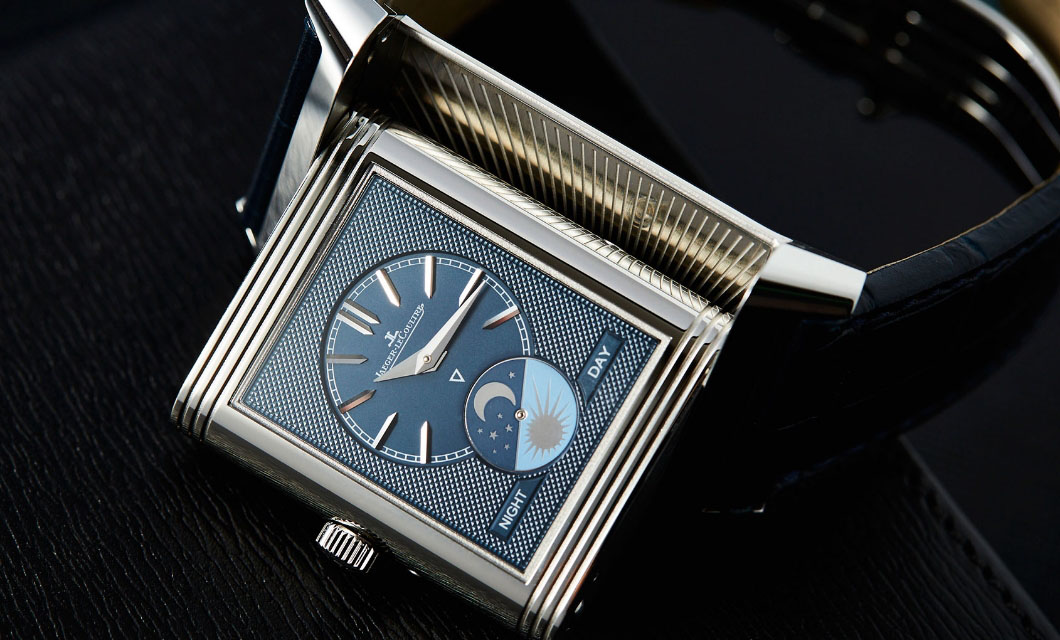 
A hundred years later, on its 175th anniversary, Jaeger LeCoultre presented the Gyrotourbillon, for the first time in the square case of Reverso. The spherical tourbillion is made of a rare chronograph with an outer cage that rotates in three minutes.
However, keeping every comfort in mind, though most of the Reversos are equipped with hand-wound movements, the collection also displays the Grande Automatique with Calibre 970. This watch features an outsize date, a GMT display and the regular day and night indicator for added luxury.
Reverso celebrated its 80th anniversary in 2011 with models that were intertwined in their tradition. The designs are timeless with an array of elegant dials and the trademark reversible case that offers room for either individual engravings or even insights into the mechanics.
LeCoultre never fails to excite customers with innovation! The anniversary collection includes a particular authentic reissue of the first model from 1931, as well as their technically outstanding minute repeater, the Reverso Repetition Minute a Rideau proving to be the forever pioneer in creating cult objects. Through all its modifications, it has kept its legendary roots intact.