Goose Creek opened the Molina Cup with an exciting 8-7 victory over Beverly Equestrian on the Opening Day of the Molina Cup. This was after losing several 20-goal games by one or two goals in the first two months of the winter season.

Brennan said, “It didn’t feel good going into the sixth almost tied, I thought, oh no, not again”

“It feels good to win here no matter what, especially after our down streak.”

“In those games, we weren’t losing by five or six. It was the same deal, win all the way through and then blow it at the very end. Today was good for us.”

Starting off strong, Goose Creek shut out Beverly Equestrian in the opening chukker, 2-0, and took a 5-2 halftime lead and 7-2 advantage midway through the fourth chukker.

“When we get the ball and move it, that’s when we feel better,” Brennan said. “It’s when we’re at midfield and we stop it, that’s when it breaks down a little. That’s what feels good for our team, just the movement.”

With three astounding goals by Arellano, Ballhaus and Inaki Laprida to trail by only two, 7-5 Beverly Equestrian made the much-needed comeback. Arellano added another goal with 2:08 left in the sixth chukker to cut the lead to one.

With Del Rio hitting a nice neck shot to Brennan that turned out to be the winning goal at the 5:09 mark, after Inaki Laprida scored with 1:27 left in the game.

“That was a very important goal, she scored with a good pass from Tomas,” Mariano Gonzalez said. “I hit a long back shot, Tomas jumped on it and passed a perfect long shot.

“We were so unlucky that he passed a perfect cut shot to Maureen again and the ball was going at a perfect angle for her to finish it but it hit a divot and went to the left. She got it but it was without any angle and we would have been up by three.”

Turning on the defence, Goose Creek moved the ball, consuming the time to protect its lead.

Brennan quoted-
“All those last moves were all by getting it and hitting it and maybe bad luck or bad bounce here and there,” Brennan said.

Goose Creek established a balance, scoring from its line-up. Mariano Gonzalez scored three goals followed by Brennan and Peke Gonzalez scoring two goals each and del Rio with one.

“We have been playing well and most of the games we were up by one or two or three goals in the last chukker and we lose the games,” Mariano Gonzalez said. “Today we were ahead. But it is the typical thing like Tomas hitting a perfect neck shot and it hits a divot and it goes out. That little difference is least luck in the end. Inside you are going, give me a break, just one break”

“We fought hard. The other team is a very good team. The brothers have been playing together forever. We are happy we were able to finish ahead.”

Goose Creek’s horses were coming off a 10-day rest. 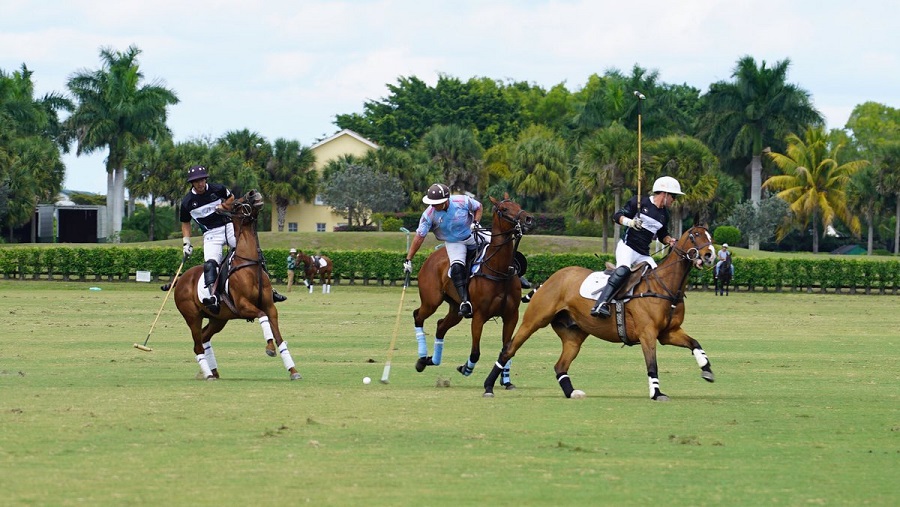 “It means a lot to win a game by one goal,” said Peke Gonzalez, who recently turned 18. “With all the bad luck we had in the other tournaments, it’s nice to come back and win. Maureen made two great goals, very important ones. One in the beginning, nice to start with the confidence and winning the last goal. Tomas and my dad played really well, that was great. They were a very good team and it was a very important game to win. It’s awesome.”

“It’s nice that there is 20-goal in March instead of being done the last day of February,” said Brennan, who will remain through April and participate in the April 5-8 WCT Finals hosted by Grand Champions.

The Molina Cup, a first-year 20-goal tournament, comes on the heels of the successful and historical 20-goal Sterling Cup won by Travieso,

A star-studded line-up of some of the world’s top players from six different countries is being showcased by the two-week Molina Cup.

The 120-year-old handcrafted silver Molina Cup trophy was given to Marc Ganzi by Alfredo Molina, Chairman of the Phoenix-based Molina Group and owner of Molina Fine Jewelers.